October Wargames member Mark who is of the Ghar Empire has shared his account of his first game from Month 3 in this article!

I’ve played about 8 games now at 500points and my initial thoughts on it being similar to bolt action have been shattered. There are lots of nice little rules that make it very different. I’m still coming to terms with needing to role low as opposed to high, and have more than once celebrated rolling a 10 for a save, much to the upset of my Ghar battle suits.

Some of the rules I really like are the hit modifiers and no wound roll. I found this a little confusing at first having mainly played other systems where you hit and wound but I think this works well after all once you have been hit its your armour that protects you. The way saves are taken has impressed me too, once you have more than one save per model in the unit, you start rolling on a per model basis meaning that sometimes only a single model dies as they failed multiple saves that everyone else passed. Commanders having a reroll on saves are also a nice touch but I think it has resulted in my squad leaders being allocated an above average number of hits! 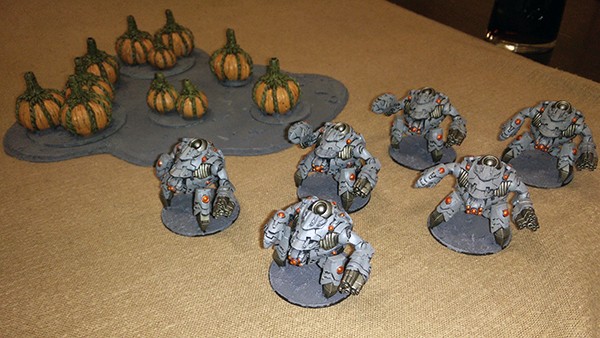 I also really like the changes to rally and down orders making them both more useful that in Bolt Action and adding an element of risk to going down and not getting back up. There are so many little rules that work well with each other it seems like a very well thought out rule set. Reactions are a particular example of this where you can try to take an out of sequence turn in response to your opponents actions, I’ve had this work both for and against me with an Outcast squad firing back at a disruption cannon with firefight resulting in both being wiped out and a battle suit squad failing the reaction test and further pinning themselves forcing a break test.

The game plays well and is fairly quick at 500pts you get enough for a feel of the game but not so much you lose track. Reference sheets were really helpful but I think my biggest complaint was the lack of an included index in the rule book meaning we needed to reference a separate index to look up rules. The armies all seem different too which is nice though some do seem harder to play than others. Though this evened out was we got more experience and started playing the scenarios. 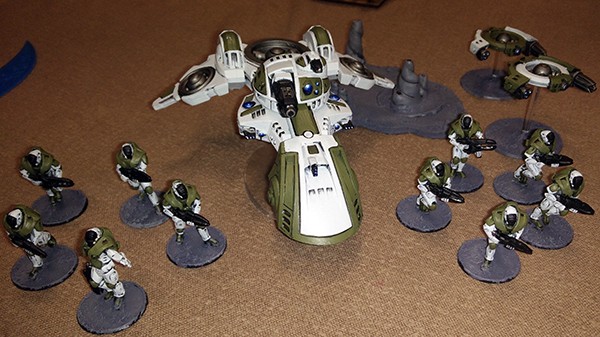 But enough of the rules, what about the Ghar? Overall I’m really impressed with the army, I love the battle suits weapon options, having the flexibility to swap guns for the situation is brilliant, the disruption blast is great for pins and Rapid fire handy for making casualties, I haven’t used the lance mode much but the extra range has been handy to knock out an x-launcher team at the back of the board who thought they were safe. Plus plasma amps for boosting the number of order dice they get at key points is very handy. I really enjoy activating my plasma amps and then firing disruptor shots and scourer cannon shots to inflict 3pins and casualties on a unit all in one turn, if I’m especially lucky it’ll result in a couple of break tests too. I have also used the first dice to rally and remove pins and the second dice to attack something that expected to be safe from the Ghar unit with multiple pins on it.

Assault suits also have served me well, with only ever having lost one combat (lesson were learnt about starting a charge when you already have 3 pins on your own unit!). The only downside being the near inability to assault anything in dense terrain due to the brilliantly low agility, there have been several turns where they are stood next to the terrain, too close to fire gouger guns but unable to move in due to failing that agility test. 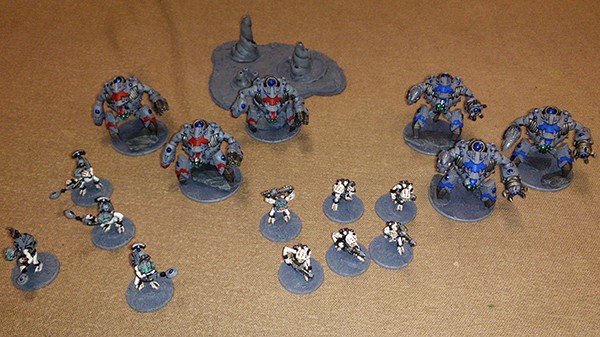 With both suit units I really feel it when I suffer a loss, the armour save is great but casualties still happen and really impacts on my force. What’s worse is pins equalling my unit size and making me take break tests! I think I might need to increase to 4 suits a unit where I can to help mitigate this as at the moment its 3 pins and I start needing to test.

Tectorists are the star unit of the army, super cheap and able to absorb that distort dice with little effect. The reroll is also really handy for weapons like disruptors or gouger guns where all I need is the hit for it to have a big impact on my opponent be it down or double pins.

Outcasts are the fodder of my army, cheap and prone to dying in the hundreds (well they would if I had more than 7) but at the same time surprisingly brilliant. The lugger gun isn’t much on paper but the quantity of shots the unit can put out is fairly impressive, and when combined with reactions like firefight they have been known to take things down with them (not impressive things yet but every little bit helps), there real help comes from the high agility and small base size allowing them into terrain where my suits can’t reach.  Definitely want to keep building and playing with the army and can’t wait to add things like command crawlers and bombardment cannons.

For my next 250 points I plan to add a command crawler for some extra firepower, 2 more order dice and to allow me to take more options at higher points. I will also have a few points left over which will allow me to either add some plasma dumps to my assault team or get a plasma amp for the crawler. 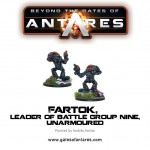 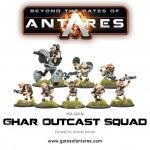 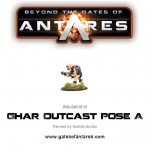 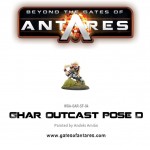 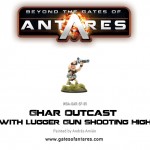