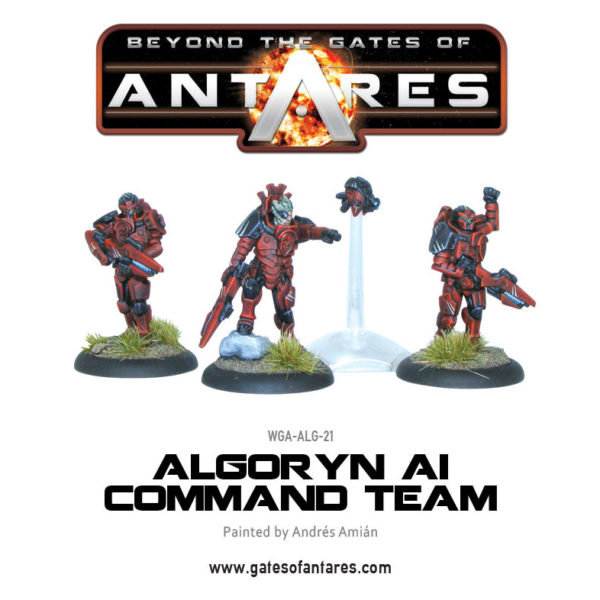 The Algoryn military is one of the most efficient and effective fighting forces in the entirety of Antarean Space. The whole of Algoryn society is geared for war and survival in a hostile universe.

The Algoryn Command Team blister contains one A.I. (Armoured Infantry) Commander, clad in Reflex Armour and armed with a Plasma Carbine and wrist-mounted Micro X-sling – accompanied by a pair of A.I. Troopers with deadly plasma carbine, and a Spotter Probe. 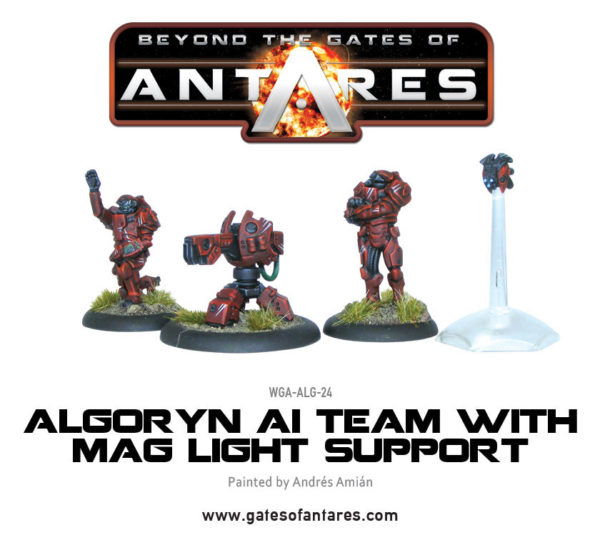 Magnetic weapons (or ‘Mag Weapons’ for short) propel a metallic, metal-coated or metal-cored projectile by means of a powerful magnetic pulse. The projectile itself takes the form of a spike, needle, sliver or plug. Small Mag weapons are fed by a magazine, however the larger, more sophisticated weapons carry their ammunition inside of an inbuilt compression field which is capable of carrying thousands of rounds – these larger weapons are also able to synthesise their own ammunition from an integral HCM (Hyper Compressed Material) core given a few hours. 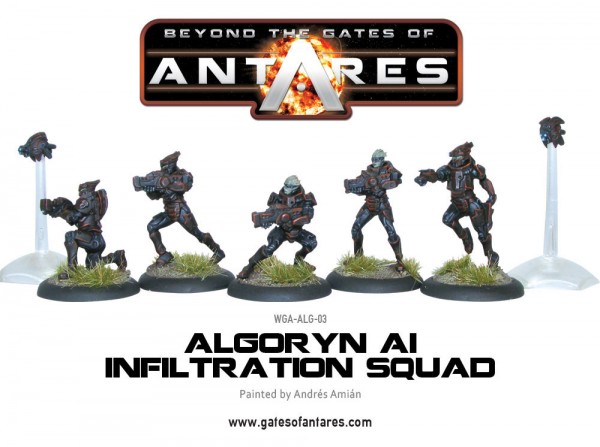 Armed with Mag Repeaters, Infiltration Squads are able to launch a devastating burst of fire at close quarters. Exclusively recruited from Algoryn females, they employ stealth tactics to take enemies by surprise, emerging with all guns blazing – their deadly hail of fire rarely missing it’s mark.

The Algoryn A.I. Infiltration Squad contains one A.I. Leader with Reflex Armour, a Mag Pistol, and a Micro X-Sling, who is accompanied by 4 A.I. Troopers with Reflex Armour and Mag Repeaters, and 2 Spotter Probes. 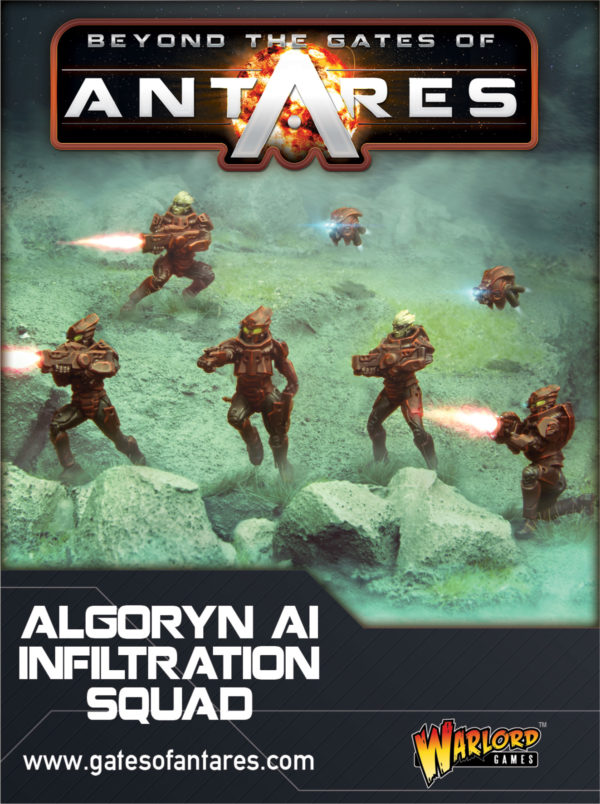 There are millions of independent human worlds belonging to small, self-governing empires or federations. Some of these societies are relatively primitive whilst others are as technologically advanced as those of the Concord and Isorians. The Algoryn Prosperate is one of the larger and amongst the most advanced of these independent federations. It is unfortunate to lie upon the Antarean borders of three great rivals: the Panhuman Concord, Isorian Shard and Ghar Empire. Whilst the Concord and Isorians ultimately pose the greatest long-term threat to Algoryn independence, all three civilisations benefit from peaceful trading contact. The Ghar, however, are implacable foes: evolved from genetically engineered slave-soldiers in ages past. The Algoryn and Ghar have been engaged in unremitting warfare for hundreds of years.

As a result of this unending battle for survival, every aspect of Algoryn warrior culture is focused upon martial endeavour. Every citizen is a warrior in a society where service and duty override everything else, and where the greatest honour of all is to serve in the elite Armoured Infantry. Strict segregation of caste and gender is a characteristic trait of Algoryn society and military. Engaged in constant warfare for hundreds of years, the Algoryn are naturally amongst the most battle- hardened troops in all of Antarean space.

The Prosperate’s homeworld of Algorya lies at the centre of twelve substantial colonies, numerous outposts, several staging planets and a few allied worlds occupied by other panhuman species, which altogether comprise the mutual trading and defence pact called the Prosperate. The Algoryn themselves are panhumans of distinctive appearance. They lack hair upon their heads, which are instead covered with crest-like keratinous growths. Similar nodules of keratin form a thick scaly layer upon their necks, shoulders and forearms. This dense protective layer shields the Algoryn against the harsh rays of the twin suns of Algor, which periodically bathe their home planet in dangerous levels of heat and radiation.

Algoryn troopers are less lavishly equipped than the Concord’s shock troops or Isorian Shard phase troopers, but their weaponry is practical and effective, honed by years of warfare like the Algoryn themselves. Troopers are generally armed with mag guns, with only a few carrying heavier plasma based support weapons. Algoryn troops are protected by reflex shields mounted upon metallic plates: a useful general- purpose armour that is both sturdy and reliable.

View the Algoryn in Store

Algoryn99 Antares111 Beyond the Gates of Antares594