Antares Fiction: In To Darkness, The Belly of the Beast – by Andrew William Tinney 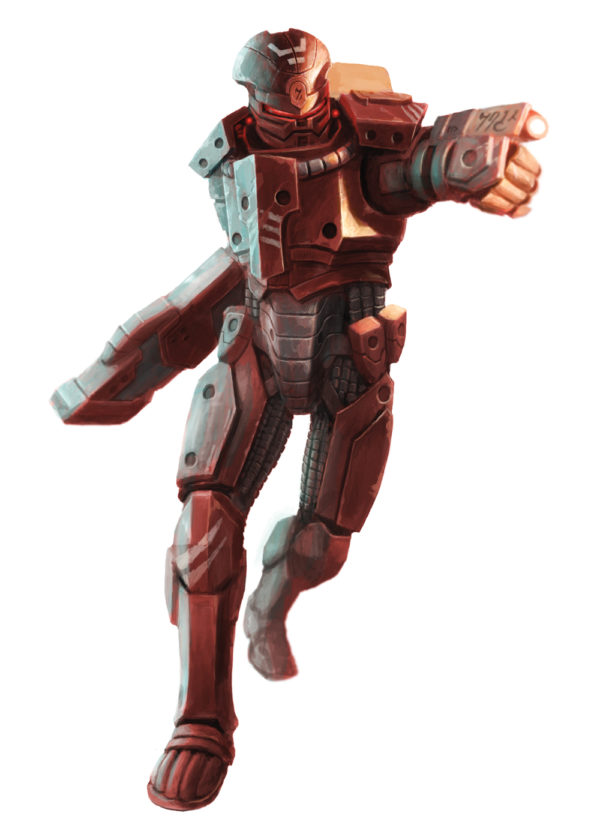 A maelstrom of ash engulfed them. Kale’s visor flickered with static as the tunnel entrance cascaded down, shutting them off from the Boromites and the desolated planet beyond. She switched to night vision and the darkness dissipated into an emerald glaze, flecked with the hazy outline her remaing squad; Gestra, J’ko, and Ghalris whose severed arm was being cauterised by his armour, the dull hiss of the sealant masked by his groans. Without the antagonised shouts of Boromites could still be heard. And Byris’s blood would be soaking into the hard, radiated earth.

“Move out,” Kale called, hefting her mag gun and turning towards the tunnel interior. She had scooped up the weapon from the dead body of Maynn, comforted that she would now avenge his death with the fallen warrior’s weapon.

“Move where?” grunted Ghalris, his voice cracking as his armour finalised the sealing process. The bleeding had ebbed away, the sophisticated stemming system of his battle armour slowing circulation. He was alive, but Kale feared for him, for his blood had been exposed to a heavily irradiated atmosphere.

They adjusted their visors to low light conditions, the scene turning from pitch black to a collage of greys and whites. Gestra took the lead, setting a cautious pace, treading down the tunnel which meandered deep into the mountainside. The crude rock had been meticulously carved away, support beams HMC placed at regular intervals. The Boromites had been there for some time, Kale surmised. But why…

“You’ll survive,” Kale said. She approached him, glanced over his wounds, and, satisfied, grasped his shoulder firmly. “I’ve seen worse,” she encouraged, “you’ll live.” As long as radiation hasn’t seeped into your bloodstream, she wanted to add but knew that would do no good. As much as Ghalris irritated her, he was a member of her squad and it was her duty to keep him alive.

Just as she should have kept Byris alive.

She shook those thoughts from her head. Byris would be mourned, as would Myann and Usta. They would also be avenged, she vowed, drumming her fingers on the handle of her mag gun. Dust trickled down from the ceiling, a continuous torrent of grey cloud seen through their visors. Gestra slowed. Kale marched to her side.

Kale said nothing. The heat signals were odd, very odd. Instead of the normal human sized silhouettes of enemy soldiers, the signals returned as lumps of red, blipping briefly before flickering away only to return after a series of seconds. They were moving, slowly and in random directions. Kale could discern four separate readings, each varying in size and stature.

“Could be a glitch,” J’ko added, though he too held his weapon ready.

More dust fell from the ceiling and Kale was convinced she could hear the sound of digging behind her. “We need to move on,” she said. It would not take the Boromite’s long to re-open the tunnel entrance and trap them within. Though where they were going she had no idea. She only knew they had to keep moving.

They advanced forward, slower even than before. Shadows danced in the peripheral of Kale’s visor. Fear gripped her for a reason unknown and she felt ashamed. Algoryn do not feel fear in battle she reminded herself. The heat signals flagged up again.

“Wait,” Ghalris breathed down the interface, his voice weakening. The squad halted, Kale keeping her eyes fixed ahead.

“Status?” she asked him.

Kale would have executed Ghalris then and there for breaking fire without command, only for the gout of flame that emerged from the tunnel ahead. It engulfed Gestra, who shrieked, but Ghalris was there, mag pistol firing, drumming into the boulder that seemed to scuttle ponderously towards them.

“Aim for their mouths!” he shouted.

Kale saw it then. The heat signals were creatures, small and hunched and rocklike in appearance. There were four of them and they moved with swift purpose despite their bulky frames. Gestra was untouched, her sophisticated reflex armour protecting her from the flaming burst. The rock opened its mouth again and inside Kale could see a molten interior. Fire should have come from that gut of lava but Ghalris discharged a furious number of compacted rounds into the gaping maw. The creature shuddered and slumped to the ground and the heat signal died.

Kale immediately took action. Mimicking Ghalris, she sent rounds from her pistol into the opening gullet of another rock creature. The beast reared onto its hind legs spouting a torrent of flame. The torrent came at Kale through her visor like the waves of a grey ocean. Akin to Gestra, her armour absorbed the inferno, energy shield sizzling, and she burst through unscathed, her shots firing down the monsters throat. It too shuddered wildly and keeled over, dying in a rising cloud of dust. The other two creatures were felled by J’ko and Ghalris, who stepped over one of the dead frames and kicked it.

“What are they? Boromite?” Kale had fought the worker gangs before but never had she encountered creatures that breathed fire.

“Boromite pets,” Ghalris answered. “They use them to melt rock particularly hard to shift. Nasty buggers, especially in groups. They’re usually herded by a Boromite soldier though. These one’s must have broken free.”

Kale went to where J’ko was standing, thirty paces down the tunnel. He stood over the body of a fallen Boromite. Through the grey tint of her visor Kale could see the rock flesh was singed and bitten. The herder had been killed by his herd, and Kale harboured no sympathy. In the dead rock brutes had was clutched a glowing apparatus. Kale reached out for it.

It appeared to be some form of tech, Boromite in origin. It was square in shape, clumsy in design and heavy. The single screen at its centre whirred and blipped, foreign symbols flickering at sporadic intervals. Kale tried to decipher the wavering digits but her interface found no match in its vast databank. “What is it, Leader?” J’ko asked.

Ghalris responded. “It’s a map,” he said, reaching over to press a button on the devices flank, which locked the screen onto one sequence of symbols.

Kale was sceptical. “How do you know? There are only numbers and lines.”

“That’s how the Boromite’s read maps. The numbers down are the tunnels they have excavated, the series of digit beside them are the co-ordinates to the entrances and these blocks that flash green are where they camp. They have multiple settings, dependant on which sector they are in, making it easier for gangs mining to find one another. It’s made so their enemies can’t track them.” He sounded pleased with himself. “Quite clever really.”

Kale pulled the device away. “You know how to read this?”

“And who showed you?” J’ko asked. Like the rest of the squad, J’ko held a distain towards their newest member and his know-all attitude, even in moments like these where Ghalris’s knowledge proved surprisingly useful.

Ghalris shrugged, holding his severed arm. “Back on Uuvan in my village a Boromite gang was hired to blow through core rock to reach the minerals beneath. The Boromites were quiet, but liked to show us things, especially things to do with digging and blowing things up.” He kicked the dead lavamite again. “Showed us how to deal with them too.”

Kale had to admire her newest squad member, despite his supercilious demeanour. “Can you read it then?”

“Then read it,” Kale barked, throwing the device at him, “and get us out of here.”

Ghalris made what she could only imagine was a discontented groan. He struggled using only one arm, but after clicking a few buttons, seemed to manage it. Dust clouds cascaded from the ceiling again. A rumble sounded behind Kale. She turned to look back down the tunnel and saw glimmering through the suit of her visor the faint glow of daylight.

“Move,” she called, lifted her weapon and charging back to her squad. “They’re coming. Move out.”

“Do it running then,” the veteran squad member said, “unless you want to see if they’ll help you.”

They ran down the tunnel blind, taking the left route where a junction appeared. Kale had no idea why she led them that way only that they needed to move and move fast. Ghalris was behind her, shouting.

“We’ve gone the wrong way! This leads deeper into the mountain.”

“Then find another way,” she shouted back.”

They ran for a good five hundred yards, dust flailing in a cloud behind them. Through the visor Kale could hear her squad panting with fatigue and knew they could not maintain this pace much longer. They couldn’t hide, for these were the Boromite tunnels and the brutes would know every nook and corner.

They branched right. Through the pounding in her visor Kale could hear the distinct yet unmistakable flurry of gunfire coming from beyond. Were the Boromites closing the gap already?

“Right,” Ghalris shouted again, taking them down a steep decline. Kale skidded and dust clouded her vision. J’ko overtook her, his armour clanking on the earth. Kale got up and pounded on, her armour heavier with every furious step. Ghalris hailed them through the interface.

“What are you talking about Ghalris?”

But they couldn’t wait, because the ground beneath their feet gave way and squad Kale plummeted down into the dark.

View Profile | View all posts by RichC
The Antares Initiative: Initial Photos are in!
Upcoming Events: “A ‘Cam’ Bridge Too Far” returns!