Prince Batu Delhren was infected by the Shamasai Dust, an ancient, virulent bionanospore that overcame all his shard interface implants (those given to all leaders of the Vardos Delhren). In a subsequent attack, his damaged shard implants were corrupted still further by the algorithms of a warlike drone species, so he exists in a rather precarious equilibrium with the Shamasai Shard.
The Shamasai Shard can be rather aggressive, even using Batu’s own body mass as energy to fuel its needs. As a result, the House Delhren assigned Batu a bodyguard-cum-protector, Decurion Baray Tsulmar, who has orders to both protect Batu and to kill him if his uncontrollable personal shard turns out to be a threat to the Freeborn house.
In the previous episodes of Plaguespore, Batu and Baray were sent to investigate a strange and dangerous nanophage plague on the planet Tanchen. They have little information and must do what they can for the success of a shipping contract rides on them being to sort out the problem.

The Song of the Telidh emerged from the gate and the chaotic jumble of light and colour resolved into the pin-pricked blackness of system space. Immediately, the ship’s gravitic annihilation drive ramped up to accelerate it to full, system-side velocity. Batu, Baray and Ensign Elnar pored over the holodisplays within the sensors suite.

Batu pushed back from his console. ‘I see nothing,’ he said. ‘Other than an emergency band warning, that is.’

‘It’s an Allships Transmission,’ said Baray. ‘Automatic, set to repeat.’ Like Batu she pushed herself away from the display and looked at Elnar. ‘There’s nothing on the military bands, either.’

Ensign Elnar switched to a bridge broadcast. ‘Captain, sensors drawing a blank other than an automated AST.’

The voice of the Tanchen Chief Colonist came over the ship’s tannoy – if the in-depth sound produced by myriads of nanospore vibrating in sequence could ever be compared with a primitive tannoy announcement. ‘Allships warning for Tanchen from Tanchen Chief Colonist Farbour: keep away. Tanchen II is a nanosphere plague planet. Details available from orbital Emergency Stasis Station 4. I repeat. Tanchen II is a nanosphere plague planet: keep away.” 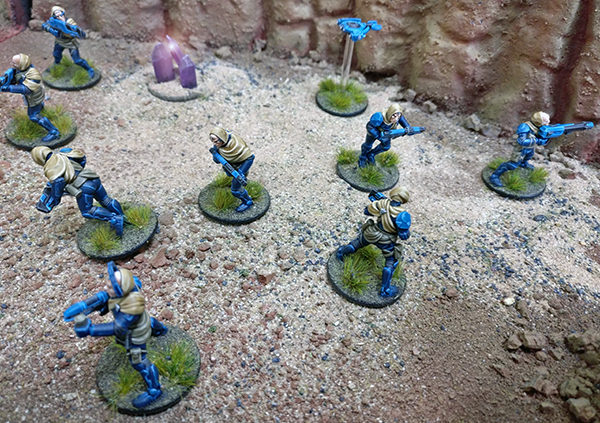 Batu scratched his neck. “Put them up on my auxiliary console, please. I want to take a look. Ship: can you give me access to compositional analysis routines.”

The melodious voice of the Song of the Telidh responded almost immediately. “Certainly, Prince Batu. I have given additional request access to your auxiliary console. Feel free to use your shard interface.”

“Batu, you are being peevish,” interrupted MyShard. “It will be faster if I have direct access.”

Batu gave another of his exaggerated sighs. “Very well.”

An image built in the holodisplay before Batu: a dust-devil, growing to a twisting shape resembling a tornado funnel in miniature. It was moving erratically across the surface of the desert, consuming whatever living thing it came across. Defensive munitions were fired: scrambler and nanophage packages, none of which held up the twister for long. The display zoomed out to show more of the mini-tornadoes weaving across the almost barren plain and a focus became apparent: like the spokes of a wheel the paths were converging on the main colony buildings. A transmat crumpled as a self-destruct was triggered, then a last shuttle took off and headed for orbit. The image changed to show details of the swirling twister, its composition: mostly sand and dust.

“Does that bring anything to mind?” asked Baray.

“I agree. It’s like the dust cloud on Shamasai,” murmured Batu. “Except here the twisters are made of much coarser granules than the Shamasai particulates.”

“I mean, look at their routes,” said Baray. She called up a topographical display and plotted each twister’s path across the plain. “Some of the twisters are against the wind.” She highlighted several of the converging routes. “It’s a planned attack from multiple points of origin rather than an opportunistic attack starting from a random impact.”

“There’s a lot of clutter in the system, but no: there’s no way to escape those converging paths except by getting off the planet. The impact points were planned.” She called up a topographic display. “Look. Each of the landings was out of site of any central surveillance.”

“So something doesn’t want the colonists there.”

“Except that doesn’t look like any nanospore I know.” Batu waved at the display in front of him. Whilst there was little detail, what could be seen confirmed the initial analysis: coarse-grained dust intermixed with microscopic particles of grainy sand. “It’s too big.”

“Too big. I love your technical knowledge.” Baray tried to call up further data but the display would not respond. “Hmm. No detailed analysis.”

“The locals fled when it took out their drones and outbuildings.”

Elnar gasped. “And took casualties.” Batu and Baray turned. The Ensign looked sick and had a frozen recording before her. “I-I’ve just received a colony status. Almost everyone is in stasis in the ESS.” She swallowed. “Th-They lost a couple of researchers from an outlying building before they panicked.”

“What did it do to them?” asked Baray. She tried to zoom in to the recording, but it was too grainy, revealing nothing but red-brown flecks of sand and dust. 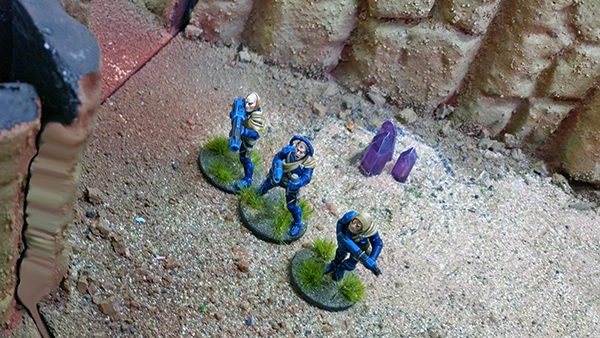 “It di-dissolved them,” said Elnar. She closed her eyes and took a deep breath. “One of the twisters enveloped the building, tore it apart and stripped the occupants’ skin, from the outside in…” She gulped. “It flayed them. I’m sorry. I’m trying not to be sick.” Baray put a steadying hand on her shoulder.

They waited for Elnar to compose herself. “Sounds like combat nanophages, to me,” whispered Baray.

“Pretty violent ones,” replied Batu, quietly. “But nothing like Shamasai. And this focuses on any biological matter and destroys it.”

“Thank you, Decurion,” said Batu. “Ensign Elnar, the Shamasai bionanospore destroyed non-living matter and infected or invaded nanospore-tainted life. But only if it could gain easy foothold into the body, preferably through an injury site.”

“Hence the Ghar having less problems with it than us. They have no nanosphere.” Baray sat back. “The Shamasai spore had a much more nuanced approach.”

Elnar turned to face the pair. The tightness of her jaw betrayed her anger. “You two seem to be saying this is just a weapon, an unconstrained destructive force.”

Batu gave a quick smile of encouragement. “Or a co-operative swarmlife the size of sand grains.”

Baray ignored him.  “It’s this that bothers me,” she said. She pulled up one of the earliest transmissions, that from a GP drone sent to investigate. “The initial scan showed high levels of pure silicon—“

“Thank you,” said Baray. “Silicon isn’t just part of the Isorian construct, but is sometimes used in primitive electronics. If you think of that and the low-grade comms chatter…” She trailed off, suggestively.

“It’s more likely to be artificial.” Elnar, whirled back to her sensor station, wiped away the image and pulled up a new set of holocontrols.

Batu rolled his eyes at Baray. “You mean we’ve confirmed what the colonists have just warned us about. Great.”

He received a scowl in response. “Confirmation always helps, boss.” Baray leant over Ensign Elnar. “Can you pull any more data from the ESS?”

“Well, it looks as if we’ll have to wait until we wake them up.” 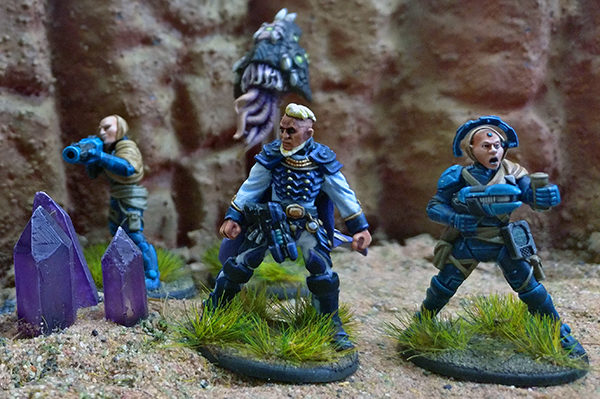 MyShard waited until Batu was alone in his his stateroom, perhaps the best the trader had to offer but it was still little more than a large cabin. “Batu. You may want to hear this.”

“MyShard, we’ve got a boring twenty hours until we arrive in the inner system.” Batu kicked off his boots, dropped his cloak and collapsed onto his bed. MyShard did not respond. “Okay, MyShard. I guess you’ve found something. Tell me.”

MyShard’s tone was smug. ” The SITAI interfaces were automatically woken by the comms chatter we saw.”

Batu sat up. “It reacted to a hostile? On a recording?”

“Yes. It identified it as military-grade, encrypted, co-ordination signals. It has gone into a more active, defensive mode and is harnessing your Shamasai bionanospore.”

”Harnessing? What does that mean?”

“Waking it up in preparation for attack or defence. I think you may want to eat.”

”Oh damn. Waking the Shamasai Shard – what does it think it’s doing? And eat what, MyShard?”

“Anything, but soon, as it will otherwise just use your body mass as it replicates.” MyShard chuckled as Batu swore and jumped over to the food fabricator. “Carbs would be good.” He pulled up carbohydrate heavy food – sticky, sugar- and honey-laden pastries with a sweet tea.

“Okay, tell me more,” said Batu as he wolfed down the food.

“There is little more to tell. The size of the particles is confusing. They are too big, almost an encasing silica matrix.”

“And…?” Batu spoke around a mouthful of food. “Don’t leave me hanging, MyShard.”

“And nothing. At least, nothing else your corrupt shard will tell me. The enclosing matrix may make it difficult for attacking nanospore or nanophages to react properly.”

”Perhaps, perhaps not. It could have evolved such a defence easily given contact with the IMTel nanospheres.”

“Good point.” Batu thought a moment. “We ought to let the captain know.”

“Is that sensible? You’ll also have to tell her that your bionanospore are waking up. I’m not sure she’ll like that.” Batu swore; MyShard chuckled. “You could tell Decurion Baray and have her privately warn Ensign Elnar.”

“Without disclosure.” Batu sighed. “You’re picking up some bad habits, MyShard. Go on, then, tell her. And warn me of anything else my damned personal shard does or discovers.” 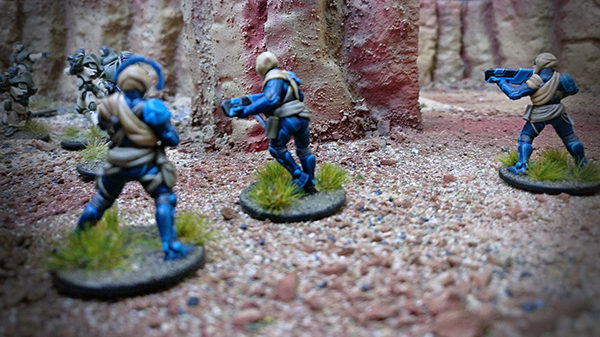 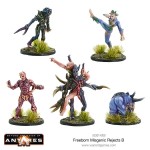 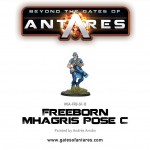 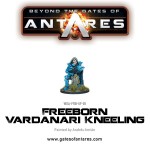 View Profile | View all posts by Aaron Trueman
History: French Markings
What is next for Antares?