Adam Murton takes us through the weapons of the Freeborn in this two-part article – from the viewpoint of an unscrupulous, Freeborn arms trader!

Ralea strode nonchalantly down the few steps into the exhibition area. As she walked she weighed up the three figures in front of her. The markets of Beredi Orbital Station were famous throughout this region of the Determinate and once again they had summoned a diverse range of customers. She made a personal judgement based on their looks and bearing – well, that plus the profiling and background information fed to her data implant by the sales AI. Her experience and the monitoring helped ensure she and House Cadix could make the most profit.

The implant whispered a summary in Ralea’s ear as she greeted the trio with a smile and open arms.

“Greetings and welcome. I am Ralea Teggori of Vardos Cadix, the number one choice for weapons and military equipment in this sector. Please allow me to show you our top sellers.” She led the group to the first of the display areas. “Our number one style is this mag-gun.” Here she held one aloft. “High power magnetic rails launch spikes and flechettes at high velocity and excellent penetration.”

One of the customers, a tall renegade Algoryn, glared at her, clearly feeling patronized. She ignored him, instead directing her attention to a stooped figure in an environmental suit: Supreme Chief Alooma. Alooma was one of the Glootkin, a panhuman morph from the desert world of Gloot. “These mag guns are exceedingly reliable,” she said. “All our mag weapons are designed to keep working whatever the environment, whatever the temperature. And they are dust resilient and easily cleaned.

“It’s not just the mag gun.” She moved on, picked up a smaller weapon that fit easily into her hand. “Mag weapons are also available in a range of different versions, starting with the mag-pistol. With its closer range, it is ideal as a back-up weapon and we routinely give them to support weapon crews. The Algoryn, of course, give them to commanders – which I think demonstrates the weapons reliability and usefulness in the field really quite well.” She ignored the look of contempt given her by the Algoryn.

“Obviously we have the standard mag-gun here. Where a higher rate of fire is required we can provide the mag-repeater. It has a lower range and each round is less penetrative but it has a substantially increased rate of fire.”

If you want both rate of fire and penetration can I recommend the mag light support or MLS,” she said, tapping one on the barrel as they passed. “These have three times the rate of fire and each round has twice the penetrative power of the mag gun.” Judging the mood of the trio, she quickly moved on to the longer-barreled weapons, low to the ground. She halted. “We also have limited numbers of these – mag-cannons and heavy mag-cannons. The ammunition from such weapons activates a powerful gravitational field capable of inflicting massive amounts of damage to vehicles and drones. One of these can make short work of even a heavily armoured skimmer caravan.” She paused, judging the response.

“If you want one of these powerful anti-armour weapons, I suggest you act now. We may not have many come the end of the week.” It was a lie, of course: she could shift as many as they wanted, but it had the desired effect: the Glootkin nodded and a low-ranking clerk stepped up to handle the details of the transaction.

But Ralea had not finished with the High Chancellor yet. “Of course as well as these direct firing magnetic rail weapons; we have weapons capable of firing over head. Can I present the Micro x-launcher, x-launcher, mag launcher rack, x-howitzer and mag-mortar?

Ralea picked up the smallest of the weapons in the cordoned-off display area. “The micro x-launcher is a hand-held weapon which can be added to infantry units to provide some useful versatility. It can either be fired directly with similar effects to a shorter range mag-gun or fired indirectly to explode with a blast effect, potentially wounding multiple members of the same unit. Our domari and the Algoryn Armoured Infantry formations use them to great effect. And, of course, it can fire one or two types of special munitions: SlingNet, which creates a localised suppressor field, and Overload, specifically for higher penetration but at the risk of causing damage to the special magazine, unfortunately – but it can be useful.” She risked a glance at the Glootkin.

She put the micro-X down and moved on. “The larger cousin of the micro-X is the X-launcher. This is a support weapon intended to be used by a crew of two or three. It has a larger blast with slightly more penetrative power than the handheld version. Whilst it’s a crewed weapon, it comes with suspensor fields making it really quite light—” she picked it up in one hand “—making it mobile enough to be fired during a very short stop.”

Ralea studied the group for a second and skipped over the vehicle-mounted alternative, the mag-launcher rack the Freeborn kept for their own command skimmers. With multiple, synchronised x-launchers it covered twice the area of a standard X-launcher, but judging by the Algoryn’s sour face, he may well have regarded it as too much of a gimmick and spoken out against it. She held back, and led the group further on to a massive X-howitzer, instead.

“For true battlefield superiority, of course, the X-howitzer is the ultimate weapon, able to fire across even the longest battlefield. It can take out whole units hitting each with twice the power of a mag gun. If you want a closer ranged, even higher-impact weapon, the mag-mortar is what you want – double the blast area. Of course, that is if you use the explosive rounds which come as standard. For the ultimate in versatility we offer a range of specialist munitions at bargain prices: Scrambler, Arc, Blur, Scoot, Net and Grip.

Alooma tilted his head and a sussurative purr indicated his pleasure. Ralea beckoned to the clerk who came over to take his order – a personal service was vital in her role. Besides, it meant she could focus on the more important work of the day. ‘This way, gentlepersons. I believe you may be more interested in these.’ She led the other two buyers towards the high-tech area of the centre.

The article continues in Weapons of the Freeborn, Part 2. 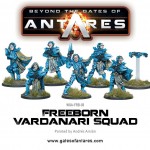 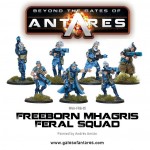