Artur returns with a short but sweet month of Antares warfare!

December in October Wargames Association was short since there were only two evenings when we could have a game in our ‘Antares corner’.

My first one was against Mark’s Ghar. Since I lost to him in our first five hundred points game, I have hoped to figure out how to tackle those adorable fluffy kittens bloodthirsty titanium-covered tanks on three legs.

I have pondered upon viable strategies, considered changing my army list, read the rules couple of times and even run some simulations that involved dice rolling, using my Desert Rats as proxies, a bit of probability calculations and causing my beloved one to see me as a mad scientist from a cheesy 60s film.

All that has led me to believe I  can actually be successful if I stick to a simple plan: concentrate fire on single unit at the time and pin them into oblivion. Rinse, repeat.

Armed with that newly-conceived belief, I sat at the gaming table next Tuesday expecting a triumphant victory. 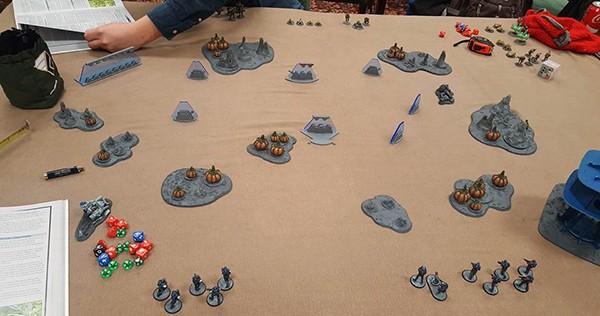 Things started to go wrong just after we rolled for the scenario, it was number four: Hold the Line. I had the initiative and chose to be the defender, bearing in mind that it would force Mark to move his suits and deny him the advantage of the Fire order while my troops continue to spray them with various deadly energies from behind the cover.

I just failed to notice that the attacking force in this particular scenario is allowed a preparatory bombardment. Needless to say the majority of my units on the table went down and the crucial Micromites have been almost wiped out by the worst possible die roll result.

From now on it was a war of attrition, which inevitably went in favour of the Ghar. Work gang with mass compactors did not achieve much without bonuses from Micromites and the well aimed gouger gun shot downed the support weapon team. Getting the distort die did not help and the second mag light hit the ground as well. 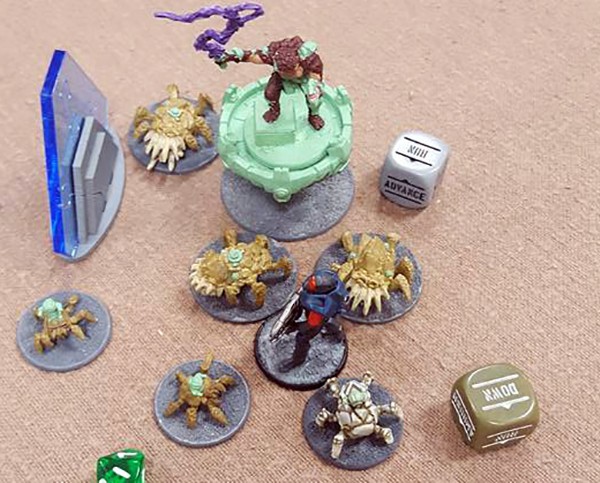 It became obvious that I ran out of units that could do anything to stop the attackers and indeed I soon lost when the battle suits and tectorists secured two of the three objectives thus winning the game for Mark.

My another game this month was against Brett’s C3. This time we rolled Reinforce the Position, a rather straightforward scenario.

I don’t know what happened but suddenly dice loved me (much to Brett’s annoyance). My units were not only able to hit but also kill opponents. Morale checks were being passed against the odds and suddenly my mag light support teams managed to do the unthinkable: they actually SUPPORTED their comrades. Shocking, I know. 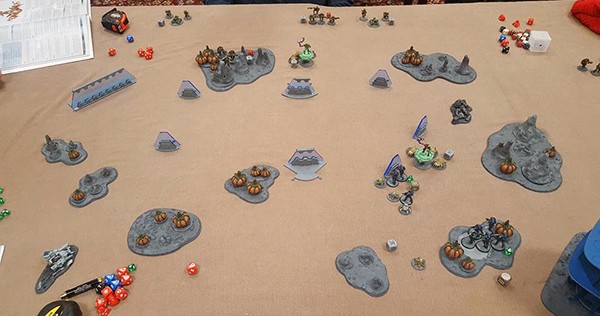 I got my Lavamites into close combat and they turned out to be as fearsome as the hype pictured them to be. Pro tip: if you want your assault-oriented troops to hack, slash or chomp through the enemy faster, try targetting units that are Down. Being able to shoot first (as any self-respecting space scoundrel knows) is a huge advantage.

However the MVP title goes undoubtedly to the mass compactor work gang, namely to its leader (or should I say foreman?) Not only did they destroy a strike squad they also survived long continuous fire and held their position fiercely. They got almost wiped out in the process except for the aforementioned leader who was passing one morale test after another with a typical Boromite chutzpah.

I have to admit, I did not have high hopes before this game but my army performed beyond all expectations! I am surely more aware now what to expect from my army. 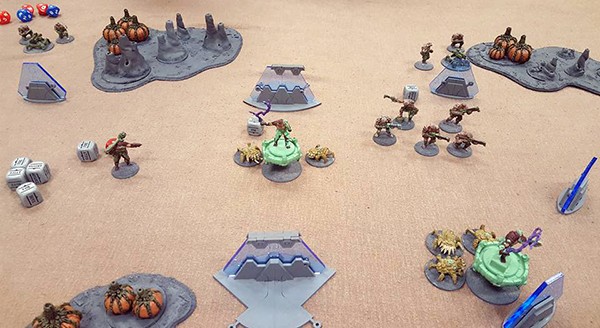 During the holiday season I caught up on my painting a bit and worked on the further backstory of my Boromite guild. I hope to present it all in the next article together with the incoming 250 point upgrade to my forces. Until then, I have two goals for January/February: defeat the Ghar and survive the C3’s unavoidable revenge! 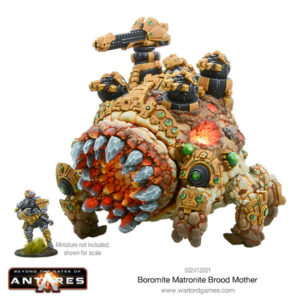 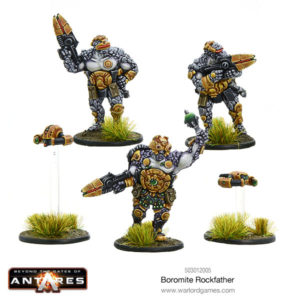 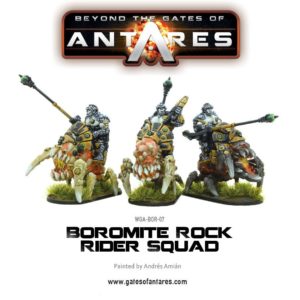 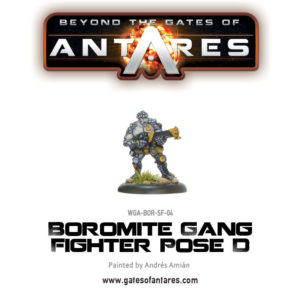 Prepare a Strike on Kar’a Nine today to get started!