Reactions in Beyond the Gates of Antares

By Rick Priestley and Tim Bancroft

(This replaces an earlier article written to support the Alpha version of the playtest rules).

This is one of a number of articles explaining some interesting aspects of the rules for Beyond the Gates of Antares and how they have been developed from the original Bolt Action rules. This article looks at the dynamic order system, or Reactions, a way a unit can dynamically interrupt or make an action in response to an opposing unit’s action. 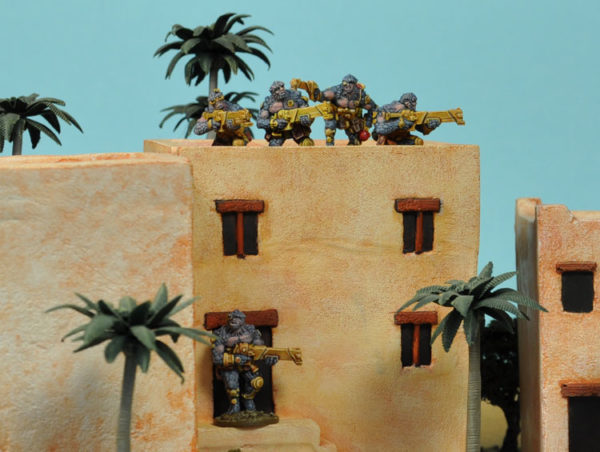 The Order system used in Beyond the Gates of Antares is a development of that used for Bolt Action: each unit has a dice in the dice bag and the players pull one dice at a time to determine which side gets to take an action. The chief difference between the two is that the new game uses D10s for most resolution purposes rather than D6s or 2D6. This allows for a greater band of stats and modifiers, which is necessary to accommodate the different capabilities, size, robustness, and strength of the combatants.

So, with Order dice, the system is basically the same as Bolt Action, except that you roll a single D10 against the unit’s Command stat in order to act, the Command stat being used for giving orders. The orders themselves follow the same format as in Bold Action, except for ‘Ambush’ which works somewhat differently – and which we explain below!

The Ambush order uses a Reaction system, a single mechanic to manage all reactions to an opponent’s action. This allows for different types of reaction, makes room for us to add more reactions should we wish to do so and also permits us to incorporate specific reactions into scenarios if that should prove useful. This makes reactions a very flexible and useful feature of the game.

Well, units can only attempt a Reaction if they either have no Order dice (i.e. if they have yet to receive an Order that turn) or if they have an Ambush order dice. The Ambush order acts as a kind of marker that the unit is alert and ready to react. Units that make successful reactions are allocated an Order dice corresponding to whatever they do (usually Fire or Run).

Units can attempt reactions in the following circumstance.

Stand and Shoot. A unit that has been successfully assaulted by an enemy can react by shooting as the enemy approach. If successful, this gives the unit a Fire order and enables it to try and shoot down the approaching enemy before they can bring their known weapons to bear.

Go Down! A unit that is targeted by enemy shooting can react by going down. This is the only reaction that doesn’t need a Reaction test – a unit that Goes Down does so automatically and a Down order is placed next to the unit. There is an important difference between down units in Bolt Action and Antares. In Antares, units with a Down order can’t automatically place the dice back in the dice bag at the end of the turn. Instead, they have to pass a Recover test based on its Command to do so. This makes it risky to Go Down as there’s a good chance you’ll stay down! On the plus side though, down units are much harder to hit in Antares than in Bolt Action – so it’s a trade off between mobility and safety.

Ambush. The Ambush reaction is also a little different to the general run of Reactions because it is a previously assigned order that can be changed to another. A unit is assigned an Ambush order, as normal, when its dice comes out of the bag. The dice is placed beside the unit with ‘Ambush’ showing. Until the Ambush is triggered, the unit can make any of the above Reactions as if it did not have an order dice except that it automatically passes the Reaction test – it has effectively already made and passed an Order test.

What is even more useful is that a unit on Ambush can spring it on an enemy unit who moves within its field of fire using either a Run or Advance order. What happens is that the Ambusher interrupts the enemy units move anywhere along that move and immediately gets to shoot. The unit is given a Fire order (the dice is turned to ‘Fire’), does not have to make a Reaction test, and can shoot as normal. Once it has finished, its target continues its move.

Another useful aspect of Ambush orders is they can be retained from turn to turn. This means that if a unit did not spring its Ambush in turn 1, it can retain the order dice (on Ambush) and perhaps spring it on an enemy unit moving at the start of turn 2.