Algoryn, Beyond the Gates of Antares, Painting & Modelling, Showcase

Beyond the Gates of Antares: Matt Houghton’s Algoryn

Week-by-week we’re seeing more and more Beyond the Gates of Antares projects from around the community – over on the Facebook Group there are some fantastic painted models, conversions, and backstories being concocted…

This week, we were particularly taken by the Algoryn paint scheme from Matt Houghton of Evil Bear Wargames – we got in touch with Matt, and asked him for a few words about the project…

Beyond the Gates of Antares had been on my radar for a while – Warlord’s Algoryn minis hit me as a nice alternative power armoured race – and the lizard like heads was a bonus, I could imagine these guys going around very warlike yet tactical, kind of like Klingons with brains! 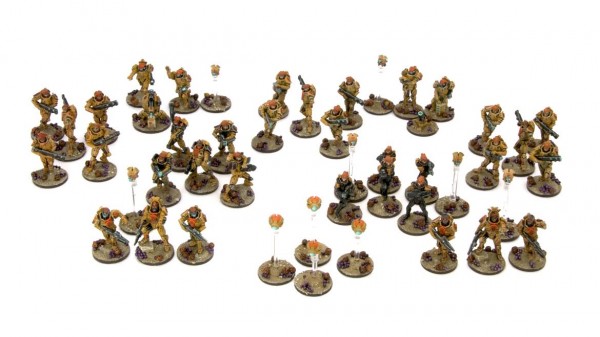 I was impressed with the miniatures – they were chunky – my eyes are old and my hands are like clubs, so they made a really nice change from the intricate skinny modern stuff I normally have the pleasure of working with.

Building them, I mounted the models on 25mm laser cut wood bases – including the drone, to keep things uniform. 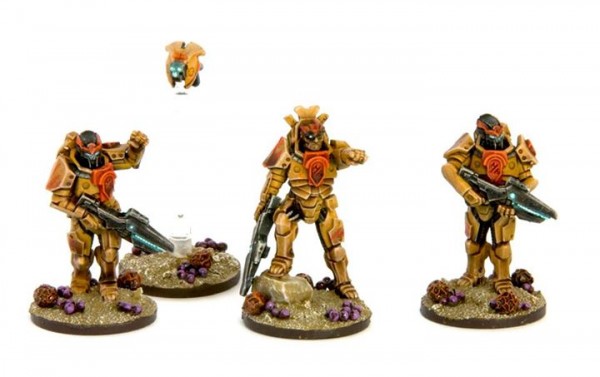 After asking a few questions on the Gates of Antares facebook page, I decided to go for a high tech paint scheme – but trying keeping it slightly tribal feel. After undercoating them (I tried black and white undercoats, but it made little difference on the final outcome) I then sprayed the main colour yellow – well it’s not really yellow – it’s actually Filler primer! It’s like an undercoat that’s a dull yellow!

I painted the heads separately – they were undercoated and sprayed Army painter red. I then picked out some areas in black – then the entire model was dry-brushed with an off-white colour, and the red areas were then lightly brushed over with an orange.

The entire model then got a wash of earth shade mixed with a medium, and the skin received my standard treatment – but I used a camo shade of green ink to wash the face and give it a slightly different alien tint. 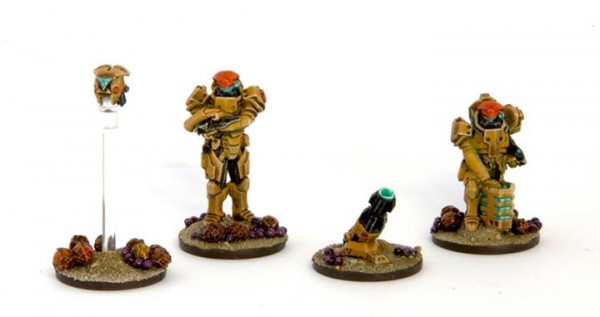 Plants on the bases were herbs from my good lady’s herb selection, I often look at these thinking how to use them when I’m meant to be helping in the kitchen, and finally all that help paid off!

Once the minis where sprayed with matt varnish I went over glowing areas and the plants with a brush of gloss varnish. 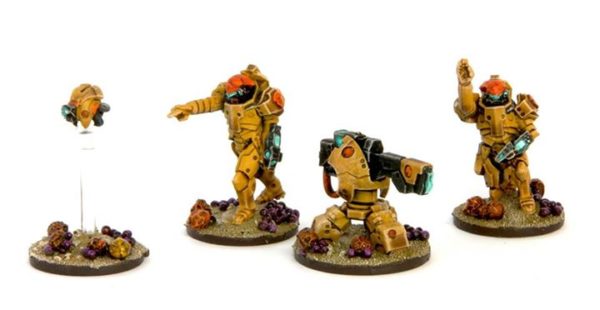 The infiltrators are mostly black; I wanted to go for the look of the alien raiders from Britain’s toys that I collected as a small child in the early 1980s.

The assault guys I wanted to look like bruisers so added black in places that I wanted to emphasize their bulk and brutality.

Overall, the paint scheme was very quick and simple to do – and I’m very happy with the results. It was the best part of a week’s work in between jobs!

My future plans for the force are to paint 2 more support weapons so that I have the suggested playtest force from the Beta rules, and get the 2 Mercenaries painted. I also have some vehicle conversions on the back-burner for my tribe, Oh – and maybe some Concord when they are released…

We’ll be regularly dipping into the Facebook page to showcase some of our favourite painted models, battle reports, conversions, background, and whatever else we might find – so be sure to join the Facebook group and let us know about your ventures into the Antarean universe!