Kicking off our 12 Days of Christmas, here’s your first tasty present: a work-in-progress shot of the Sd.Kfz.135 Marder I. 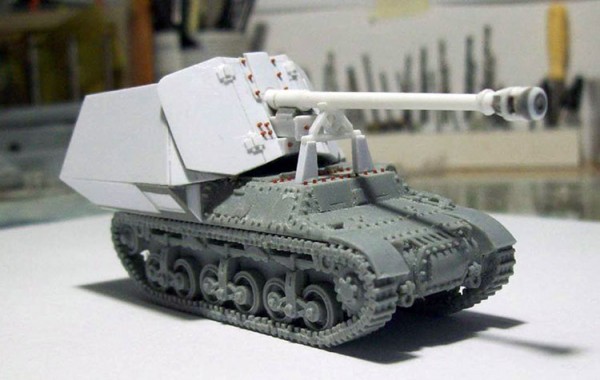 With the fall of France in 1940 the German victors found themselves with many thousands of vehicles. Some were pressed into service by their new owners whilst others were converted into new types of vehicles. The hundreds of Lorraine tractors and personnel carriers were quickly converted into self-propelled guns and tank destroyers.

As you can see from the photos here the basic hull of the Lorraine now houses a tall fighting compartment with a potent 75mm PaK 40 anti-tank gun. Renamed by the Germans with the catchy title of 7.5 cm Pak 40/1 auf Geschützwagen Lorraine Schlepper (f) /SdKfz 135, it is better known by the nickname Marder I.

Fighting predominantly on the Eastern Front, the remaining Marder Is would form part of the defence of Normandy in 1944 within Field Marshal Erwin Rommel’s 21st Panzer Division.