Want to play the coolest gunfighters in the galaxy in the Strontium Dog Miniatures Game? Then you’ve come to the right place! Nothing fazes the Stix Brothers, and there’s enough of them to fill out your whole team if you wish. But who are the mysterious Stix Brothers and what’s their story?

The first Stix Brother appears in The Schicklgruber Grab, vying with Johnny and Wulf to bring in Adolf Hitler for a cool million credits. He fails, and loses his life in the process, but shows us the flexible morality of the Stix; essentially, they don’t have any. Despite being Search/Destroy agents, they’re more than happy to take whatever job is offered and kill whoever their employers feel needs to die – or whoever gets between them and their credits.

The next appearance of two Stix Brothers in Outlaw reveals there are an unknown number of Stixes and they all seem identical. These two Stix commit mass murder just so they can blame Wulf and Johnny; they too meet a sticky end.

Not all Stix Brothers play the bad guys though. Pikey and Bovus Stix work alongside Johnny Alpha without letting their natures get the better of them. However, Johnny has killed enough Stix to make it personal with the family as a whole; the Stix Brothers’ father, Silas, takes out a hit on the Strontium dog that has killed several of his sons. While he is unsuccessful, he at least hires outside help rather than putting more of his kin in harm’s way.

While they don’t appear to be your typical mutants, the Stix are certainly not normal humans either. They all share some distinctive mutant powers – indeed, it seems that all the Stix being identical is part of their mutation. Firstly, they are exceptionally strong and have durable skin; one climbs the outside of a building by pushing his hands into the concrete wall to create hand-holds. They are unusually resistant to being shot, but are certainly not invulnerable, as Johnny Alpha proves on more than one occasion. The flip-side of their strength and resilience is that they are relatively slow-moving.

The Stix also exhibit extremely effective intimidation which may be a mind-control power. It is possible their steely-eyed stare is responsible, but their intimidation is on a par with Johnny’s Alpha Command. It is therefore more likely to be a mutant power they all possess.

So now that you know a bit about the background of the Stix Brothers, how do they play in the Strontium Dog game?

The Stix are primarily gunmen – their custom blasters are powerful and accurate at range. They also have the Gunfighter skill, so if you’re going to shoot at them you’d better make a dent or they’ll be shooting back. They’re not bad at close combat either, given their impressive strength.

The brothers epitomise the slow, deliberate and unflappable western gunfighter; they can neither charge nor sprint on the gaming table. This unwavering cool makes them extremely intimidating though, pinning fearful enemies to the spot with every move they make. Opposing fighters will want to stay well away from these ambling terrors – which of course suits them perfectly.

The Stix are peculiar in that their list of allies and enemies are virtually identical. They are as likely to ally with law enforcement or S/D agents as they are with outlaws, pirates and slavers! They can be found in conflict with any of the same groups – it all depends on their job. To get paid, they’ll go up against whoever they need to.

Johnny Alpha is the only individual named as an enemy – killing multiple members of the same gunslinger family will have that effect. Even so, as an S/D agent there are still Stix who will work alongside him.

The Stix Brothers come with two Armoury Cards – Frag Bomb and Gas Bomb. Both weapons are described in the Strontium Dog rulebook. Both can give the Stix (or any combatant) an explosive edge if so equipped.

The Stix Brothers box also includes the Stone Cold card; this gives an activating model three snapshot actions rather than the usual two! While not specific to the Stix Brothers, it’s certainly a very useful and appropriate card for them to have.

Overall, the super-cool Stix Brothers are an important part of Strontium Dog lore and great fun to play on the tabletop! 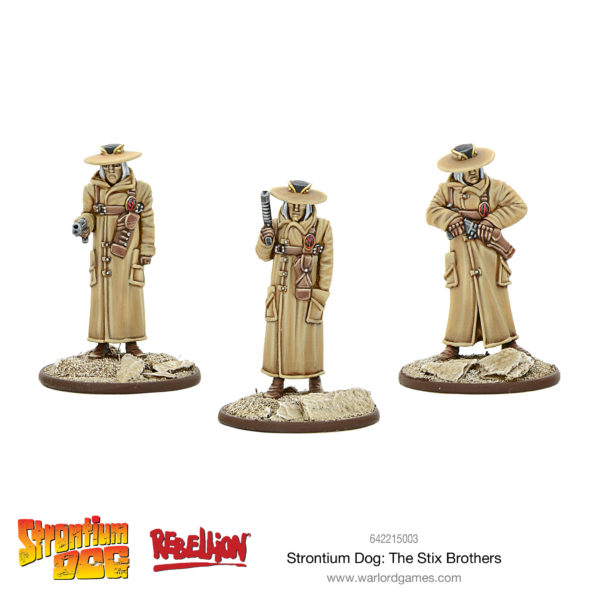