A Prelude to Campaign: Fortress Budapest

Throughout the autumn of 1944, the Axis forces in the Carpathian Basin were fighting for their very existence. The battle for Fortress Budapest was about to begin! 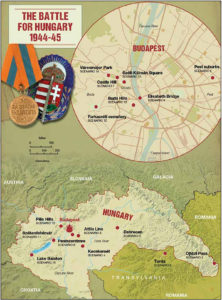 The Red Army, pushing ever westward, was nearing the peak of its strength, with close to 6.7 million soldiers

advancing on a front that ran from the Baltic Sea to the Adriatic. The Axis frontline in Romania collapsed on 23 August as the Red Army defeated the combined Romanian and German forces of Army Group South Ukraine in the Iasi-Chisinau operation.

Faced with the complete destruction of their country, these defeats prompted the Romanians to switch sides and their monarch, King Michael, to declare war on their former allies and dismiss the pro-Axis Prime Minister, Ion Antonescu.

German units in Romania suddenly found themselves in hostile territory. This, coupled with the rapid advance of the Soviet 2nd and 3rd Ukrainian Fronts, allowed the Red Army to maul the badly disorganized German units fleeing towards Hungary.

The generals of these two Soviet Fronts, Malinovsky and Tolbukhin, were reported to have annihilated 13 enemy divisions and taken 106,000 prisoners. On 12 September, Stalin promoted both men to Marshal of the Soviet Union in recognition of this victory. 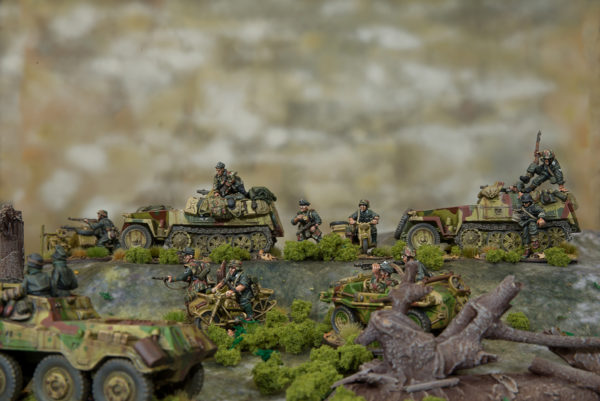 Bulgaria followed Romania and defected on 8 September, leaving the Kingdom of Hungary (alongside tiny Croatia) as the last of Germany’s European allies. She would fight to the bitter end and would pay the price accordingly.

Following the destruction of the German forces in Romania, units of the Soviet 2nd Ukrainian Front moved up from the south-east and arrived at Hungary’s southern Transylvanian border on 25 August. Despite a spirited defence by the Hungarian 1st Army fighting in Galicia, the 4th Ukrainian Front also broke through from the northeast, creating a giant pincer holding the Carpathian Mountains in its claw.

Rapidly mobilised Hungarian Border Guard battalions were joined by retreating German forces coming from Romania and both sides raced to secure the mountain passes of Transylvania.

Hungarian troops manning a German PaK40 anti-tank gun during the siege of Budapest.

Faced by an overwhelming local superiority in armour, the Axis forces were unable to hold back the Red tide with the hastily improvised forces available. Soviet armour broke through the Carpathian Mountain passes and entered the Great Hungarian Plain.

At the same time as Allied paratroopers were dropping from the skies over Holland in Operation Market Garden, German Panzer divisions in Hungary were launching Operation Debrecen, an audacious plan to cut off and destroy these spearheads of the Soviet mechanised forces at the vital city of Debrecen, resulting in one of the most desperate and swirling tank battles of the war.

Although the counterattacking panzers dealt a massive blow to the overextended Red Army on the Tisza River at Debrecen, they were again forced to fall back to what was the last ditch in Hungary, the Danube. 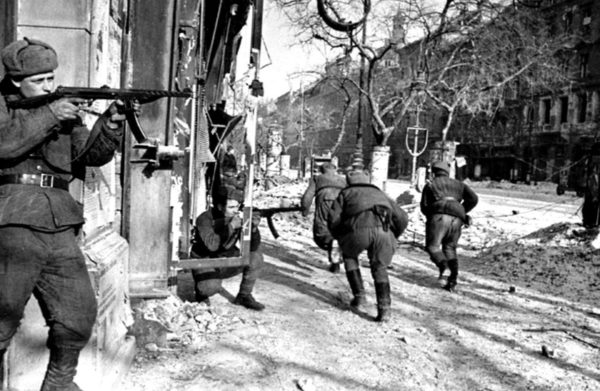 Sitting astride the Danube and blocking this traditional pathway for eastern invaders for centuries was the glittering capital city of Budapest. Soviet armoured battle groups crushed the weak forces on the city outskirts and encircled the Hungarian capital, trapping 76,000 Axis troops and 800,000 civilians within.

Whilst the Battle of the Bulge raged in Belgium, the streets of the Hungarian capital were fought over during the same bleak winter, with the siege lasting over 102 gruelling days. It was one of the longest and bloodiest city battles of the war, equalled in ferocity by only Stalingrad and Warsaw. 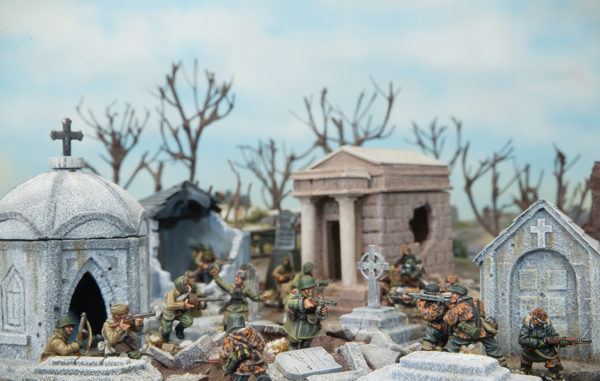 A bloody brawl erupts over the crumbling mausoleums of the Farkasreti cemetery!

The Axis defenders trapped in the city were a random yet formidable collection of units: dismounted SS cavalrymen, Panzergrenadiers of the Feldherrnhalle Divisions, Hungarian volunteer militias, and Assault Gun Batteries were faced by no less than 300,000 men of five Soviet infantry Corps and one Romanian Corps.
Holding Budapest became an obsession for the Führer.

This capital city of his only remaining, non-puppet European ally was also the gateway to Vienna and the Reich’s southern flank. If that wasn’t enough, the Germans last remaining oil fields were at Lake Balaton, only 200km southwest of the besieged city. After the failure of the German Ardennes offensive, Hitler transferred half of all remaining Panzer Divisions on the eastern front to the Hungarian theatre, even as the Red Army was on the Oder River, the virtual doorstep of Berlin. 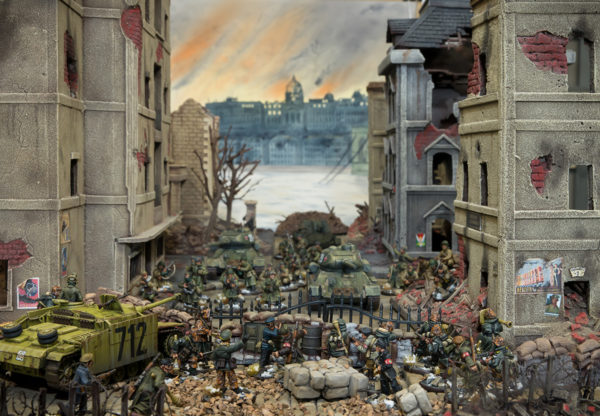 Hungarian forces dig in to resist the Soviet attack!

The vaunted veterans of the IV SS Panzer Corps launched Operations Konrad I–III attempting to break through to the beleaguered defenders. Stalin too became obsessed with taking Budapest, and quickly. He had his eyes on the post-war division of central and Eastern Europe and wanted to push the boundaries of the Red Army’s conquests ahead of the planned Yalta conference in February 1945. He ordered Marshal Malinovsky, commander-in-chief of the 2nd Ukrainian Front to crush the defenders and capture Budapest within 5 days. The Siege of Budapest would not prove the quick victory Stalin desired…

Pre-order your copy from Warlord today and get a FREE exclusive miniature!