As the king of the battlefield, artillery is a crucial component of any army. This week, we’re looking at how to add some big guns to your Afrika Korps army.

Able to lob high explosive shells over intervening terrain, howitzers are an essential part of any army. 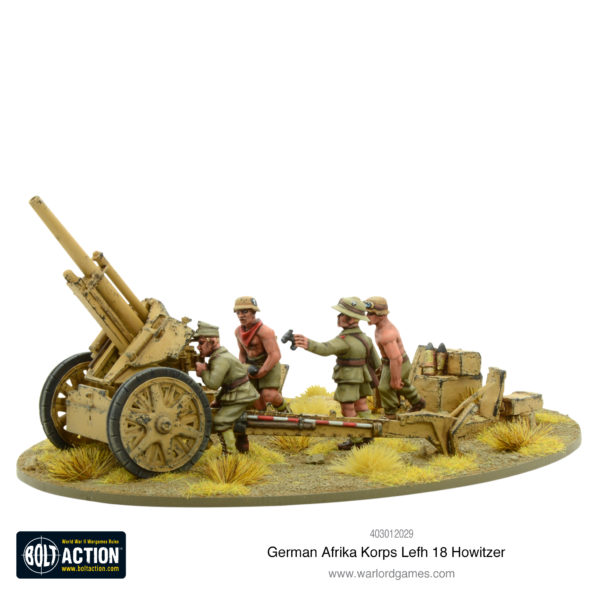 These big guns are ideal for engaging targets at distances beyond the range of your conventional small arms or tank guns. Able to lob high explosive shells over intervening terrain, howitzers are an essential part of any army.

In a pinch these weapons can be fired over open sights – with a penetration value similar to that of a light anti-tank gun. This is sufficient to threaten light tanks and personnel carriers, and a lucky shot could swing the battle in your favour.

Afrika Korps armies survive on their mobility, and an unwieldy howitzer might seem like a strange choice, but the firepower of your tanks leaves much to be desired, and the extra firepower comes in handy against enemies sheltering in buildings or entrenchments.

If you’re looking to make your Afrika Korps army look a little different, consider that they were often equipped with artillery captured during the battle of France. The orders of battle indicate that the artillery regiments may have used the Italian Modelo 100/17 howitzer, the British 25pdr and the French 1936 Schneider. These are all available in our webstore, along with a pack of German artillery crew.

With a reasonably long range and decent penetration, it’s more than a match for most light tanks and armoured vehicles. 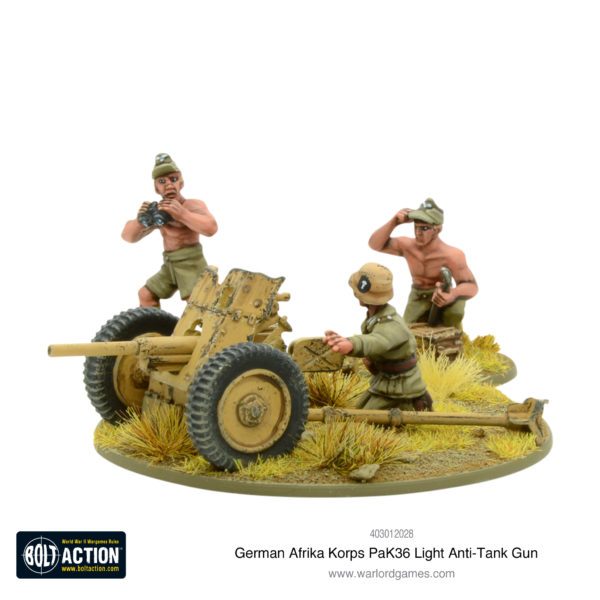 The 37mm PaK 36 is a cheap and reliable way to add some anti-tank firepower to your army. With a reasonably long range and decent penetration, it’s more than a match for most light tanks and armoured vehicles. It suffers from a lack of manoeuvrability but if well-sited (in areas with unrestricted line of sight like down roads or across the open desert), it can seriously disrupt your enemy’s battle plan.

Much like the medium howitzer, these guns are going to be much less manoeuvrable than the rest of your army. Compensate for this by giving them a tow, or using the gun and a squad of infantry to anchor an attack while the remainder of your force charges up the flank.

If you’re expecting to go up against heavier tanks like the Matilda II, consider paying the extra points for the heavier 50mm PaK 38.

Use it to cover choke points or push forward to engage armoured threats before they can break into your rear areas.

While it uses up a slot that could be occupied by a howitzer or anti-tank gun, the firepower of a light auto cannon is not to be sniffed at. 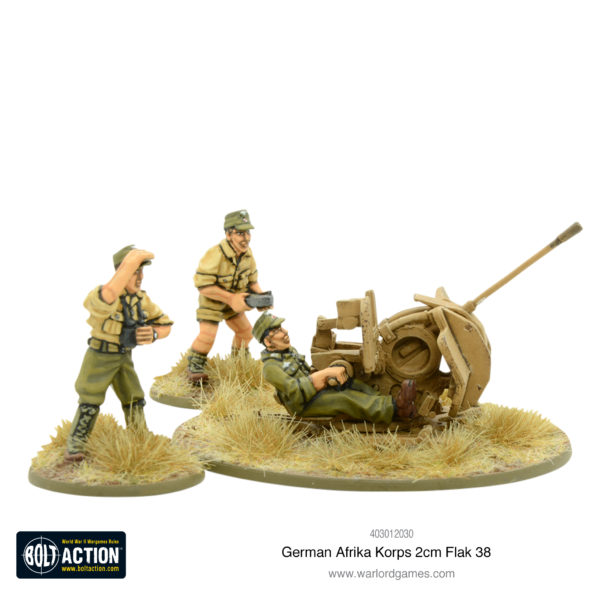 The close coordination between the Desert Air Force and the 8th Army meant that low-flying Hurricanes and Kittyhawks were a common sight over the Western Desert. As such, you might want to consider including one of these versatile artillery pieces in your Afrika Korps army.

While it uses up a slot that could be occupied by a howitzer or anti-tank gun, the firepower of a light auto cannon is not to be sniffed at. With two 1″ high explosive shots a turn, you can really rack up pins on enemy units, slowing your opponents attacks before they can disrupt your battle line.

If you’re looking to augment the firepower of dug-in infantry squads, while staving off attack by enemy aircraft, the 2cm FlaK 36 is a pretty cheap way of doing it.

Tom spends most of his time buying books and painting miniatures. He enjoys putting animals on the bases of his miniatures and half-finishing side projects. Some say that he lives in a tower on top of some windswept northern hill with his wife and cow-patterned cat, Spaghetti.
View Profile | View all posts by Tom Mecredy
Hobby Guide: Flank & Centre Companies
A Prelude to Campaign: Fortress Budapest