Alan: Carrying on from how we made the board, this article is about how I painted the Bridge. I must state at this point that I received the bridge pre built so I haven’t included any tips on how to build it. All paints used were Vallejo Model Colour unless otherwise stated.

I started off by going round the bridge making sure that there were no rough bit from where the bits were attached to the frames. The girders that were made up from several strips of MDF were then filled with green stuff to make them look like one solid piece of metal. Green stuff was also used on the road and sides of the bridge to cover any joints, please see the pictures. 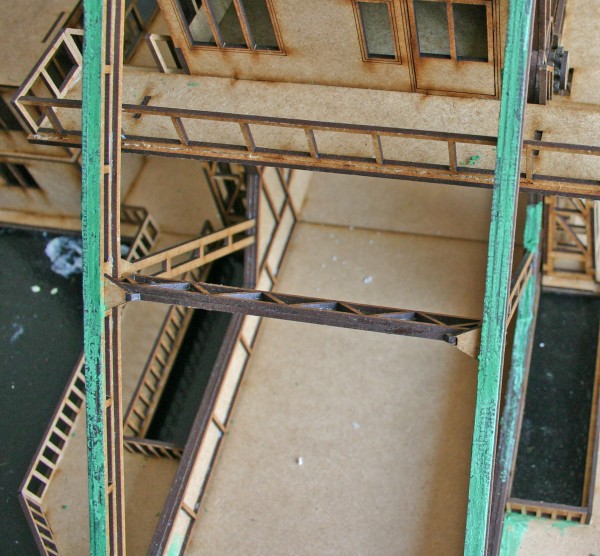 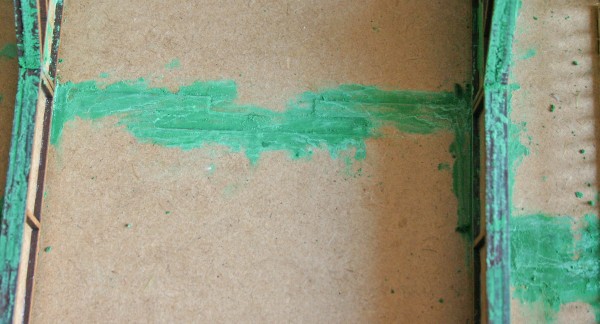 The entire bridge was then sprayed black. With the model being MDF the undercoat dried very quickly and I was able to get on with painting straight away. Looking at the bridge there are 3 main textures/colour palates you will be using: 1) The metal work of the bridge and control tower, 2) the wood work of the road and footpaths and 3) the concrete at either end were the bridge joins to the road way.

To paint the bridge I used an airbrush for the metal work and concrete areas, however, similar principles apply if you are using brushes.

All the metal areas of the bridge were base coated with Dark Grey. 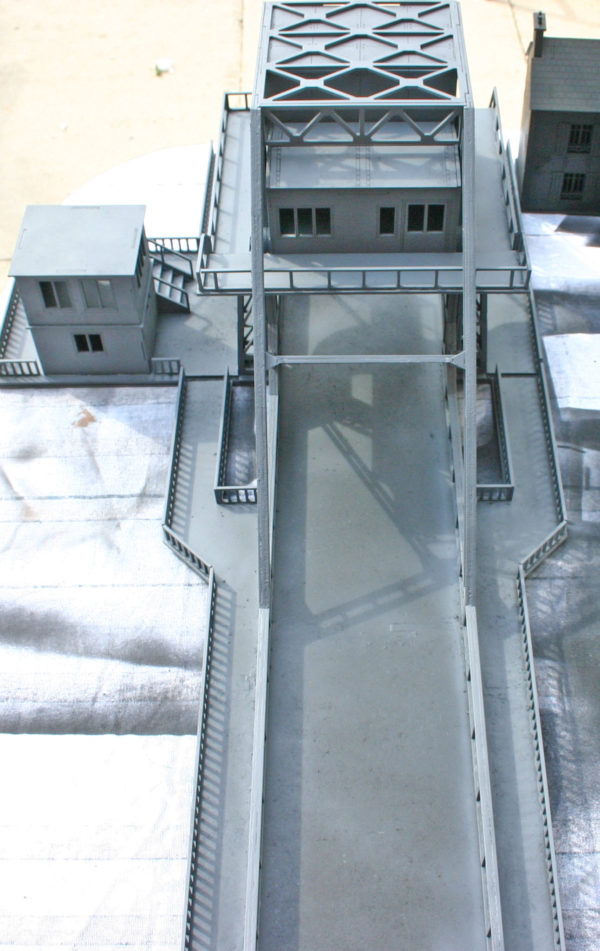 Once this was dry the first highlight was applied with Stone Grey, being careful to leave the most recessed areas (such as the joins in the panels on the counterweight) dark grey. You may need to do a couple of coats to get an even coverage as the MDF will absorb the paint. 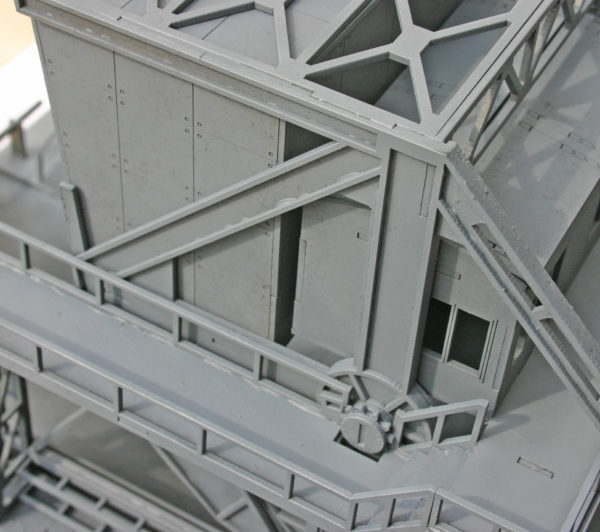 Once the Stone Grey was dry the next highlight was added. This was a 60/40 mix of Light Grey and Stone Grey. 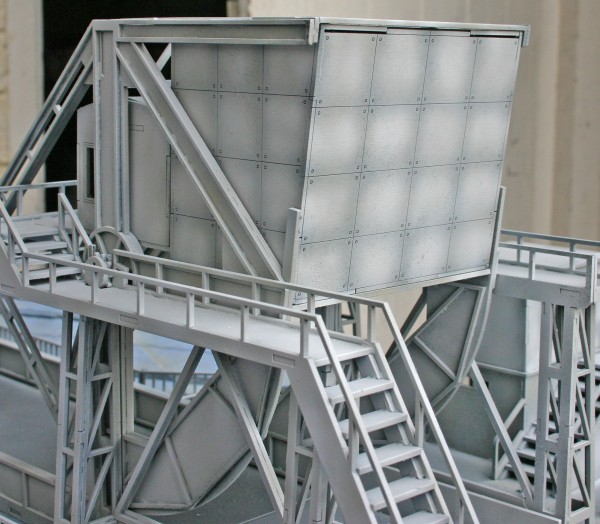 Once all the paint on the metal work was dry I masked off the areas that contacted either the concrete or wooden areas then moved onto painting the concrete areas. 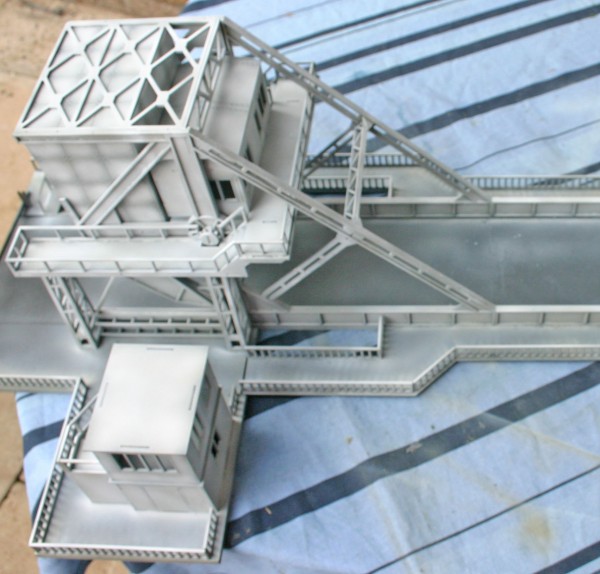 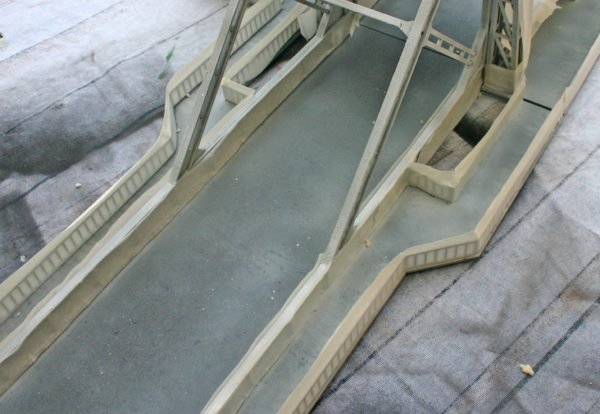 All the concrete areas were base coated with Dark Grey, the first highlight was Light Grey, followed by a 50/50 mix of Light Grey and Stone Grey.

The concrete areas were then highlighted with a 70/30 mix of Stone Grey and light grey. This highlight was not applied uniformly as we were wanting to simulate the texture of concrete on the flat MDF. White was then added to the mix for a final highlight. 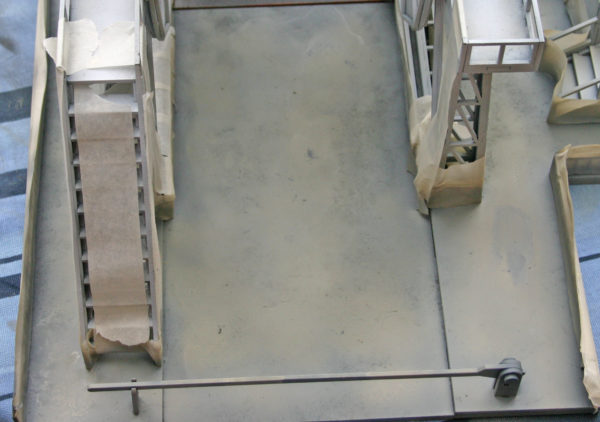 All the Wood areas of the bridge were painted with a base coat of Game Colour Charcoal Brown (German Black Brown from the model colour range would be a good alternative). Once this was dry the planks were then marked out with a fine tip black felt tip marker. The planks on the footpaths were done at 5mm apart, this ones on the bridge were drawn on at 1cm apart. We did both sides of the roadway/footpaths so that when the bridge was raised you would be able to still see the wooden planking. 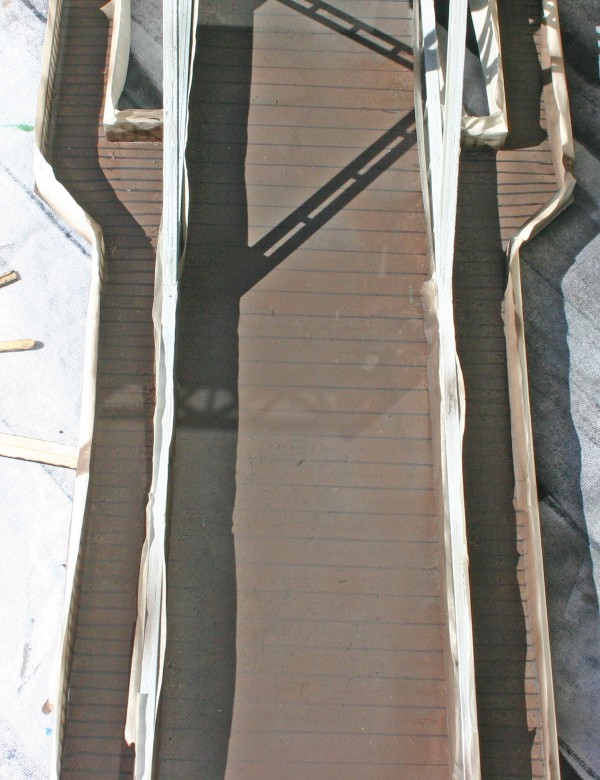 Once the black marker had dries the wood work was highlighted with Game Colour Parasite Brown. This highlight was painted on to provide a wood grain look to the planks. 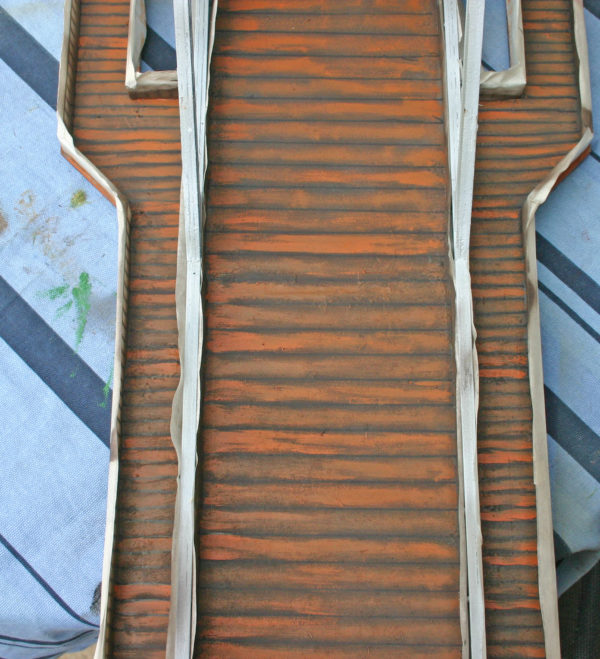 The next highlight was Buff. This was painted on again to provide a wood grain effect, extra attention was paid to make sure that this highlight edged the black marker. This provided a good contrast for the planks and made them stand out. 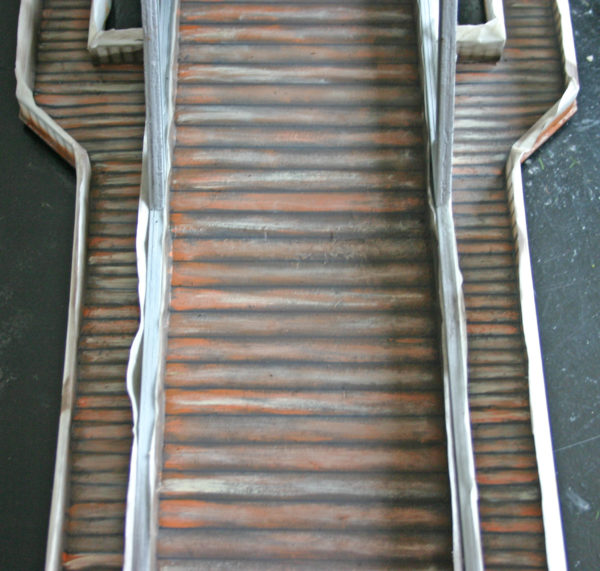 Finally all the wooden areas were given a sepia wash, this had the effect of tying the colours together and toning down the contrast between the highlights. Be careful not to put too much wash on and ensure that you apply it following were you have marked the planks, as brushing it heavily onto the wood work will wash the black marker off. 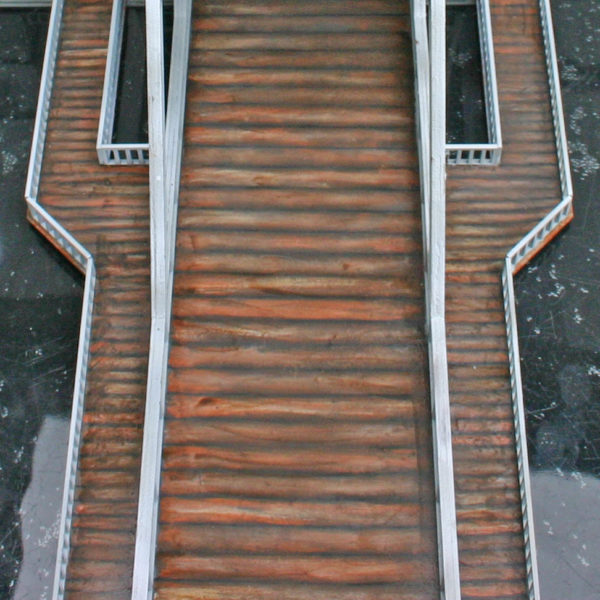 At this point the check points at either end of the bridge were also painted. First of all they were base coated with Dark Grey, this was highlighted with Light Grey and then white. Once the white had dried the chevrons were marked in place with a pencil. These were then base coated in Burnt Cadmium and highlighted with Flat Red.

Once the bridge had been painted the metal areas were given a coat of Gloss Varnish so that they could be weathered.

First of all the gears on the bridge mechanism were made to look well oiled. This was done by mixing black and brown ink (30/70 mix) and applying it to the cogs on the bridge. This was built up in layers until we were happy with the effect. 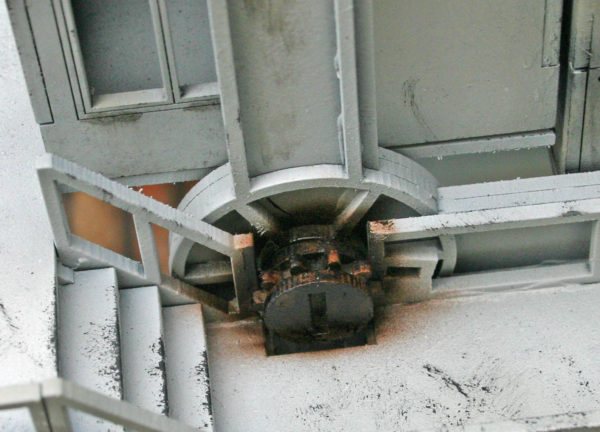 The paintwork on the bridge was then ‘chipped’. This was done by lightly sponging on German Grey onto areas that would see heavy usage (steps, handrails, etc.) 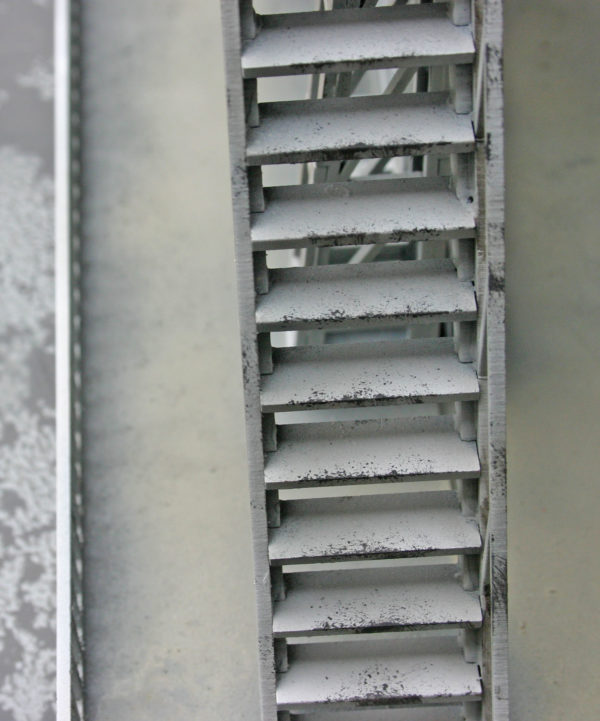 Burnt Umber oil paint was then thinned with white spirit, this was then painted on along any edges that would be exposed to the elements and left to dry for 5 minutes. Then taking a soft brush the paint was worked to provide streaks were rainwater would have run down the bridge. Be careful to make sure all the streaks follow the same direction and run in a logical way (down the bridge following gravity!) 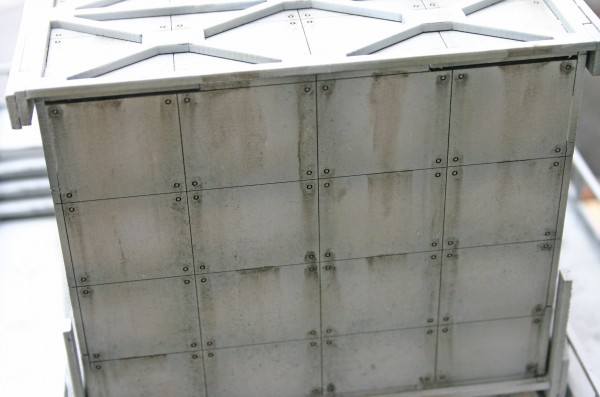 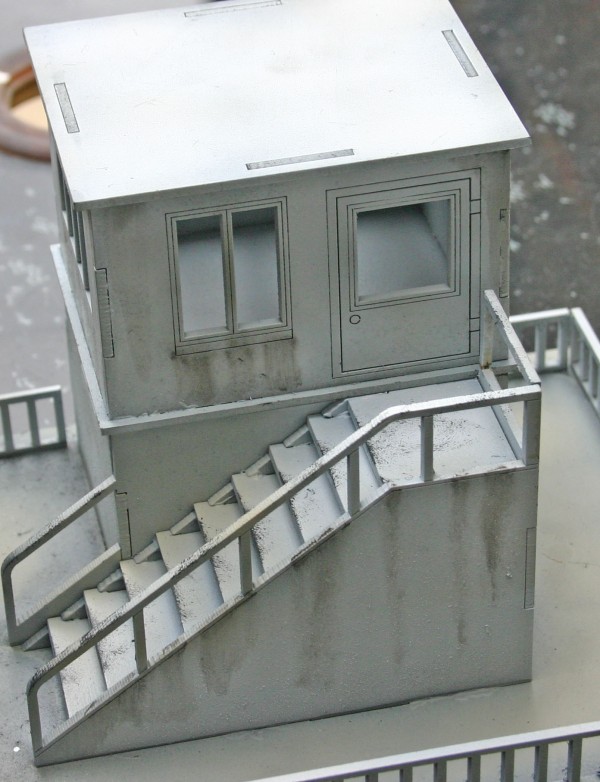 The bridge was then given a coat of Matt Varnish.

To weather the wooden roadway Dark Mud and European dust weathering powders (produced by Mig production) were mixed together and thinned with white spirit, this was then painted onto the roadway, being careful to give the effect of heavy usage by vehicles. You want to make sure that the planks are still visible along the edges of the roadway and in several other places on the bridge. Whilst this was drying small amounts of European Dust weathering powder was sprinkled onto it. Once dry a soft brush was then run over the weathered roadway. This was then given a light coat of Matt Varnish. 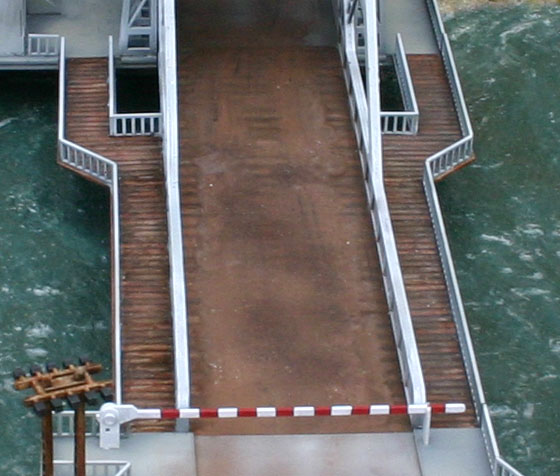 The Bridge was then complete.

Back to Part 1 – Building the Pegasus Bridge table

Now head over to have a look at Pegasus Bridge the movie and give them your support! 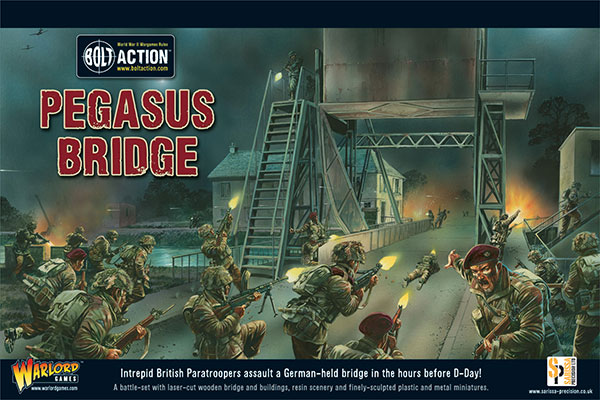 These massive sets contain everything you need to recreate the daring raid that paved the way for the Allied D-Day invasion. The Pegasus Bridge battle-set contains all the fundamental features whilst the collector’s edition, Ham & Jam! adds in loads more goodies.