PDF downloadable army lists for each faction in the Antares universe are now available… for FREE!

These FREE Antares Online Army Lists replace the lists in the Antares rulebook itself. The lists have been amended and expanded in line with the current supplement, errata and rules amendments.

Inevitably, as we expand our Antarean ranges the original army lists become out of date. As we publish more supplements, the relevant army lists entries become dispersed over a series of publications. It’s very inconvenient! By making the army lists available online we can ensure the current version is there for all to download. Did we mention they’re Free?

Another useful thing about having our lists online is that we can make any necessary corrections or amendments quite quickly. That might mean addressing a genuine mistake – though hopefully not too often. More likely it will reflect community feedback, allowing us to fine tune a rule or value, or change the expression of an entry to make things clearer.

Lastly, an online list provides more space to present the lists, which means we can add pages as needed and include more by way of explanation where it is useful to do so.

The lists are presented in the same format as the original Antares rulebook and supplements, with a few minor adjustments to aid clarity.

Some multiple entries for things like weapon teams have been compounded into a single entry with options for different weapons.

Entries that were sometimes expressed slightly differently in different lists have been revised into a standard format.

As you will see, the lists are presented in a minimal style, without the embellishment of illustration or background tinting. This is to allow the pages to be printed more conveniently. It also allows us to easily make changes and add new entries in the future.

The Antares Online Army Lists have been revised and updated throughout, and these changes supersede any previously published errata for the original lists.

Some points values have changed. In some cases we have simply corrected values that were wrong. In other cases we have changed a value in line with our experience and with community feedback from players all over the world.

A few options have changed or been added. Once again this corrects a few mistakes. More usefully it expands the available options where this is consistent with game play; for example, by adding the option for impact cloaks to Skyraiders and Skarks.

Some special unit choice restrictions have been lifted, most notably those tying the availability of transport vehicles to core troop types. It was felt that with the introduction of more – otherwise untransportable – troop types, there was little advantage in keeping the original restriction.

In one case – that of the Tectorist Scouts – the army list entry has been brought into line with a rule amendment for these troop types. This is addressed in a separate rules update (April 2017).

The lists will be periodically updated into line with new publications. We’ll also consider any necessary adjustments or amendments in light of community feedback. However, our aim remains to provide lists for general play as described in the Antares rulebook. We respect that clubs and other organisations running tournaments to strict deadlines, perhaps on non-standard tables, may wish to make their own adjustments – and we encourage them to do so.

Finally, can I add my personal thanks to everyone who has contributed to developing these lists, and especially to Tim Bancroft both for his insightful suggestions and many hours of editing – thank you!

Get your FREE PDFs here: 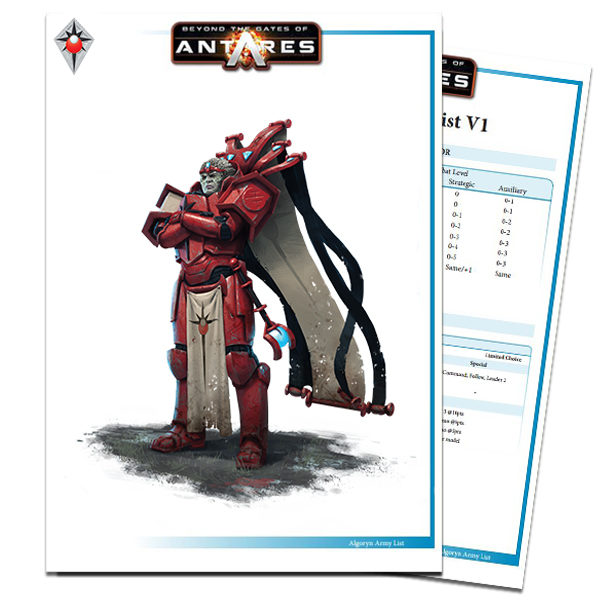 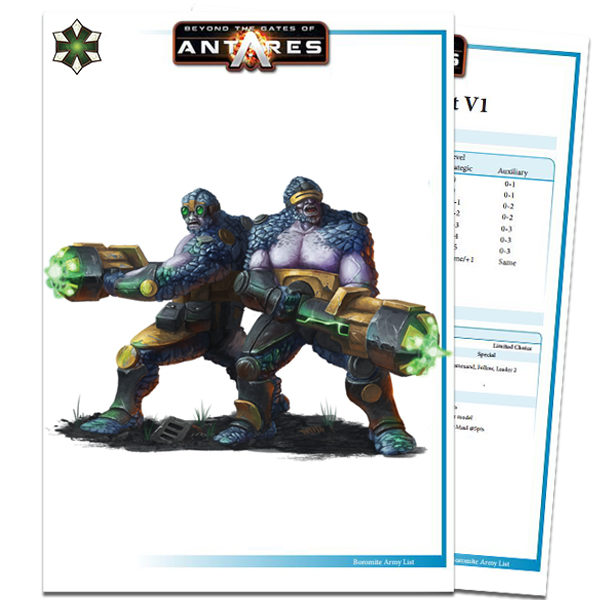 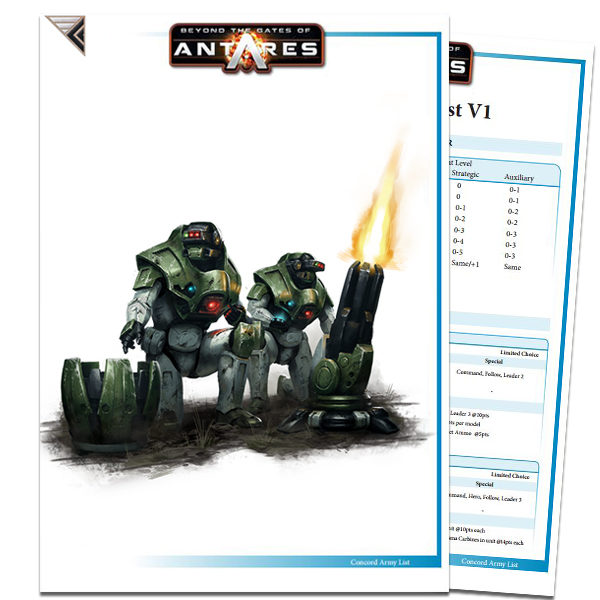 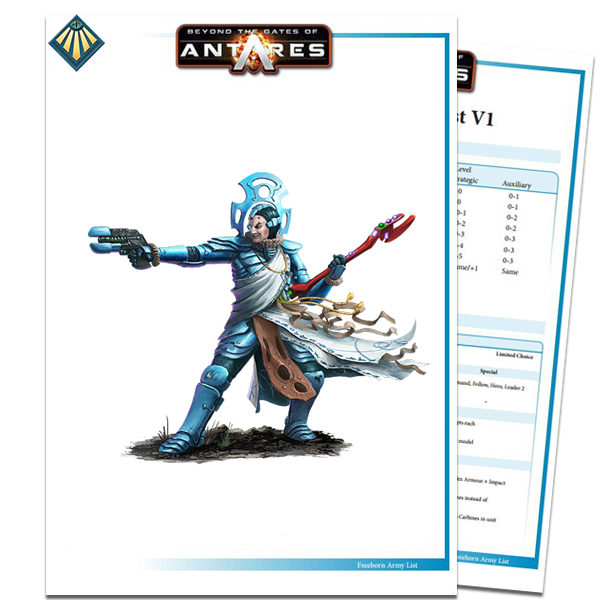 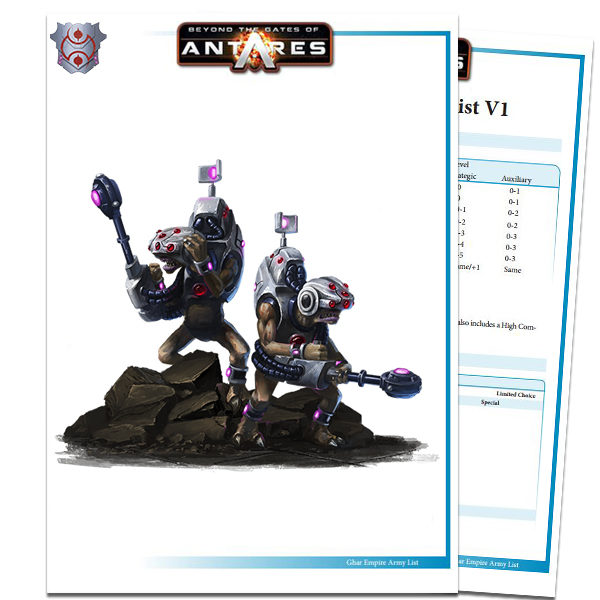 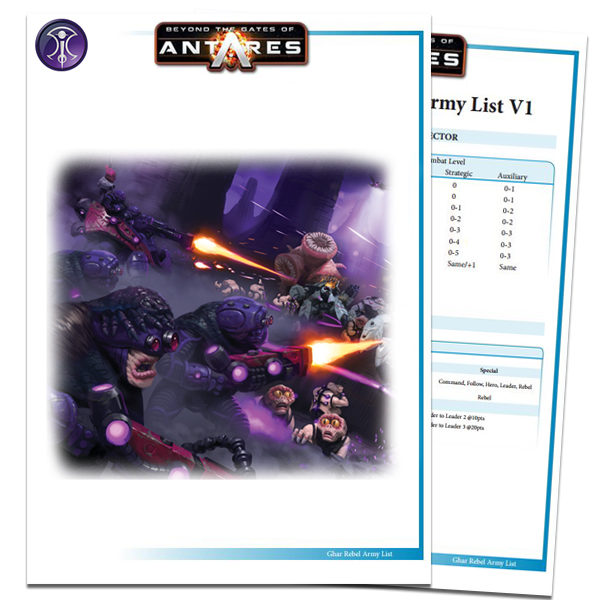 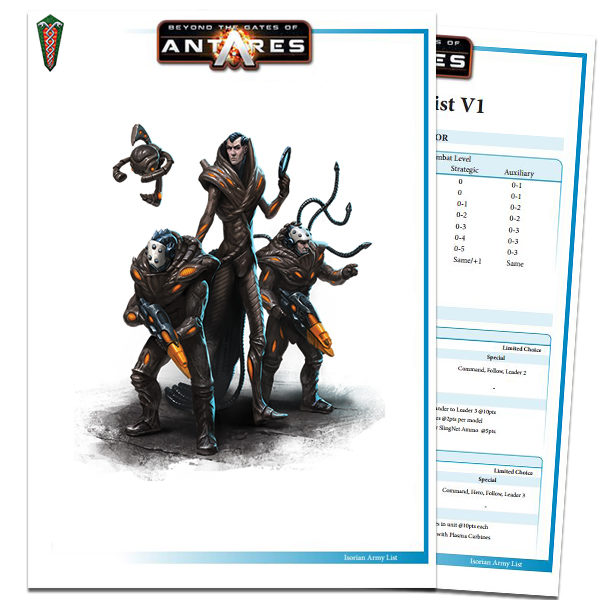 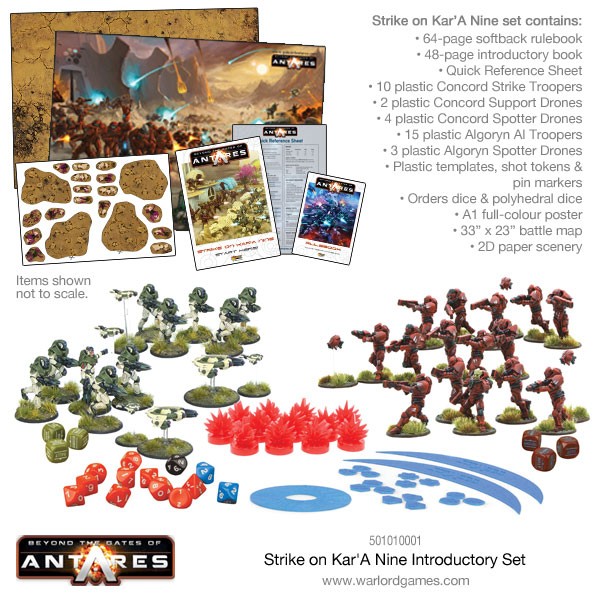 Algoryn99 Beyond the Gates of Antares594 Boromites67 Concord88 Freeborn70 Ghar62