Judge Dredd: The Judges of Mega-City One

We’re delving back into Mega-City One with a look at the personnel and equipment of the Justice Department. Enter the judges!

Across the Earth of the 22nd century, the planet’s population is concentrated in a small number of Mega-Cities. Each of these mammoth conurbations covers hundreds of square kilometres, their ever-growing populations squeezed into thousands of mammoth citi-blocks.

With the conventional model of government blown away in the Atomic Wars of 2070, control of these mega-cities now rests on the shoulders of the Judges.

Judges and the Justice Department

With crime rife and the criminal justice system no longer able to effectively catch, arrest and try the majority of criminals, the Judge system was first introduced in 2031. Empowered to judge and pass immediate sentence on criminals, this new breed of law enforcers made an immediate impact and soon the judicial model was adopted across the globe. 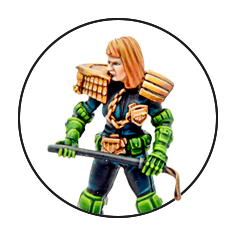 A rookie Judge is recruited as a child and benefits from years of exhaustive training before (hopefully) graduating at 20 years of age. Once they hit the street as a full Judge, they are the front line of law enforcement on the lethal streets of Mega-City One.

Whilst Judges are highly trained and well-equipped, they both inhabit and protect a dangerous world. Demonic, undead and/or alien invasions are real possibilities, as are apocalyptic wars. Temporal and interdimensional travel exposes the world to threats from across time and alternative realities. Even domestic robots have a penchant for bloody revolt. Having invested so many years and resources in the training of their new Judges, the Justice Department is keen to maximise the Judges’ chances of survival. For this reason, Judges are issued with the very best equipment available.

Upon graduation, Street Judges will be issued with the following equipment:

The standard sidearm of the Mega-City Judge, the Lawgiver can fire a variety of different rounds. These range from:

Judges wear toughened bodysuits, a variety of armoured pads and, of course, a helmet. This body armour is lightweight and durable enough to provide your tabletop Judges with heightened Resists stats, but not at the expense of their Evade.

Nothing says, ‘cease and desist’ like a truncheon to the head. 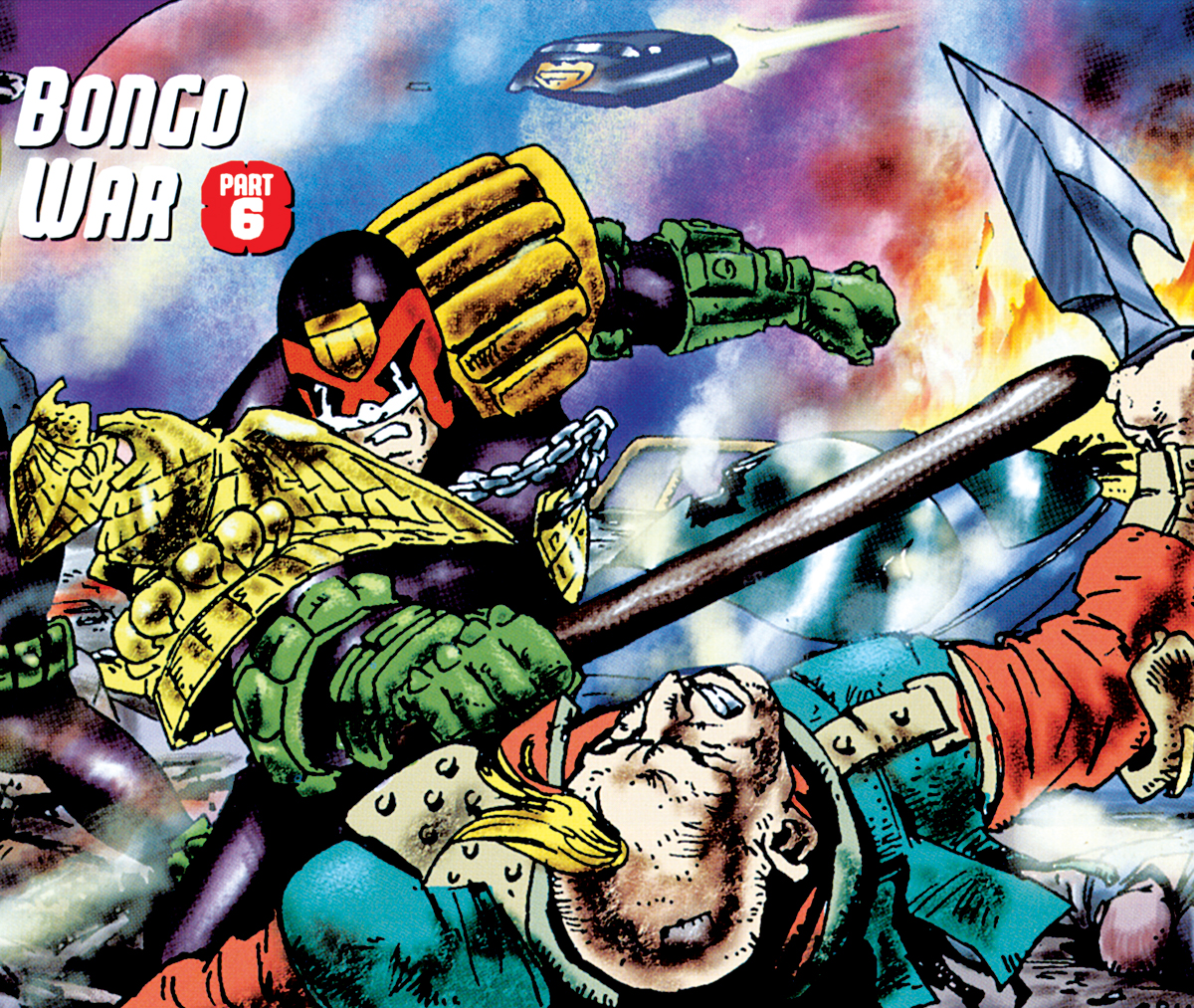 Strictly a backup weapon, the boot knife should be used to dissuade perps from further violence, or as a survival aid in inhospitable environments.

The standard mode of transport for Judges, the Lawmaster is an armoured motorbike fitted with bullet-proof tyres, a variety of weapons and a computer. This computer can control the Lawmaster autonomously, enabling the rider to dismount and leave the Lawmaster to act alone.

Other equipment may also be issued as required or requested. These items include:

Judges can be issued with a variety of other weapons and pieces of equipment courtesy of Armoury Cards. These items include ‘Birdie’ lie detectors, med-packs, respirators and more. Prudent use of these items is vital if Judges are to prevail in the face of the perps and creeps that lurk in Mega-City One. 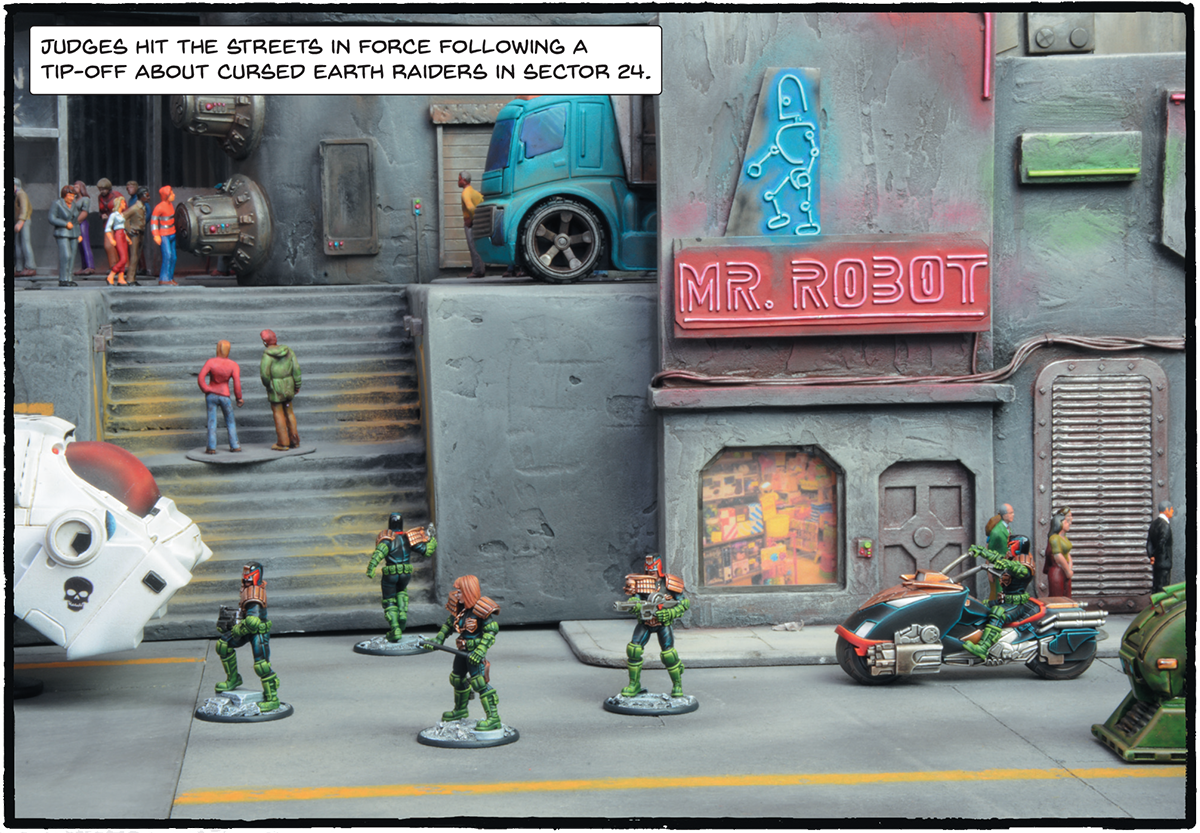 Not all rookies are destined to become street Judges. Some may show talents that predestine them to different posts within the Justice Department. Perhaps they show technical proficiency and are thus able to become a Tek-Judge? Those with a knowledge of medicine could be wasted in any role other than a Med-Judge, whilst others yet might be more suited to the dangerous glamour of the undercover Wally Squad or Accounts division policing. Some may even be selected to join the feared Special Judicial Squad, otherwise known as the Judges who judge the Judges.

More rarely, a cadet may manifest the gifts that allow them to join Psi Division. The gifts of such cadets vary wildly. Whilst some—such as the storied Judge Anderson—may be gifted telepaths, others may be empaths, pre-cogs or even witches and sorcerers. Whilst the qualifying talents may differ, Psi Division Judges are usually noted to be somewhat eccentric and, in some cases, troubled. Suicide rates amongst Psi Judges, for example, are the highest in Justice Department. 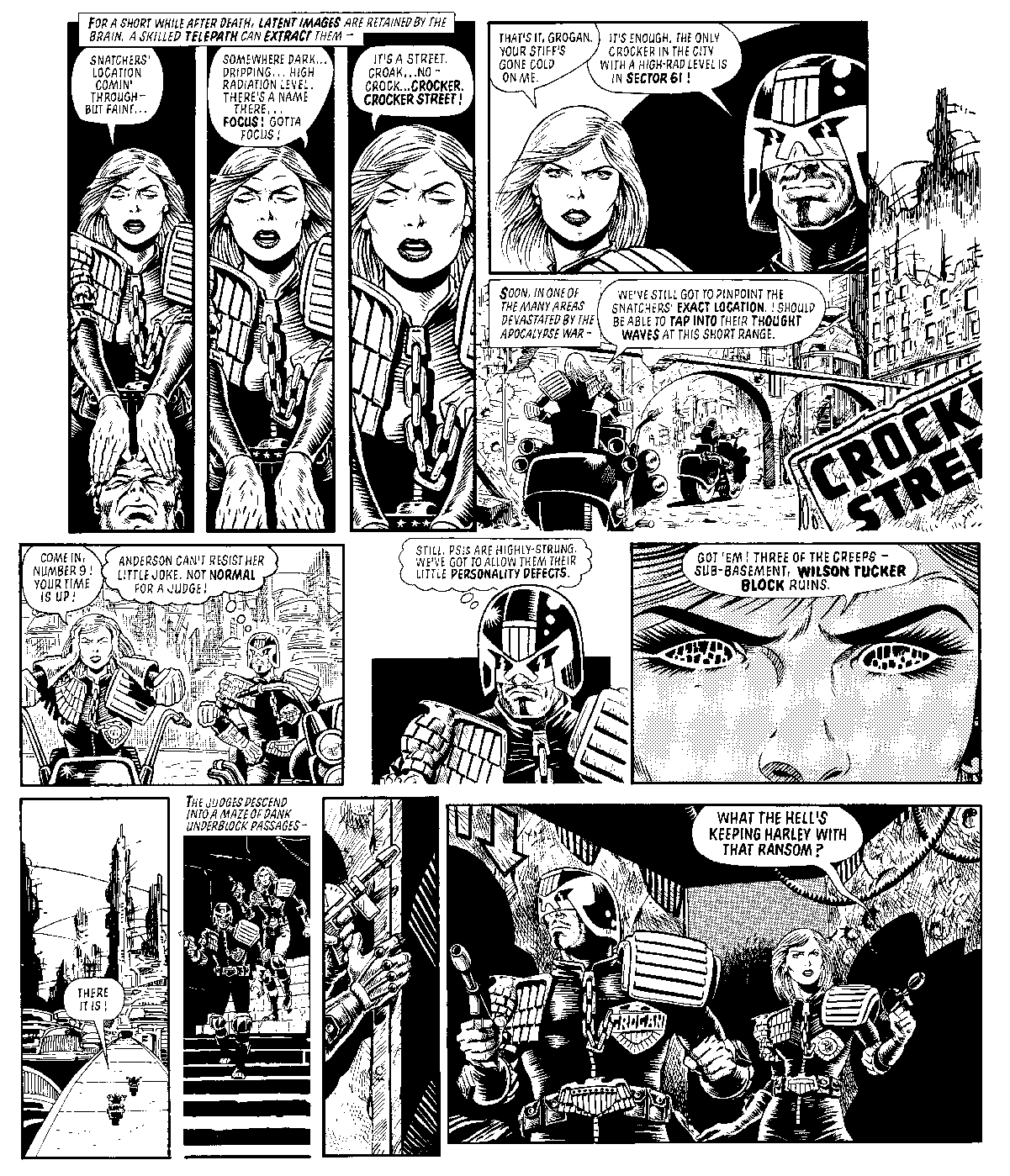 As might be expected, Judges’ stats and skill vary wildly depending on experience. Rookies are barely better in combat than a Block Gang Punk, but those rookies’ stats will increase steadily as they are promoted. Promotions are earned, as might be expected, by thwarting crimes, defeating perps and gaining Deeds. With enough Deeds and the right dice rolls, the ambitious rookie can soon be promoted to Street, Veteran or even Senior Judge.

Those who reach the rank of Senior Street Judge join an elite cadre of law enforcers boasting incredible stats and skills. Cadet Judges with the standard stats above can expect to at least double each of their stats by the time they reach the giddy heights of Senior Street Judge. Add to that a suite of skills such as Gunfighter and Brawler (a chance to return fire or strike back as a free action when attacked), Fortitude (ignore the effects of wounds and stun results), Respect the Law (a chance to intimidate perps within a certain radius) and Let’s Ride (ignore certain effects when riding a Lawmaster) and its easy to see why Senior Judges are a force to reckoned with in Mega-City One and beyond. 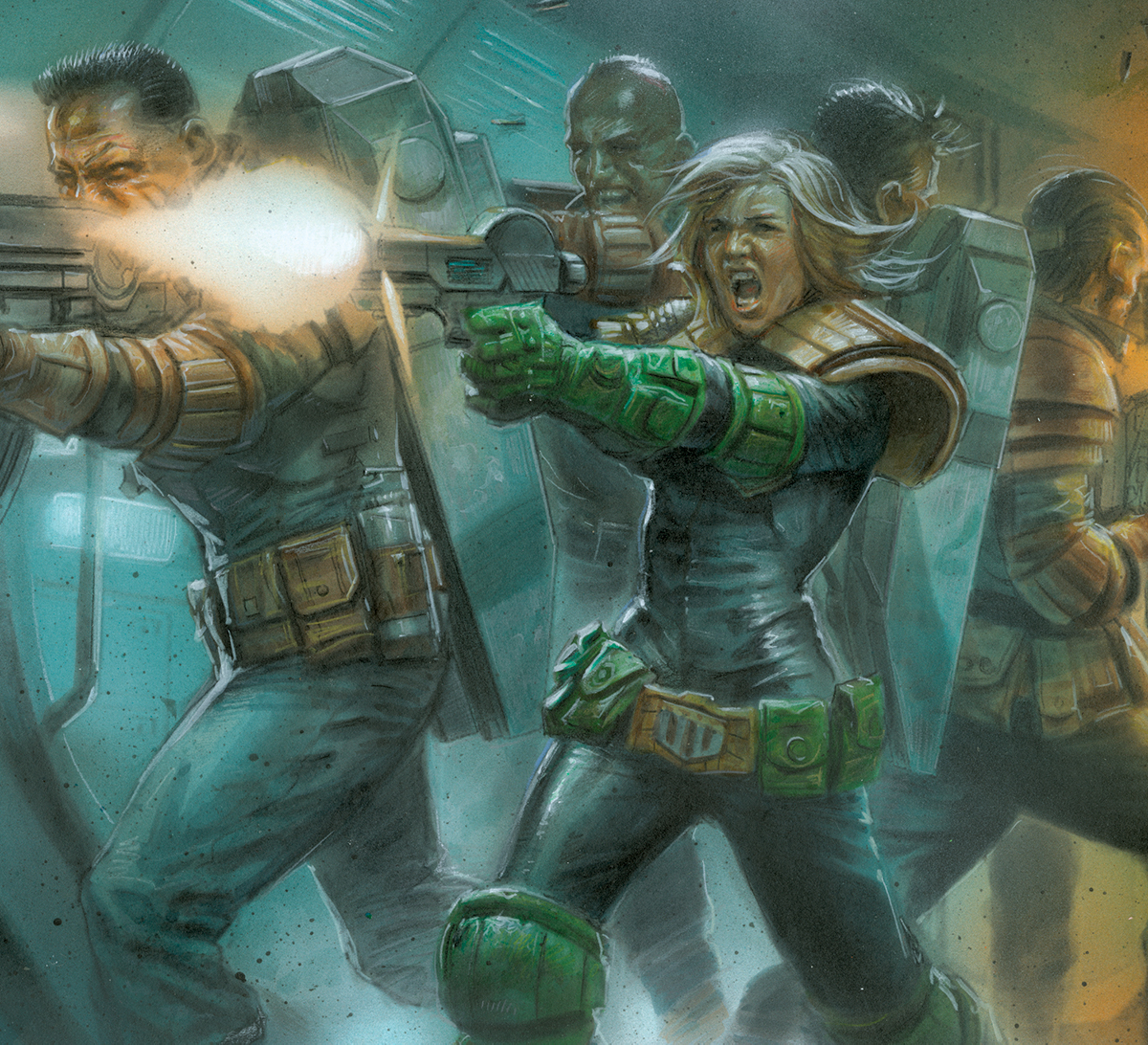 Let’s Be Careful Out there

Your Judges, however, will need those skills and improved stat lines if they are to survive life in the Big Meg. With the Judge Dredd Miniatures Game including rules and miniatures for some of the most dangerous individuals the world has ever seen, Judges will be pitted against the likes of Judge Death, Mean Machine Angel and Orlok the Assassin; perps who have faced Judge Dredd himself on many occasions. Any Mega-City One Judge must aspire to Dredd’s legendary levels of skill and determination if they are to bring justice to such legendary killers.

With Joseph Dredd himself to lead them, the Judges are ready to dish out Street Justice. 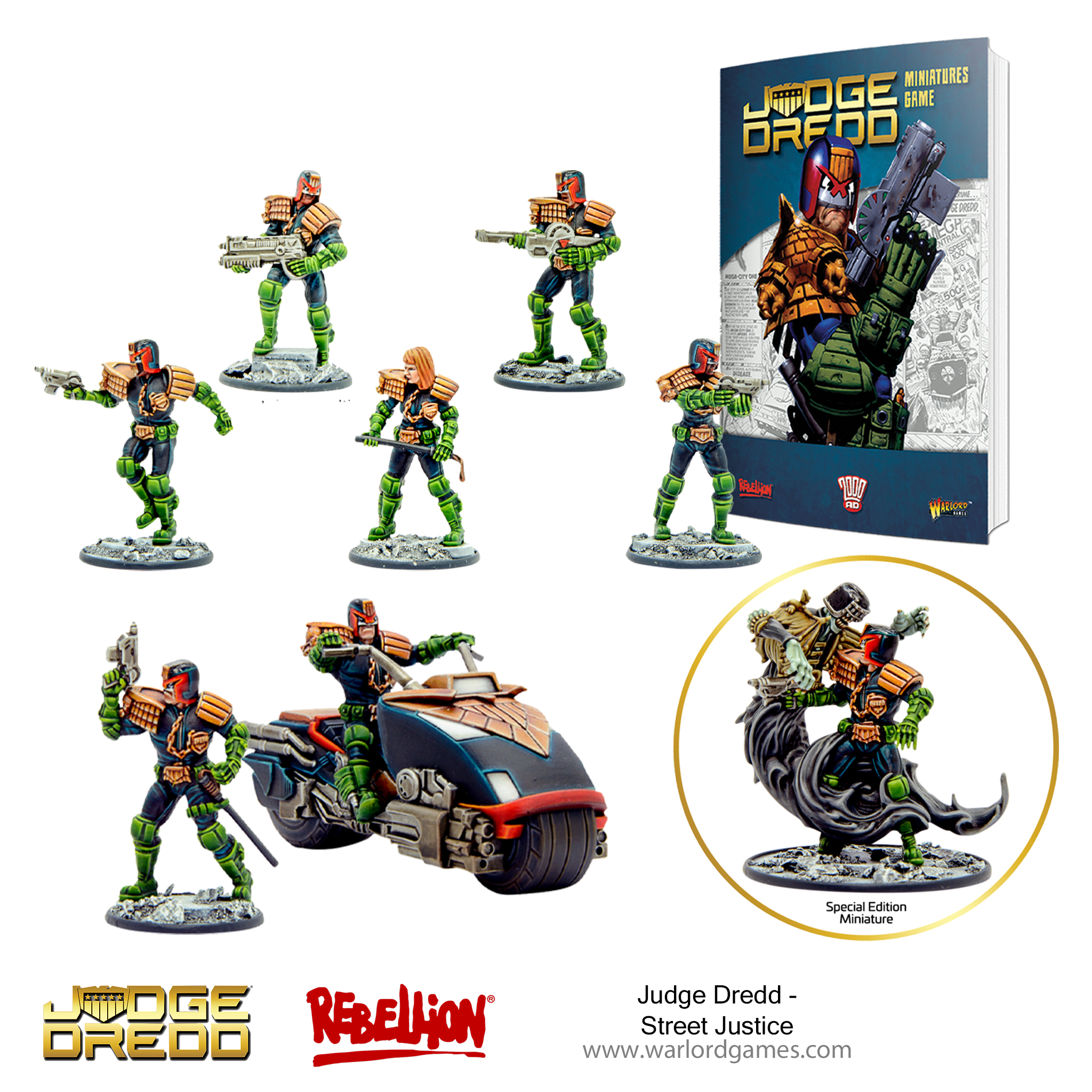 Dan can often be found contemplating the mound of unpainted minis building up under his desk. He has a tendency to roll lots of ones. He also has a tendency to complain about rolling lots of ones.
View Profile | View all posts by Dan Hewitson
Judge Dredd: The Deeds of Judge Joseph Dredd
Spotlight: Matt Bell’s Bolt Action GT Army