We spotted this Army at the Bolt Action 2019 GT. Its owner, Matt Bell, takes us through his inspirations for building the force.

Matt’s army is based around the defenders of the Battle of the Tennis Court, part of the larger Battle of Kohima, the turning point of the Japanese U Go offensive into India in 1944. Both of Matt’s grandfathers served in Burma and he pays tribute to both within his army. Matt tells us more:

Matt: When the tickets for the 2019 Bolt Action GT went on sale, I knew precisely what theme I would use for my reinforced platoon. However, partway through painting the army (which may itself make an appearance at a future GT) my wife said to me “Are you doing an army themed on the units that your grandfathers served in?” Well this got me thinking – both my grandfathers served in Burma, one in the ASCP driving laundry vehicles and the other a Captain in the 2nd Indian Air Supply Corps – so a Burma themed army was to be built – and most importantly it allowed me to buy new models.

So I started reading around and initially settled on a force based around the Battle of Imphal, but then I read into the Battle of Kohima and the background to the Kohima epitaph:

“When you go home tell them of us and say, for your tomorrow we gave our today”

Rather than try and model a specific platoon from the Battle of Kohima (mainly because the precise composition of the troops garrisoned there is unknown), I decided to try and build a platoon that represented the troops who had actively fought in the Battle of the Tennis Court.

The Defenders of Kohima

The Battle of Kohima was fought initially between the 1500 or so strong garrison under the command of Col Hugh Richards comprising: 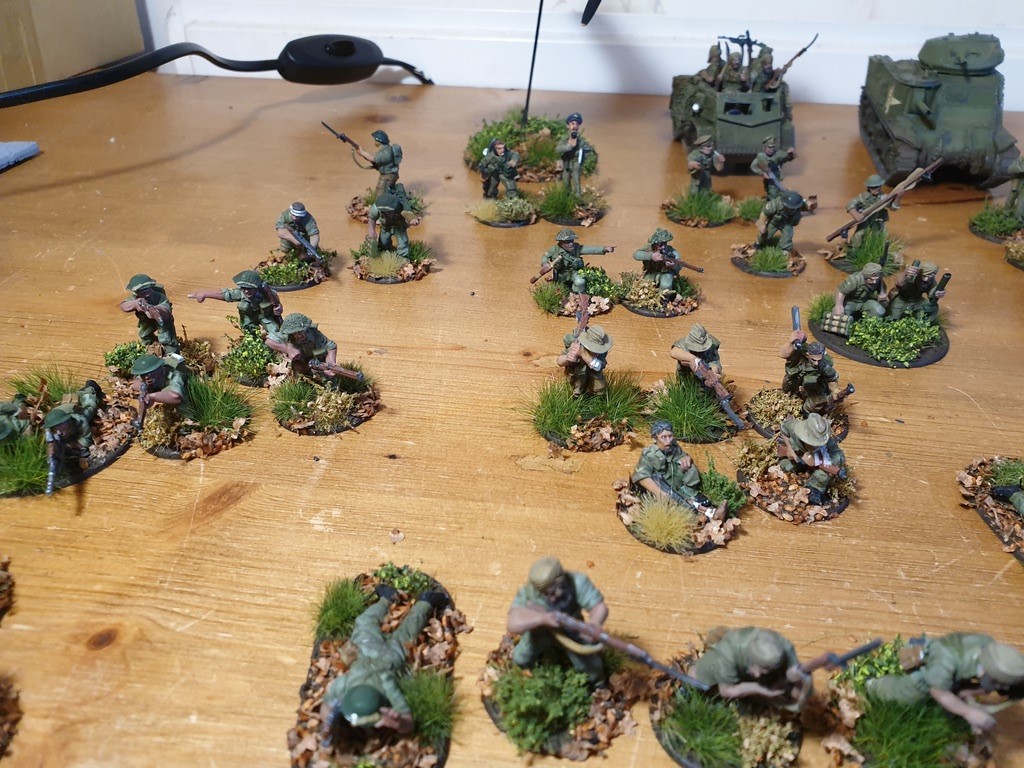 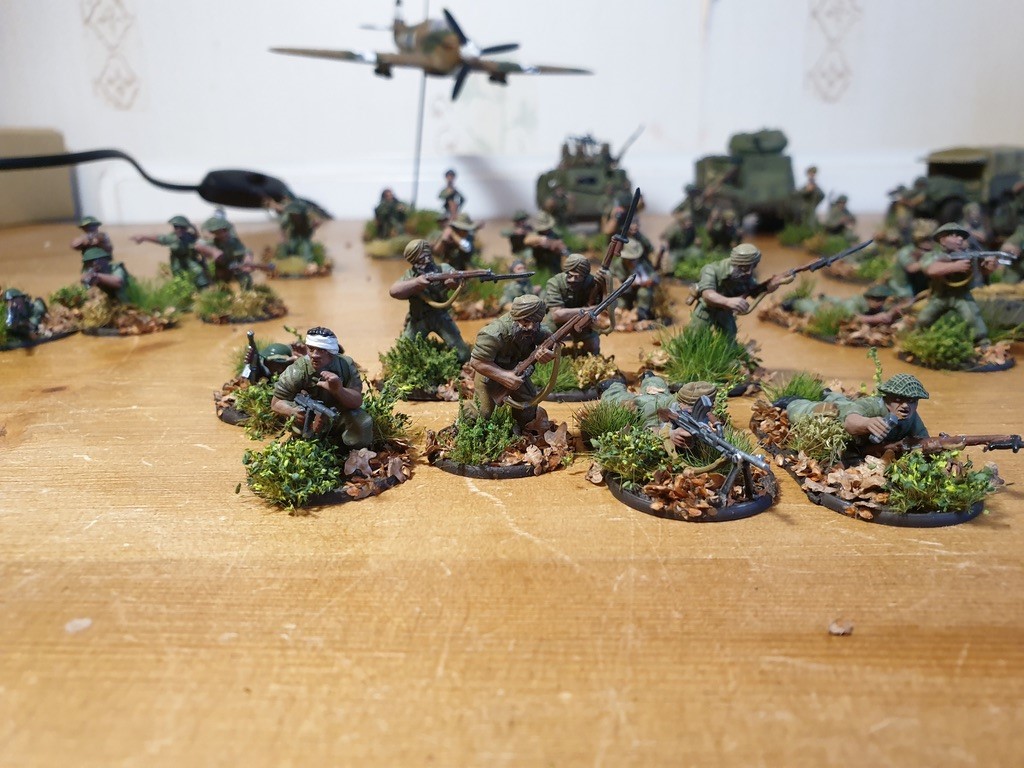 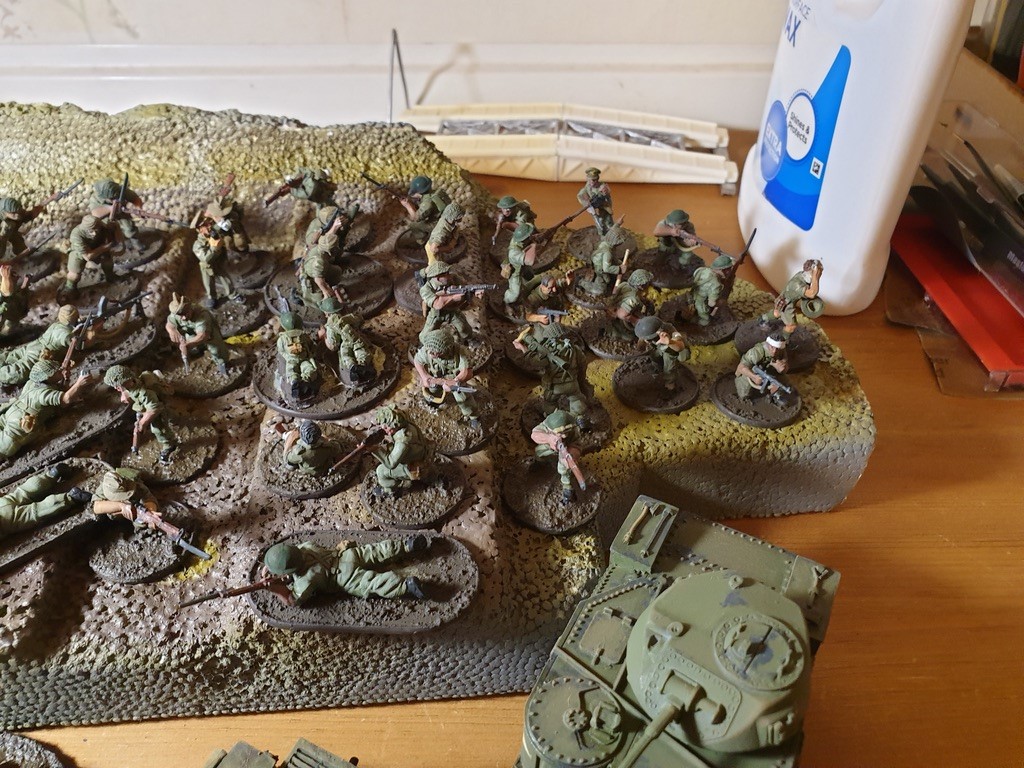 The Rest of my Force was made to represent the reinforcements to Kohima that began arriving once the siege was lifted. These would be the leading elements of the 2nd Division; part of Major Slims 14th Army, who had been transported 2000 miles across India by road, rail and air 31 days after receiving the order to redeploy.

The Battle of Kohima

The 31st Japanese division attacked the edge of Kohima in early April having travelled 160 miles in 20 days over very difficult terrain. The Siege of Kohima was established on the 3rd April 1944 when the road to Imphal was cut at milepost 73. The hastily prepared defences of Kohima had only been ‘fortified’ from 29th March and the British commonwealth forces had not been allowed to use barbed wire due to an agreement with the local Naga population.

One of my favourite stories was that of the tanks of the 149th RAC. A path was cleared up the steep hillsides and several tanks were dragged up the hillside using winches. Tanks led by Sergeant Waterhouse provided pivotal close fire support to clear the Japanese stronghold around the tennis court – having slid down the slope onto the court itself.

Much of the fighting centred around the Tennis Court in the ground of the district commissions bungalow.
The fighting in this area bore a similarity to the combat experiences of WW1 with hand to hand fighting common, with the opposing lines so close that grenades could easily be lobbed between them.

Major Boshell commander of B company 1st Royal Berkshires described it like this:

“To begin with I took over an area overlooking the Tennis Court… The lie of the land made impossible to move by day because of Japanese snipers. We were in Kohima for three weeks. We were attacked every single night…
They came in waves, it was like a pigeon shoot. Most nights they overran part of the battalion position, so we had to mount counter-attacks… Water was short and restricted to about one pint per man per day. So we stopped shaving. Air supply was the key, but the steep terrain and narrow ridges meant that some of the drops went to the Japs. My company went into Kohima over 100 strong and came out at about 60.”

The Battle of the tennis court ended on 13th May when the Japanese positions were finally cleared with support from the 149th RAC, the 2nd regiment of the 254th Indian Tank Brigade.

The Battle of Kohima ended on 22nd June when the road to Imphal was finally opened up.

Lieutenant Colonel John Young, the senior doctor, appeared in Kohima on foot, having walked through the Japanese lines to organize the care of the garrison’s many wounded. Young and the other doctors, two of whom were killed during the siege, worked tirelessly to save as many of the badly wounded as they could. By the end of the siege, the garrison had some 600 seriously wounded men lying in trenches awaiting evacuation.

High courage was a common value, and not only in the rifle companies. Throughout the siege, Chaplain Randolph tirelessly moved between the perimeter and the wounded, comforting and inspiring.

Lance Corporal John Harman 4th Battalion, Queen’s Own Royal West Kent Regiment was awarded the VC for his actions on the 8th/9th April during the Battle of the Tennis Court.

At Kohima, Assam, on 8th April 1944, Lance Corporal Harman was commanding a section of a forward platoon. The enemy had established a machine-gun post within 50 yards of his position which became a serious menace to the remainder of his company. Unable to bring the fire of his section onto the post, Lance Corporal Harman went forward by himself and singlehandedly annihilated it with a grenade, returning with the enemy machine-gun in hand.

The next morning, having first recovered a forward position, he again charged an enemy post alone, shooting four men and bayonetting another, thereby wiping out the post. As he returned Lance Corporal Harman received a burst of machine-gun fire in his side and died shortly after reaching friendly lines.

Additional support for my army is provided by 34th RAF Squadron (and the Air Observer – who is representing my grandfather who served in the 2nd Indian Air supply company) who provided air support to the battle. The USAF and RAF dropped supplies to the troops under siege (the planes flew without rear doors and the supplies were pushed out of the back). Sadly, these supplies often fell in Japanese lines, but the bravery and skill of the pilots cannot be under-estimated. The RAF and IAF flew many sorties providing close air support and strafing and bombing Japanese positions.

The driver of the tow for the 25pdr is representing my other grandfather who served with the supply corps (actually one of the heads to the British infantry set bears a striking resemblance to him).

Having completed my Army only one thing remained – something suitable to display them on. I know that a simple tray would have sufficed for the tournament but I thought I wanted something more permanent once I got back home. I decided to make a representation of one of the pictures of the battlefield: 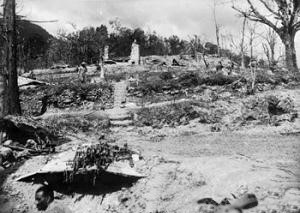 In order to fit the 1250pt army on the board needed to be quite big and, in the end, I settled on using a wooden tray from which the terraced slopes of the ground from the tennis court up to the clubhouse could be represented. Thanks must go to my wife who built the terraces and cut the steps – whilst I was busy finishing the painting in the run-up to the tournament. The damaged trees were modelled using dried sticks from the garden. 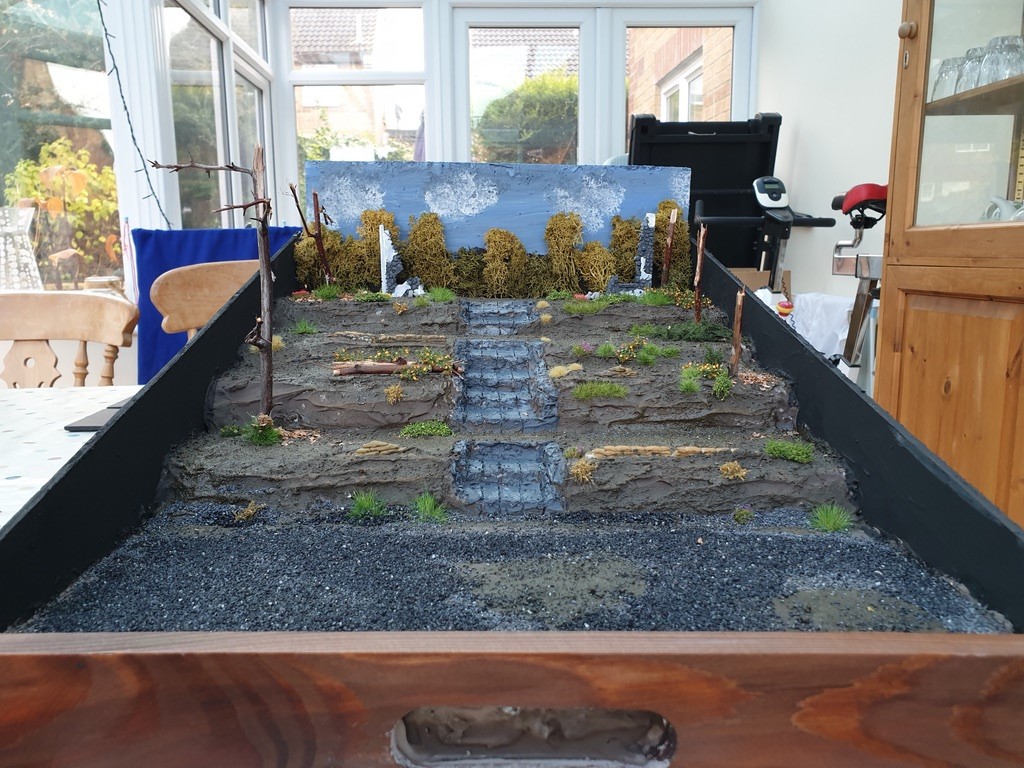 We think Matt’s finished army and display looks spectacular. You can see for yourself below: 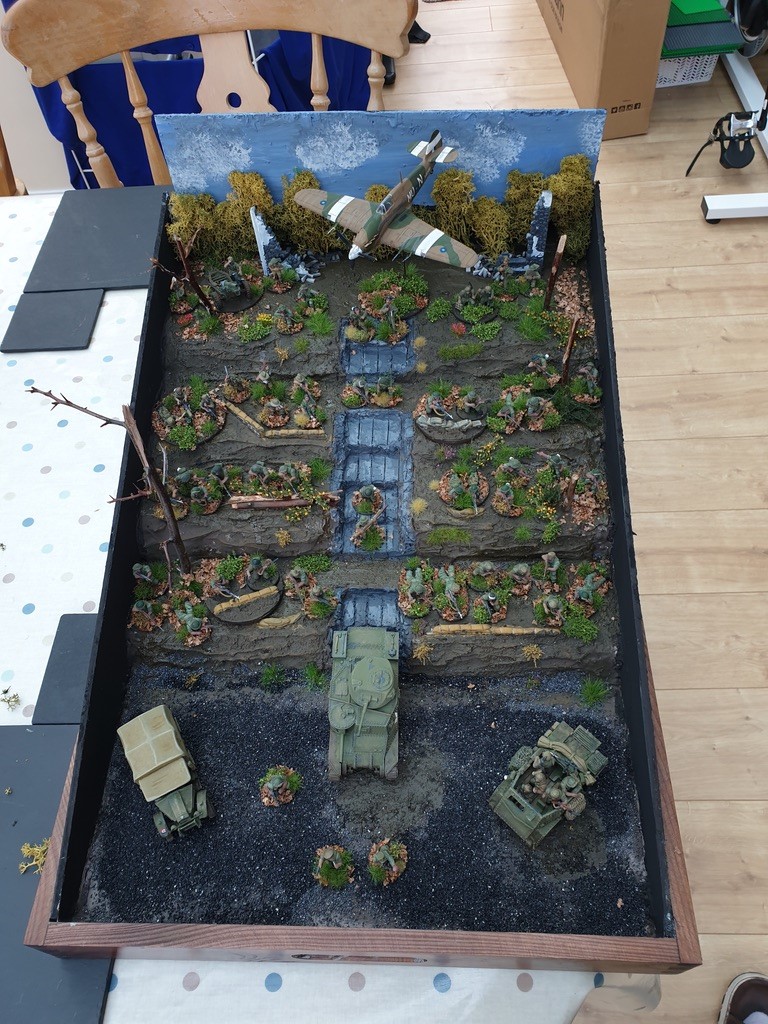 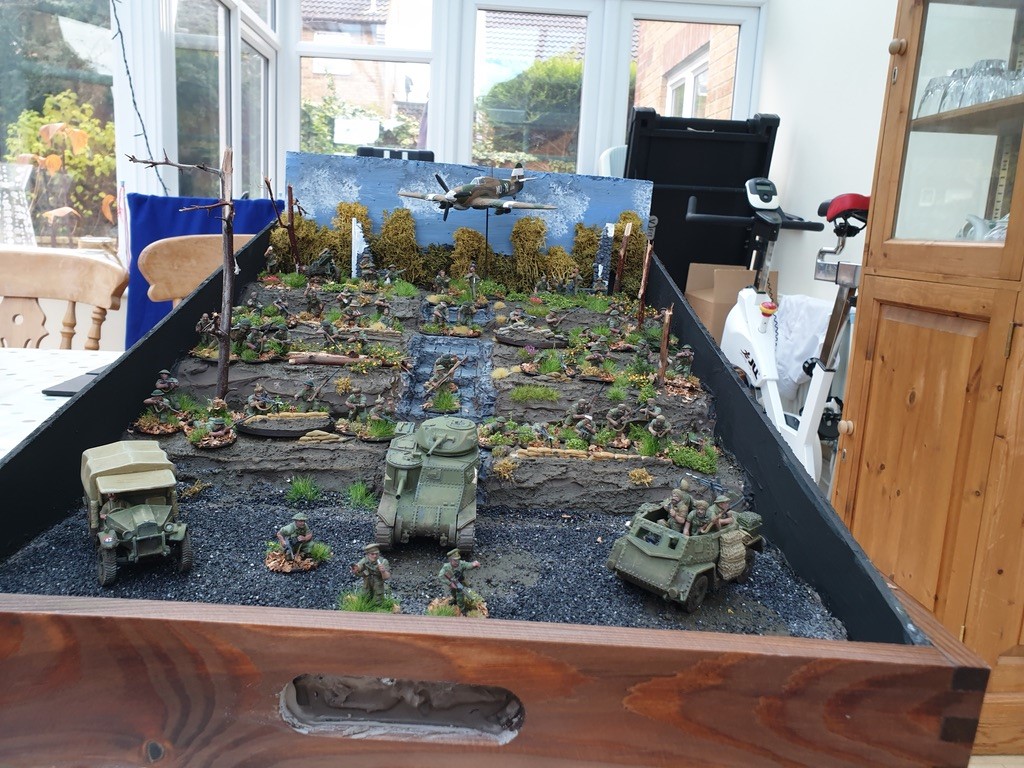 Do you have your own themed army you’d like to share? We’d love to feature them. Send some photos along with details about your army to armies@warlordgames.com

Dan can often be found contemplating the mound of unpainted minis building up under his desk. He has a tendency to roll lots of ones. He also has a tendency to complain about rolling lots of ones.
View Profile | View all posts by Dan Hewitson
Judge Dredd: The Judges of Mega-City One
River Horse: Tails of Equestria – Ogres & Oubliettes