In some places, British and Canadian Troops were able to quickly engage the enemy due to the high tide...

Canadian soldiers served in the British 8th Army and earned a reputation as troops to be reckoned with, both in Sicily and in Italian battles at the Moro River, Ortona, the Gustav Line, the Hitler line, and the Gothic Line. In total, 92,757 Canadians served in Sicily and Italy, 1943–45, of whom 26,254 became casualties. It was Canada’s longest ground campaign of the war.

Canada committed the remaining formations in Britain to northwest Europe in 1944. The 3rd Canadian Infantry Division and 2nd Canadian Armoured Brigade were the main forces to land on Juno Beach on 6 June 1944, well supported by British forces comprised of Commandos, the Royal Marines Armoured Support Group and elements of the 79th Armoured Division. The Canadians faced tough German defences on the beach, with some assault companies suffering over 60% casualties.

The 1st Canadian Army became operational in Normandy in late July 1944, with the Canadian II Corps and the British I Corps under command. The Army played a key role in the Normandy Campaign, fighting in the tough, additional battles around Caen and in the closing of the Falaise Pocket. The 1st Canadian Army was on the left flank of the Allies during the liberation of France and the advance to the Rhine. It was involved in very tough fighting to clear the channel coast and then the Scheldt Estuary to allow the Allies the use of the port of Antwerp. The Army defended in the Netherlands along the Maas River from December 1944 to February 1945, as the Allies paused to consolidate and deal with the German attack in the Ardennes. 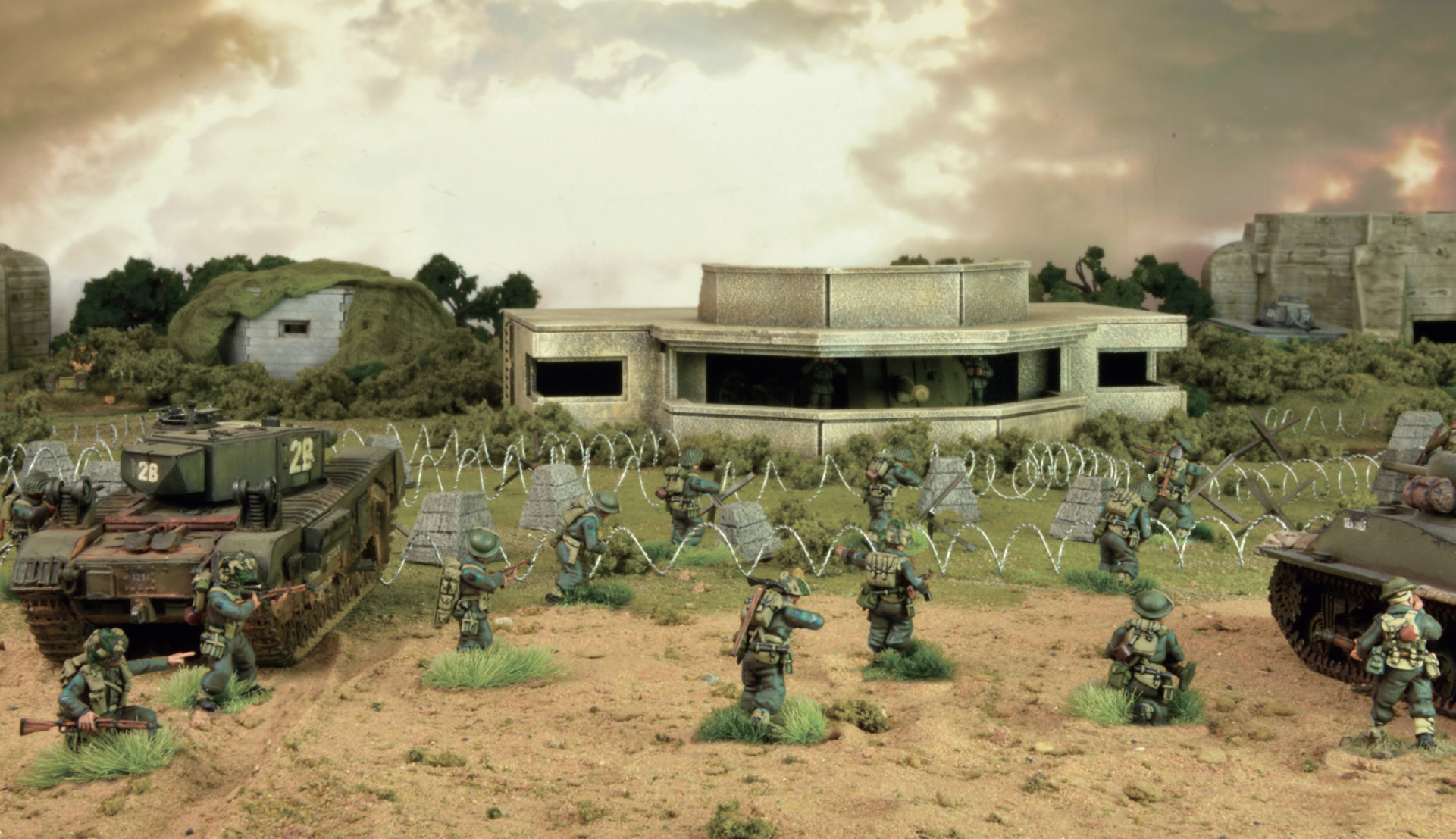 Gold Beach, the central landing area of the five beaches and the westernmost of the British sites, was assaulted by the British Second Army at 0725 on the morning of 6 June, led by 69 and 231 Brigade Groups of the 50th (Northumbrian) Division and supported by the specially modified assault vehicles of ‘Hobart’s Funnies’ and 4 Special Service Brigade, composed entirely of Royal Marine Commandos. The assault on Sword Beach was led by 8 Brigade Group of the British 3rd Division, also supported by ‘Hobart’s Funnies’ and the elite troops of 1 Special Service Brigade. They landed at 0726, charged with pushing forward off the beach and advancing some 10 km inland to capture the vital city of Caen. In between these two beaches was Juno, where soldiers of the 3rd Canadian Division, supported by the 2nd Canadian Armoured Brigade, ‘Hobart’s Funnies’ and the Royal Marine Commandos of 4 Special Service Brigade, landed at 0755 after being delayed by poor weather. Opposing the British and Canadian soldiers were the men of the German 716th Infantry Division, a unit that had existed for three years but had very little combat experience. For a far more detailed insight into the beach landings themselves, look no further than Campaign D-Day: Overlord.

By dusk on 6 June, all three British and Canadian beaches were secured with men and machines pouring off landing craft at an increasing rate. Whilst the sites were secure and the initial day’s main objectives had been achieved, in places the Allied beachhead was as slim as only one mile inland and German reinforcements were rapidly bolstering the defensive line. One of the most vital objectives of D-Day – the capture of Caen – had not been achieved. Post war estimates of British casualties were quoted at up to 3,000 dead, wounded and missing, whilst Canadian casualties were at least 1,096 (RCN casualty records were lost), 381 of whom were killed. German casualty estimates from actions against both the British and Canadians, and the US Army, vary between 4,000 and 9,000. Whilst the first day was undoubtedly a success for the Allies, the overall success of Overlord was far from assured.

The D-Day: British & Canadian Sectors campaign book focuses on some of the key clashes fought in Normandy in the summer of 1944 as British, Canadian, Polish, and other Allied forces engaged in desperate battles against a dedicated and determined German opposition. As well as summarising the history, this book also details a number of scenarios inspired by the engagements within the Normandy campaign, and the special rules required to play them.

This book tells the story of the British and Canadian contribution to this monumental task, and the stoic German resistance they faced. It guides Bolt Action players from the latter stages of D-Day, beginning with the fierce fighting in the coastal towns off the beaches at Gold, Juno and Sword, through the violent clashes around the strategically vital city of Caen, and to the march against Germany itself.

Inside, you’ll find thirteen diverse scenarios, covering the action from the first pushes inland, to the dramatic climax of the campaign in the British & Canadian sectors during Operation Tractable.  We’ve also included army lists for four of the campaign’s most important forces – the Canadian Army, the battle-hardened Commandos, the fanatical 12th SS Panzer Division ‘Hitlerjugend’, and the Luftwaffe Field Division. These new army lists add a whole new dimension of play, allowing you to create themed forces for your campaigns in Normandy!

We’ve also included a whole stable of new special characters, including the VC-winning medic Corporal Frederick Topham, who put life and limb on the line to rescue wounded men, and the fanatical Kurt ‘Panzer’ Meyer, who earned his Iron Cross leading the Liebstandarte division’s reconnaissance battalion in Russia. These special characters are the perfect opportunity to theme your force further and make for amazing conversion opportunities. 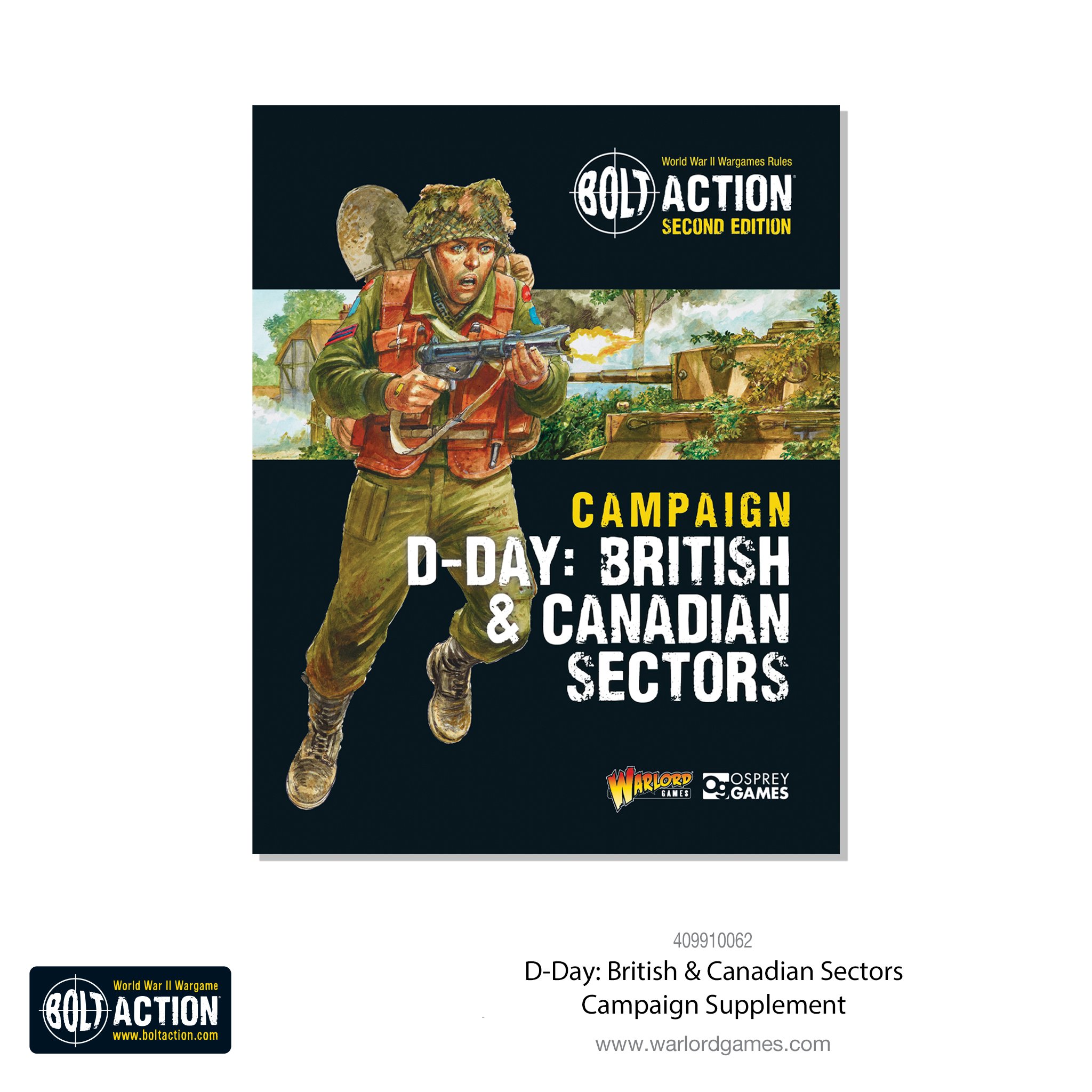 Containing no less than 36 of the new highly customizable plastic infantry, supplemented by weapons teams, transports and a Churchill tank (itself highly customizable as you can build any one of seven variants) this starter army boxed set gives you a highly effective and balanced starting force for a British or Canadian army. 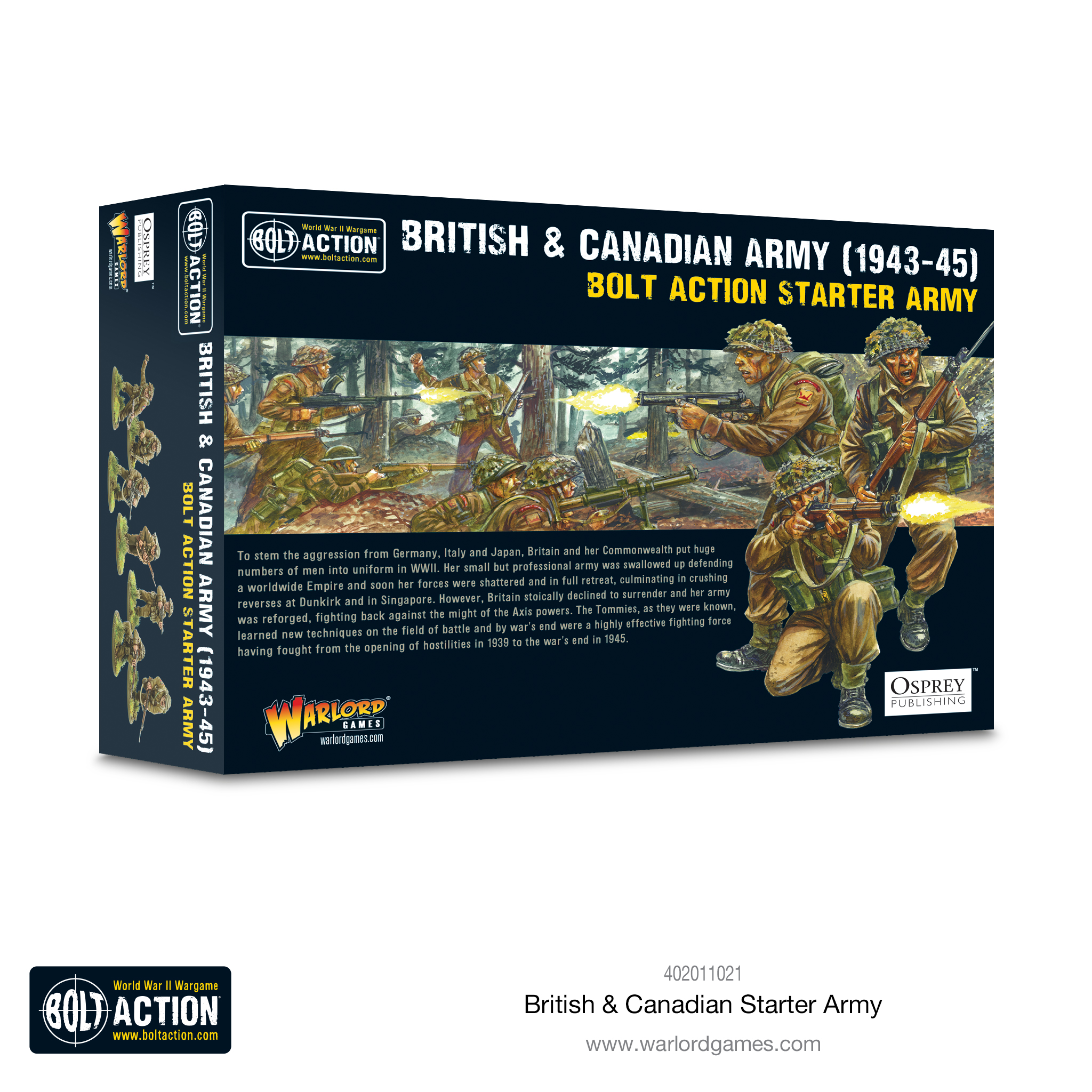 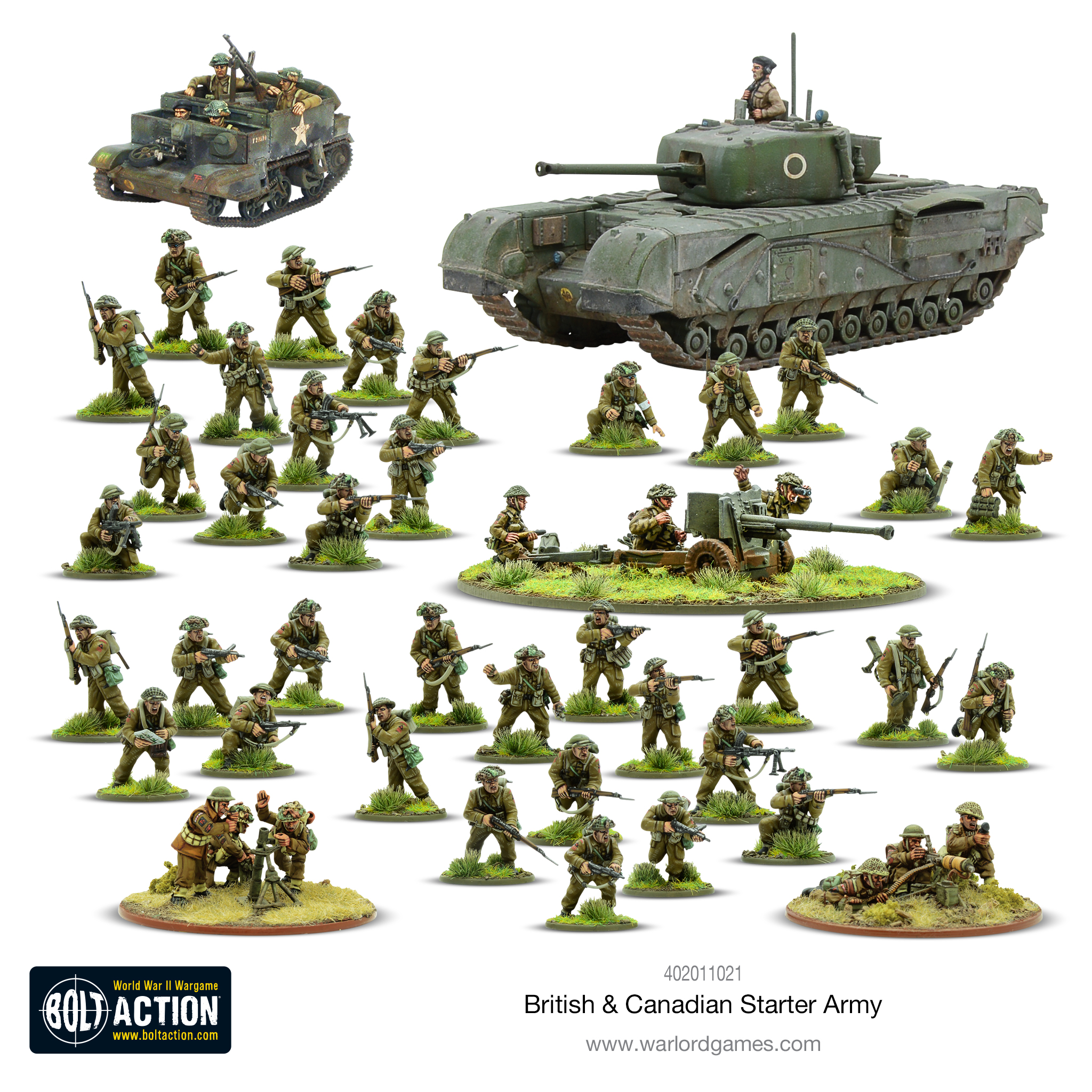 Dan can often be found contemplating the mound of unpainted minis building up under his desk. He has a tendency to roll lots of ones. He also has a tendency to complain about rolling lots of ones.
View Profile | View all posts by Dan Hewitson
Bolt Action FAQ: January 2021 Update
Victory at Sea Rulebook: A Preview