Ken Redington recently popped together a Finnish force using the existing Finns but also cleverly adapted the Blitzkrieg Germans to fit in and expand his unique army: 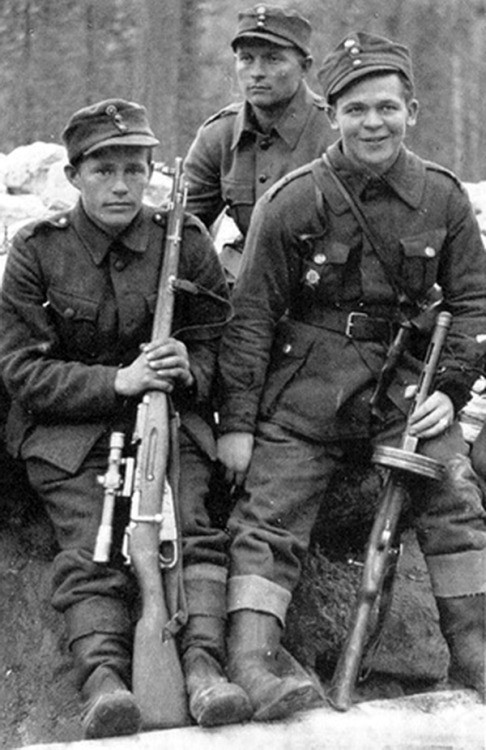 Ken: They are out! The Finns have come back out in a new way (typically just after I started my new army!) and with a great choice of both German and Russian armour, heavy weapons, and support units, it’s a very flavoursome army choice to make! 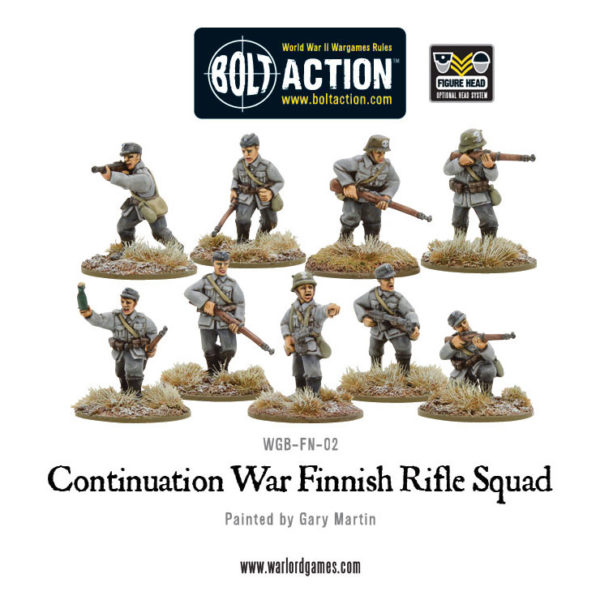 But you still need infantry…lots and lots of infantry. Here is a quick way I’ve used to flesh out an army with a good variety and still have the proper look about them.

I used plastic German sprues with Soviet weapons. The uniforms are close, equipment is the same, and they used lots of captured soviet gear. A scratch-builder’s dream and an easy conversion project.

Now let’s take a crack at this and see what we can come up with.

First there are 3 different sprues available for German troops and I had to look at each for usefulness. The mid-war German plastics (available as a sprue only) is passable, but the boots need to be altered as they are the low boots with ankle wraps. The late war Germans (newest sprue set) were way out so I passed on them. leaving the Blitzkrieg sprue, This has a close match on the uniform but has a gas cap package in the middle of the chest. Boots are correct though so I went with that one. 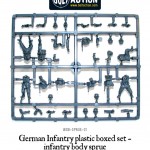 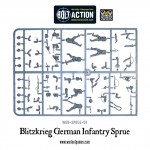 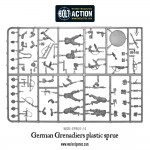 I started with 2 sprues of Blitzkrieg Germans, 2 sprues of mid-war troops, some sprues of Finnish Heads with caps, and 3 sprues of Soviet weapons. 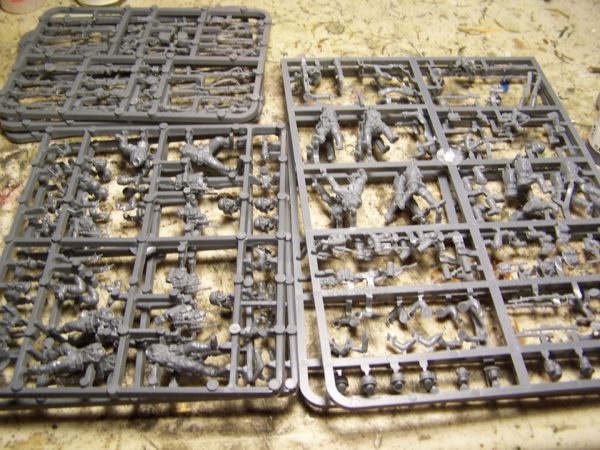 Uniforms were right for the most part but I need to remove the gas cape package on the chest. 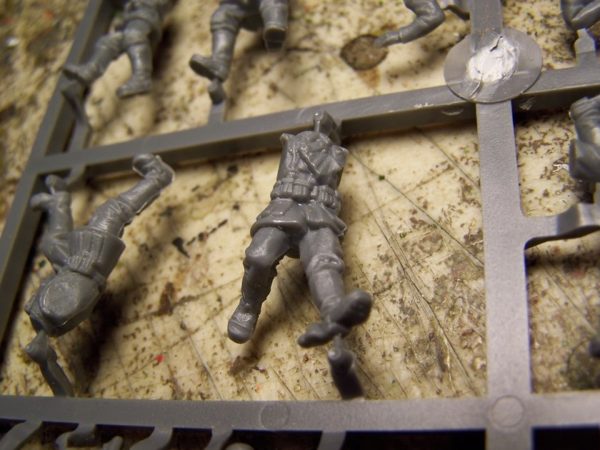 I did some light carving with a sharp knife and removed the package. This does leave a large bare spot in the middle of the chest where it would have been so I will have to do some creative painting to make it less noticeable. After assembling the troops I used Finnish metal heads to finish them off before priming and painting.

For painting, I used summer colours so had a light grey tunic with dark grey trousers. Each squad was assembled using 8 Nagant rifles, a LMG, and a SMG from the Soviet weapon sprue. For equipment I trimmed the canteen and gas mask off the bread bag or used a few spare bags I had from a Japanese army project. Canteens were an issue as I had nothing close so went without them in the spirit of an EASY conversion project.

Here is the finished product next to a wartime picture: 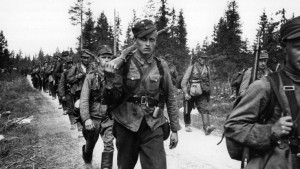 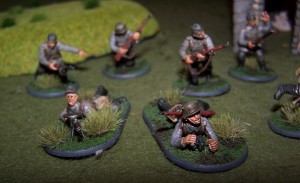 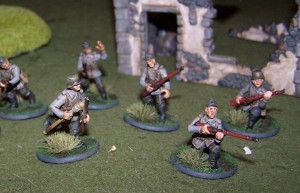 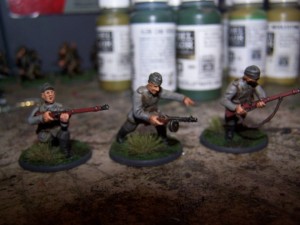 As a side note I used the Soviet LMG for the squad as my reading led me to understand that the Finns were a poor country and used about anything they could get. Also their LMG was difficult to clean and temperamental so a Soviet gun was a normal replacement for it. 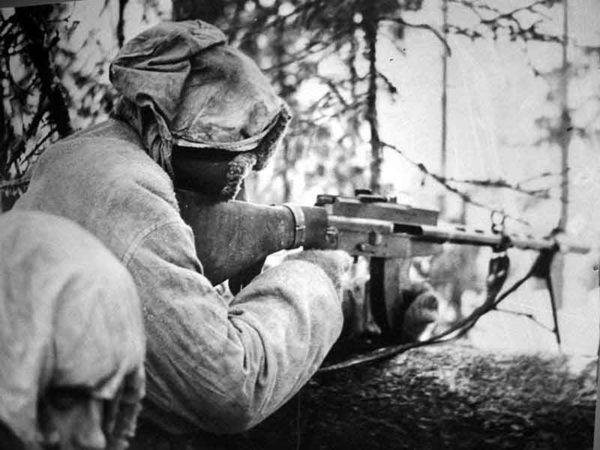 To fit in with the Finns I used a hobby sander and sanded off the buckles on the spats (the boot wrap buckles) and made them look more like one piece boots. 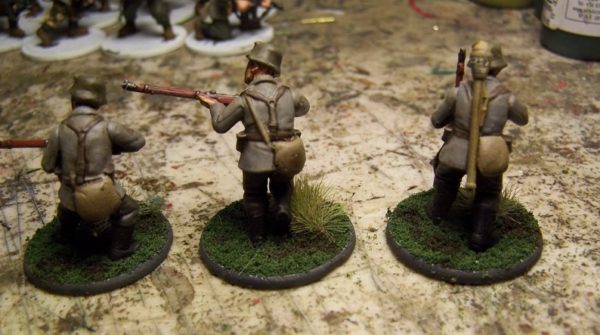 Other than trimming canteens and gas mask cases, equipment was pretty straight forward, I used some putty to add a few bread bags from scratch. All in all a straightforward conversion done quickly without too much work. Painting was straight forward again using summer colors for the uniforms, though I was tempted to go with winter uniforms as the figures have a bulkiness to them that would work well for winter. 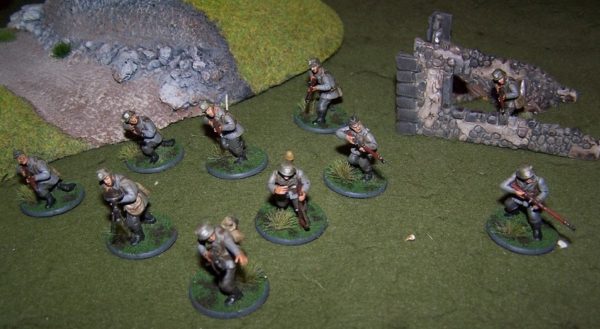 So, for adding more units to your Finnish army, using plastic Germans is a good way to go. Conversions are simple and equipment was close in look. Also feel free to throw in Soviet equipment as they used whatever they could get due to supply issues.

Now mixing the two squads together you can see they match pretty well, so both sprues can be used to extend your Finnish troop choices and give you more rifles to field. 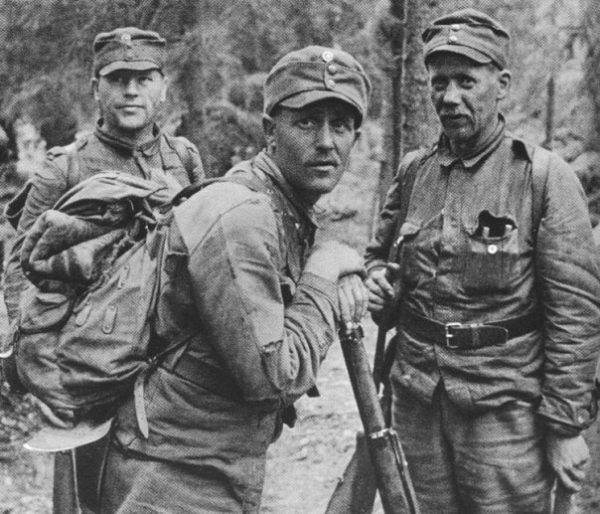 For those who want to put a little more time into the conversion I would suggest canteens using the Warlord Japanese versions. The same goes for more putty bread bags to give the figs the proper look.

Other things I have learned in my quick research include the fact that they were required to supply their own belt knife. This means each figure could have a sheath knife on their belt. Due to the loose guidelines though they should perhaps be a mix of knives and not all the same type. Some of the plastic Viking and Saxon figs available have such knives and could be good for the conversion.

Also adding a bit of Soviet equipment to your figs will help to dress them up a bit. Packs, bags, and weapons were not unlikely due to their supply issues and available equipment. Take Finnish tanks for instance, they used all the captured ones they could get! 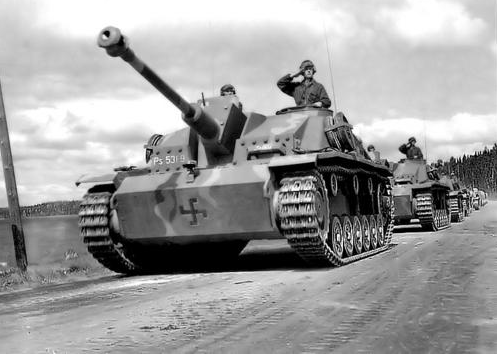 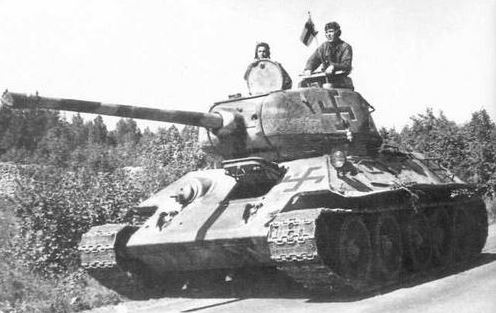 Having had a good rummage across the net I came up with a couple of sites of interest, if you find other sites post them up on the Warlord Forum:

I hope this article will help you flesh out those rifle squads and see you on the field. 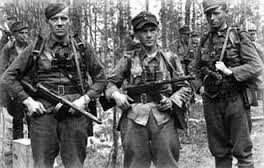