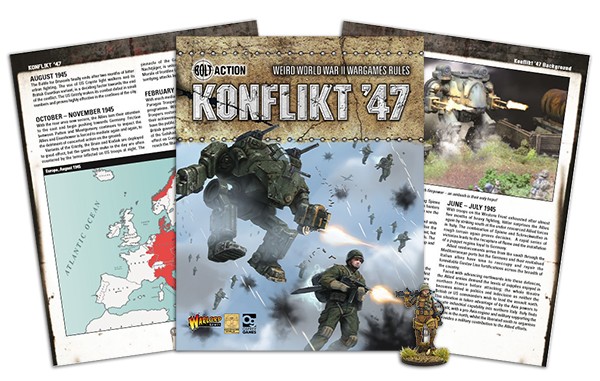 Konflikt ‘47 is set in a world very much like ours; in fact, until the middle years of World War II its history is nearly indistinguishable from our own. However, in 1943 the order of the world changed with the development of atomic weapons.  The testing and use of these weapons set in motion a chain of events that would forever change the nature of the conflict and directly lead to the situation detailed in this book.

In 1943, the US Manhattan programme under Robert Oppenheimer made rapid progress in developing the joint Canadian/British atomic energy programme into a weapon that could hopefully win them the war. The testing of a prototype device at the Los Alamos Laboratory in New Mexico yielded a workable weapon in early 1944. It also, however, produced a side effect that changed history forever. At the test site, a Rift in the fabric of space formed at the heart of the detonation. As with the Rift left after the Dresden bomb, these Rifts stabilised over a matter of days and remain in place nearly four years later.

The Konflikt ’47 rule book is a stand-alone rules set designed using the Bolt Action World War II tabletop wargame.  It contains all the rules, background and forces needed to play an alternate history or science fiction wargame set in 1947 using a fictional variation of history. As with all Warlord Games books that you buy direct from the Warlord Webstore you’ll receive a FREE special edition figure… Introducing Slammer Samuels, Paragon Trooper! 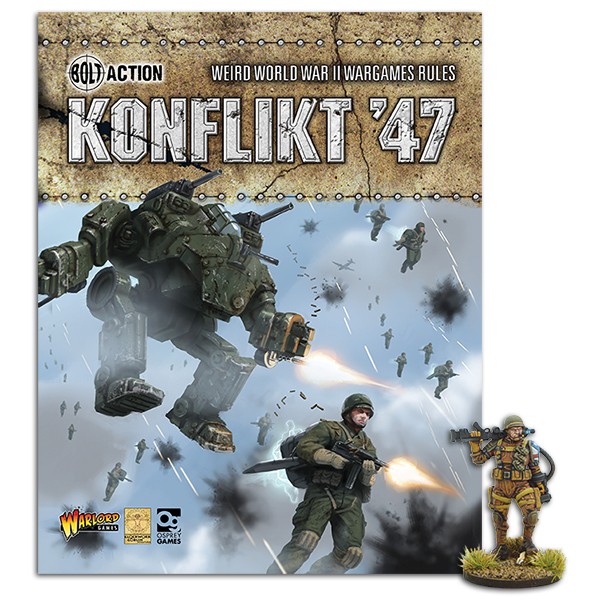 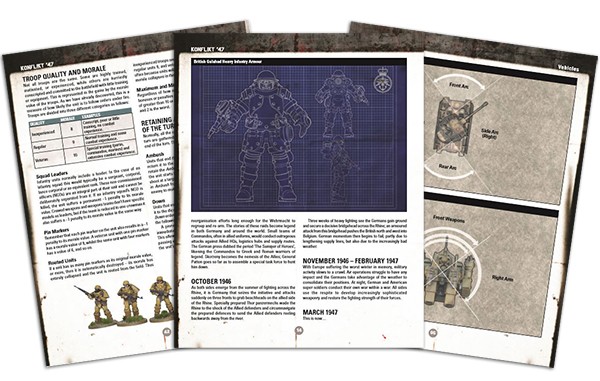 Warlord Games have worked closely with Clockwork Goblin Miniatures to bring you Konflikt ’47 SHIPPING NOW!
Written by Chris Hale and with fantastic artwork by Jon Cave and Russ Charles this mighty 208 page rule book contains the complete background and rules to play 1947 weird WWII with your Bolt Action forces.

The book is divided into three sections: the first covering the background to the Konflikt ‘47 universe; the second covers the rules required to play the game incorporating the technological advances found in the setting); and finally, the Army Lists together with variations to the national Army Lists to allow their inclusion and use in the game. Players familiar with Bolt Action will find a few changes that we think will add to their enjoyment of the game.

From personal armour to mech walkers you’ll have a full range of equipment to chose from before battle. These all of course add to your existing Bolt Action forces. The US and German Armies receive their starter sets first (with a mini A5 size rule book to utilize through out your battles and keep your lovely full size hardback rule book in good order) Whilst the British and Soviets will be getting theirs later in the year. 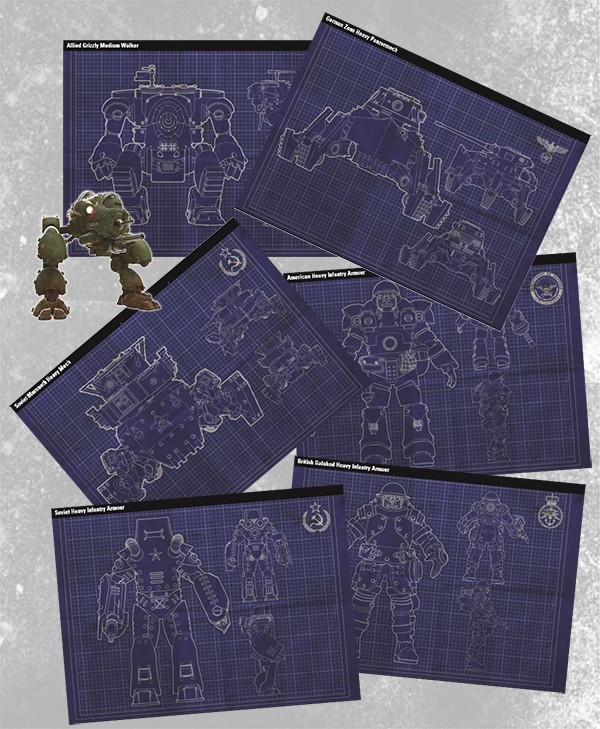 New weaponry appears in the form of the Tesla Cannon, Schwerefeld Projektor (a gravity pulse weapon), and the Zvukovoy Proyektor (a shockwave weapon). With full background and easy play special rules for every weapon. For example: the Tesla weaponry, developed by Nikola Tesla and first seen mounted on the forthcoming M4A9 Sherman-T, has two penetration values. The lower value is used against infantry and artillery, the higher value is used against vehicles. When targeting infantry and artillery the weapon arcs to nearby targets. After a successful hit is rolled, roll a d6, and this number of additional hits is inflicted on the unit – shocking!

Jon Cave and Russ Charles have added another dimension within the pages to feast your eyes and spur on your imagination! 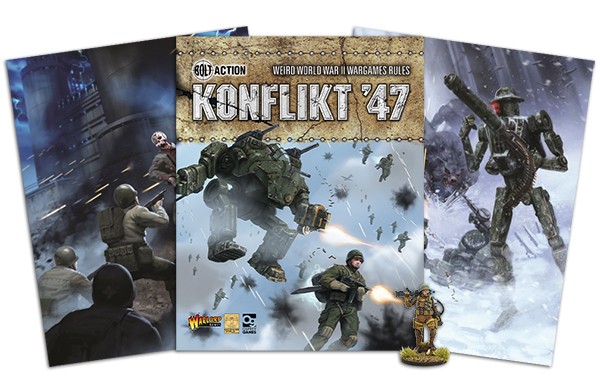 These two sets are due for release in August 2016 and contain one small size A5 soft cover KF’47 Rulebook, dice, and models for one army. Choose either the US or German Starter Set on Pre-Order Today! 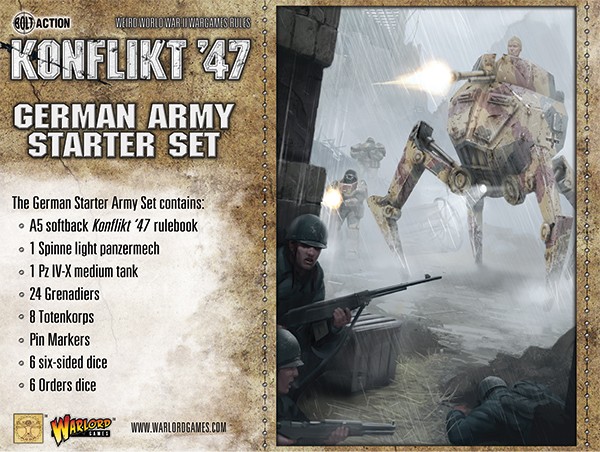 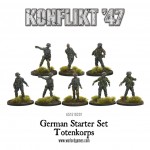 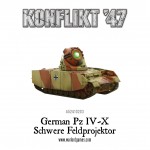 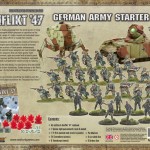 The starter sets come with a small A5 soft cover that’ll easily allow you to have the rules on hand during your battles or even to pass around your gaming group and get your mates started. 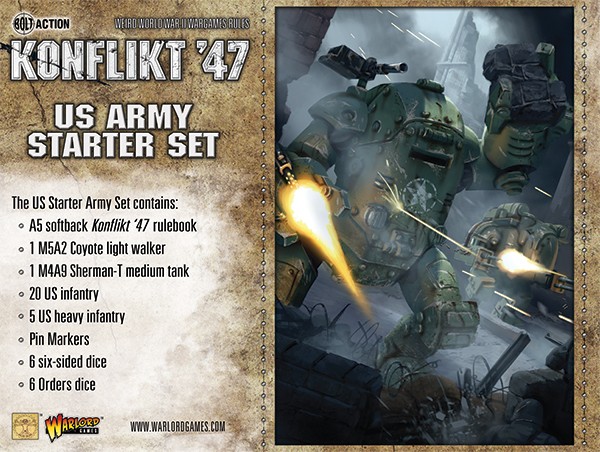 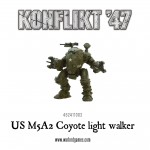 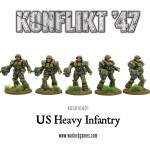 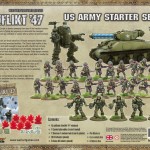