Bless your poor heartsies, it’s time to delve into the world of the Gronk! 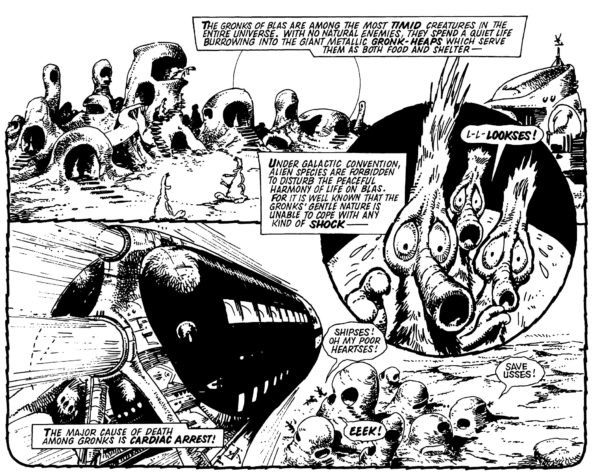 Gronks are a famously shy and timid life form from the planet Blas in the Gallego system.

Early in his career, Johnny Alpha befriended a Gronk (later named as Gloppus) on the Astro-Liner Sondheim. Gronks being prone to heart attacks, however, Gloppus soon keeled over and died at the shock of the ship being hijacked by space pirates. Wulf Sternhammer, Johnny’s partner, promptly took the Gronk’s pelt to wear.

Sometime later, on the planet Paprika, Alpha and Sternhammer came across another Gronk; this one masquerading as a female human fortune teller, Madame Desire. The Gronk recognised Wulf’s pelt, declaring that it belonged to his brother. He then insisted that he join Johnny and Wulf as their medic.

For some time, the trio worked closely together on their cases. Later, when Johnny Alpha’s evil father, Nelson Bunker Kreelman, took over the Doghouse (Strontium Dog’s HQ), the Gronk suffered several near-fatal heart attacks after discovering Kreelman’s plans to get revenge on his son. While he managed to assist Johnny and Wulf in the resolution, managing to free Alpha from his father’s torture machine, he decided not to accompany Alpha and Sternhammer and vanished amid rumours that he had died. 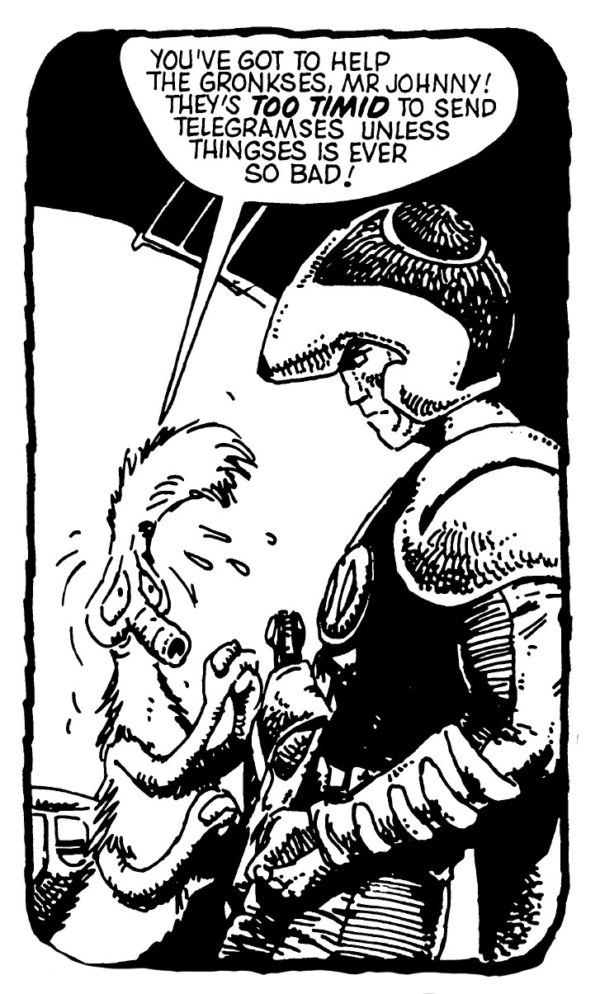 There have been many unreliable anecdotes regarding what happened to the Gronk following his separation from Alpha and Sternhammer. According to one rumour, following the destruction of the Doghouse and Johnny’s supposed death, the Gronk suffered another heart attack which resulted in a surprisingly aggressive side to his nature coming to the fore. He took up Johnny’s badge and along with the mutant Feral Jackson, travelled to the homeworld of the Lyran sorcerers to release Johnny’s soul.

The Gronk, in a powerful scene, seemingly killed his friend again in order to free him from what he thought was everlasting torment, before declaring to the Lyrans, “Nobody gets out of here alives!” and destroying them all.

But it’s best to keep in mind that this story is only a rumour and the fate of the Gronk remains unknown.

Want to dive into the weird world of 2000AD’s Strontium Dog? Grab a copy of our Strontium Dog: The Good, the Bad and the Mutie starter set. You’ll get everything you need to play the game, including a fantastic Gronk miniature to tend to your poor heartsies.

Tom spends most of his time buying books and painting miniatures. He enjoys putting animals on the bases of his miniatures and half-finishing side projects. Some say that he lives in a tower on top of some windswept northern hill with his wife and cow-patterned cat, Spaghetti.
View Profile | View all posts by Tom Mecredy
Frontline Report: Kalon’s Atlantic Wall Defenders
Pilot Profile: Russian ACE Lydia ‘Lilya’ Litvyak