In this pilot profile series, we’ll be looking at each of the aces released for Blood Red Skies, their exploits and their abilities in your games. Continuing with Russian ace Lydia ‘Lilya’ Litvyak. 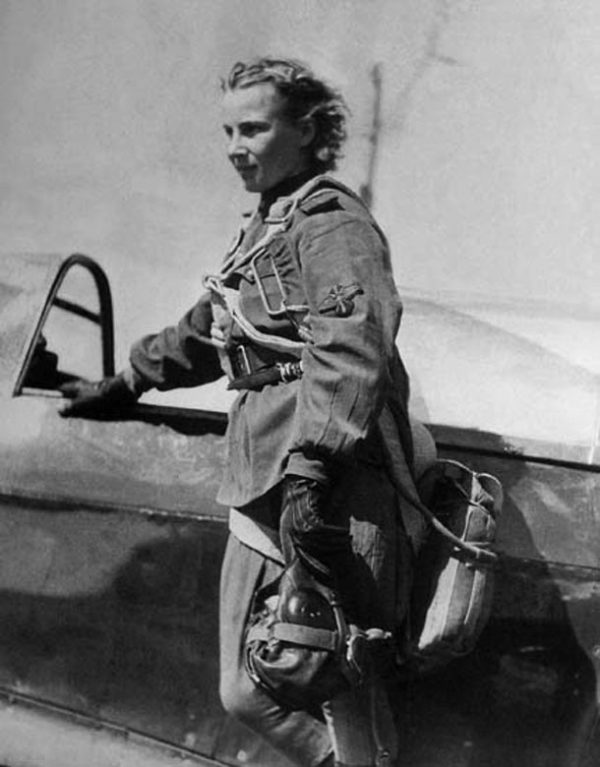 Lydia Vladimirovna Litvyak (Лидия Владимировна Литвяк, (August 18, 1921 in Moscow – August 1, 1943 in Krasnyi Luch), also known as Lilya, or the White Lily of Stalingrad was the first female fighter pilot to have earned the title of fighter ace, and is still the holder of the record for the greatest number of kills by a female fighter pilot. 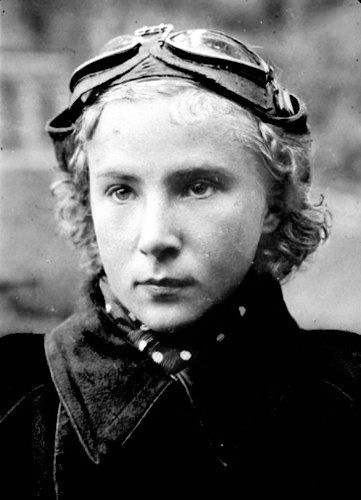 Lilya has been credited with twelve solo victories and four shared kills during her 66 combat missions. 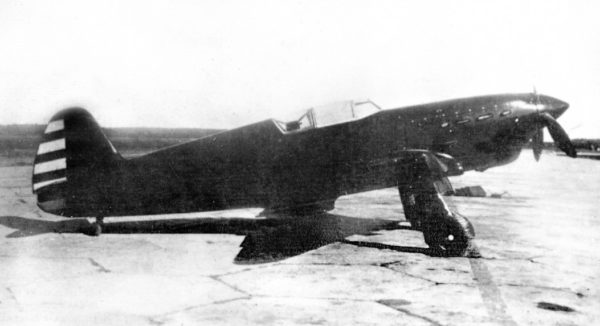 Lilya was originally stationed with 3 other women pilots (Beliaeva, Budanova and Kuznetsova) with the 437 IAP.  On the 13th September 1942 (3 days after joining her new regiment, the 437th), Lilya scored her first two kills flying a Yak-1 ‘White 02’
The 437th  at that time flew the LaGG, this meant there was a lack of facilities to service their Yak-1 aircraft so they were promptly moved to the 9th Guards Fighter Regiment (9 GvIAP).

From October 1942 till January 1943, Lilya and Budanova served, still in the Stalingrad area, with this famous unit, commanded by Lev Shestakov, Hero of Soviet Union.

When, in late January 1943, the 9 GvIAP was re-equipped with the Bell P-39 Airacobras, Lilya was moved to the 296 IAP (later the 73 GvIAP of the 8th Air Army) commanded by Nikolai Baranov so that she and Budanova could still service and fly their Yaks.

On February 23, Lydia Litvyak was awarded the Order of the Red Star, made a junior lieutenant and selected to take part in the elite air tactic called Okhotniki, or “free hunter”, where pairs of experienced pilots searched for targets on their own initiative.

On 22 March flying ‘Red 32’, she was wounded whilst flying as part of a group of six Yak fighters when they attacked a flight of Ju 88s. Lilya shot down one Ju88 but was then pounced on by Bf 109s. She managed to shoot down a Bf109 and, in severe pain and losing blood, returned to her base 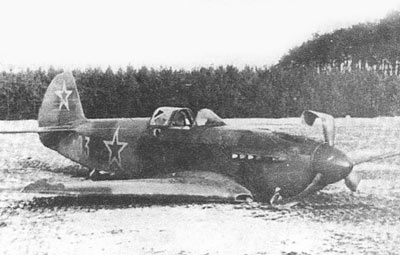 On June 13, 1943, Litvyak was appointed flight commander of the 3rd Aviation Squadron within 73rd GvIAP, at this time flying ‘Yellow 44’.

Lilya made an additional kill on July 16, a German Ju-88 bomber flying ‘White 23’. She was hit & wounded by the 109 escorts but refused to take medical leave.

A few more victories were hers through July but on August 1, 1943, Lilya was shot down near Orel on her fourth sortie of the day. Escorting a flight of Ilyushin Il-2 Shturmoviks back to base she attacked a large group of German bombers but failed to see the fighter escorts flying cover.

Two Messerschmitt 109s dived on her, aggressively she turned to meet them using clouds for cover. Lilya was last seen with her Yak-1 pouring smoke and pursued by as many as eight Bf 109s. She was 21 years old. As no parachute or explosion could be verified and suspecting that she might have been captured, the authorities could not award her the title of Hero of the Soviet Union.

In 1979, after 36 years of searching, an unidentified woman pilot who had been buried in the village of Dmitrievka was discovered. A special commission was formed to inspect the exhumed body and it concluded the remains were those of Lydia Litvyak.

On May 6, 1990, USSR President Mikhail Gorbachev posthumously awarded Lydia Litvyak Hero of the Soviet Union. Her final rank was a senior lieutenant. 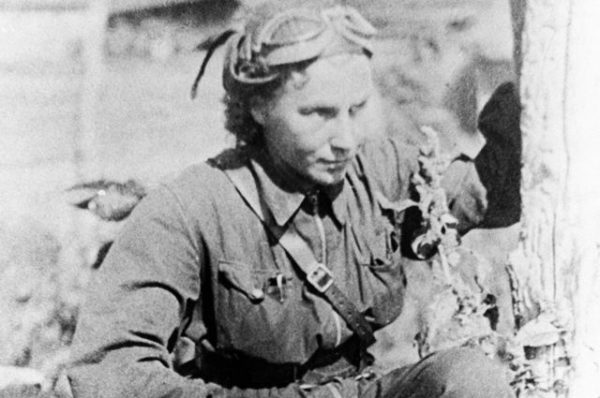 Since then rumours and controversy of her death persisted and that she was last seen living in Switzerland, married with 3 children…

Lydia Litvyak brings aggression and dexterity to Blood Red Skies. Mounted in her Yak-1 she’ll use tactics such as Reflexes, Killer Instinct, and Tight Turn to outclass your opponents! 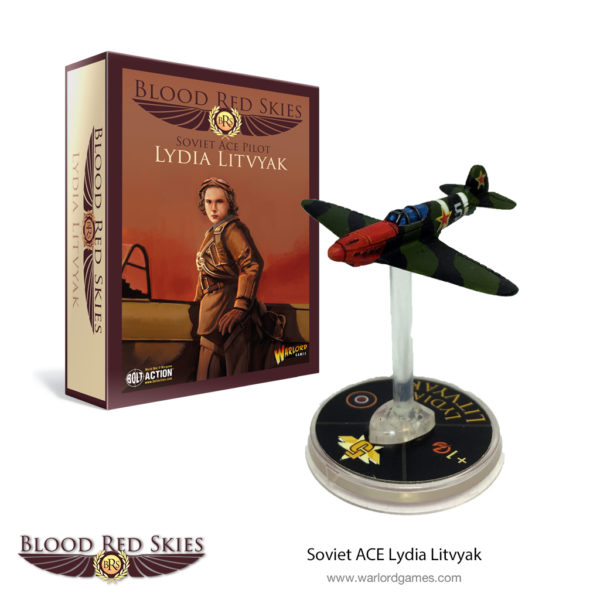 In the attack, Lydia brings her special abilities into play when getting up close to her opponents. Use Tight Turn to position easily for the kill by making a 45 degree turn at any point in her 7-inch movement. Add to this the Killer Instinct card that will allow her to gain a critical hit from just one successful dice roll (instead of two) if she is within 3″ for shooting, ouch!
In defence, Lydia takes the old adage to heart – the best form of defence is to attack! in her case Reflexes allows her, when conducting a head-on shooting attack,  to resolve her shots before your opponents

A single negative, to be aware of is the Yak-1s poor quality. consider carefully where you place your pilots as they’ll start the game disadvantaged. 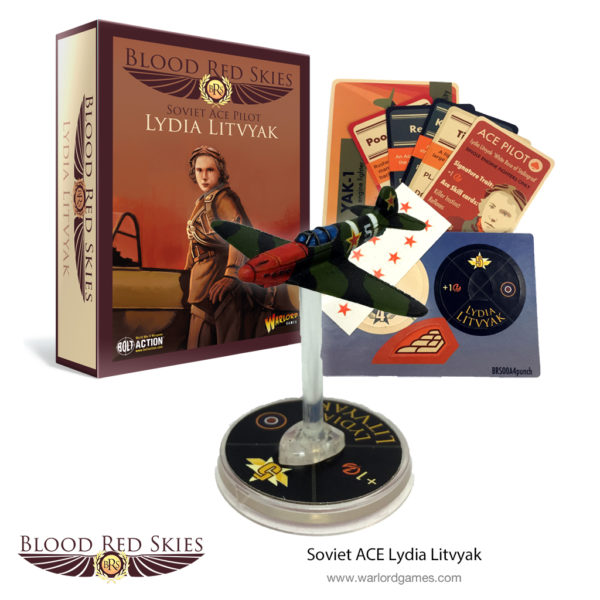 Russian ACE Lydia Litvyak comes in an ACE pack with:

The Russian Defence of the homeland force

Start your aerial campaign with the Blood Red Skies Russian Defence of the homeland force. This offer gives you the Russian ACE Lydia Litvyak, 1 squadron of 6 Yak-1 fighters (with all the counters, advantage flying bases, models and cards needed to field them) plus 10 dice! 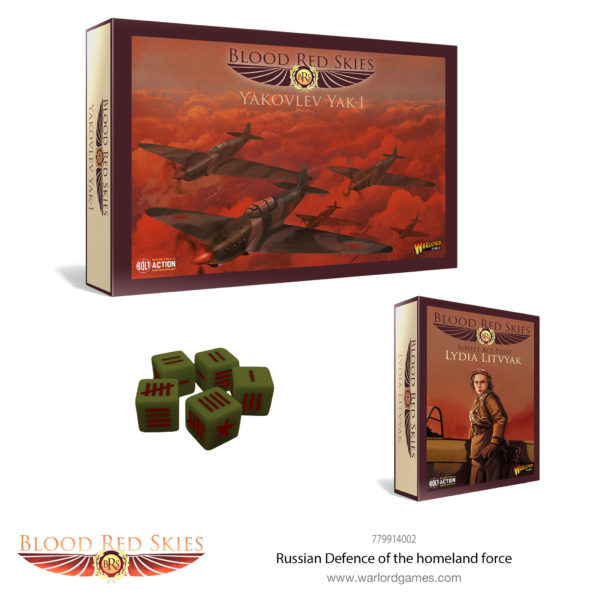