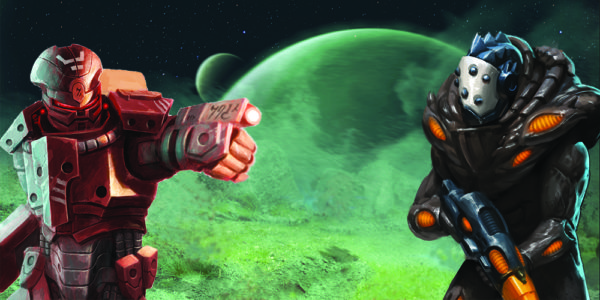 Bernard: I’ve been wanting Isorians ever since I saw the first models on Wojtek’s desk in the studio. As soon as they appeared on the release schedule I had the production moulds made and test spun (there has to be some perks to being Head of Production….lol). The first few sets went to Rick and the few extras left appeared on my desk. 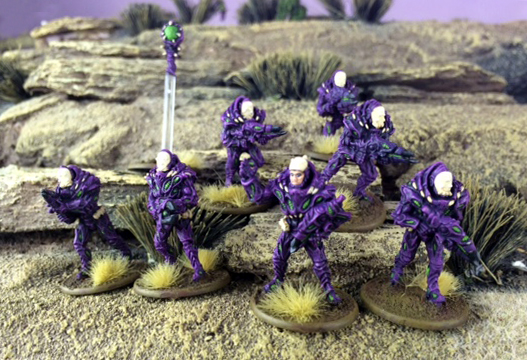 I knew I wanted squads larger than 5, so with the new box set having 7 in worked well for me. I had three squads of seven, all three squads came with spotter drones and one of the Plasma Carbines upgraded to a Plasma Lance. I wanted one squad to have a more experienced leader, so upgraded one squad to Leader 2 and also gave that unit Plasma Grenades. 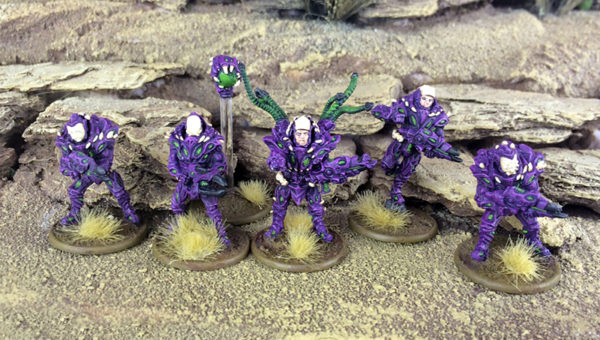 I wanted a Command Squad rather than Nuhu (those models look great, by the way), which I also added to with extra men to create a five-man team. I also upgraded the leader to Leader 3, gave the unit a Spotter Drone and Plasma Grenades. All up that come to just over 700 points spent on Tactical Choices. 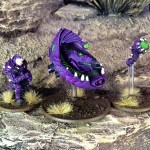 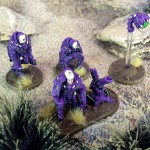 For Support Choices,I wanted a unit of two light drones with Plasma Carbines, with a Spotter Drone for the unit as well. I do like the alien look to these drones. For additional support I added in an X-launcher team and increased it to a 3-man team along with a Spotter Drone. The other Support Choice I made was one only available to Isorians which is the Phase Sniper. This is also a very cool looking model (not that we’ve seen it or cast it of yet of course ahem). The Phase Sniper I have upgraded to Leader 2, as well as adding a Camo Drone to the unit. I could have added a second Spotter Drone, but decided to stick with just the one. 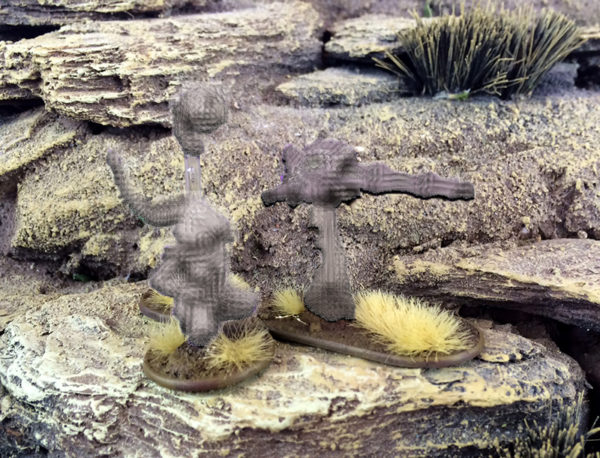 With the 12 remaining points I decided to spend within the Army Options section on ‘Block’ and ‘Well Prepared.’

My 1000 point Combat Force is complete but looking at what is coming off of Wojtek’s desk to be mastered, and what is still being sculpted, the army is in no way finished!

I don’t like playing with unpainted miniatures, and as I’m normally a slow painter and have not set up my painting desk since recently moving, I asked my friend Rob from Painted Wargames to paint the army for me.

I normally go for bright paint schemes, but liked the idea of a darker scheme for the Isorians. I went with a dark purple, with light green as the contrast colour. I liked the white face plates on the studio models, so kept that theme and added a bone colour for some of the organic parts used on the armour. With these ideas I left Rob to do his magic. They turned out spot-on and I love the final look of my army, they’ve also been based to match the 500 point scouting force of Boromite mercenaries that I have collected to serve the Isorians. 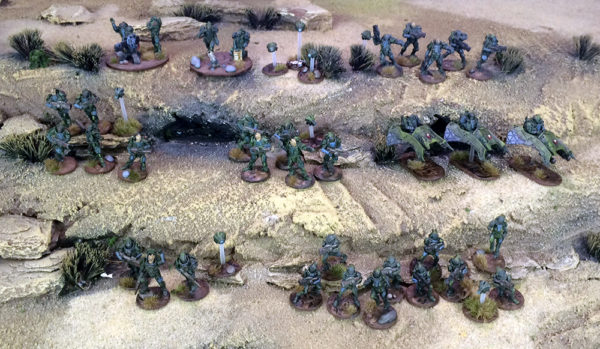 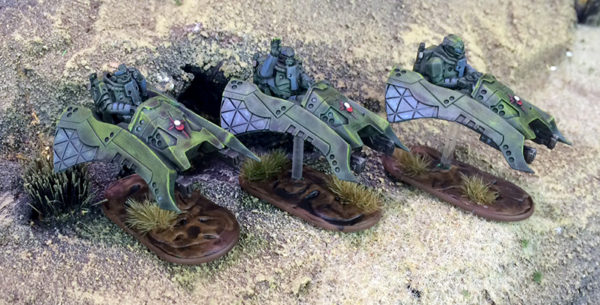 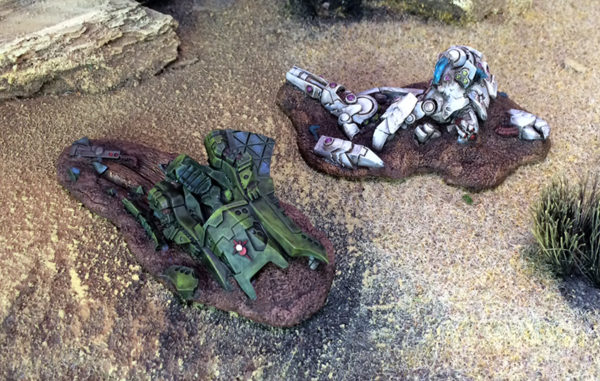 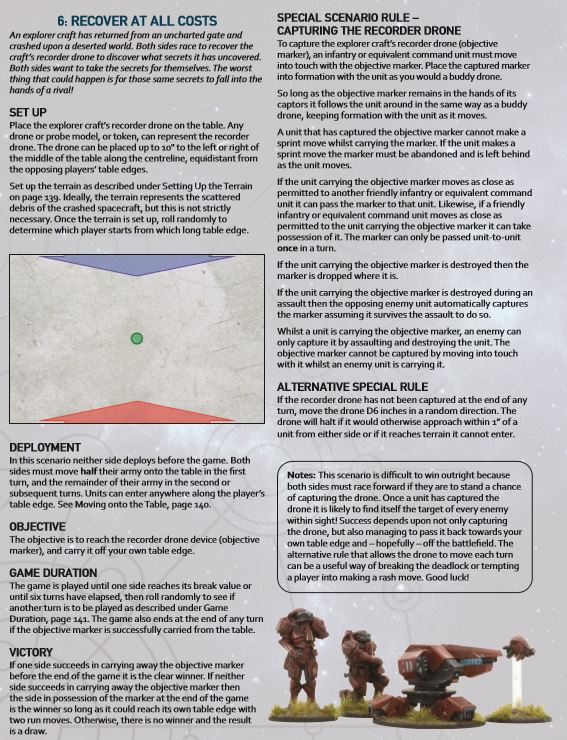 Scenario 6 works perfectly for this as both sides vie for the information and it can be quite hard to collect and escape with it. As we decided the objective would be the downed skimmer we decided not to use the extra rules for drone movement and left it as a static point at which to aim.

Charlie sent the intruders on a flanking run, succeeding in distracting Bernard into moving his Nhamak drones to intercept. 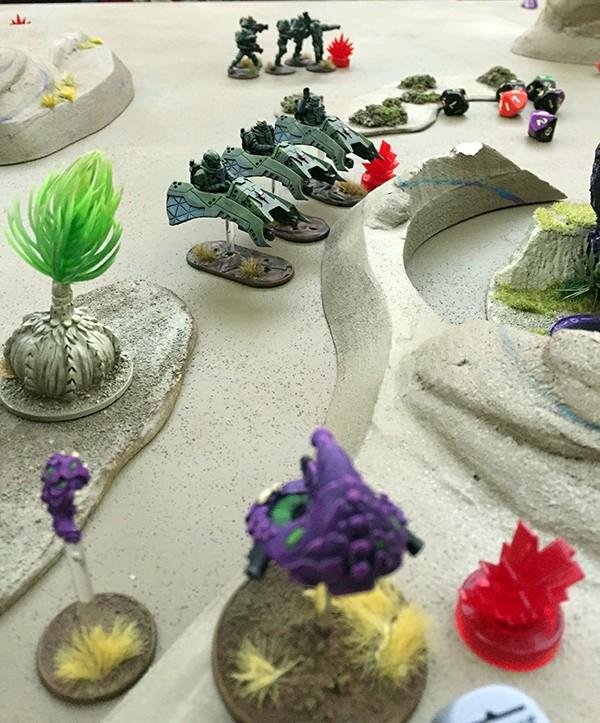 Opening Fire with the Nhamak the Interceptors decide to return fire – FireFight!

A unit that is shot at by an enemy unit with a ﬁre order at ranges of 20″ or less can react by shooting back. Charlie declared the skimmers were making a ﬁreﬁght reaction when the unit was nominated as a target. Shooting takes place simultaneously with enemy ﬁre. Both units shoot before both remove casualties and make any consequent break tests.

Charlie successfully reacts and gets a ﬁre order. Shooting for the unit in exactly the same way as you would for a normal ﬁre action, Charlie takes out one drone but their return fire is deadly – reducing the Intruders to smoldering wreckage! 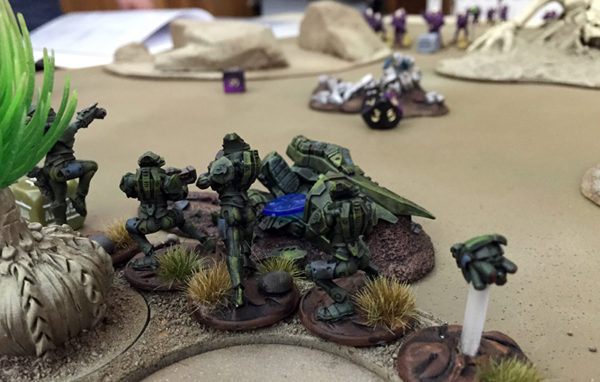 Meanwhile, without the worry of the Nhamak drones targeting them this turn, the Infiltrator squad manages to sprint into cover and start removing the data package from the crashed objective. 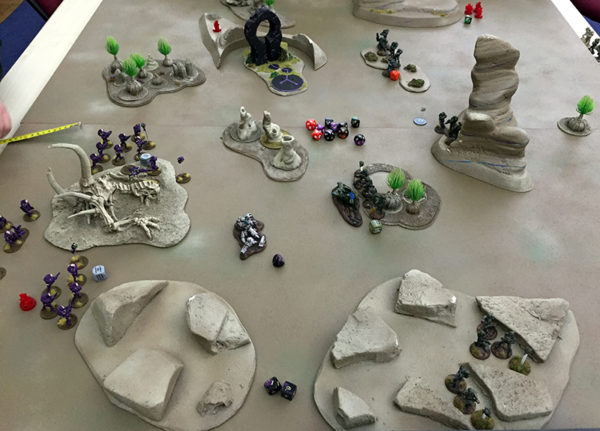 Charlie opens fire on the nearest Isorian Senatex squad and Bernard elects not to use the special rule for Isorian Phase armour when he was shot at – losing 2 men.

Bernard; I realised if I were to fail to recover from a ‘Down’ order I would not be in a position to attack next turn as the only way to reach the Algoryn with the data package would be to sprint my squad as close as I could. The way my dice rolling had been I decided to take the hits rather than risk failing my recovery roll. 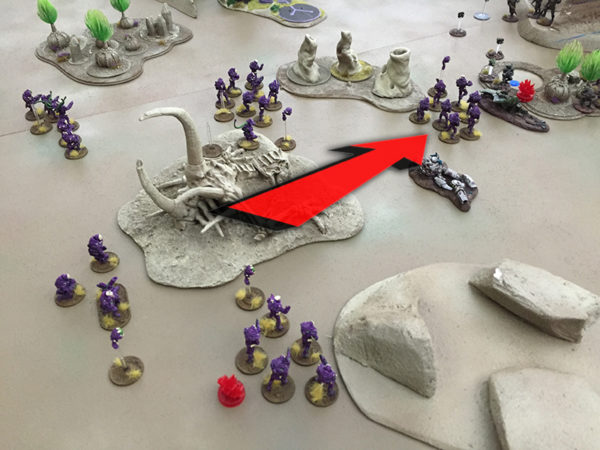 With the Infiltrators hanging in after a brutal round of shooting from the Isorian army, an Isorian Senatex squad sprints forward 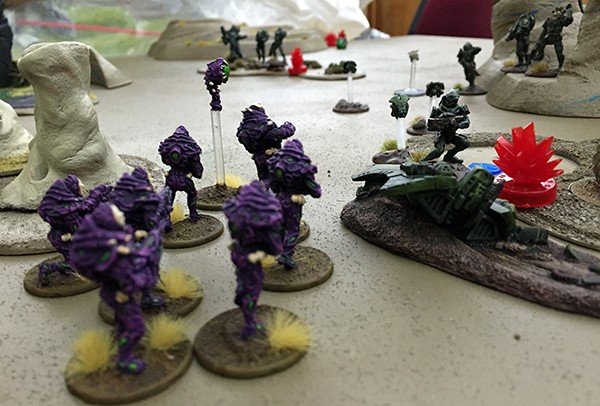 A nail biting cat-and-mouse game ensues as the Algoryn get the next dice and escape to hand over the package to the command team. 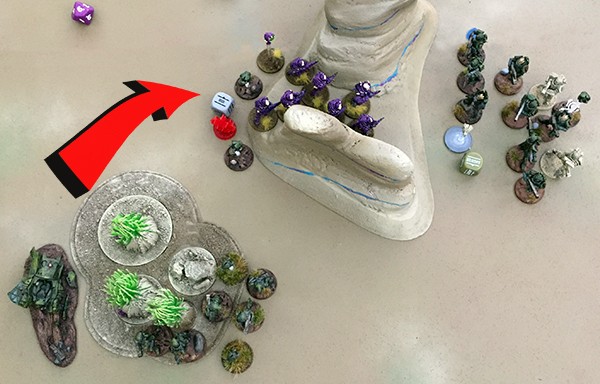 Sweeping after the fleeing cowardly Algoryn, Bernard moves up with the only squad close enough – Annihilating the remaining Algoryn Infiltrators and following up 5″ toward the retreating command. 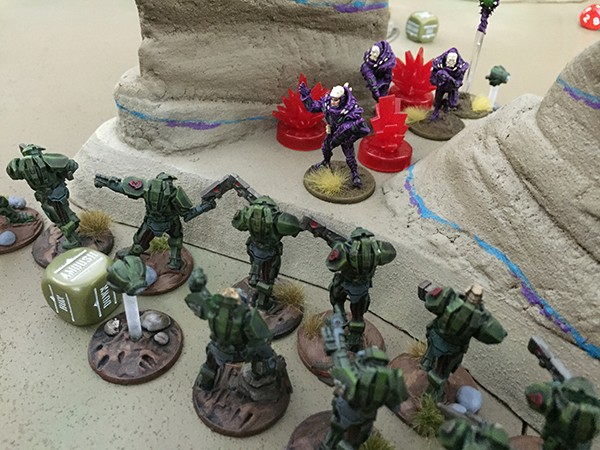 Into the teeth of the Algoryn AI squad awaiting them! As the Isorians pass their command test the turn ends, it’s all down to who picks the first order dice next turn. 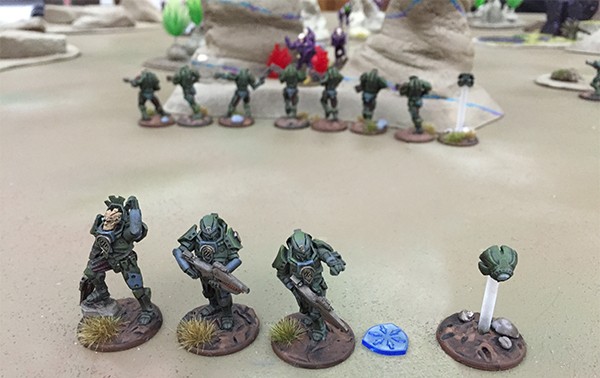 Charlie smiles in triumph as his order die is revealed and he makes the only decision he can as his command head for the table edge to victory… this time!

Bernard: As the game wrapped up I knew I’d left the Isorians back for a little too long, meaning I had to forego the special armour rules in order to make sure I could sprint the following turn without the risk of failing the test to recover from a down order. Otherwise I’m really pleased with the toughness of the Isorian army and the power in the weaponry, even if I will have to wait a while for my sniper…

Charlie: Phew, close but my infiltrators did their job, being able to advance a move before the game started really saved the game for me. That and my AI squad coming on into a great position to block the Isorians as I pulled my command back with the package! I’m going to prep some more Skimmers too as their fire power did the trick on those Nahmak drones early on… if only they’d made it through to the Isorian troops I reckon they could have done some real damage amongst the ranks. Next time we’ll find out what the data package held and bring the battle to the Isorians… and so the campaign begins!

Algoryn99 Battle Report41 Beyond the Gates of Antares594