Battle Report: Beyond the Gates of Antares Beta Playtesting

On 19th November 2014, I had the privilege of sneaking-into one of the playtesting sessions for Beyond the Gates of Antares. I joined gamescribe Rick Priestley, and his loyal playtesting companion – Nick Simmerson. 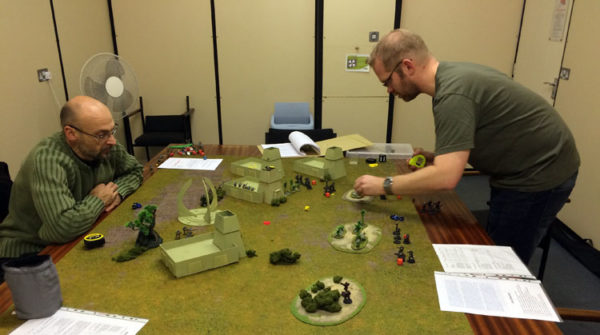 Aim of the Playtesting Session

Today, we had a brand new scenario to try-out – featuring a Transmat Station (essentially a mini-gate, akin to a teleporter) – key to the transportation of troops and cargo across Antarean space.

This was the very first time that this particular scenario had seen the tabletop – we’d play the game through, see how it felt, and discuss any ideas for necessary changes, tweaks or adjustments…

First – the Transmat Station was placed (a scenery piece with a circular footprint approximately 7 inches across) in the centre of the Boromite half of the table – so that it’s centre is (for this test) 33 inches from the Algoryn side of the table.

We then placed terrain around the board – trying to give an even spread – no clear ‘zones of death’ or killing fields.

For this game, both forces had 8 units…. 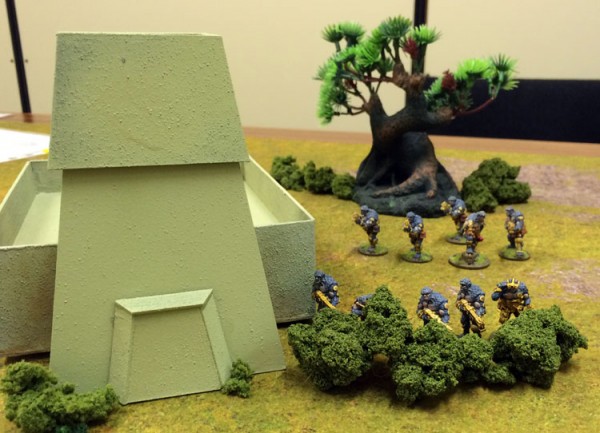 Half of the Boromite force (4 units) are deployed on the board, within 15 inches of the Transmat Station…

The Algoryn forces start off the board – however, on the 1st turn, 4 of their units come onto the battlefield.

From turn 2 onward, the Boromites may bring on up to two units per turn through the Transmat Station – they must roll a Command Check to do so.

The Algoryn win the game if – at the end of a game turn – they have a unit within 3in of the centre of the Transmat Station, and the Boromites do not.

Summary of the game’s events…

The game began with a Red Order Dice being drawn – an Algoryn activation. Nick ordered an A.I Squad to move-up on the left flank – sprinting at full pace, they headed into a bushy area in an attempt to get cover. Nick confidently rolled his Dangerous Terrain test – and failed! He then rolled a Command Check to see whether the squad was now Exhausted and – yes – indeed they were.   At first glance – the first activation of the game may perhaps seem a little anti-climactic but with half of the Boromite force on the board, readied and waiting for the Algoryn attack, Rick was salivating at the prospect of getting a few Orders Dice, and eliminating the threat early in the game… 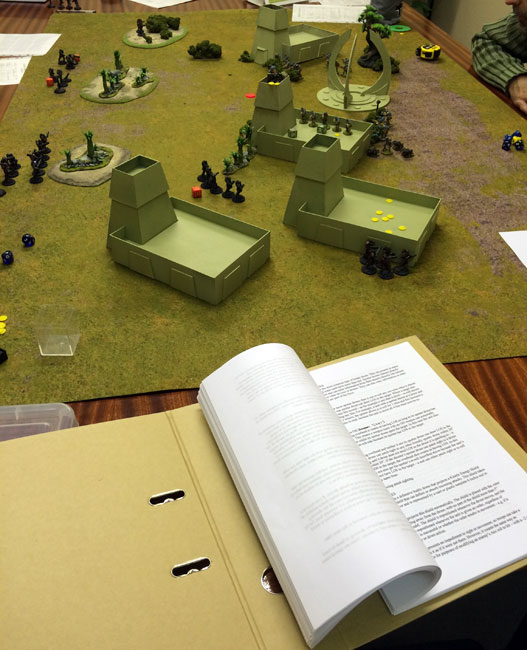 The next two Orders Dice to be pulled were green – and the Boromites opened fire. The Overseer Squad began, shortly followed by the X-launcher sat high above the battlefield inside a tower. The lone Algoryn squad were subjected to a ferocious barrage – sustaining one casualty, and receiving 3 Pin Markers.

Turn One continued with another A.I Squad appearing – this time, over on the right flank – taking cover behind a building in an attempt to flank the Boromites. A duo of Algoryn Support Weapons appeared to round-off the first turn – a Mag Light Support, and an X-Launcher laid down a barrage on the Boromite Squad taking cover behind the Antarean foliage – inflicting two casualties. 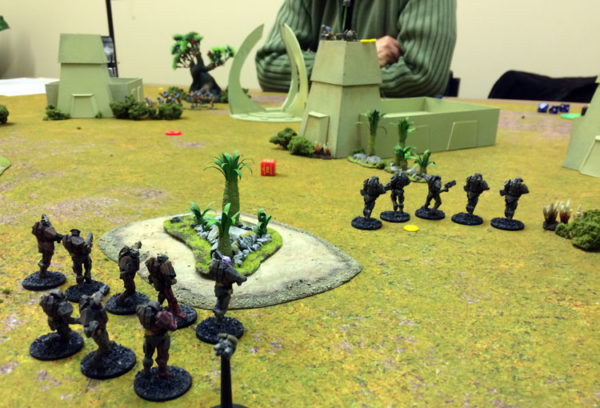 The opening of Turn 2 saw the first of Arc shot in a playtest game as the Algoryn crew loaded this special munitions into their X-Launcher! A furious scrabble of activity saw Rick and Nick delve into the brand new Beta Rules Set for confirmation of how this special ammunition worked. A template was placed, creating a zone denial – any shots fired across the area faced the risk of disappearing into the void.

Turn two continued with further fire from the Algoryn Mag Light Support, and the appearance of two further A.I Squads and an Assault Squad (armed with Mag Repeaters) on their right flank. Another Boromite squad appeared at the Transmat Station, and took some pot-shots at the ever-growing Algoryn forces, taking cover behind the bushes on their right flank.

The third turn started with a flurry of fire – the Algoryn X-launcher lobbed a Net shot at the Boromites taking cover behind the bushes – inflicting two Pin Markers, dramatically reducing their potency for the turn.

In response, the Boromite Mag Light Support in the tower prepared to fire – however, their growing collection of Pin Markers caused them to stall, and they went Down for the turn. They were however bolstered by the appearance of another Work Gang who appeared from the Transmat Station and took refuge in the building behind them.

On the Algoryn right flank, two A.I Squads and the Assault Squad advanced in a flanking manoeuvre – the leading squad however found themselves assaulted by a team of Lavamites – vicious, snarling rock-dogs – the Algoryn squad manage desperately let loose a volley of fire in an effort to weaken the assault. The Lavamites slam into the A.I squad, and once the dust and dice had settled, there was only one Lavamite left alive – a devastating combat…

The rest of the Algoryn forces focused their attentions on the X-launcher in the tower – with its commanding view across the majority of the central board area, it was a massive target priority. Between the combined fire of Micro X-launchers in the central A.I Squad, and the decimated A.I Squad taking cover on the left flank, they managed to inflict a further pair of Pin Markers, ensuring that the weapon team went Down again.

After the game, we took the chance to sit and discuss the new scenario – we agreed that the introduction of the Transmat Station and the specific deployment characteristics and victory conditions which it brought to the game gave a great focus to the game.

The main topic of discussion became the placement of the Transmat Station – was it too close to the Boromite board edge? After 3 turns of gameplay, the Algoryn squads had started to close-in, and if we’d have continued to play for another 2/3 turns they would be in contention.

If the Transmat Station were to be placed closer to the centre of the board, would it create more action, and more of a challenge to either side?

So, further playtesting is required! We’ll revisit the scenario, and try different force composition, we’ll play with the location of the Transmat Station, and we might toy around with the Algoryn deployment conditions – perhaps offering the chance to split the force in order to allow for an outflanking manoeuvre from the get-go. 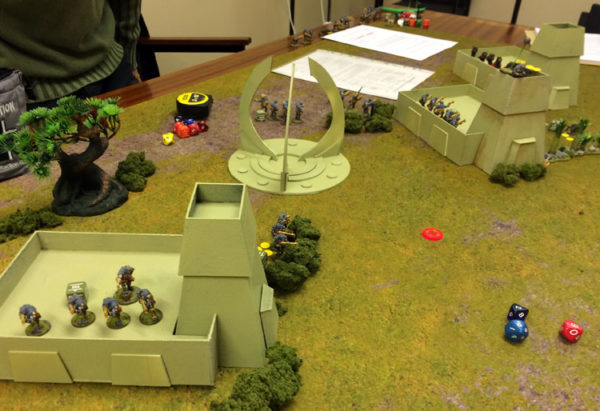 There are plenty more updates on the way, with playtesting sessions taking place each week to test new units, scenarios, equipment, and all manner of other (Top Secret!) goings-on… so stay tuned!