Rummaging around in Johns library we’ve come across some good old classic war films of the type that have inspired many a generation of future soldiers and gamers alike. We’re even going to give some copies away FREE this bank holiday! Read on to find out more; 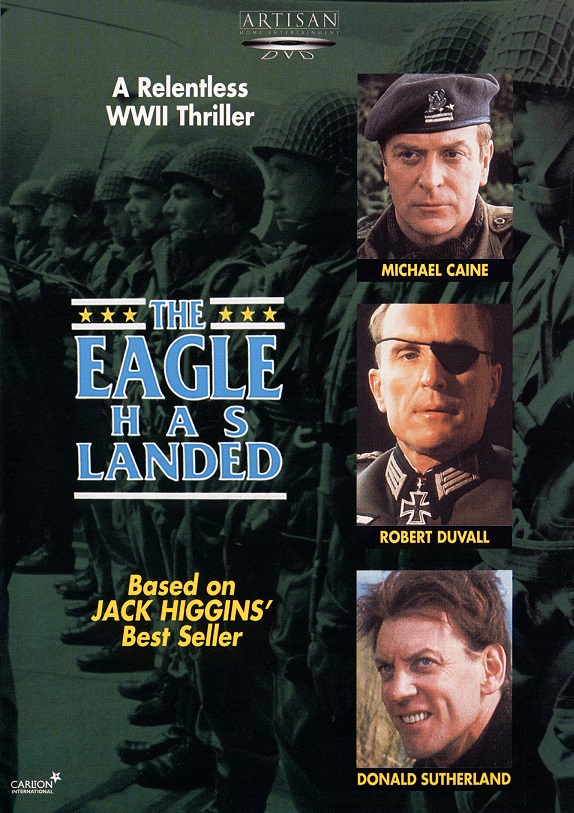 Tom Mankiewicz’s screenplay, based on the best-selling novel by Jack Higgins, The Eagle Has Landed tells the fictional story of Hitler’s attempted capture of Prime Minister Winston Churchill. Inspired by the real life rescue of Hitler’s ally Benito Mussolini by Otto Skorzeny, The Eagle Has Landed sees a German strike force headed by Colonel Kurt Steiner (Michael Caine) land in England on a covert mission to kidnap Prime Minister Winston Churchill and bring him to Berlin. What starts as a seemingly impossible assignment, becomes soon more feasible, with Steiner and his men arriving in England to face the very real possibility of success. 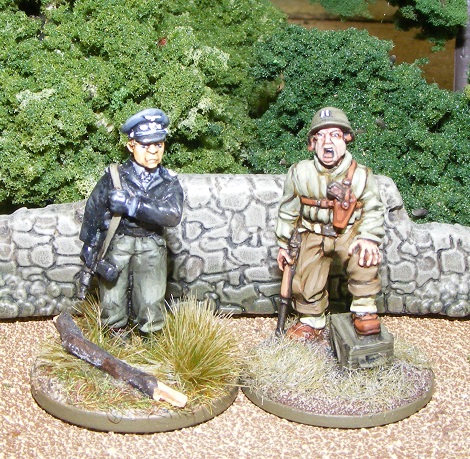 Oberst Kurt Steiner commanding the elite 12th parachute Regiment is chosen to undertake this audacious mission. Posing as Colonel Miller in command of the Free Polish Parachute Battalion he parachutes his 16 men into a small Norfolk hamlet of Studly Constable – Churchills weekend retreat!

Unknown to Steiner and just down the road at Maple House is a company of US Rangers led by the war eager Colonel Clancy Pitts.

This battle takes place immediately after the discovery of the ruse, with Colonel Pitts disregarding any tactical doctrine and racing headlong into the village. Oberst Steiner and his men, previously disguised as Polish Paras and now in Fallshirmjager uniform, must hold out in the village centre long enough for a secret passage in the church to be revealed and Steiner to escape, thus going on to attempt the capture of Churchill himself! 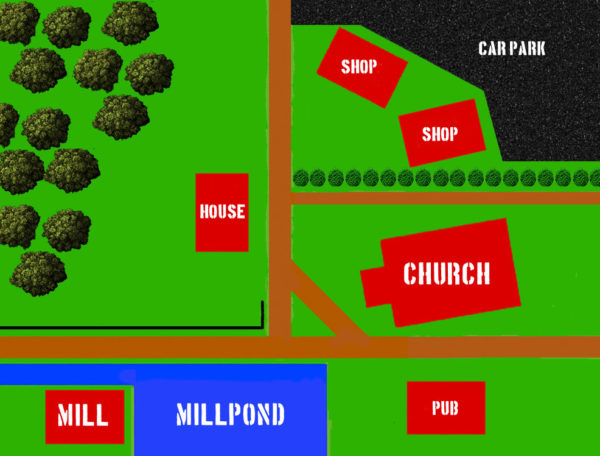 All German units are considered Hidden and in Ambush
Steiner and his batman start in the Pub, Squad A in the Church, Squad B in the House or either of the shops (Secretly make a note before the battle starts), and Squad C in the Mill.

To start the battle Colonel Pitts moves on in his jeep from the North road whilst the second jeep enters from the West road past the mill. 1st squad enters on foot through woods from the North West.

At the start of Turn 3 US reinforcements arrive – unfortunately for Steiner this Captain looks like he knows what he’s about! 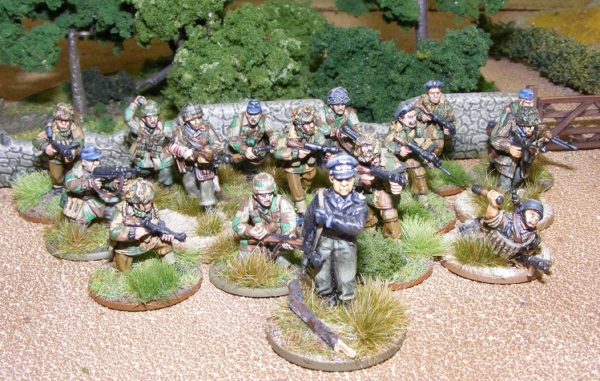 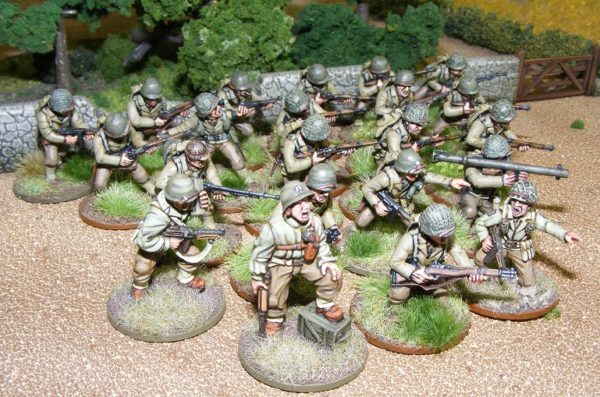 Oberst Steiner must reach the Church then defend his position for atleast 4 turns before a secret passage is opened
Captain Clark, taking charge of the situation, must overwhelm the Fallschirmjӓger in the Church before Steiner escapes!

Can the Germans hold? – at the end of turn 4 roll 1 D6, on a 4+ the secret passage has been revealed, Steiner escapes as his men fight to the last!

Should the battle continue then each time a German order dice is pulled from the bag from now on roll a D6; on a 4+ the secret passage has been revealed, Steiner escapes as his men fight to the last! Victory to the Germans.

If Steiner and his men are overwhelmed before they can escape then victory is the Rangers and they can celebrate preventing Churchill’s capture as heroes! 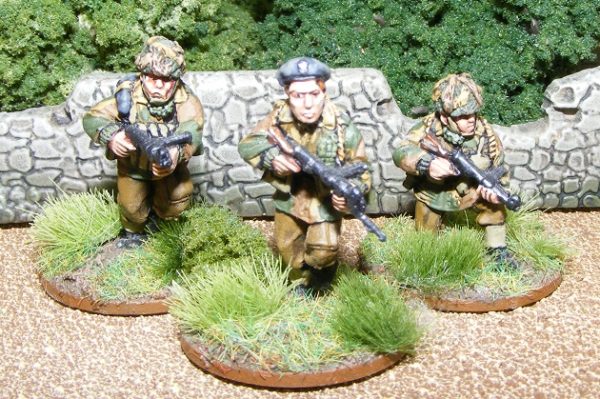 Taking inspiration from books or films is a great way to prepare for painting or gaming and can even spur you on in choosing the type of armies you may want to collect.

And as its a bank holiday weekend we’ve raided the warlord library (we’re sure John won’t notice) and gathered a few copies of this excellent classic to give away (including region 1 USA version) for FREE!

The first 5 customers who order the complete special set over this August bank holiday weekend will receive 1 FREE copy of the DVD!

Gather your troops and be sure to let us know how your battles go (include pics) over at the Warlord Games Forum, and whilst you’re there why not let us know your top 10 favorite war films – maybe your choice of a themed set could be next? 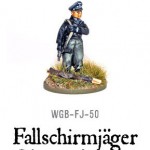 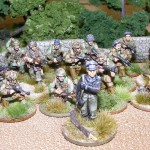 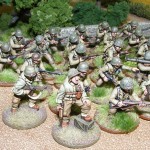 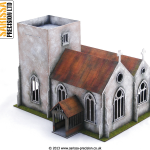 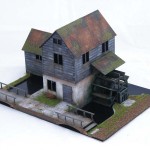 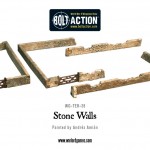 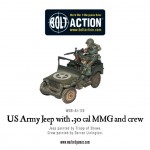 You may have already got some but not all the above sets, have no fear – you’ll be able to get them all separately in these three sets:

“The Eagle Has Landed” Infantry Set will include:

“The Eagle Has Landed”  Vehicle Set

2 US Jeeps with crew
US M3 plastic halftrack

“The Eagle Has Landed” Scenery Set

For the ultimate collector, upgrade to a fully painted and kitted out church with the awesome 4Ground complete Parish Church Collection: 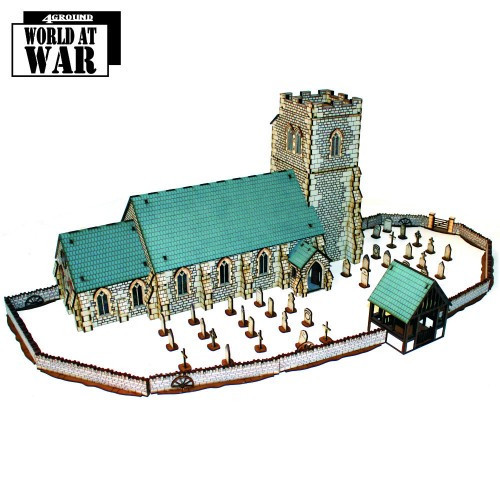