Powering in from above ahead of the launch of the Beyond the Gates of Antares boxed game (I heard a rumour that there may be a special launch edition…) are the fearsome and well armed Concord C3 Drop Squad the elite units of the Concord Combined Command! 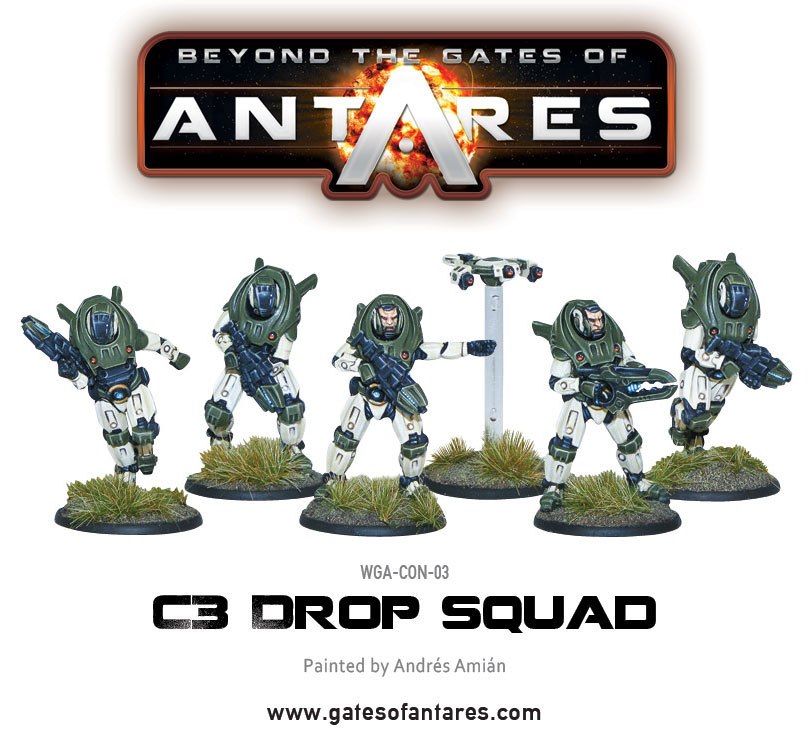 Drop troops are the most heavily armoured and armed of the Concord Combined Command’s Strike forces. Their role is to spearhead assaults onto enemy held planets, and capture and hold objectives without the support of conventional heavy equipment.

For this reason Drop Squads are heavily armed with powerful plasma weaponry including the ferocious plasma lance, capable of destroying even heavily armoured targets.

We also have a preview of the female Concord NuHu Mandarin which is due for release at the same time as the Drop Squad. 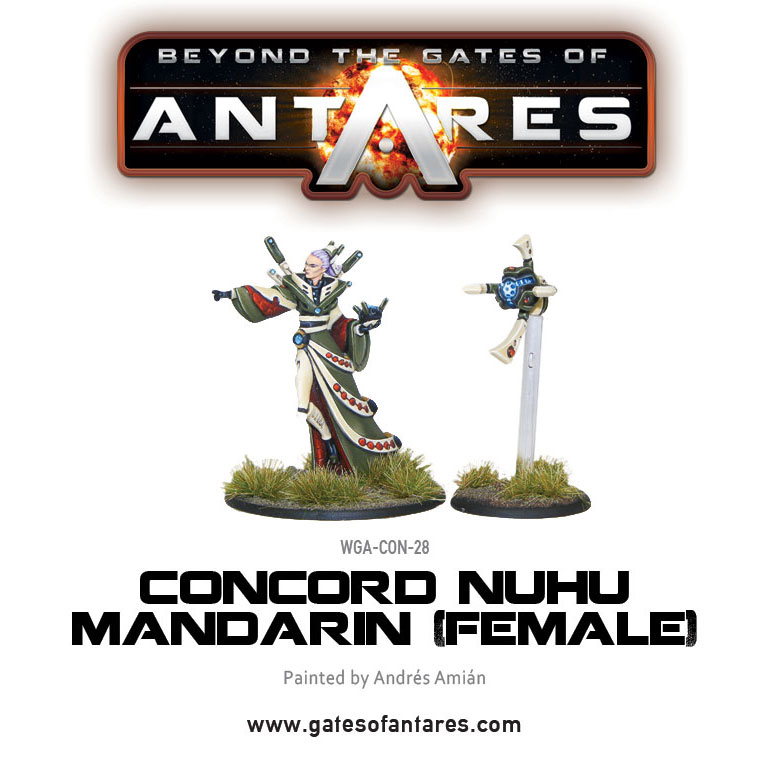 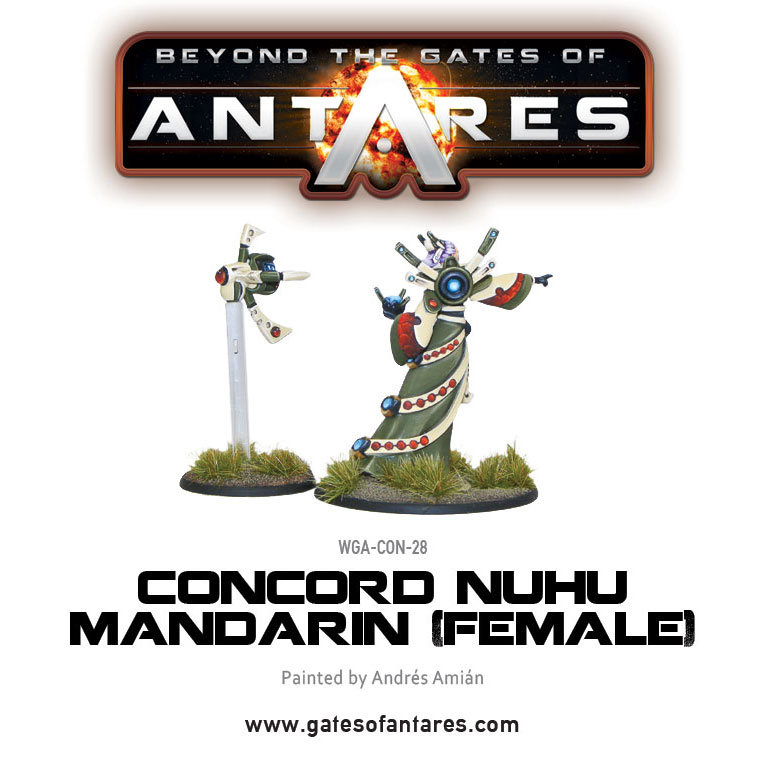 To find out more about the NuHu read on…

THE RISE OF THE NuHu

Of all the countless descendant species of Antarean space, the NuHu are unique in claiming lineage from a single human progenitor: a woman called Nayam Isoriym. Nayam Isoriym lived in ages so remote from the present that her full or true name is now unknown. Isoriym is simply a solar or planetary name such as the people of the Antarean universe commonly append to their personal names. It means Nayam of (the planet) Isori. From Nayam and her five sons, all NuHu of the Antarean universe are descended, giving rise to the five bloodlines of Osu, Kem, Laku, Misa, and Thol. Though many NuHu of the Seventh Age are of mixed blood, many others claim direct decent from one of these ancestors, and these pure bloodlines are collectively known as the Five Sons.

Whether Nayam and her sons were real or merely allegorical figures dreamed up in later ages is impossible to say, but what is certain is that the race of NuHu evolved long ago upon the world of Isori. Even so, they were never numerous, but with their superior intelligence and natural ability to interact with nano-based technology they quickly rose to prominence amongst the great minds of their native planet. In part thanks to the contribution of these NuHu, Isori was to become the most powerful and influential of all the human worlds of Antarean space, a beacon of learning, technology and enlightened government. From Isori the NuHu spread over what was then the empire of the Isorian Senatex comprising practically a third of all the known worlds of Antarean space. They also travelled freely beyond the Senatex, bringing new technologies and recovering many feral or degenerate worlds back into the fold of a greater humanity. In some places they settled or even became stranded, and so the NuHu of Isori came to live throughout human space, but everywhere they were very few amongst a great many.

THE APPEARANCE AND POWERS OF THE NUHU 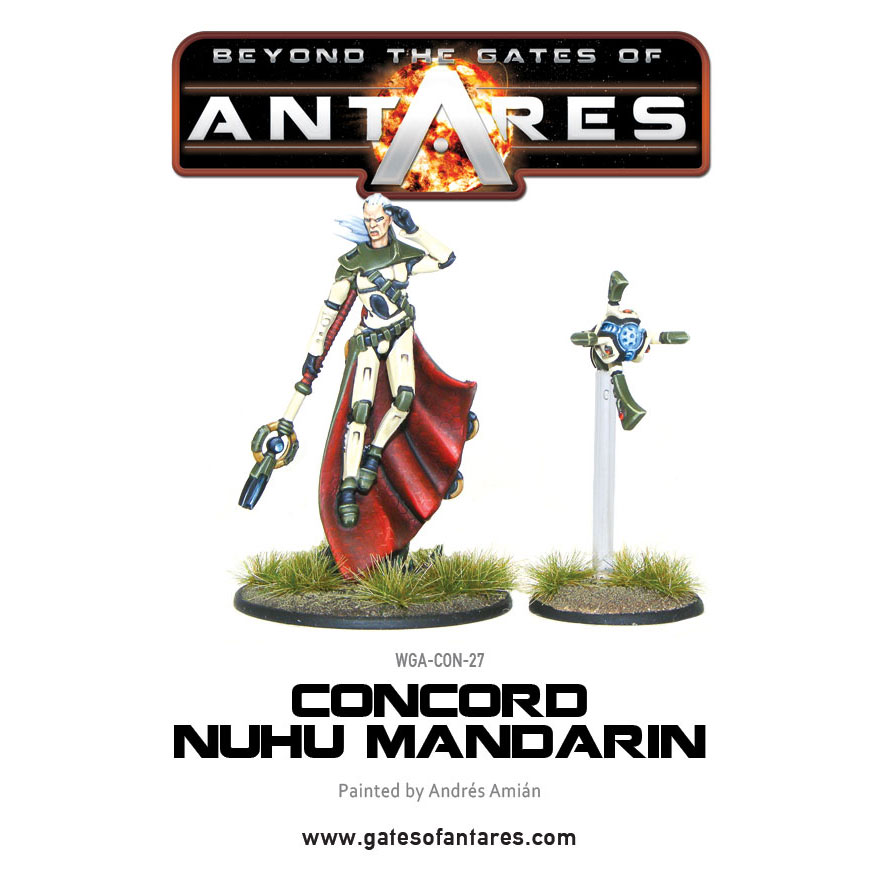 The NuHu – assumed to be a contraction of New Human – are physically unusual morphs, extremely tall, long-limbed, with bodies that are slight or even frail. However, it is their considerable mental abilities that make them distinct from other humans. NuHu are extremely intelligent, rapid thinkers who possess powers of recall that are practically infallible. This alone makes them formidable individuals, but what really sets them apart is their capacity to interact with nano-based technology. Whilst other humans must rely upon interfaces or implanted devices to interact with the many machine intelligences of advanced societies, the NuHu can do so with their minds alone. This power is seated deep within a part of the brain that is sensitive to electro-magnetic radiation and which forms a bond with the tiny nanites that saturate the worlds of human space. In this way NuHu are born and grow up immersed in an environment that is part of the nanosphere. To them it is entirely normal to live co joined lives with the IMTel (Integrated Machine Intelligence) that controls all aspects of advanced human societies. They are at the same time the masters of this technology and expressions of it, living creatures that are also part of a greater machine mind. Scarce wonder that to many ordinary humans they often appear to be living machines, cold and inhuman. 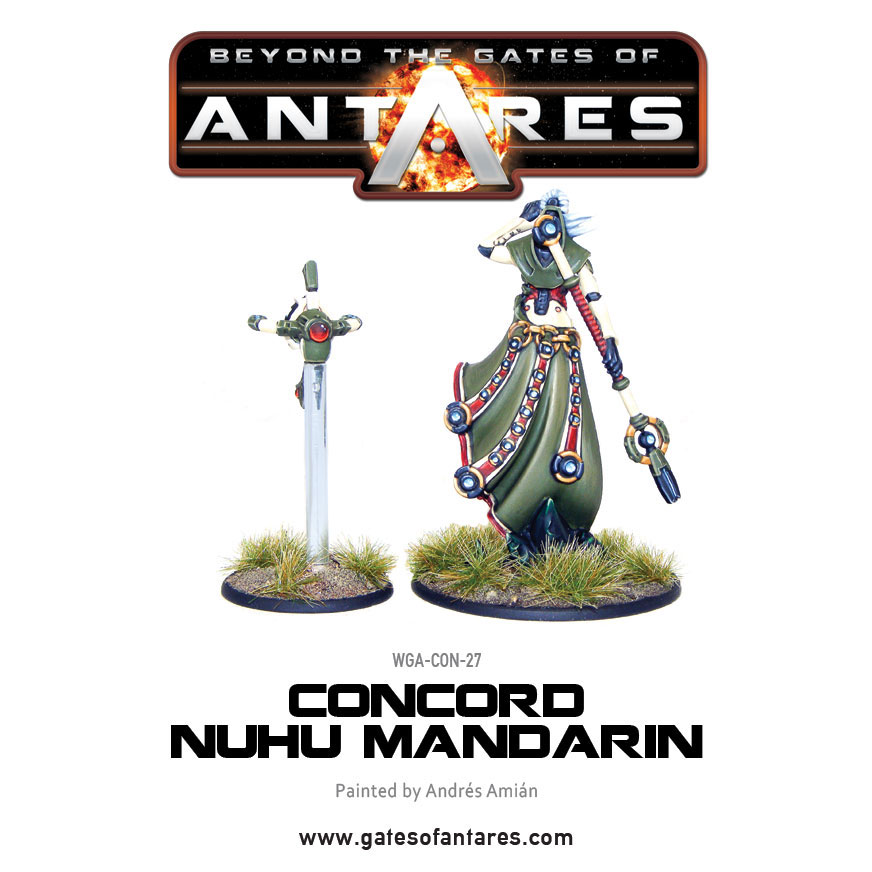 NuHu elites are often placed in charge of missions of exploration or retrieval – especially where new or alien technologies are involved. A typical force would include only a handful of NuHu amongst many troopers, sometimes even just one, but their role is a vital one and their powers considerable. Although physically weak, their ability to manipulate nanite fields endows them with powers that are both tangible and formidable. For this reason they are usually accompanied by floating nanite drones, which exude a cloud of nanites and which enable the NuHu to draw and project energy to form protective fields, powerful kinetic bolts, or manipulative forces capable of grasping, carrying or hurling great weights. Their ability to penetrate the nanite-based communications systems of their opponents is also a considerable asset. When opposing NuHu compete for control of a local shard it is a battle of minds that in most cases only one will survive – for isolation from the shard is practically a death sentence to a NuHu. This alone makes such missions deeply dangerous.

THE NUHU AND THE SEVENTH AGE

At the beginning of the Seventh Age the NuHu of Isori were instrumental in returning human space to civilisation following a period of Antarean darkness that lasted for more than ten thousand years, and which persists even to this day in some parts of the Spill. The Sixth Age ended much as had the preceding ages with a catastrophic collapse of the Antarean wormhole network. The Builders who constructed the network during the days of the nascent universe had anticipated such periodic events, and the machinery of Antares gradually set about repairing itself, re-routing wormholes and piece-by-piece rebuilding its many millions of inter-spatial connections. By the time the Isorians re-established contact with the rest of Antarean space they discovered a universe devastated by long isolation, war, disease, starvation and decline. Some worlds had retained and even furthered a high state of technology, but more had degenerated to a barbaric or feral state, and upon many worlds human life had ceased to exist altogether. The Isorian Senatexis, the great minds of the Isorian government, set about rebuilding and reconnecting human civilisation. The NuHu were instrumental in carrying the newly developed IMTel throughout Antarean space. The nano-spores of the IMTel gradually spread and populated whole planets, bringing new technologies and raising devastated planets to new heights of material culture. This refoundation created a new empire centred upon Isori and called the Panhuman Concord.

The Concord rapidly encompassed the greater part of human space, but would soon be torn in two as a result of a development of the native Isorian IMTel following the end of a long war between the Isorians and an alien race called the Tsan Kiri. This war took place over many centuries both during and after the isolation of Isori. As a result of contact with these alien bioforms the Isorian’s IMTel shard began to develop many new and altogether alien technologies. These technologies spread throughout the worlds of the newly created Concord, evolving and merging with the shards of those worlds. As the new shard spread over increasingly distant worlds, the IMTel shards of those worlds began to react against the new information. They rejected the new IMTel much as a body might reject an implant. The two forms of IMTel had become incompatible, recognising each other as foe rather than friend. As a result the NuHu found themselves part of irreconcilably opposed factions: the new alien-influenced Isorian Shard on the one hand and the Panhuman Concord on the other.

If the Concord are for you then you can get your hands on a starter army right now. 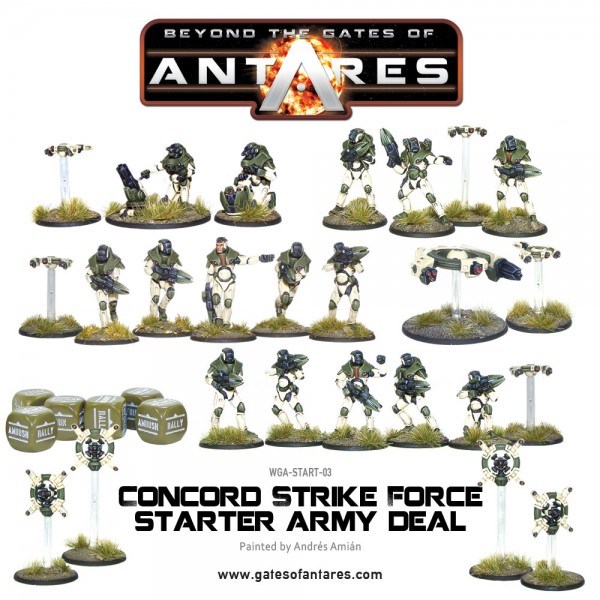 This provides you with a strong, balanced force to start exploring the Beyond the Gates of Antares rules set. Of course, there will be more to come for the Concord in the future like the Drop Troop and the NUHU so you’ll find plenty more variety to add to this core force.

View Profile | View all posts by Andy Hobday
Deal: Get the Terminator Genisys Deluxe Playmat for free!
The Eagle Has Landed