Beyond the Gates of Antares, Painting & Modelling, Stage-by-Stage Guides, terrain

The Construction of the Ruined Bio Dome of Alpha Prime

Back in April this year RichC of the Warlord Web Team spent some time working with the fantastic chaps at Sarissa Precision to come up with a set of battlefields for Beyond the Gates Of Antares display at Salute 2016. The resulting domes inspired the team from Leicester Phat Katz club and here is the awesome result: 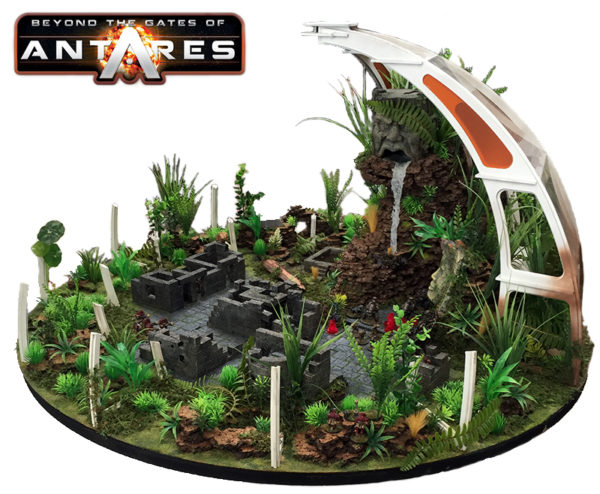 Warlord Games gave the Phat Katz demo team a unique opportunity to turn one of their bio dome structures from a pile of pre-cut MDF and Perspex pieces in to a themed board for their Sci-Fi skirmish game: Beyond the Gates of Antares. After reading the rich background material in the rule book we decided that we would create a dome that had perhaps once been the savior of an endangered or dying race but had over time met with some other calamitous event and having been deserted, nature had reclaimed the now long forgotten dome protected settlement. 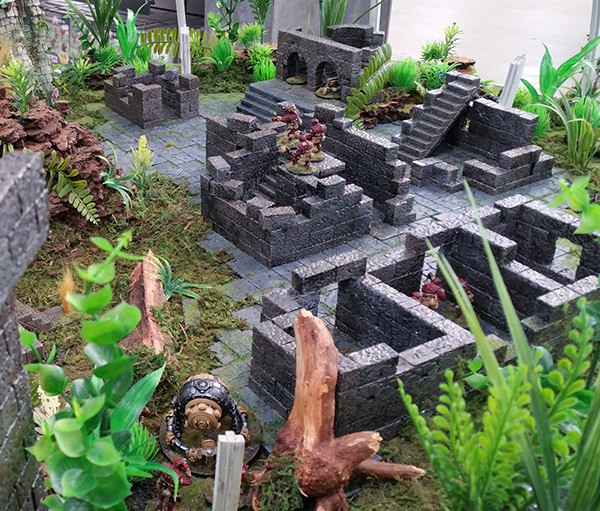 The task was to create a ruined settlement in the centre of the board which would provide a close quarter battle area for opposing forces, leaving the outer area for overgrown vegetation and unique areas for concealment and ideal sniping and ambush opportunities.

The base board was circular and 3ft in diameter with the bio dome covering a quarter of the domes total area with part stanchions around the remailing circumference. The ruined bio dome was built in three stages: 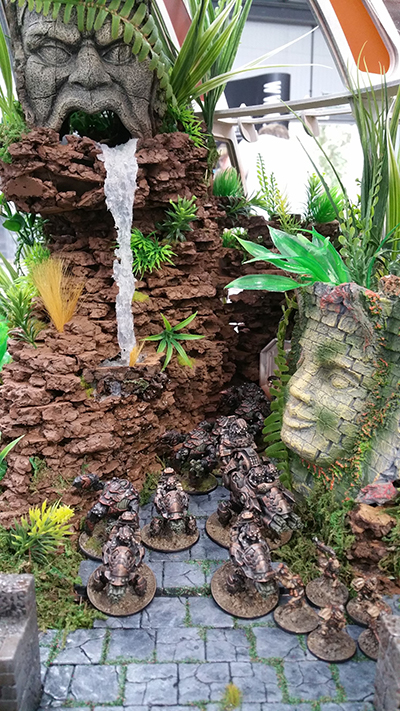 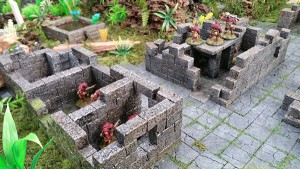 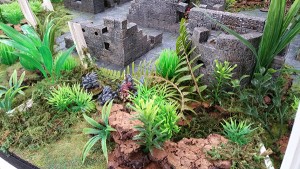 We wanted to create a set of buildings in the centre of the board that looked as though they had once formed a small settlement or perhaps ancient religious site of high importance which would tie in to the history of as to why it had been saved and placed in a protective dome. In order to fit in to the board theme the buildings needed to be basic but functional and appear as though they were of stone construction and in a state of decay and ruin. 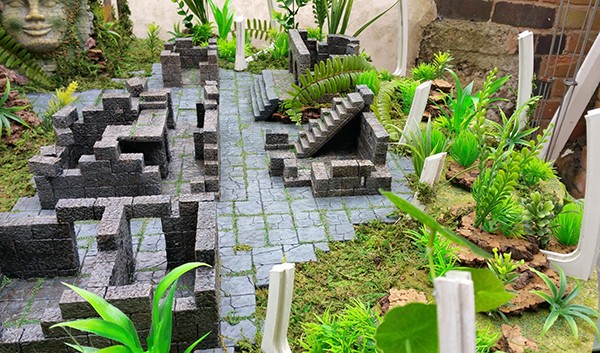 Hirst Art molds have an excellent range and vast variety of molds. In particular the molds used were from the Castle Molds range including:

These molds provided the perfect rough stone texture for our ruined buildings and paved areas. To provide a strong building block that would be ‘gamer proof’ we used Herculite 2 casting powder. 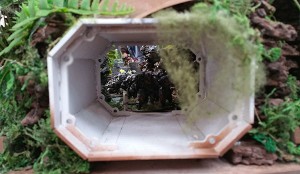 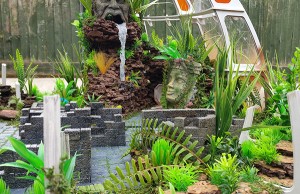 The buildings were then scratch built using various Mayan ruin pictures as a rough guide and frame of reference. We wanted to make sure that the buildings were not just eye catching terrain but terrain that could be used to house troops inside and at different levels for perfect firefight opportunities. The buildings and their ultimate layout provided not just cover but lines of fire as well depending on where the opposing factions were on the board.

Due to the weight of the board, and the Herculite-2 buildings and pavements, we needed a lightweight solution for the rocks that were incorporated in to the board. Fortunately one of our members was redecorating their parent’s house that had an abundant amount of old cork tiles which make excellent rocks when built up. We wanted the rocks to be incorporated not just around the board but in the dome area as well to give the appearance that the dome had been built in to the rocks. 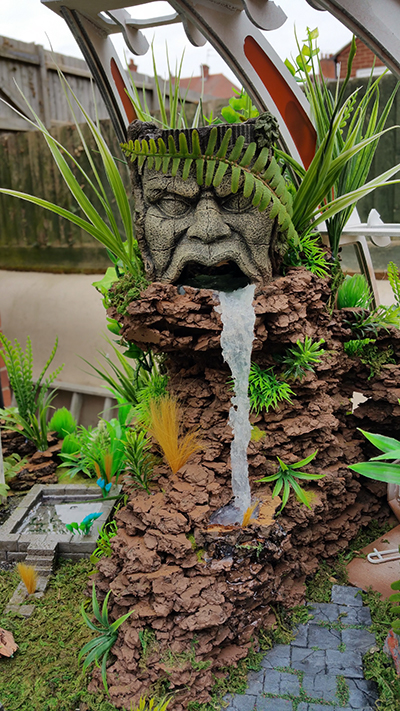 To get the height in the large dome rock formations we used the Oasis bricks / blocks, these are incredibly light, easy to cut and do not melt if they come in to contact with various glues and adhesives.

The cork was pushed in to the Oasis blocks and glued in place and gave a great rough rock-like appearance to the overall build. From the start we wanted a little waterfall from the top of the dome falling in to some form of natural rock pool near the bottom. 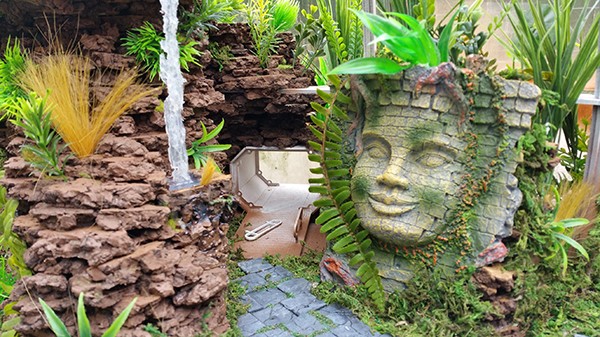 To achieve the waterfall effect we piped silicone sealer in strips on a non-stick surface and used a cocktail stick to mix it up to form a falling water effect. Then, when dry, we stuck it in place with more clear silicone sealer. The waterfall pool and water pool were filled with a clear liquid resin that did leak out onto the rocks and baseboard but overall added to the effect.

To get the overgrown jungle effect we bought various different artificial plastic aquarium plants and grasses as well as fish tank decorations.

In all approximately 12 – 15 different types including ferns, eucalyptus and pine were used. We went for different greens rather than a multi-colour effect to try and emulate a rainforest type setting. Many of the artificial plants were mounted on wire which was easily pushed in to the cork to secure it to the board, others were glued in using hot glue as this is fast drying. 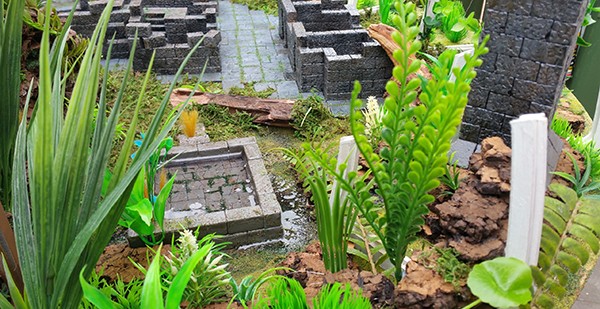 The outside of the board was painted with undiluted PVA glue and then a variety of different coloured flock and static grass was used, pretty much what we had available rather than a planned colour scheme. We had a few large bags of reindeer moss which was bought from various garden centres last Christmas. These bags are sold with the Christmas decorations and was an ideal course material that represented climbing vegetation as well as undergrowth. We wanted an over grown effect around the whole of the board as the stanchions represented the dome superstructure and the whole dome was now in ruin. 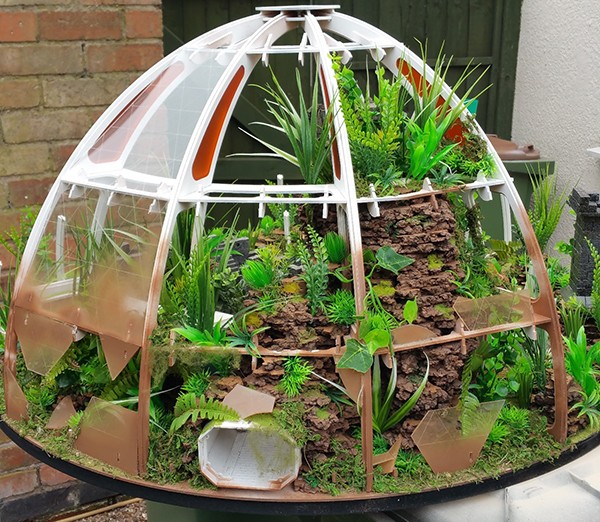 As a final touch we broke up various pieces of the Perspex dome shell to give the whole dome area a totally ruined and derelict feel.

Keep your eye’s peeled on the Warlord Games Beyond the gates of Antares facebook page for the most uptodate news and more! 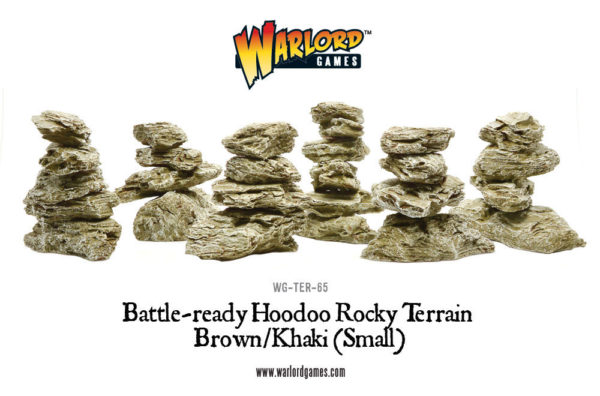 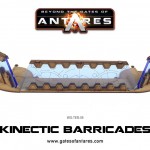 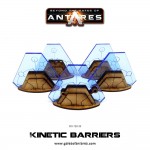 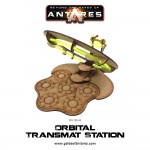 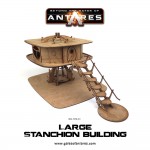 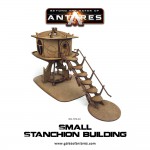 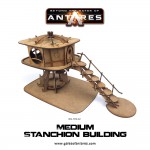 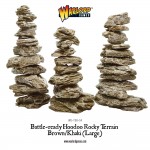 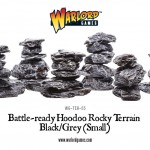 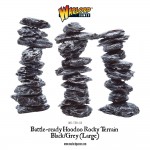 Beyond the Gates of Antares594 step by step31 terrain550