Welcome to the Bolt Action Staging Grounds! – Grab a mess-tin and take a knee. After the success of our Pacific campaign, the Warlord staff gamers are back and they’ve brought a few friends along for the ride. This time, it’s war – with a sidedish brimming with big dirty, tread-based hardcore tank action.

In the run-up to the release of Warlord Games ‘Tank War’ supplement for Bolt Action, we here at the bunker have been gearing-up (pun very much intended) to play.

Now with so many interesting aspects it’s been a delight working out the hows and whys and to that end we’ll start with a basic formation of troop commander and two tanks with the basic value being around the 600-800pts. All units start as Inexperienced, so that we can skill-up our crews after each battle, and create a little more narrative as the campaign builds.

So – without further ado – bring on the tanks!

Daz Evans – The Cromwells are coming! 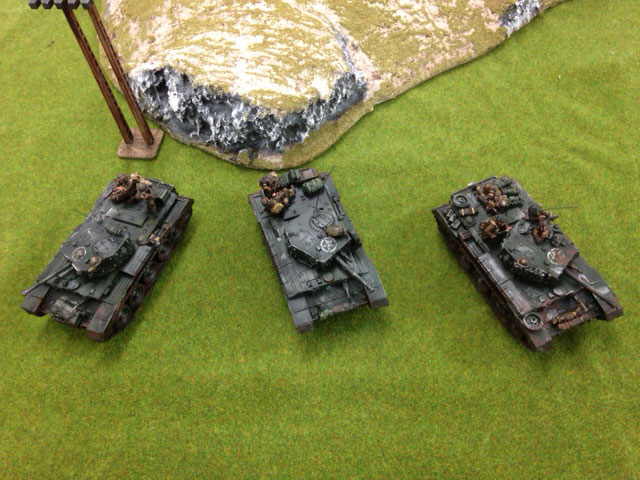 I’ve gone with the distinctive Cromwell or to be exact – Cruiser, Mk VIII, Cromwell (A27M), – its blocky structure and great speed made it ideal for armoured recce units and could hold its own in a fight with the Germans.

My starting force will be:

My Commander’s name is Lt Iain Battenberg. Over the next few weeks I’ll be growing the force to a full troop of tanks – four plus another, either a tank or tank-hunter self propelled artillery piece – then growing the troop with either towed artillery, mechanised infantry or another tank troop.

Bernard Lewis – Panzers on the prowl 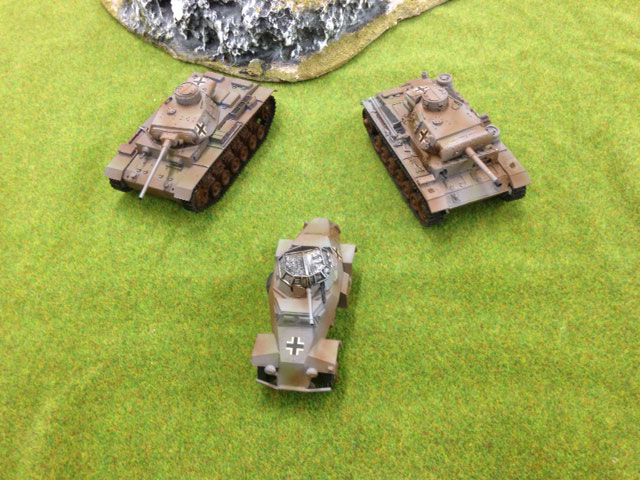 Hauptmann Fuhrmann is recovering from his injuries having survived the destruction of his Panther on the Russian front. While he is recuperating he has been ordered to train new tank crews up. He has been given an Sd.Kfz 222 armoured car as his command vehicle. His first crews have been given a mix of Panzer III Ausf J’s and Panzer IV’s variants.

After the first month of training his charges were ordered to the front where many were killed and most of his tanks destroyed. His surviving crews are now split between the remaining vehicles – his command armoured car, a Flammpanzer III and a Panzer III Ausf J. He has more crewmen than tanks and is awaiting more armour. As he is almost fully recovered he is also looking at taking command of his own tank again.

Hauptmann Furhrmann’s vehicle counts as inexperienced due to the fact of his crews level of inexperience, he would be counted as Regular with crew of the same expertise. 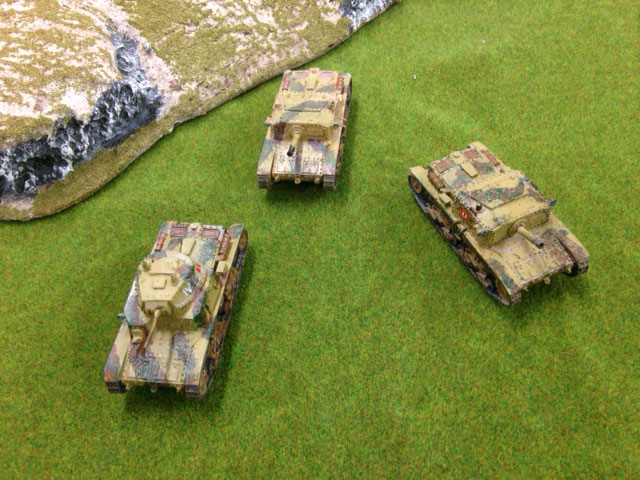 After careful consideration and the fact that everyone else went German or allied (with a token Japanese) the choice of tank went Italian. Italian tanks, underrated and out-gunned, suit early war – after 1943 not much hope would have been given to Italian tank crews. So I have gone with a troop of 3 tanks, and have briefed the men in preparation for whatever the Allies might have to throw at me!

What to choose, a rather simple choice with availability, so a vernerable M13/40 as a command tank and two Semovente 75/18 tank hunters for a total of 425 points. With the 75mm guns of the Semoventes, a wall of MMGs (4 on the M13/40 and two on each Semovente) and decent armour – Avanti we go!

After a few games, once the forces start to grow – a few surprises may be introduced, including the fabled AS42 Sahariana. 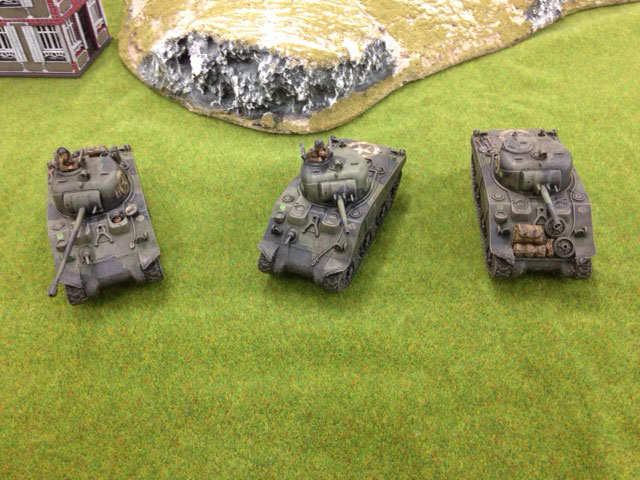 Being relatively new to Bolt Action and Warlord Games, I have been building up my infantry, but with the imminent arrival of the Tank War book I jumped at the chance of painting tanks, I bought three of the plastic Shermans and got to work!

Taking my cue from Mr Stallard I took the speed painting approach and converted one of the Shermans into a Firefly for my command tank (which gave me a chance to bung on some additional stowage!)

As my force grows I’ll be adding in a Daimler Armoured Car from my existing collection, and I plan to include some of the rather fetching plastic Cromwells too. 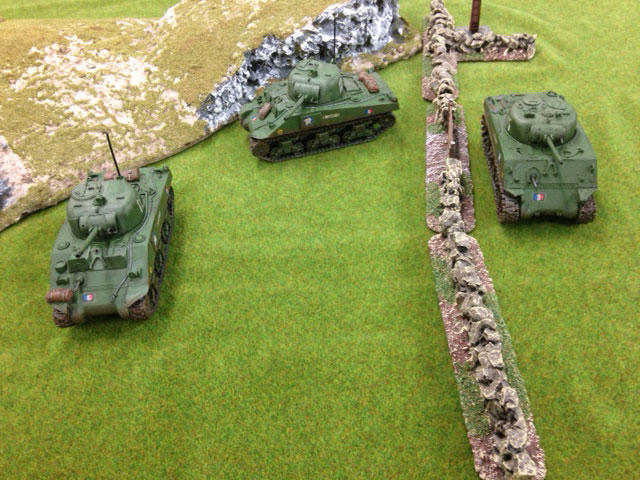 Because everyone else had gone for Germans, Soviets, British and Italian (!?!), I decided on the United States. I had previously started a US force based on the Operation Nordwind campaign, so I decided to expand upon it.

So I introduce to you, as part of the Seventh US Army, as part of General Leclerc’s 2e Division Blindee, the Shermans of the 12ème Régiment de Chasseurs d’Afrique!

They saw service mounted in their native French Somuas during the Africa campaign, before receiving a shipment of Shermans and M3A1 Stuarts under the American lend-lease campaign. My force are at the helm of Shermans, and are based later in the war, during the Normandy campaign.

My starting force will be;

The commander of the Platoon is Lieutenant Jean Baillou, and as the campaign progresses over the coming weeks, I plan to add a Stuart Light Tank, an M10 Tank Destroyer and a “Pathfinder” squad to the platoon. 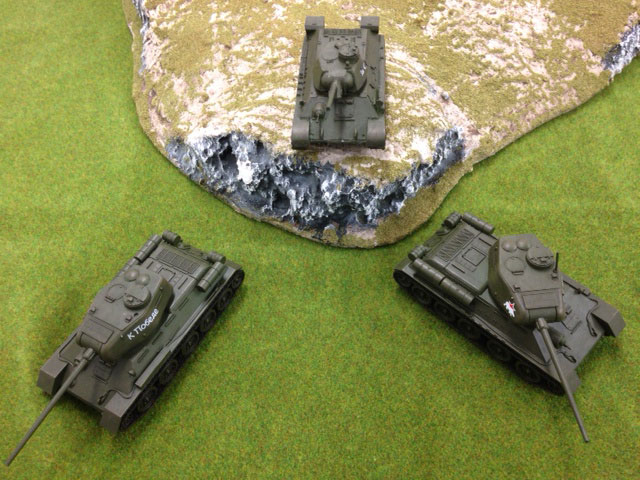 In previous wargames I had always been drawn to the horde armies, and with Bolt Action I resolved to not fall into the same mould. But the Soviets had always appealed to me. Their relentless defence matched only by the sheer bloody-mindedness in attack. So with this in mind I chose them as my Tank War force. No excuse on the model count there!

It was during the summer of 1941 that the Germans attacked into Russia, trying to replicate the earlier success of the Blitzkrieg campaigns. Nikolai Kylenigov was a tank commander in Krivoshein’s 25th Mechanized Corps, a unit that was constantly being pushed back to the front to stop the German advance.

Crew after crew were being thrust into new vehicles without as much as a few weeks basic training. Nikolai was at the head of one such squadron. He was given a T-34/76 and told he would be leading two of the newer up gunned 85mm T-34/85’s to secure a bridge head. He should meet with little resistance, but if he did engage he was not to retreat at any cost.

Rich Dando – Secure the hatches – the Wolfsrudel are taking aim. 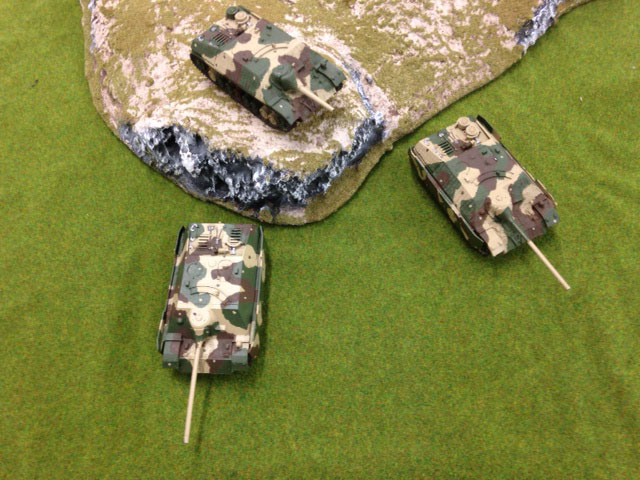 Having been pried-away from my beloved US Marine force for a spot of something away from the shores of the Pacific, I delved back into the warehouse in search of something a little different – knowing that my opponents were to be fielding the likes of the Sherman, Panther, T34 etc – I wanted to try something a little less known – and landed upon the Jagdpanzer, with my sights set firmly on knocking-out some Soviet armour.

When the Germans looked at the hugely successful Panzer IV chassis, and thought ‘Hmm – it’s good but… how do we fit a much bigger gun?’ – the Jagdpanzer was born. Whereas the Panzer IV Ausf H mounts a 7.5 cm (2.95 in) KwK 40 L/48 main gun – by doing away with the traversable turret and mounting the gun straight onto the chassis, the Jagdpanzer IV could be armed with the ferocious 7.5 cm Pak 42 L/70 – the gun which was usually taken into action as the main armament for the Panther!

By doing-away with the turret, the Jagdpanzer has a much lower silhouette than the Panzer IV, and the Germans also took the opportunity to thicken-up the sloped frontal armour. The Jagdpanzer therefore mounts a bigger gun, and has thicker armour than the regular Panzer IV – however, the lack of a traversible turret means that the whole tank has to pivot when tracking targets.

I’m working towards a Volkssturm themed army to mount the Defence of Berlin – as the Allied forces closed-in on the city, there are tales of the uncovering of a number of Top Secret German research facilities. Recently, I’ve been hacking away at miniatures in a series of savage acts of conversion – with a variety of levels of success. I’ve got some interesting plans for my tankers… taking inspiration from some of the tall tales – the Germans dabbling in the occult, Die Glocke, Foo Fighters and such… but more on that later.

So – prepare yourselves for the armoured assault – ‘Tank War’ is upon us! 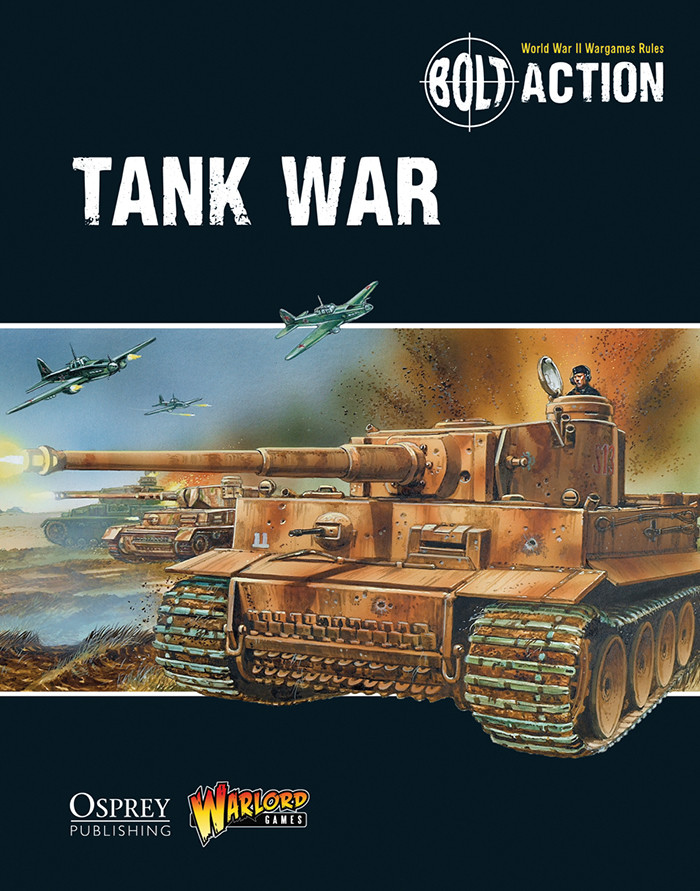