As promised, here is the first instalment of our Pacific campaign collecting series. The idea is that four of us here at Warlord HQ (Ches, Daz, Bill and Rich), who have never played this theatre before, take you through step by step and show you not only what they collected by why. Hopefully this bite size way of putting a force together will show you just how simple it can be to start a new army. 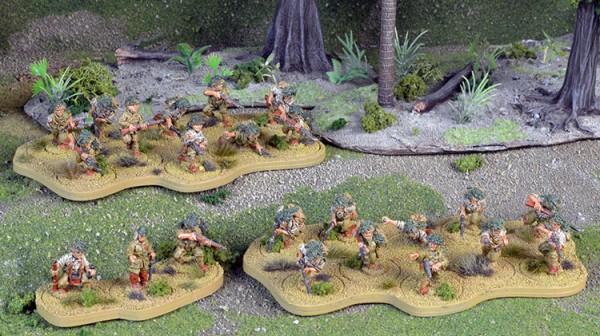 Japanese armies throughout history have always intrigued me. WWII being no exception to this, I jumped at the chance to create a force for our Pacific campaign for Bolt Action. The Japanese soldier at this time was a formidable warrior. Not only did they except dying as a consequence of being a soldier, they embraced the notion of dying for their country, and Emperor. The idea of surrender was alien to them and generations of proud teachings told them it was a massive dishonour to be taken alive. Surely a force with this much will to fight would never be beaten?

I wanted to pick a historical structure to follow. The Japanese Island Warfare battalion allowed me to pick from a fairly narrow band of options but still give me enough flexibility to create an all round Bolt Action army.
The main type “A” battalion had just over 1000 men in them when at full strength. Usually three of these would attack or just take small islands in key positions throughout the Pacific region. They were then left to defend the island for as long as was needed, sometimes reaching starvation point because of the lack of supplies. Not something I would let happen to my force…

I decided to use the great looking Jungle Fighter figures (called veterans on the web store) to represent my forces. They are covered with some cool foliage and would look perfect holing up in various positions laying ambush for those USMC who were brave enough to attack my island.

10 Regular infantry including NCO with SMG 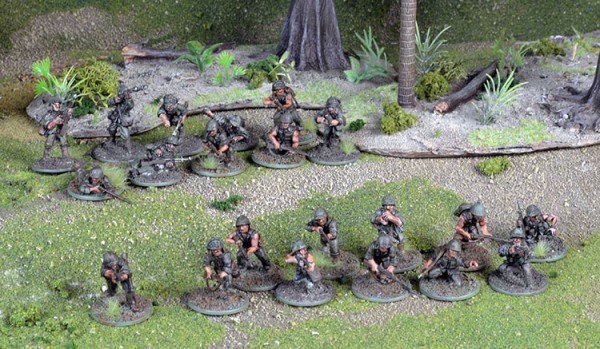 In World War II the US Marine Corps played a central role in taking the fight to the Japanese in the wake of Pearl Harbour. The marines, both past and modern day, have to be my favourite military unit of all time. I decided to start collecting marines in this Pacific war campaign mainly for this reason but also to learn more about the theatre. I have started my collection with two squads of ten marines and a lieutenant called Lt. Miller. The colour scheme is based on the Iwo Jima list section of the US army book.

I found a lot of inspiration for my marines in many war movies like The Thin Red Line, Flags of Our Fathers and the series: The Pacific. The good thing about historical wargaming is there is material everywhere to read.

Here is my starting force:

Infantry: US marine squad 1 NCO with SMG and 9 men (regular)

US marine squad 1 NCO with SMG and 9 men (regular) 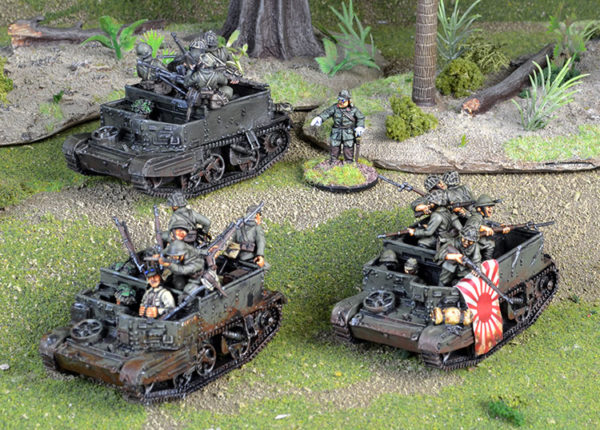 Banzai! The words of loyal imperial infantry of the Japanese Army during the Pacific campaign. That opening gambit may give you a clue to the force I’ll be collecting and deploying during this campaign.

Why Japanese I hear you ask? Well, for me it was the figures, specifically the plastics, and I had one of my rare ideas. The one thing we don’t normally cover in Bolt Action is captured vehicles, mainly because most armies have more than enough tanks of their own.

Each team member has been given a force allowance graduating from 250pts up to 1000pts, so first up was my belt and braces core units.

The vision I had for the force was a mobile, fast hitting group, ideal for island hopping and taking tactical objectives; whether they’ll hold them we wait to see!

For my commander I’ve gone for a 2nd Lieutenant at 50 points.

Next, a ten man squad of infantry with an LMG mounted on bikes, and this is where my captured vehicles idea comes in: My troops are fresh from victory at the battle of Singapore (8-15 Feb 1942) have nicked off with a couple of damaged but serviceable Universal Carriers. I had the idea for this conversion as soon as I saw the Japanese book many months back, so having agreed a “count as” rule with the other players, the bikes have become something more substantial. Initially I thought this would be great way to cut corners on painting legs! Then I read the rules and realised I needed to have them on foot as well. This unit brings the points value to 130pts.

The final element keeping the theme is a five man grenadier squad with a knee mortar in another carrier! At 80pts, it brings the final total to 260pts.

Infantry: 10 Regular infantry including an LMG. All mounted on bikes. 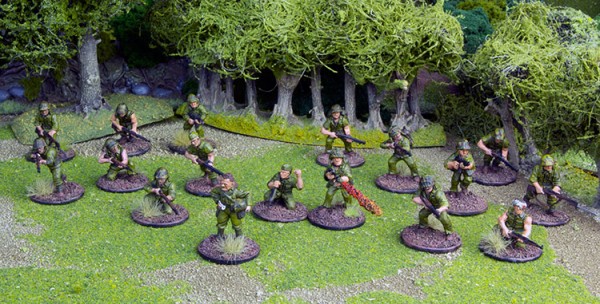 I chose to collect the US Marine Corps because during my time spent picking and packing customer orders in the warehouse, you see a lot of armoured vehicles… and, more often than not, we spend our time discussing tanks (and our insatiable appetite for more and more of them!).

Though we manufacture hundreds of armoured vehicles, there is nothing else in our range quite like the Buffalo Amtrac – in both design and purpose. On first sight of the kit, I had flashbacks from Stephen Spielberg and Tom Hanks’ ‘The Pacific’ – a fleet of hundreds of Amtracks coming ashore under artillery fire…

That was it – I was hooked – I knew I had to have one, and that night I ended-up taking one home. As the weeks went by my collection quickly grew, and before I knew it I had a fairly formidable amtrack fleet of my own… but more about that in the coming weeks.

Whenever I collect an army, there’s a theme and a story behind the models – I’ll see a miniature, and it’ll spark my imagination to get writing an elaborate history of how they came to find themselves on the table… my army lists grow from there. They might not always be entirely competitive forces, but I get more reward from the project coming together both on my painting desk and across a myriad notepads and text files, as I scribble ideas down as they come to me…

For this force, the idea was simple – taking inspiration from those scenes in ‘The Pacific’ TV series, and from the Buffalo, I wanted the army to be entirely mounted in Landing Craft. They would be a beach landing force – coming ashore in their Amtracks to tackle the Japanese beachhead positions.

250 points doesn’t buy you a whole lot of toys, bells and whistles – with the points level being so tight, I knew I’d have to keep things basic – however I was determined to include one of the iconic pieces of equipment used in the Pacific.

I started with a Regular 2nd Lieutenant to lead the men, and took two standard units of Marines. My army is going to use the ‘Iwo Jima’ Theatre list – so I’ve taken Late War Marine Squads. I then threw-in a Flamethrower team for good measure – so that when we come ashore, we’ve got a surprise in-store for the Japanese defenders!

Be sure to tune in next time as we take our forces to a nice round 500 points. As we are planning a 4 player game with these armies you can be sure that there will be plenty of secret list writing and second guessing when it comes to adding the extras!

And of course let us know about your New Year’s projects too. Pop over to our Facebook page and show off any new armies, figures or modelling you have been working on.