We spotted this recreation of the Battle of Brécourt Manor on Facebook. Ed Rossman guides us through the game pitting 14 US paratroopers against 47 Germans.

1st Lieutenant Dick Winters of Easy Company, 506th Regiment, 101st Airborne, was given the unenviable task of neutralising a hidden battery of 105mm guns located near a French farm called Brécourt Manor. Pre-D-Day intelligence had failed to locate these weapons. The battery posed a direct and hitherto unforeseen obstacle to the landings at Utah Beach. Severely understrength, Easy Company were nevertheless given this daunting assignment. 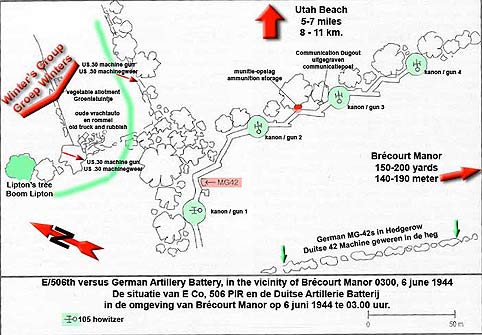 The operation was a considerable success, the 14 men (plus reserves) overwhelming a numerically superior force and achieving their objectives of destroying the 105mm guns. The actions of Easy Company that day are still used as a prime example of how to assault a fixed position at the United States Military Academy at West Point.

Lt. Winters exploits are detailed in Campaign D-Day Overlord, along with a scenario so that you may attempt to replicate his feats on the tabletop. Ed Rossman did just that. He tells us more:

Ed: With the trenches and terrain set up in as historically correct a position as possible, we were ready to go. 14 US paratroopers against 47 Germans was going to be an exciting game. The US objectives were to spike all 4 howitzers and capture the classified map from the Bunker. We used tabs to mark the Easy Company Leaders. 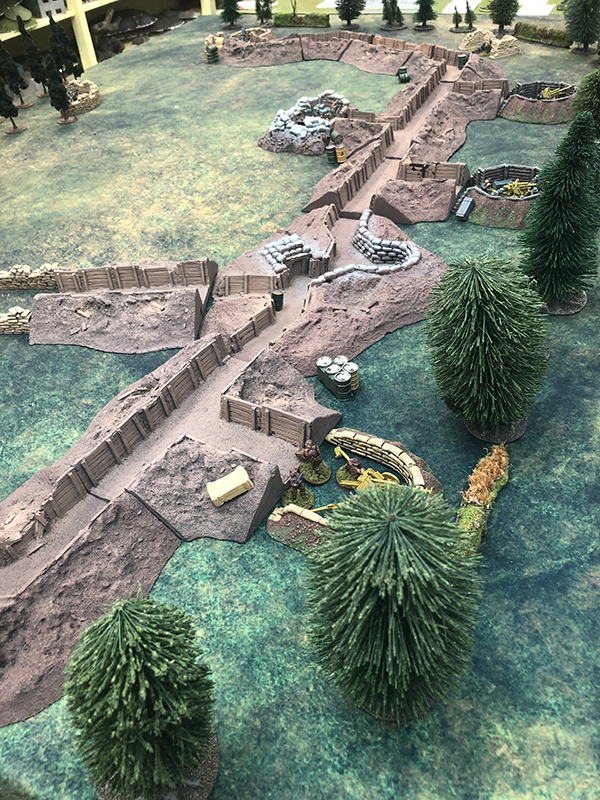 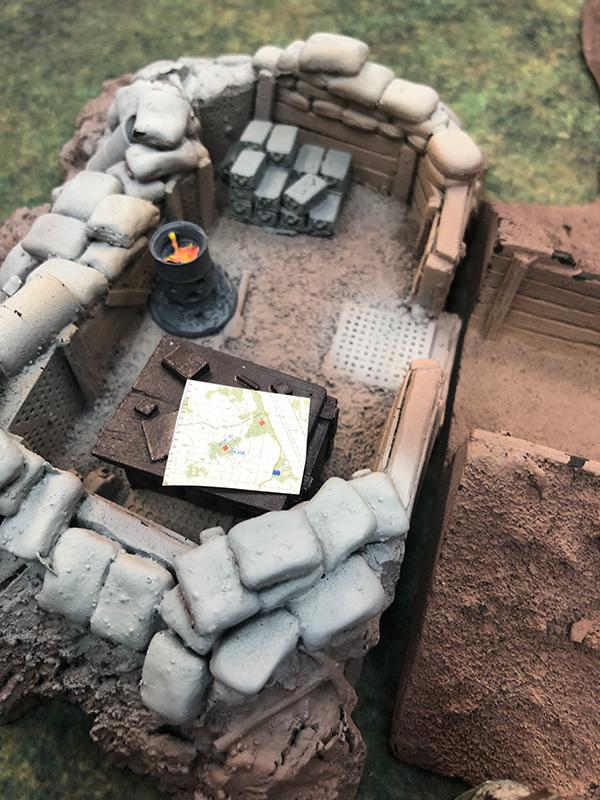 There’s an actual map in there

After Lt Winters positioned his men, they stormed out of the woods onto the German positions. Covered by the 30 cal machine guns, the Easy boys took out the first German MMG position fairly quickly. As Sergeant Lipton and another trooper entered the southern end of the trenches, they were cut down by the German Machine Guns.

The Paratroopers then assaulted the first 105 and destroyed the gun. As E Company started heading East down the trenches, the fire was getting much heavier. More troopers fell, but Winters kept leading from the front, inspiring his men. The Germans made numerous attempts to take the Airborne leader down but he kept going. 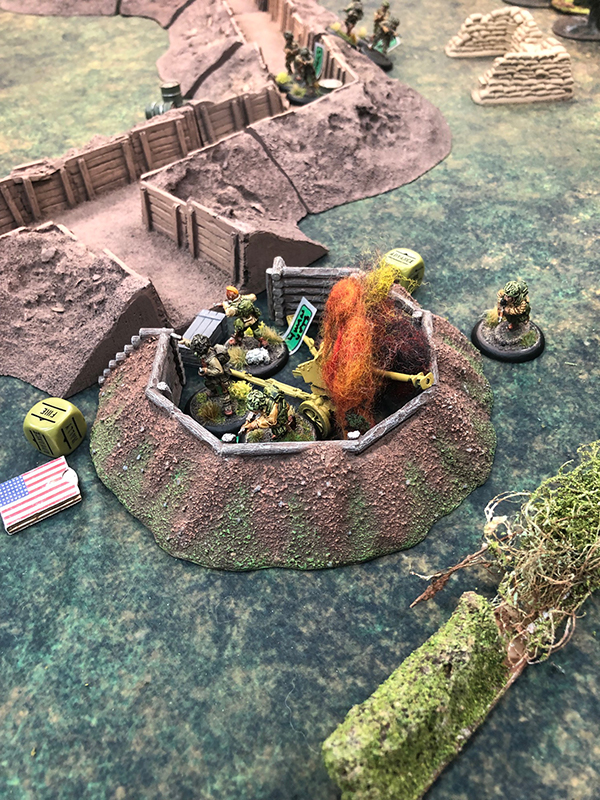 Campaign D-Day Overlord also contains rules for using “characters” of the theatre including both Lt. Winters and 2nd Lieutenant Ronald Speirs. Winters was well respected following his exploits at Brecourt Manor. When included within an army, he confers a significant morale bonus to his men.

The Map and the Second Gun

The troopers attacked the HQ Bunker killing the German Lt Colonel (Commander) and his comrades. The 101st now had the classified map. Due to the confusion of the 101st just dropping in on the Germans from all different directions, one of their own Machine gun teams accidentally fired on their own 105 gun position. Luckily they didn’t take any casualties but the confusion allowed Winters to consolidate his men and they moved towards the second gun position. But this gun crew wasn’t going down without a fight taking a few more troopers with them before they died. 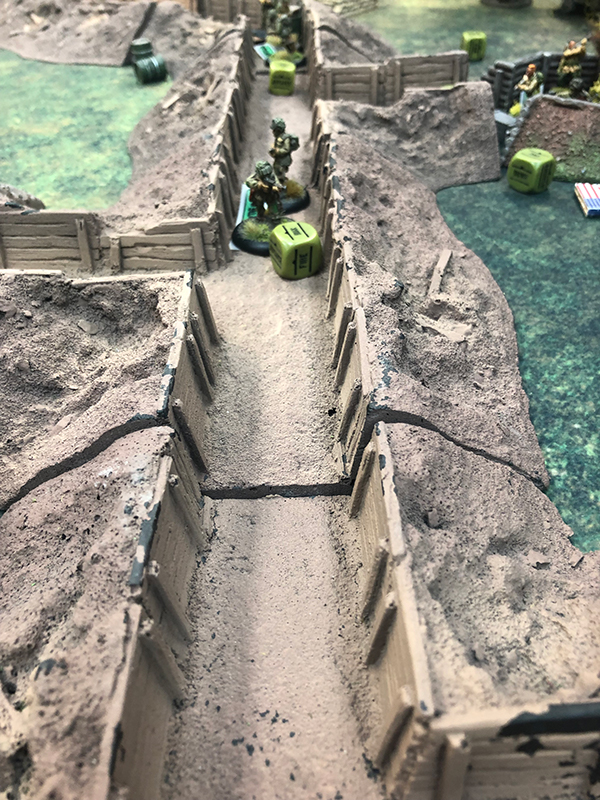 Unfortunately, the surviving troopers didn’t have any demolition equipment with which to try and spike the gun. While waiting for explosives to arrive, the German reserves appeared. The Germans assaulted the Americans, cutting them down and retaking the gun. The remainder of Easy Company regrouped and mounted a second assault. The Germans were defeated, but the US troopers suffered several more casualties in taking the gun position for a second time. 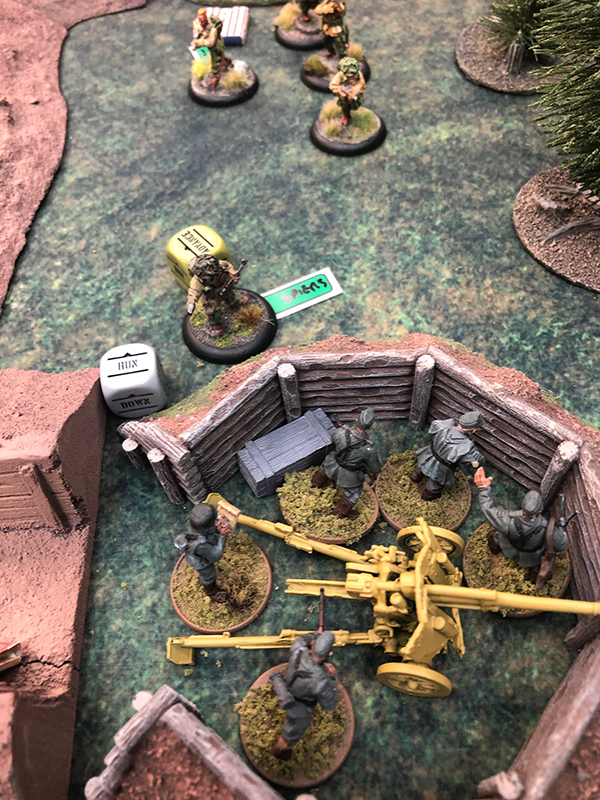 Lt Spiers arrived with the TNT but the game ended before he could spike the Cannon. So Easy Company had 2 Victory Points (destroying one gun and seizing the map) and the Germans had 3 Victory points for the 3 guns that were still operative. So the battle ended a draw. What a great game!

Thank you Gamers Haven for hosting and thank you to all the players for playing (Tony, Rob, Drew, Troy, Brent, Dave). 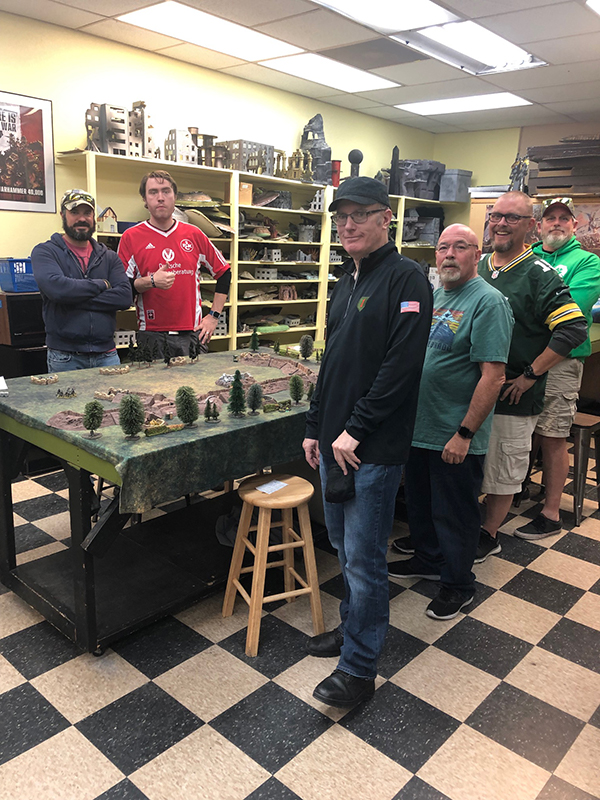 If you’d like to try your hand at this scenario you can do so by picking up the Campaign D-Day Overlord book. Within you’ll find a wealth of linked scenarios, troop types and theatre selectors, enabling you to assault the beaches and inland fortifications as the Allies or repel the invasion force as the Axis forces. 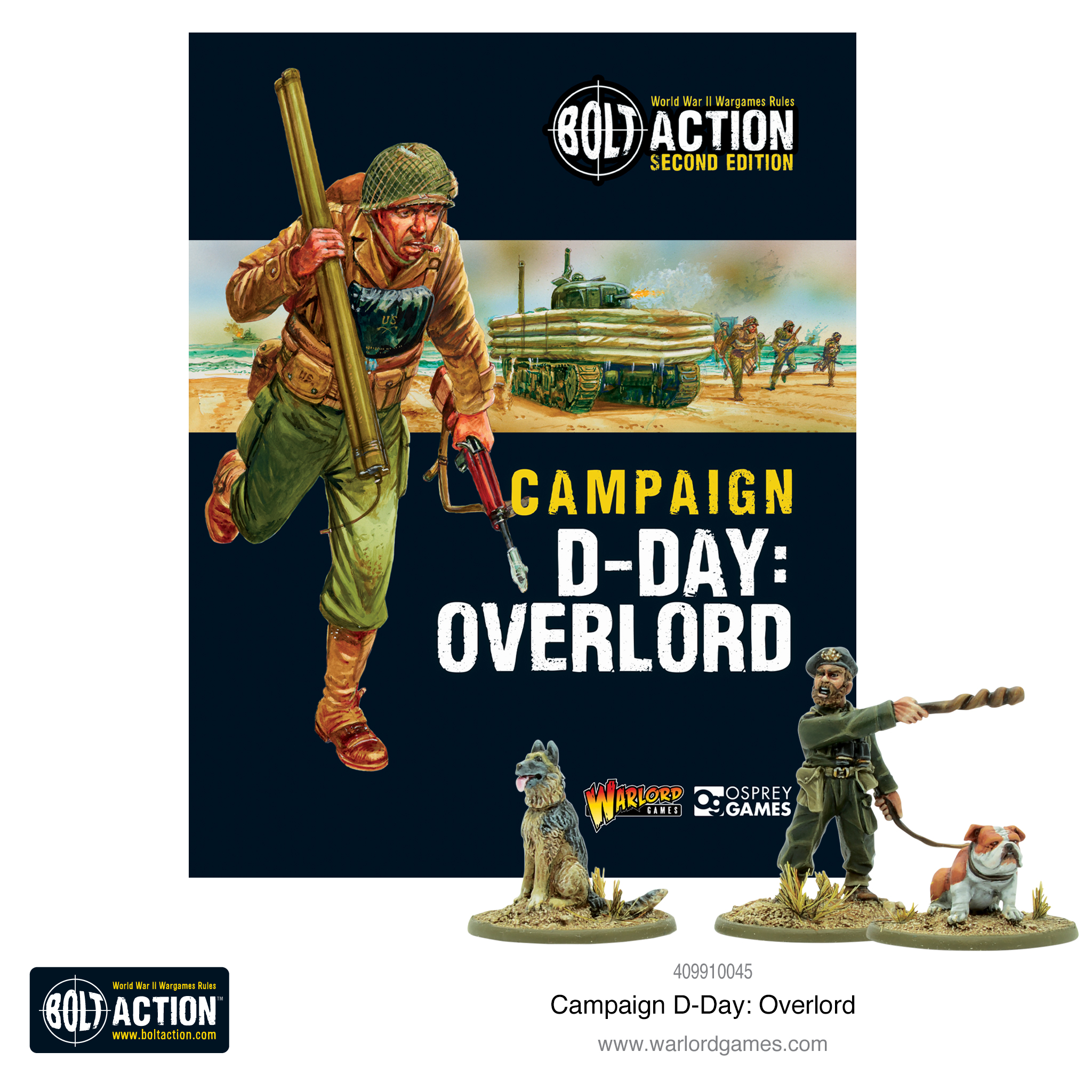 Dan can often be found contemplating the mound of unpainted minis building up under his desk. He has a tendency to roll lots of ones. He also has a tendency to complain about rolling lots of ones.
View Profile | View all posts by Dan Hewitson
Judge Death: The Crime isss Life
Pike & Shotte: Rise of the Musket