Inside our new book - D-Day: British & Canadian sectors, you'll find an army list for the soldiers of the Luftwaffe Field Division.

Inside our new book – D-Day: British & Canadian sectors, you’ll find an army list for the soldiers of the Luftwaffe Field Division.

During the early years of the Second World War and throughout the early German successes, the various inherent weaknesses of the Luftwaffe were masked by the overwhelming success of Blitzkrieg. When the Allies stopped the German advances at El Alamein and Stalingrad, it was apparent that the Luftwaffe’s command of the skies was far from undisputed, and losses were heavy. With fewer aircraft, there were thousands of personnel of various trades without the equipment to carry out their core role.

Get your Field Division off the Ground! 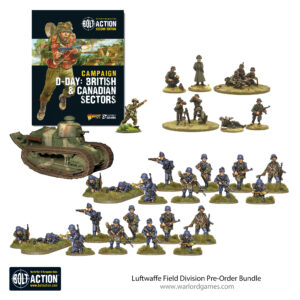 This pre-order bundle is the best way to get your new army off the ground and includes a copy of the new campaign book. You’ll get two squads of Field Division soldiers, a Blitzkrieg German support group (to reflect the issue of outdated uniform items to the Field Division), which gives you access to vital support weapons like medium machine guns and mortars, and a captured French light tank to bolster your fragile defences!

Elements of the Heer wanted this large amount of ‘wasted’ manpower to be incorporated and divided across the army; unfortunately for them, Reichsmarschall Hermann Goering had other ideas. Goering, possibly fuelled by his own ego, wanted his own personal army (in addition to the already existing Fallschirmjäger and Herman Goering Division), like the SS or early SA.

Goering put a plan forward to Hitler to form all these ‘unemployed’ Luftwaffe personnel into a fighting force under Luftwaffe command. The initial wave of transferred personnel and volunteers were hastily trained by airborne soldiers; by the end of 1942 this minimal training had deteriorated even further in quality. The NCO and officer cadres were never meant to be frontline soldiers; their skills and leadership qualities were exceptional in their own respective fields, but when it came to the bloody business of facing the enemy as an infantry commander they were generally poor.

Although the army took overall tactical control of the field divisions, the actual running of the operations was put on Luftwaffe officers and NCOs. This was distinctly evident when most of the units faced combat; they simply dissolved under pressure from enemy forces and were often wiped out.

The Divisions faced further significant difficulties: they were understrength to start with and lacked motorised transport and modern equipment. The 16th and 17th Luftwaffe Field Divisions (16. FD(L) and 17. FD(L)) in the west had far less of a bloody start to their existence, with training in somewhat peaceful cities in France and the Netherlands. However, the Allied landings saw them moved by rail into the French coastal areas. Neither Division had seen any actual fighting; unfortunately for them, this would take a dramatic turn as the tide began to turn in the west on 6 June.

The Field Division present a unique challenge to German players. Their lack of equipment and training make them handle very different from a force of veteran panzer grenadiers. You’ll have to manage your morale, using officers to bolster your fragile battle line. Re-purpose anti-aircraft artillery for use against enemy tanks and infantry, shredding the assault force with precision fire from your 88s, and a storm of flak from the quad 20mm flakvierlings! 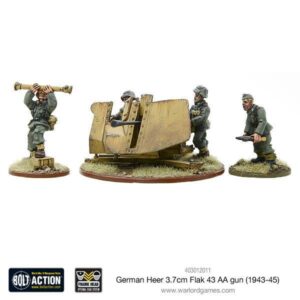 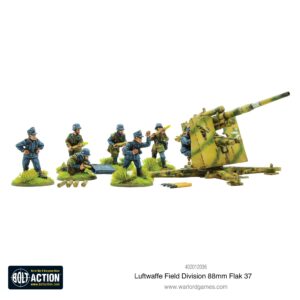 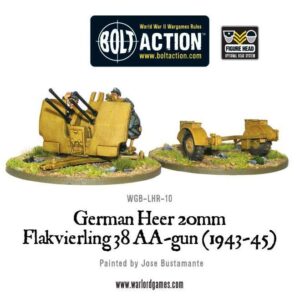 Tom spends most of his time buying books and painting miniatures. He enjoys putting animals on the bases of his miniatures and half-finishing side projects. Some say that he lives in a tower on top of some windswept northern hill with his wife and cow-patterned cat, Spaghetti.
View Profile | View all posts by Tom Mecredy
Sound the Charge! Prussian Hussars & Uhlans
Black Seas: The Battle of Trafalgar