Spotlight: Arnhem at the Rijn Hotel

We’re crossing Pegasus Bridge today with regular contributor Chris Brown, who’s brought us a report of his latest escapades in the Netherlands. Chris and his wife are huge wargamers who both wanted to commemorate the Battle of Arnhem in style.

Most of you will be aware that there was a Bolt Action event over the commemorative weekend at Arnhem last month. It was not a tournament in any sense, though there was one prize – more on that later – just a group of people getting together to play games with a Market Garden theme. Naturally being in Arnhem was an attraction in itself, but we were able to play in a building that was actually fought round (and through) during the battle. The building in question used to be called the Rhine pavilion and is now part of the NH Rijn Hotel. Pat and I go there as often as we can and have played many games there and have either run or taken part in a couple of larger games in the past.

This time we were a bit more ambitious. We could have just invited people to come along and have a bunch of ‘standard-size’ BA games running simultaneously, but we have a weakness for large projects and we are prone to getting carried away with wargame madness. Accordingly, we decided to have a range of large games that would run each evening, which would leave everyone free to explore the battle areas and museums in the daytime.

The next question was how to get in touch with potential participants and for that, we found that Facebook was our friend. With the help of Paul Walker (The War Room and WarHQ.com), we set up a ‘general invitation’ group with the highly-original title of ‘Arnhem Wargames’ and posted links on every Facebook Bolt Action page we could find.

A selection of British airborne troops and vehicles, ready to be deployed.

As every student of war (and wargames) will be aware, logistics are everything and this project was no exception. The first challenge is obviously the kit…figures and scenery. Our plan was to ensure that nobody else actually needed to bring anything at all; a major consideration given that most of the players would be travelling from the UK by plane.

At first glance that was not a big issue – my wife Pat and I have fairly (AKA ‘ridiculously’) large collections of suitable models; the challenge lay in getting them to Arnhem and in particular getting them to Arnhem from Shetland, which involves getting on an overnight ferry just to get as far as Aberdeen. Fortunately two of our group – Tom and Ann Howley – decided they were going to drive from Aberdeen and generously offered to let us fill their car with a raft of boxes full of toys. Many readers will be familiar with Tom’s painting service ‘Alba Studio’ which has featured here on the Warlord site and who have painted a lot of our figures. We were also lucky enough to have some local BA players on board and owe a big ‘thank you’ to them for bringing along enough buildings and other scenery to cover one of the tables. 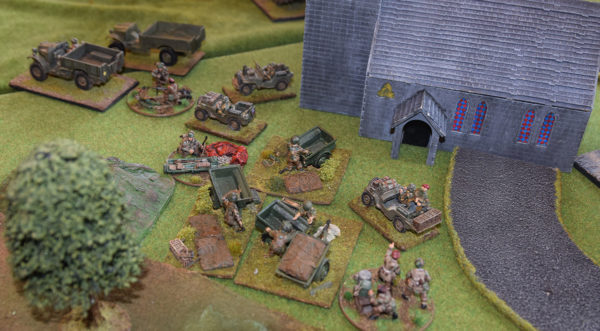 The Paras raid their drop canisters for supplies.

We decided to have four big games that could all run at the same time so players could have a different option each night. Naturally we had to have a game set around the bridge itself with 2 Para holding out against the SS (including Tom’s magnificent Aufklarungs army) but we wanted some variety, so there was also a ‘Road to the Reich’ game with XXX Corps pushing up the highway to relieve US Airborne forces, a game depicting the defence of the western aspect of the British 1st Airborne divisional area and a game set in the Ommershof area at Oosterbeek.

The latter was probably the most unusual project. Ommershof was a large country hopes and grounds set in the midst of dense woodland and was the scene of hard fighting for 21st Independent Company – my favourite WW2 British unit. The area in question is remarkably small – at most 100 yards by 300 yards and we have played several games set in that location using what we like to call ‘true scale’ – that is to say that the there is no actual ground scale and one inch on the tabletop equals two yards in ‘real life’. That has certain implications for weapon ranges….as in ‘we don’t have any’. With the exception of certain items that really were short-range weapons – such as panzerfausts and PIATs – if you can see the target you can shoot at it with the proviso that anything beyond 12 inches counts as long range. 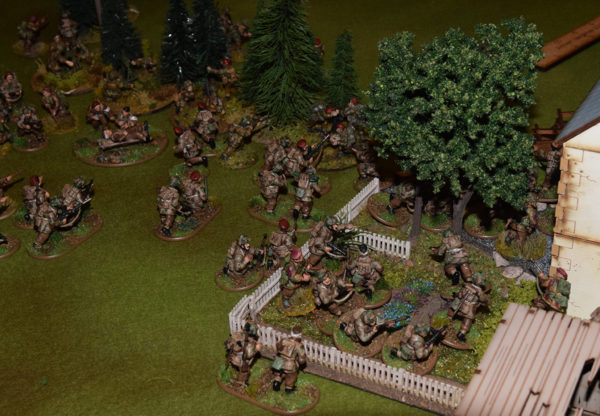 Paras on the attack!

One issue that can be a problem for big multiplayer games is activation – especially if the game is to be played in the course of a single evening.  If there are eight players each with their own colour of dice you can wait an awfully long time for one of your to come out of the bag. To overcome this we use a deck of as many cards as players have dice – if a red card is turned over all the allied players use one die (or more if applying ‘snap to it’) and all the Axis players do the same when a black card is turned over.

It is convenient, though not crucial – if all the players have the same number of dice so in order to make players prioritise and to maintain a good tempo we limit the players to 8 dice, though mostly they will have more units than that. We also apply the ‘slip away’ rule from the Operation Market Garden book; this allows you to move a unit a run move directly away from the enemy without having to pass an orders test – it still costs you an order die and the unit takes their pins with them.

The value of this – particularly in a large game with more units than dice – is that a unit with lots of pins can be withdrawn from the front line and replaced with a fresh squad before it is utterly destroyed. For most games, the Rally function does the trick perfectly well, but in a larger arena, it doesn’t quite do the job. 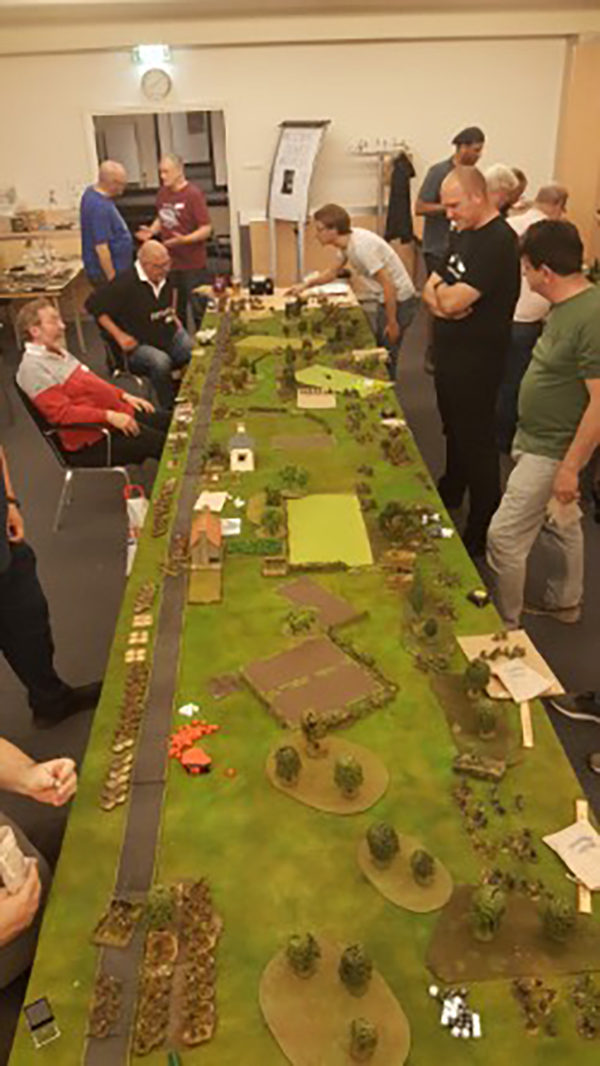 So far so good….but the project still wasn’t mad enough! For the third and final night we decided to do something really, really daft….in fact one of our players (that’d be you James Kelly) liked the sheer madness of it so much that he wants to start a club with T-shirts carrying the slogan ‘Silly Projects in 28mm’. How silly is silly? Well…..Paul, Pat and I spent late Saturday night and Sunday morning re-arranging the tables into a sizeable ‘U’ shape to depict the entirety of the Oosterbeek perimeter.

In this context ‘sizeable’ means about 25 x 5 feet for each leg, joined by a 16 by 6 table. The British defenders totalled something in the region of 700 figures a dozen anti-tank guns, a battery of 8 75m, pack Howitzers and maybe 30 jeeps. The Germans had well over 1000 infantry and at least 30 tanks, STuGs and armoured cars as well as Hanomags and Flak half-tracks to choose from.

So there we were…17 players and, at a conservative estimate, the better part of 40,000 points of goodies. This may not be the largest game of Bolt Action ever played – you may know different – but none of us has been able to identify a bigger one. 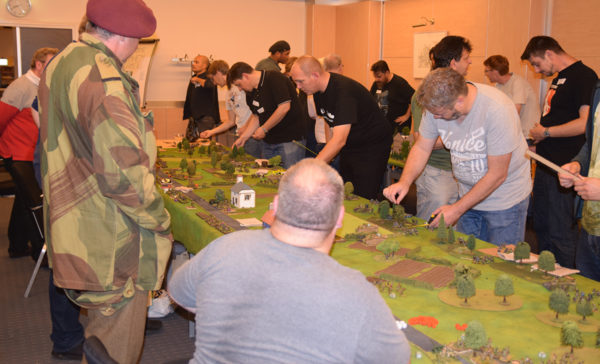 With games on this scale victory and defeat are not really very useful terms or even concepts. Your corner of the battlefield may be a total disaster while the rest of your team give the enemy a thorough hiding…or vice versa. These games are more about the narrative of the battle; it really is about taking part rather than winning or losing.

That said, we did have one winner – as mentioned at the top of this piece. Several companies kindly donated rather cool prizes for our raffle which raised a decent sum for MacMillan Cancer Research, but we held back one for a special award to be given to the most unfortunate player of the event. There was stiff competition (honourable mention for Chris Carr) but the prize just had to go to Jan Wendenburg for his exceptional ability to throw a vast number of 1s and 2s with outstanding consistency well beyond the bounds of statistical probability – an inspiring achievement!

We happy few, we band of brothers (and sisters)…

How did the event go overall? We must have done something right because nearly half of the players have already said they want to do it all again next year, however – no great surprise given that it will be the 75th anniversary of the battle – the NH Rijn Hotel is already totally sold out for that weekend and all the other hotels are in the same boat. That said, the search is on for an alternative venue, so you never know!

We do, however, hope to run a similar project next June. This time the theme will be Normandy and to be held at Warlord Games HQ in Nottingham. Obviously, it would be lovely to actually have it in Normandy, but hotels would be both extortionate (75th anniversary and all that) and very hard to come by, however if you know different drop us a line!

Tom spends most of his time buying books and painting miniatures. He enjoys putting animals on the bases of his miniatures and half-finishing side projects. Some say that he lives in a tower on top of some windswept northern hill with his wife and cow-patterned cat, Spaghetti.
View Profile | View all posts by Tom Mecredy
Frontline Report: Battle of Saumur
Spotlight: Using Bolt Action Command Blisters