Marking the end of the battle of France and one of the first major acts of the French resistance, Saumur is one of the many tales of heroism to come out of the war in the west. We’re delving into the history behind the battle, which is one of the key scenarios in our new campaign book!

As the newly-inaugurated Marshal Petain announced a ceasefire via radio broadcast, 10,000 soldiers of the German 1st Cavalry Division were advancing across the French countryside towards the town of Saumur, some 200 miles from Paris.

Saumur was home to the Ecole de Cavalerie, a military school and training centre specialised in training mounted units. Housed along the banks of the Loire river, the school’s cadets had regularly practised defending a 25 mile stretch of river, covering four bridges and the environs of the town.

French doctrine called for 80,000 men and several artillery divisions to properly defend a frontline of that size, but the commander of the school, Colonel Michon could only muster 800 cadets, plus some stragglers from a nearby tank training centre and some other retreating army units, including a unit of 200 Algerian riflemen.

Michon set about organising his defence, focusing on covering the four bridges across the Loire. All the bridges were wired up with high explosive and covered from the banks by the school’s antique machine guns and a small number of 25mm anti-tank guns.

Shortly after midnight on 18th June 1940 with German motorcycle reconnaissance units and armoured cars swarming around the river’s north bank, Colonel Michon gave the order to blow all four bridges.

With the bridges blown, the Germans attacked all along the 25-mile front, relentlessly probing for a weakness in the line where they could force a crossing. Under the cover of an intense artillery barrage, the Germans used rubber assault boats to ferry troops across the river, establishing several bridgeheads to the east and west of the town.

The cadets were hard-pressed, but were able to repulse the assault to the west of the town. In the east, the Germans forded the river near a farm at Aunis. To contain the breakthrough, the French dug a series of trenches and fighting positions. Heavy fighting would rage across the surrounding farmland for several days.

Eventually, the Germans would capture a bridge outside of Tours and outflank Saumur from the east. In the west, another crossing had been made and the town of Angers had fallen. Now partially encircled, the defence of the town was in peril.

With their situation untenable, and the beginnings of a formal armistice germinating on 20th June, Colonel Michon ordered a general retreat. The cadets buried their weapons and regrouped near the abbey of Fontrevault.

By 22nd June, the armistice had been signed at Compiegne and the cadets of the cavalry school were released rather than facing internment in a POW camp.

The Battle of Saumur in Bolt Action 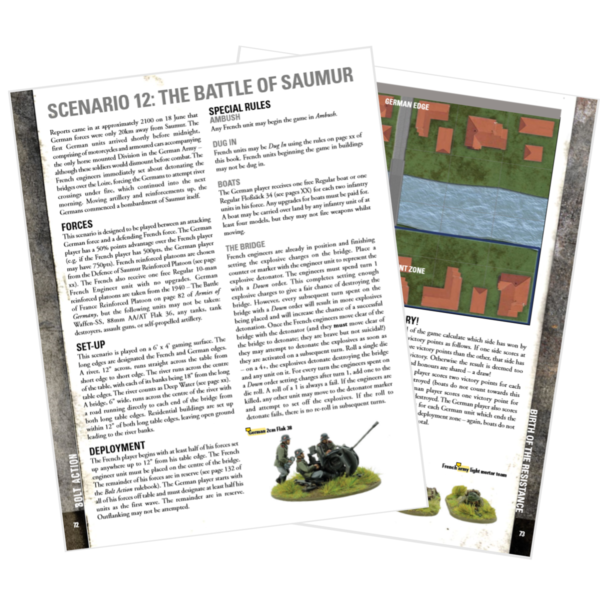 The Battle of Saumur scenario from the new campaign book.

The defence of Saumur is the 12th scenario in our new Battle of France campaign book. The book also presents unit profiles for the cadets of the cavalry school, with a unique force selector to help guide you in assembling your plucky defenders.

In the scenario, the French cadets must prevent the German forces from crossing the Loire river. A free engineers squad controls a demolition charge on the only bridge. Blowing the bridge forces the attackers to use boats to cross the river, effectively neutralising any close support from vehicles.

The scenario presents interesting tactical challenges for both sides. The French player must protect his engineers while also preventing crossings elsewhere along the river, also efficiently managing his smaller force to hold off the waves of German attackers.

Crossing the river, either using the bridge or swarming across in assault boats should be the German player’s primary objective. Overwhelming the engineer squad and preventing the destruction of the bridge allows them to thrust their more mobile units straight into the enemy’s centre. Equipping the first wave with assault boats will allow you to quickly outflank the defenders and bring the battle to a decisive conclusion.

Tom spends most of his time buying books and painting miniatures. He enjoys putting animals on the bases of his miniatures and half-finishing side projects. Some say that he lives in a tower on top of some windswept northern hill with his wife and cow-patterned cat, Spaghetti.
View Profile | View all posts by Tom Mecredy
Spotlight: Macedonian Successor States
Spotlight: Arnhem at the Rijn Hotel