One of our most popular Bolt Action sets is the German Pioniers plastic and metal boxed set, crammed as it is with goodies! Let’s have a good look at what is included and how they can help you on the field of battle.

First In Last out

Pioniers would often be in advance of the army or would be brought forward when needed to clear the way of obstacles, often under fire from the enemy. When attached to the Panzer companies they would be equipped with with some of the best kit available. Here you can get the Pioniers with their trusted Hanomag loaded with bridging equipment and a supporting dispatch rider to add to your Kradschutzen squad. 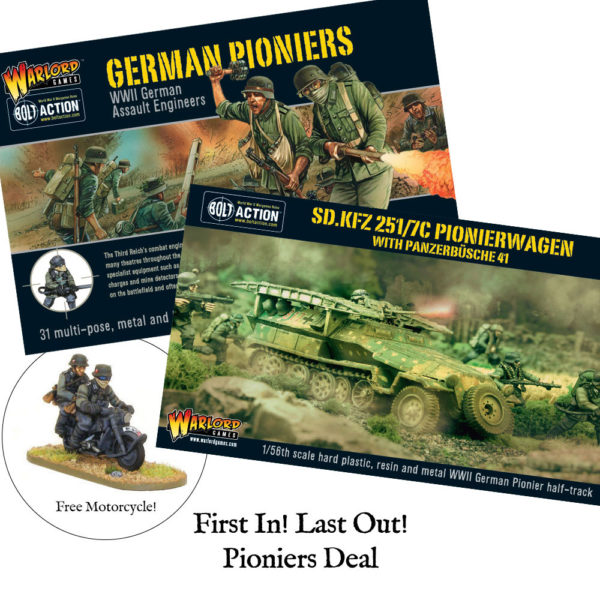 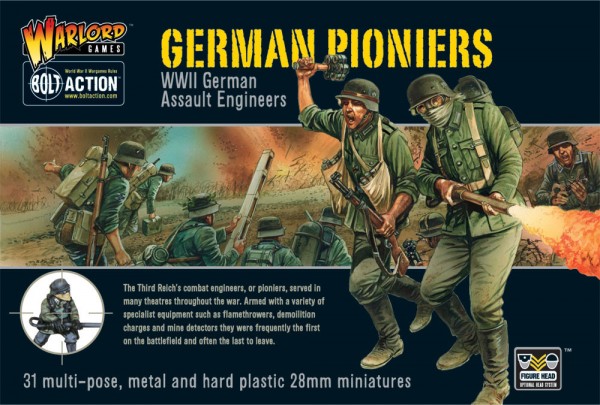 German Assault Pioniers were skilled at building all manner of fortifications, communications lines, tank traps and minefields. In addition to building useful structures, they were adept at the destruction of similar enemy positions, blowing railway lines and making roads unsafe for the enemy to travel along.
As the German quest for global superiority stalled and finally crashed down around them, the pioniers were tasked with the vital job of slowing the Allied advance, be it by booby trap, minefield, blown bridges, or taking the fight directly to the enemy.

Often overlooked in favour of the dashing panzers or elite Waffen-SS troops, the pioniers were the unsung heroes of the German military machine and you can now field them on the battlefield with these superbly equipped miniatures! Within this boxed set you’ll find flamethrowers, demolition charges, anti-tank rifle, mine detector, assault pistols, engineers packs and much more besides! 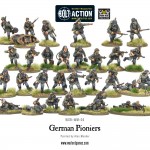 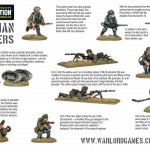 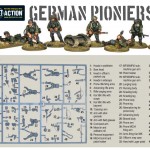 The first 7-man squad painter Alan Mander of Mandertory Miniatures built for us from the boxed set contains an NCO carrying a looted Soviet PPSh submachine gun – you can tell the NCOs apart from the rankers by the white edges on their collars as much as their sleeve rank stripes. 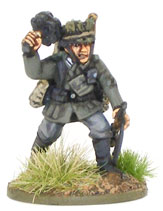 To replicate the squad carrying anti-tank grenades Alan has given three of them suitable weapons – one sprints forwards with a teller mine at the ready, another wears World War One era stick grenade pouches and the third prepares to hurl his geballte ladung multi-headed stick grenade! 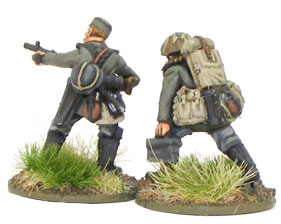 Laying down suppressing fire for the pioniers to get forwards is a-2-man MG34 team with gunner blazing away  from the hip, gripping the bipod as the recoil threatens to push him backwards. Alan decided to give him a sidecap and attach his stahlhelm to his belt along with his other field equipment. His loader labours forwards under the weight of his engineers pack, the ammunition box he carries and the belt of ammo draped around his neck… 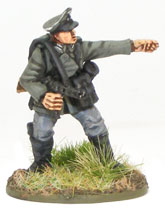 Leading these tough combat engineers this German officer has taken the opportunity to take possession of a Soviet submachine gun – the iconic PPSh-41 but with the less common sickle magazine. Pionier officers were more than likely to wear the stahlhelm in combat but for appearances sake Alan has chosen the classic peaked cap. 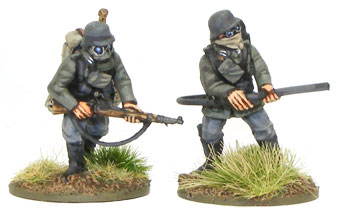 One trademark of the combat engineers in the Wehrmacht is the flamethrower – in this case the Flammenwerfer 35. Here the 2-man team have donned makeshift face protection to deal with the backblast from the superheated fuel. One wears his gas mask whilst the other goggles and cloth wrapped around his face. Flamethrower operators were issues with suits made of acid-resistant synthetic material but these were rarely worn.

The second squad built from the contents of the box contains 8 men. Again this quad contains some exotic pieces of equipment in addition to the usual rifles and MP40 submachine guns… 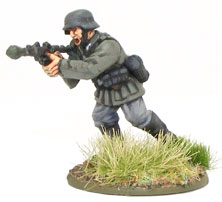 This pionier is armed with a sturmpistole. In effect it is a converted flare gun designed to fire different types of grenades, including anti-tank round. You can find the rules for fielding this weapon in our free-to-download Additional Units PDF. 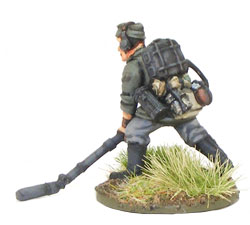 Also added to this squad, more for looks than for effect, is a pionier with Wien (Vienna) 41 mine detector. Pioniers were often first onto a battlefield to take out enemy fortifications, build bridges, etc and the last to leave as they prepared the defences for the German forces. Rules for using mine-clearing equipment are included in the supplementary theatre book Battleground Europe, covering D-Day to Germany. 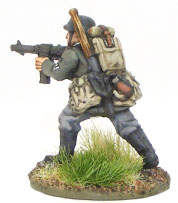 One trademark of the German assault engineers is the special pioniers backpack. Crammed with all manner of specialist gear the backpack was an essential element of the pioniers working day.

Another specialist piece of kit is this Granatbüchse Modell 39 (GrB 39) grenade launcher. With the effectiveness of the anti-tank rifle being on the wane as tanks became more heavily armoured the German military began refitting them as grenade launchers by shortening the barrel and attaching a firing cup to take rifle grenades. The GrB39 could fire an anti-personnel grenade, a light anti-tank grenade and a large-diameter anti-tank grenade. It would still be in action at the end of the war. Rules can be found for using this in games of Bolt Action here.

The third squad Alan put together also has specialist equipment and the squad has been built as prone or crouching. Putting together squads with a similar dynamic can make them easier to identify during games as well as looking rather atmospheric, keeping low while they perform their battlefield role…

Here an engineer carries on regardless of his head wound, crawling forward to place his gestreckteladung field made extended charge. Similar in use to the American Bangalore Torpedo these were ideal for helping to clear minefield, barbed obstacles, etc.

Helping to keeps the heads of the enemy down so their colleagues can get to work, this MG34 light machine gun team is an invaluable addition to the pioniers arsenal. 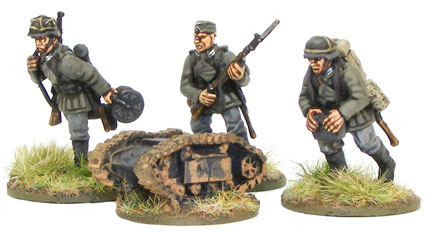 Another great addition to this boxed set is the Sd.Kfz 302 Goliath tracked mine. The Goliath was used by the German engineer units in a variety of roles. It was essentially a radio-controlled tracked bomb, carrying a big charge of high explosives direct to where it was needed – commonly a pillbox, minefield or disabled enemy tank. The controller steered the robot tank by using a wire connected to a simple control box.

The Goliath was fairly successful and used on many fronts, and though slow and vulnerable to small arms fire would be a frightening sight as it rumbled towards you with its deadly payload! You can find out how to field the Goliath in your Bolt Action games here. 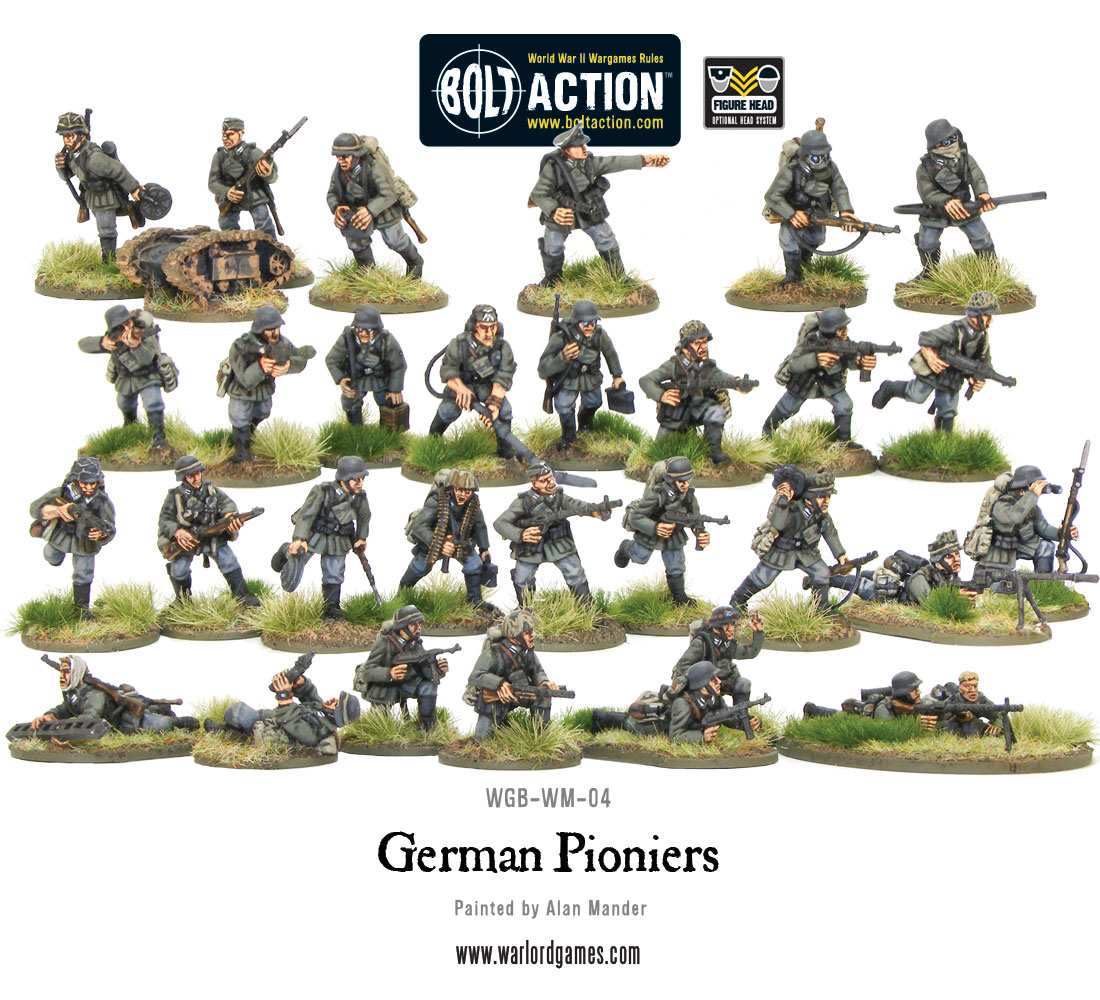 You can field the contents of this awesome boxed set during the Blitzkrieg years or during the colossal conflict on the Eastern Front. Rules for regular Pionier squads are in the Armies of Germany supplement whilst rules for using them as Sturmpioniers can be found on our free Additional Units PDF.

Mount up for getting into action quickly by adding another Pioneer Halftrack or to strike fear into the enemies hearts take a Flamethrower halftrack: 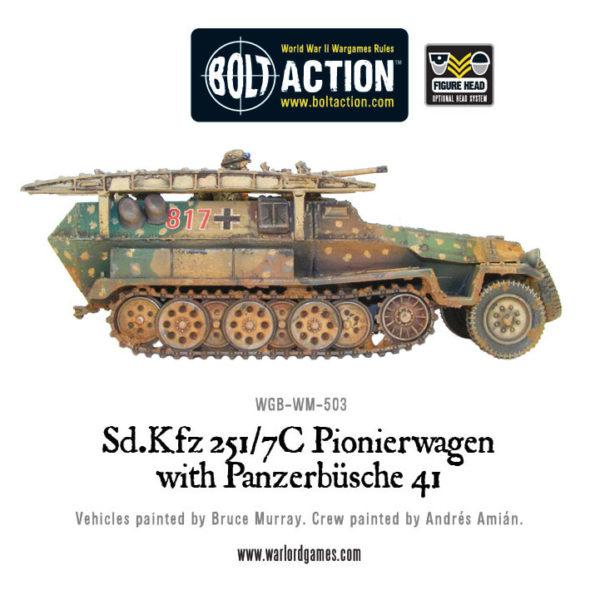 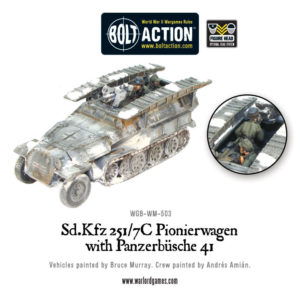 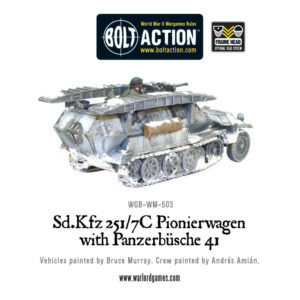 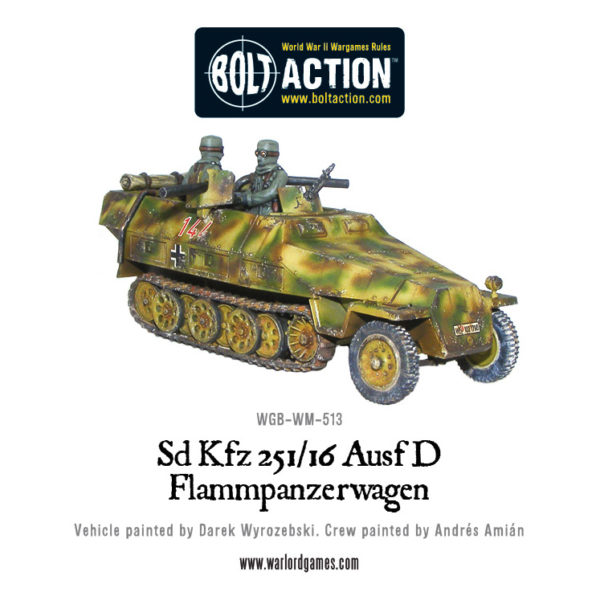 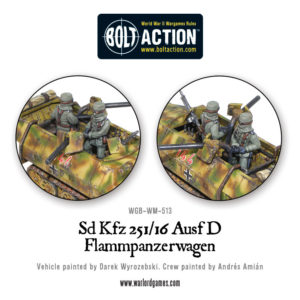 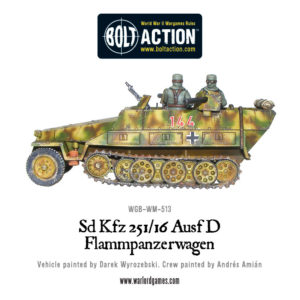