New: Poland 1939 the birth of Blitzkrieg 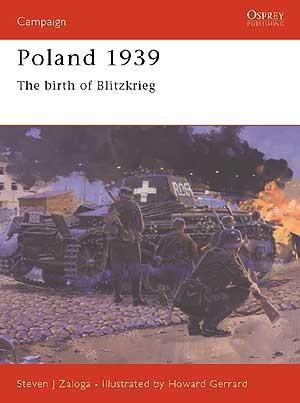 The German invasion of Poland on 1 September 1939 began World War II in Europe, pitting the newly modernized army of Europe’s great industrial power against the much smaller Polish army and introducing the world to a new style of warfare – Blitzkrieg. Panzer divisions spearheaded the German assault with Stuka dive-bombers prowling ahead spreading terror and mayhem. This book demonstrates how the Polish army was not as backward as it is often portrayed and fielded a tank force larger than that of the contemporary US Army. Its stubborn defence did give the Germans some surprises and German casualties were relatively heavy for such a short campaign.

Steven J. Zaloga has a BA in history from Union College and an MA from Columbia University. He did graduate research on the 1939 campaign at Universitet Jagiellonski in Krakow, Poland, during the 1970s. He is currently a senior analyst for the aerospace research firm, Teal Group Corp, and an adjunct staff member with the Strategy, Forces and Resources division of the Institute for Defence Analyses in Washington, DC. He has written over 50 books on military history and technology, as well as many television documentaries.Howard Gerrard studied at the Wallasey School of Art and has been a freelance designer and illustrator for over 20 years. He has won both the Society of British Aerospace Companies Award and the Wilkinson Sword Trophy and has illustrated a number of books for Osprey including Campaign 69: Nagashino 1575 and Campaign 72: Jutland 1916. Howard lives and works in Kent.