Defend the beaches of Normandy from the Allied landings on D-Day with this new set of three pre-painted resin bunkers.

The Germans’ first line of defence was the English Channel, guarded by the extensive Atlantic Wall, which Adolf Hitler ordered to be constructed in his Directive 51. The “wall” stretched from Norway to Spain in varying degrees, but was most elaborate in the sectors facing the English channel. Rommel had the wall fortified with pill boxes, artillery, machine gun positions and extensive barbed wire as well as laying hundreds of thousands of mines to deter landing craft.

Of course, these types of bunkers would also have appeared in other areas too so they are not just relevant for games set in Normandy.

This set contains three bunkers with removable tops so you can place your troops and guns inside. Note that the miniatures shown in the images above are for scale only and are not included in this set! 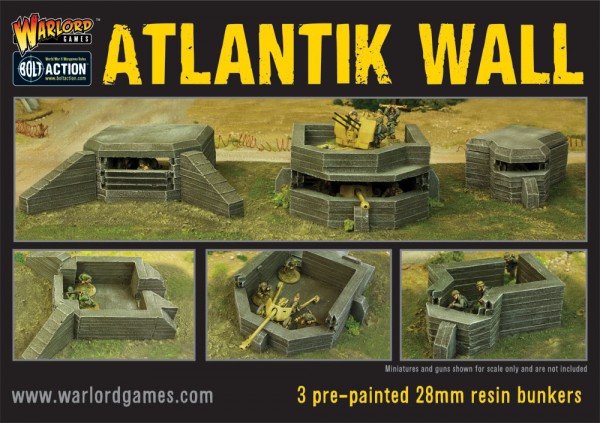