Shooting Stars and Panthers have been sighted over "MiG Alley", the first instances of jet-to-jet combat have begun...

MiG Alley shifts us into the future, moving away from the relatively sluggish prop-driven aircraft of World War 2 towards the shrieking jet aircraft of the Cold War!

To represent the technological leap forward that occurred between the end of World War 2 and the start of the Korean War, we’ve introduced a new aircraft trait: Jet.

The jet trait allows an aircraft to immediately gain an advantage level on being activated. It cannot benefit from this ability if another jet is within 9″. This effectively gives jet aircraft a free use of dive or manoeuvre. Combined with their high speed, diving jets can rocket back and forth across the table, using long slashing passes to engage their opponents before moving out of danger.

Prop planes can’t climb for advantage within 9″ of a jet, but they may be able to outturn a jet with their much lower minimum move. 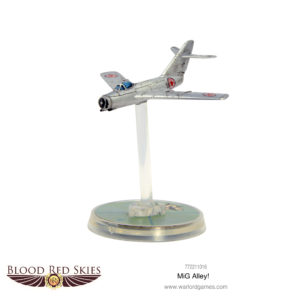 Unlike the western allies, the Soviet Union did not have a domestic jet fighter program during the Second World War.

What it did have was a huge amount of the research and development completed by Nazi Germany, which was used to produce the MiG-9 – an unexceptional first-generation jet using reverse-engineered BMW jet engines.

Despite Stalin’s reservations, the Soviet Union acquired 25 Rolls Royce Nene jet engines, which when combined with the research on swept-wing aircraft obtained from the Germans, produced the MiG-15

Armed with a pair of 23mm cannons and a single 37mm cannon in the nose, it proved to be a fantastic interceptor, able to shred enemy aircraft with a blizzard of high explosive shells. An interesting quirk of this pairing was that the two calibres had vastly different velocities, providing the unnerving experience of the faster 23mm shells passing over an aircraft, while the 37mm would pass under.

The MiG-15 was widely exported to Soviet client states and first saw service during the Korean War, where it completely outclassed the P-80 Shooting Stars and Gloster Meteors – eventually meeting its match when the F-86 Sabres joined the battle.

You’ll find two of these aircraft in the MiG Alley box set (see below). 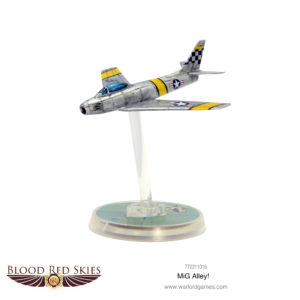 By 1951, the US domestic fighter jet program had already turned out some middling straight-wing designs – universally plagued with mechanical faults and reliability issues.

While the P-80 Shooting Star and F-84 Thunderjet were sufficient for ground attack work, they were unable to stand up to the lightning-fast MiG-15s.

The F-86 Sabre was the first aircraft to benefit from Operation Paperclip – a program employing German scientists to further develop the projects they’d worked on under Hitler’s regime. Along with jet engines and aircraft, it also continued the German’s ballistic missile program – resulting in the American space vehicles and nuclear missiles.

Early F-86s were still unable to match the MiG-15 pound-for-pound. They could potentially out-dive them, but they could still be outmanoeuvred. The upgraded F-model closed the gap and allowed the US to dominate the skies over the Korean battlefields.

You’ll find two of these aircraft in the MiG Alley box set (see below). 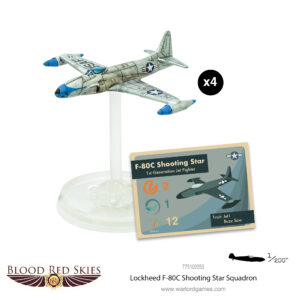 A single seat fighter-bomber, the Lockheed F-80C was a later production version of the P-80, the original designation denoting pursuit. However, with changes to the American system of designation in 1947, the Shooting Star would be re-designated as a ‘F’, a fighter. The Shooting Star was designed in fewer than 6 months around the British Halford H.1 (Goblin) engine and first flew in 1944, with P-80s flying under combat conditions in Italy the next year.

By the time of the Korean war, the aircraft was considered somewhat obsolete, but was at the forefront of the initial sorties across ‘MiG Alley’, of which 1500 flights were made in the first four months alone. It was on November 8th 1950 that a Shooting Star claimed the first MiG-15 shot down, thought to have been the first ever instance of jet-to-jet combat.

Now available to order in a four aircraft squadron in high-quality Warlord Resin. 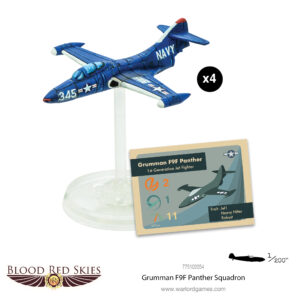 The F9F Panther was Grumman’s first production jet fighter, used extensively during the Korean War. It proved one of the United States Navy’s first successful carrier-born jet fighters and was the first jet fighter to be used by the Blue Angels aerobatics display team.

The F9F would remain the primary US Navy and USMC jet fighter and ground-attack aircraft of the Korean War, flying around 78,000 sorties in total. The Panther claimed the first US Navy aerial victory of the war claiming a prop-powered Yak-9 in July 1950.

In one little-known instance, a single Panther shot down four Mig-15s in a single 35 minute period, a unique feat for pilot Lt Royce Williams. This is in spite of the Panther’s relatively poor speed when compared to the nimble MiGs.

Other notable pilots of Panthers in Korea include first man on the moon, Neil Armstrong (who in fact bailed out during a combat mission when his aircraft was brought down by wire strung out across a valley), as well as fellow astronaut John Glenn and baseball star Ted Williams.

Now available to order in a four aircraft squadron in high-quality Warlord Resin.

Join the battle for air superiority over Korean and grab your MiG Alley set today! 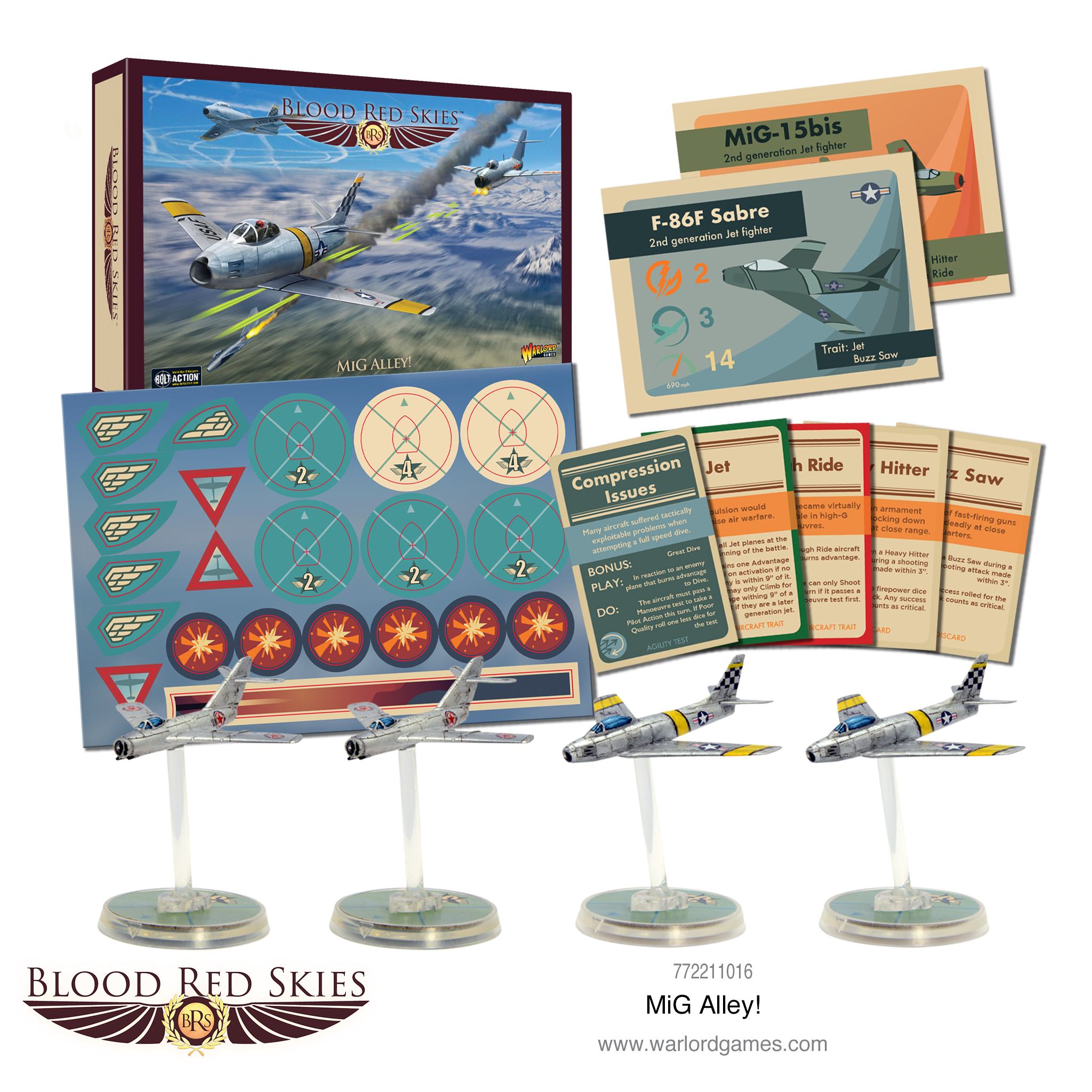 Tom spends most of his time buying books and painting miniatures. He enjoys putting animals on the bases of his miniatures and half-finishing side projects. Some say that he lives in a tower on top of some windswept northern hill with his wife and cow-patterned cat, Spaghetti.
View Profile | View all posts by Tom Mecredy
Blood Red Skies: The Supermarine Spitfire MkII
Blood Red Skies: Naval Strike!