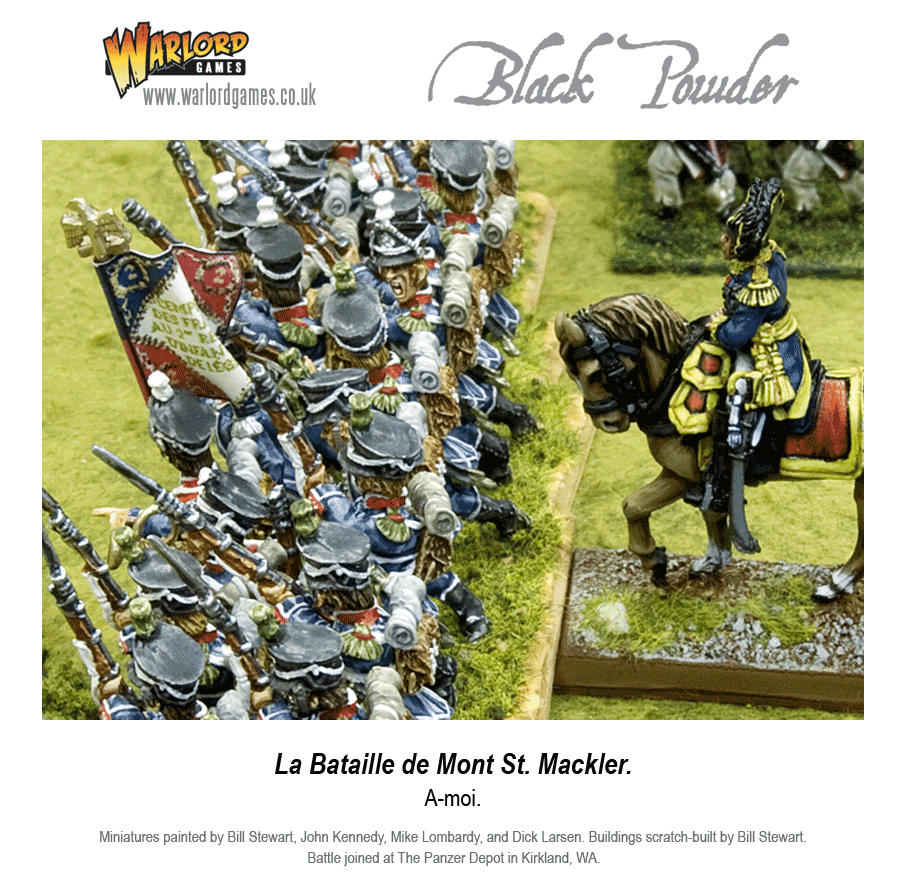 We had another game of Black Powder this weekend at The Panzer Depot in Kirkland, WA. We played the ‘Battle of San Miguel’ scenario from the rules book, substituting Napoleonic troops for the Isabelinos and Carlists.

Bob “Fox of the Steppe” Mackler commanded his Russians, Mike Lombardy and Bill “The Meat Grinder” Stewart commanded Austrians, consisting of BIG battalions of regular infantry and un-big battalions of militia, supported by a battery of 4-pounders and a couple squadrons of light cavalry. 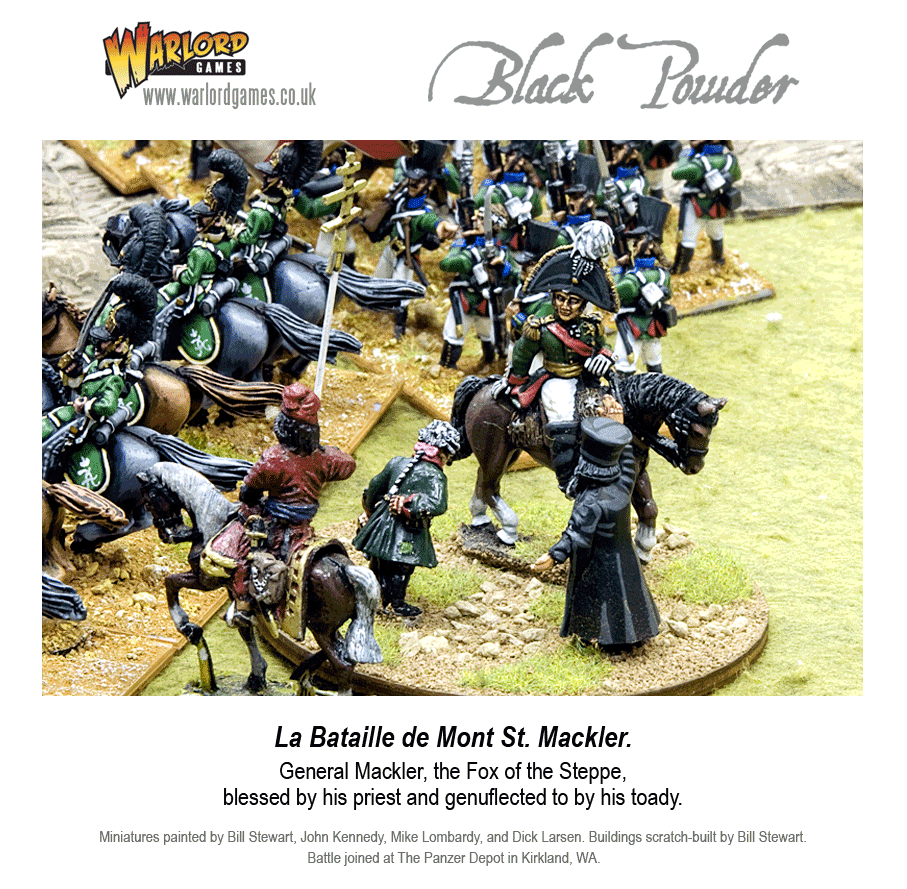 Dick Larsen commanded the French forces, with Rich Knapton, Brett Hendrickson, and me as sub-commanders. My own command consisted of a battalion of line infantry, a battalion of légère, and a battalion of Frenchmen in Bearskins (Français dans les bonnets à poils) who were my corps d’elite. I also had a squadron of light cavalry (even if the figures looked like carabiniers à cheval) and a battery of guns.

The victory conditions for the game were to take and hold the hilltop town in the center of the board, which we dubbed Mont St. Mackler for our game. The Russo-Austrians had the advantage in gaining the town first because their set-up put them close to it and the French needed to ford a river—while annoyed by mad monks—to get to grips. 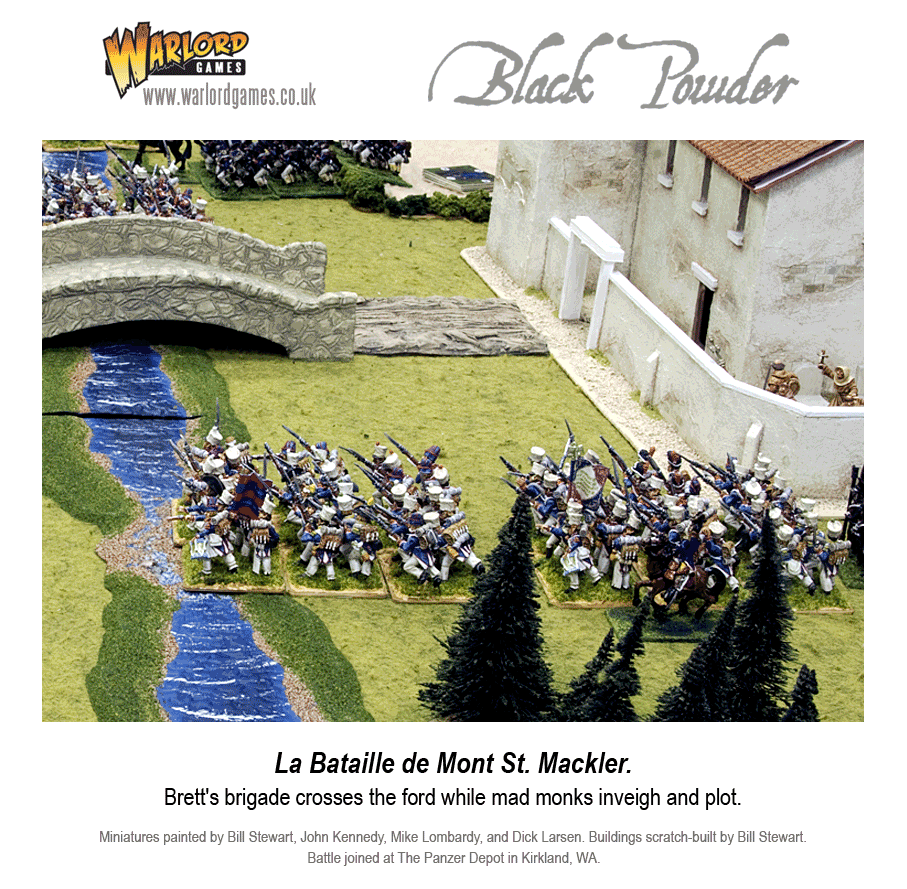 Once across the stream, we formed up and prepared to launch our gallant battalions against the sausage-eating Austrians and God-knows-what-eating Russians. 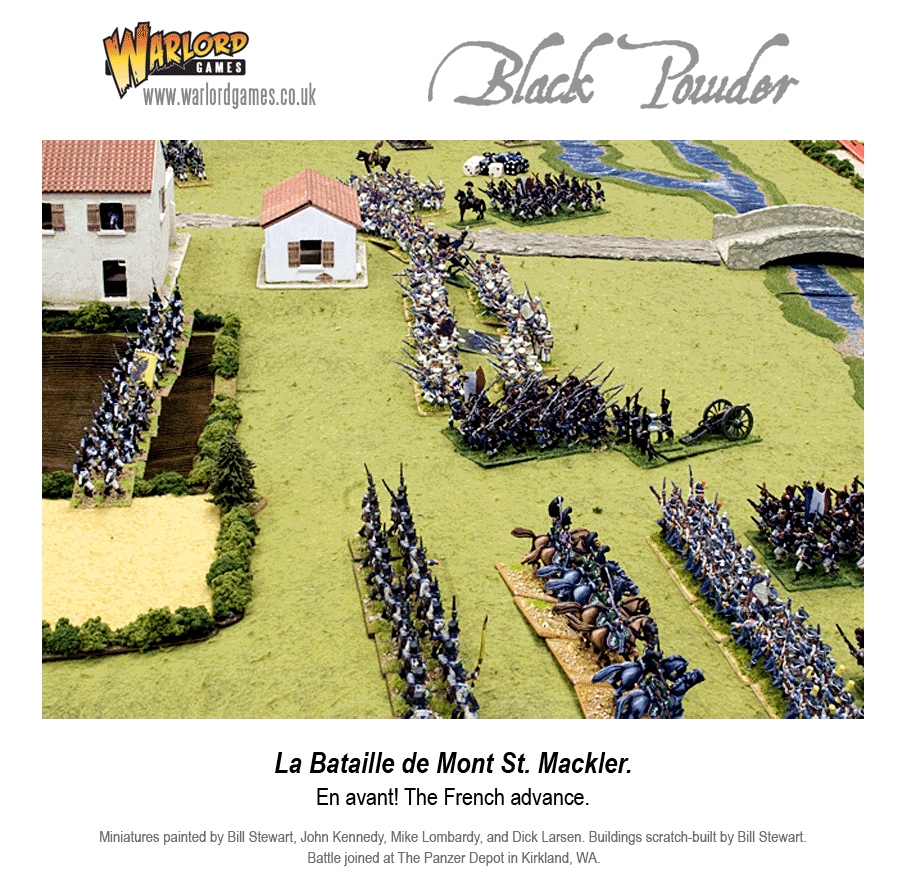 I formed my command into a fine example of ordre mixte with the guns limbered in the center and my cavalry on my left. My plan—and I had one—was to advance across the stream, sweep the Austrian verlorene haufe, commanded by Bill, from the small hill by the town, unlimber my battery there, and then support my further advance against the Austrians. 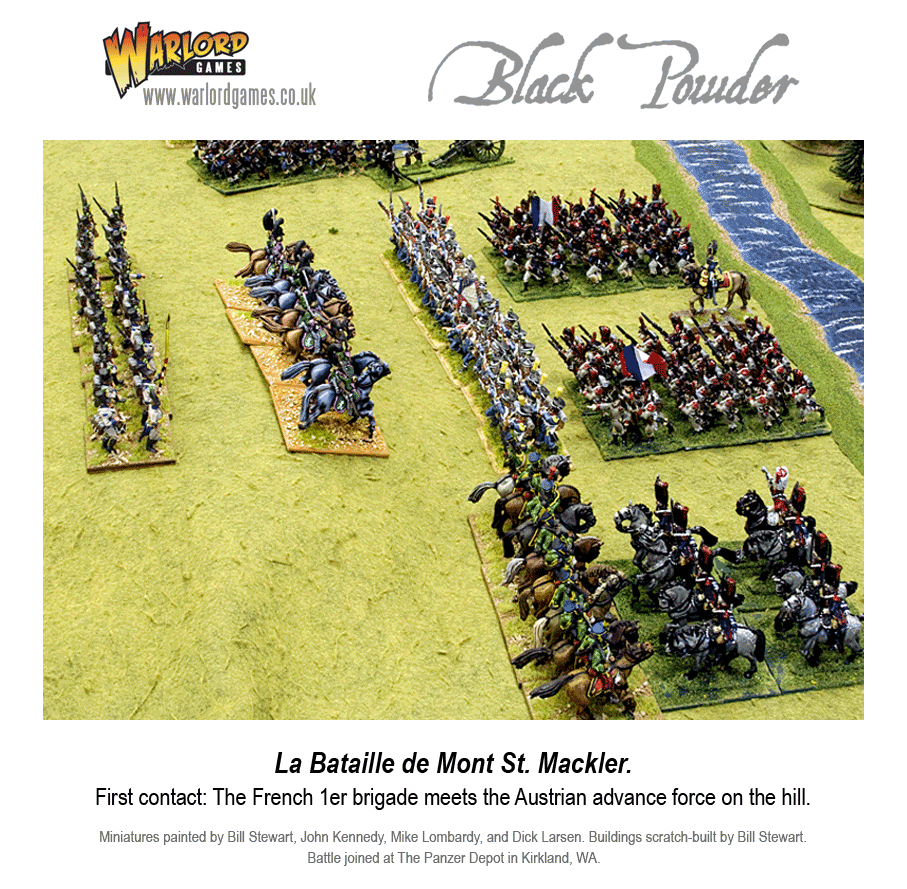 As I was fording the stream, Bill attempted to charge his cavalry at me, but he failed his command roll. Mike sent him another cavalry unit in support, which Bill deployed on his right. On my turn, I moved up to close range with Bill’s cavalry and shot them up with my légère, leaving them shaken and disordered. My cavalry charged into the cavalry on Bill’s right and beat them badly enough to allow me a post-mêlée sweeping advance, which I used to smack into Bill’s shaken cavalry in front of my légère.  That combat also swept away the other cavalry leaving Bill with only a militia battalion to hold the hill. 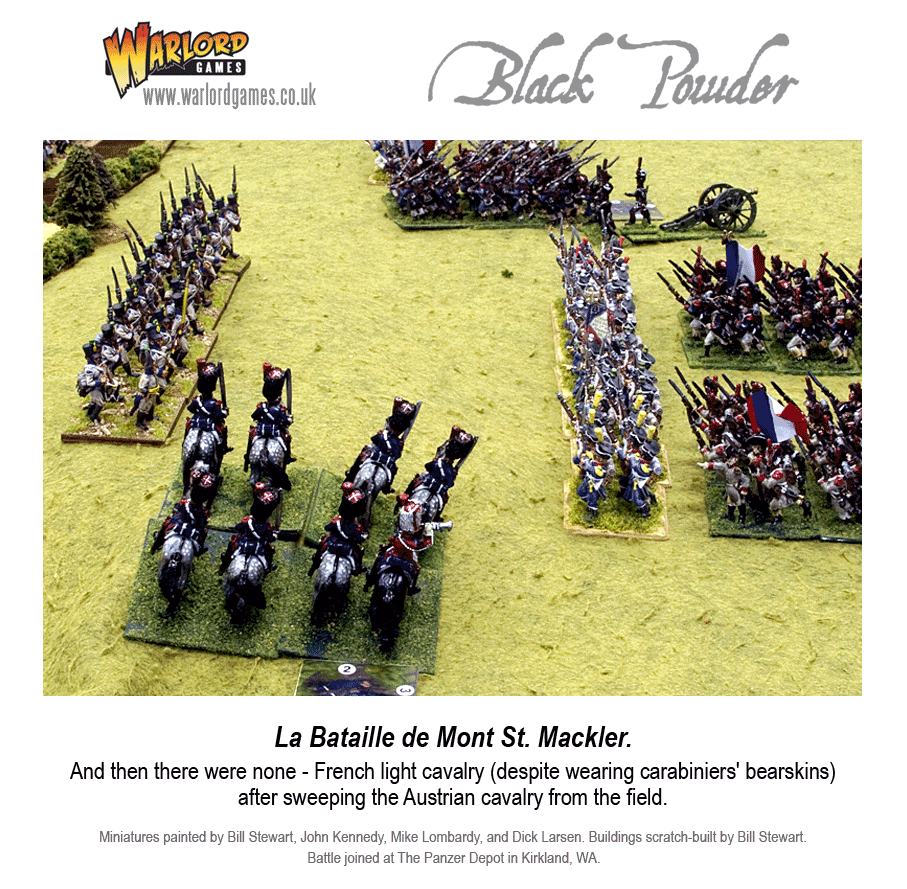 Meanwhile, Dick and Brett advanced their battalions towards the town, while Rich held the French right wing with two cavalry units against Bob’s advancing Cosaques. 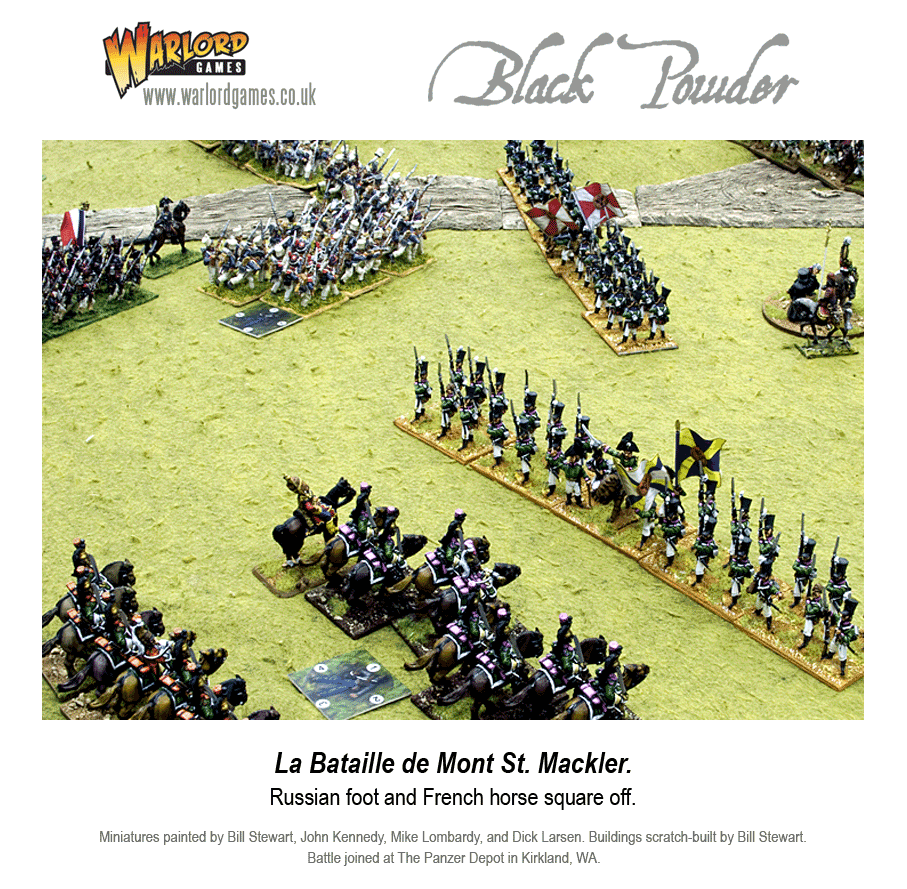 On the next Austro-Russian turn, Mike advanced his Austrian line battalions alongside the town, which he occupied with another battalion, and sent his battery and another militia unit up to support Bill. One of Mike’s BIG battalions used it’s first fire to get a debilitating five hits on Brett’s leading battalion. Unmasked by the rout of their cavalry, Bill’s Austrian militia shot my légère and disordered it. 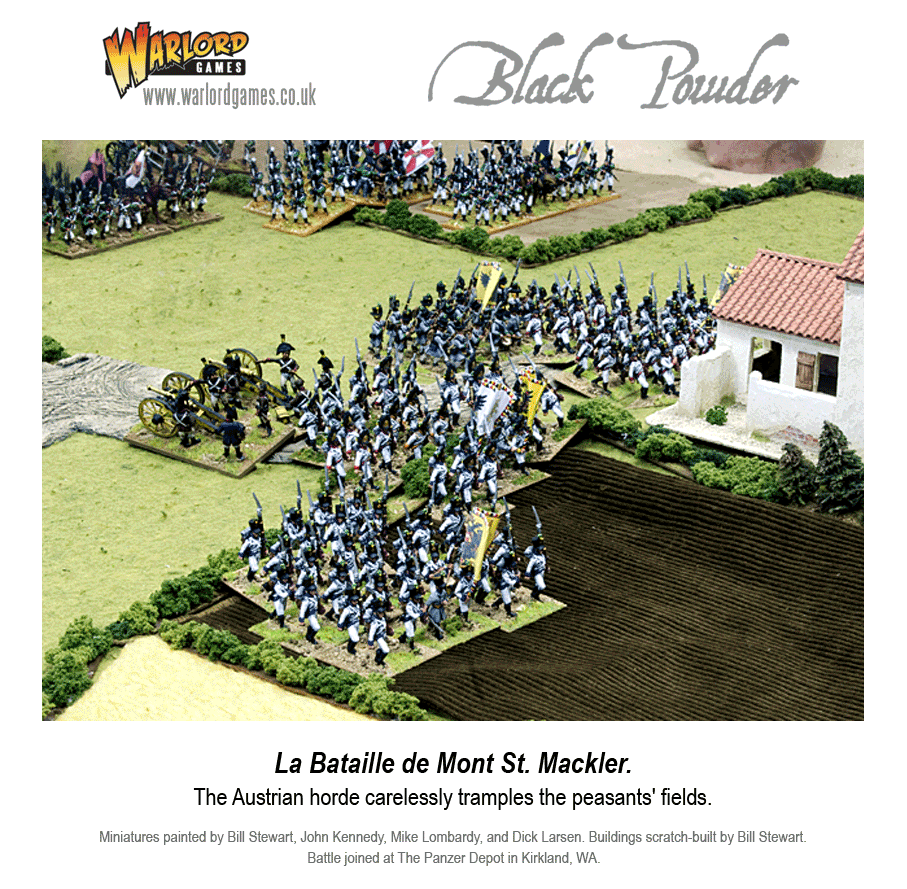 On my next turn, I charged my line and elite battalions in column of attack through the légère and into Bill’s militia, which broke. 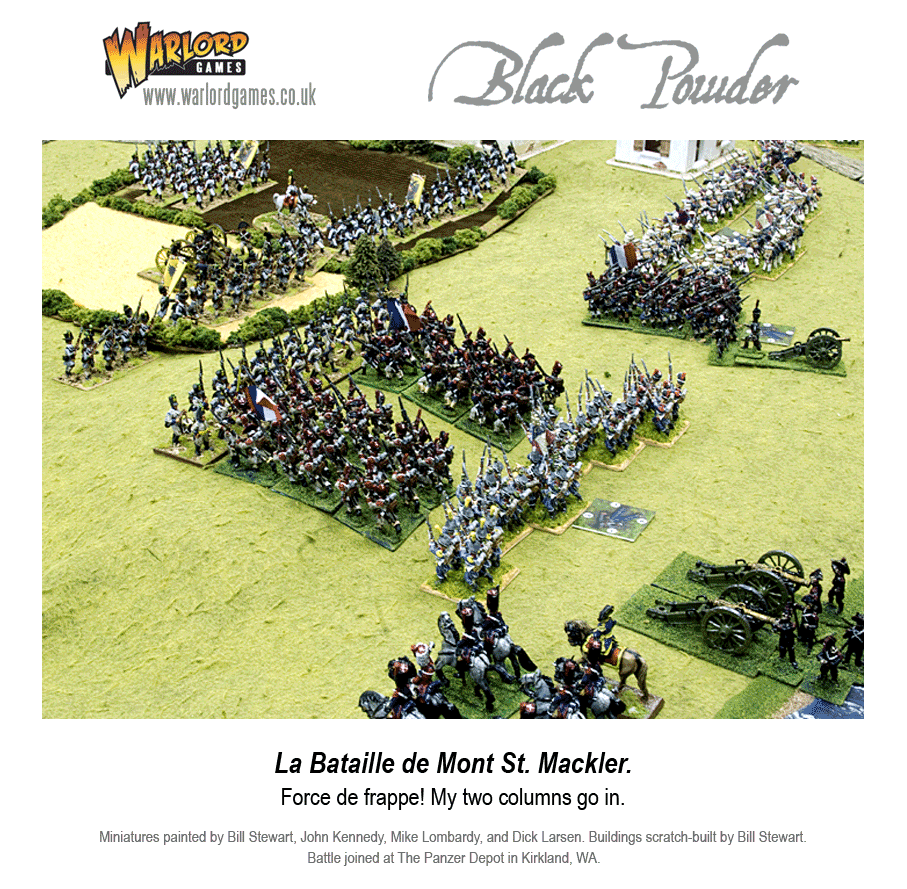 Brett advanced a battalion in line through his disordered lead battalion and smacked into Mike’s Austrians beside the town. But the Austrians held and sent the battalion back in disarray. 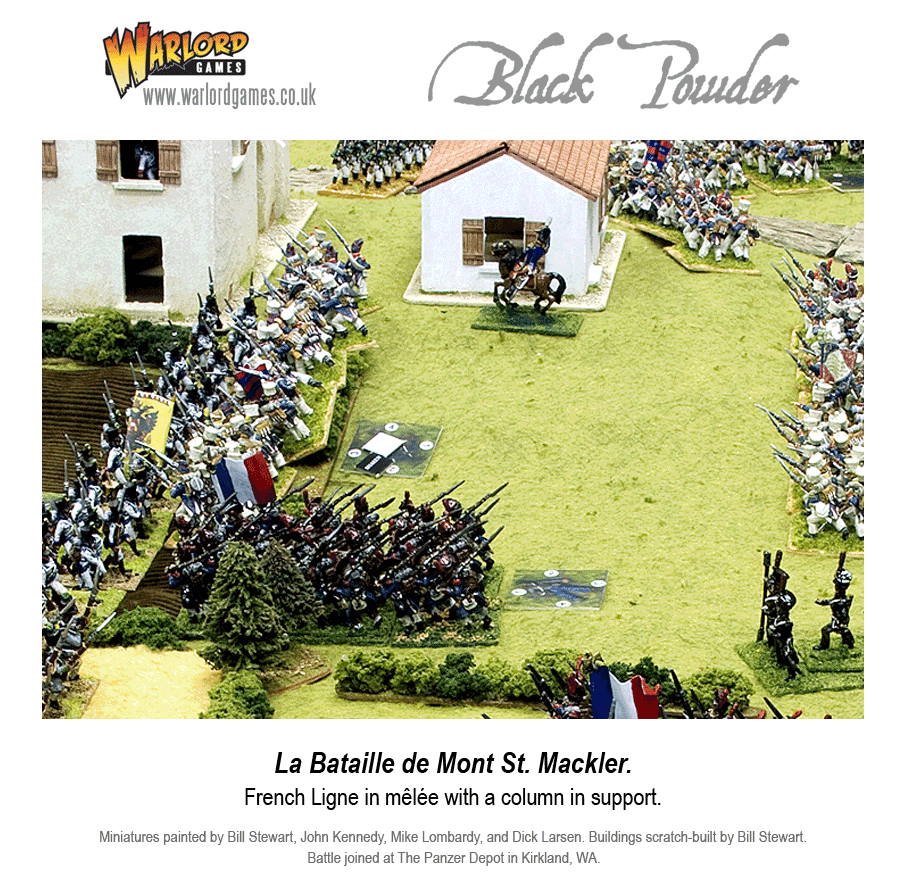 In the aftermath defeating the militia in front of me, I pushed forward the Français dans les bonnets à poils in hopes of further discomfiting les Autrichiens, which I did by beating the next militia unit in turn. 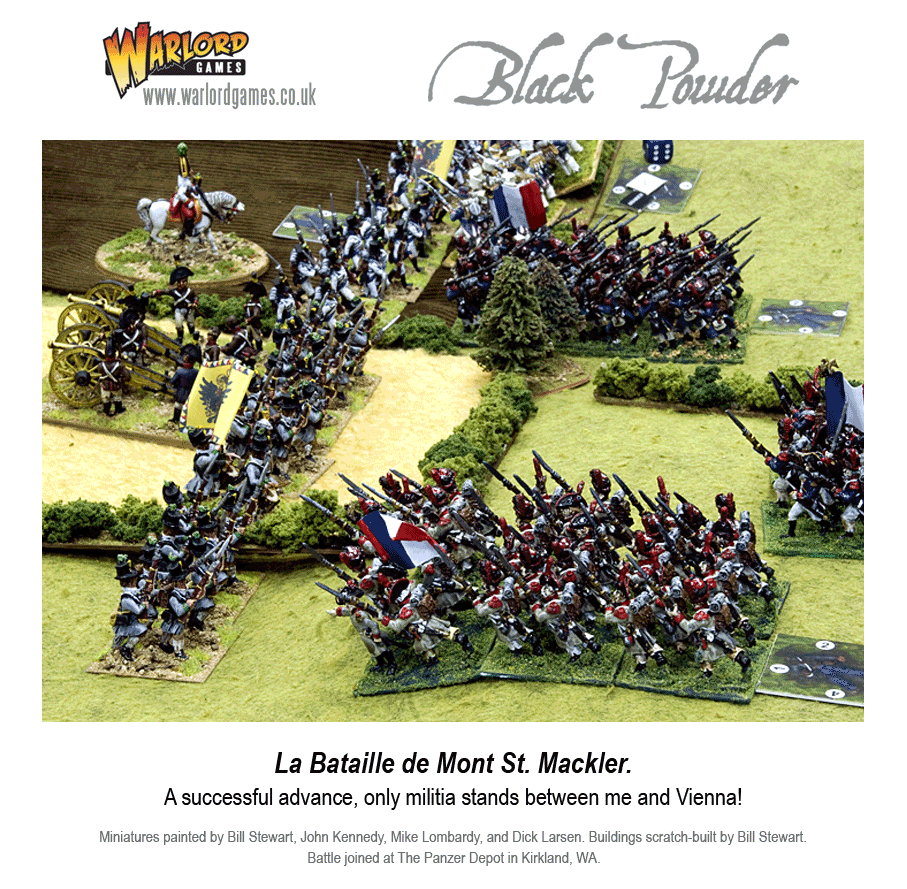 In the center, Bill and Brett continued to battle with the foe. Brett’s battalion in attack column, which had taken one hit from the mad monks of the monastery as it forded the stream, was been poised and ready to spring into the Austrian battalion to his front, but got forced back by a break test. Every turn thereafter he wound up being disordered by Austrian fire, which prevented him from giving the unit orders to charge in again. There it sat for the rest of the game, unable to retreat or advance due to persistent disorder. It did, however, manage a few lucky sixes when shooting its one die at Mike’s BIG battalion.

On my part of the field, the attacking battalions were getting a bit high on stamina hits. By chasing off the militia, my two columns had unmasked the Austrian battery, which proceeded to pour shot and shell at me until I formed line in order to fire back. 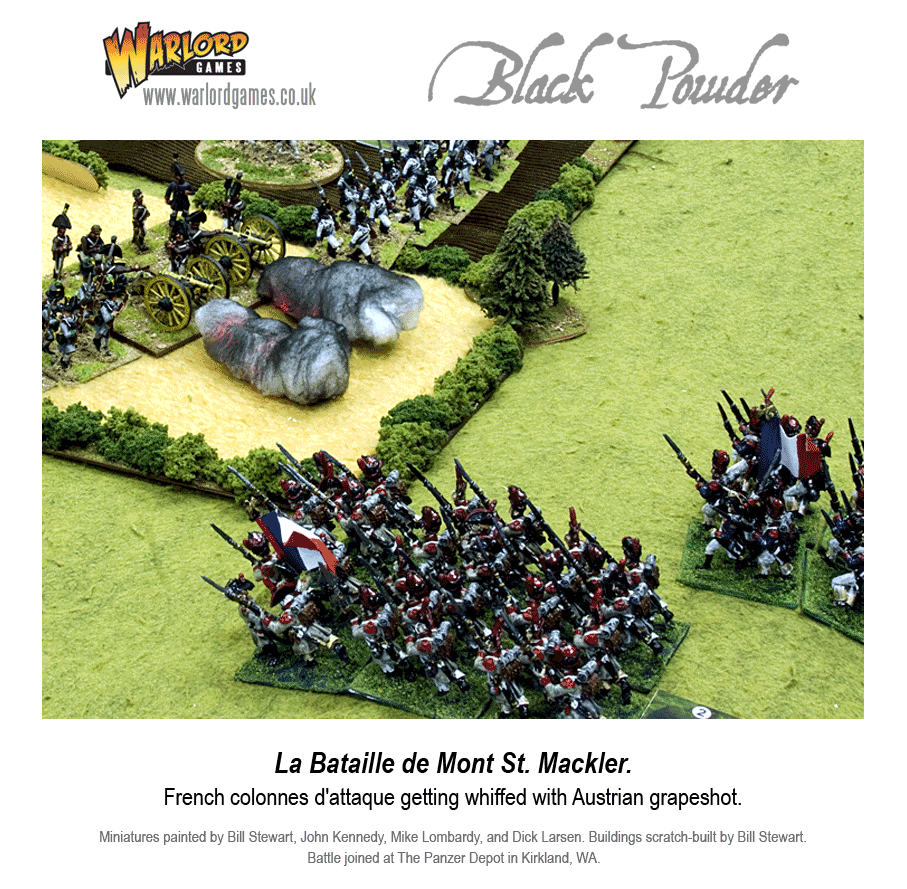 Rich withdrew his cavalry in the face of Bob’s advance, although he remained enough of a threat to make Bob form one of his battalions in square as a hedge against an attack on his flank. 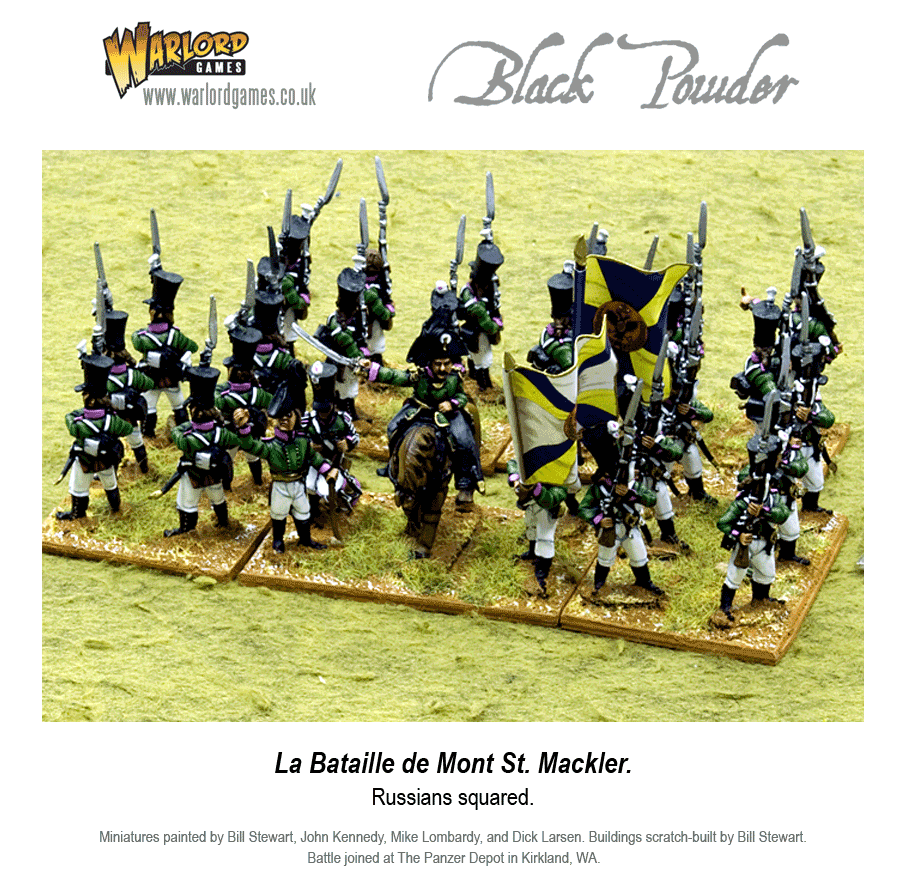 Bob threw his other battalions against Dick’s brigade and they mixed it up for several turns. At one point, the Fox of the Steppe made a successful flank attack with his cavalry against one of Dick’s battalions, which cause it to retire to lick its wounds. 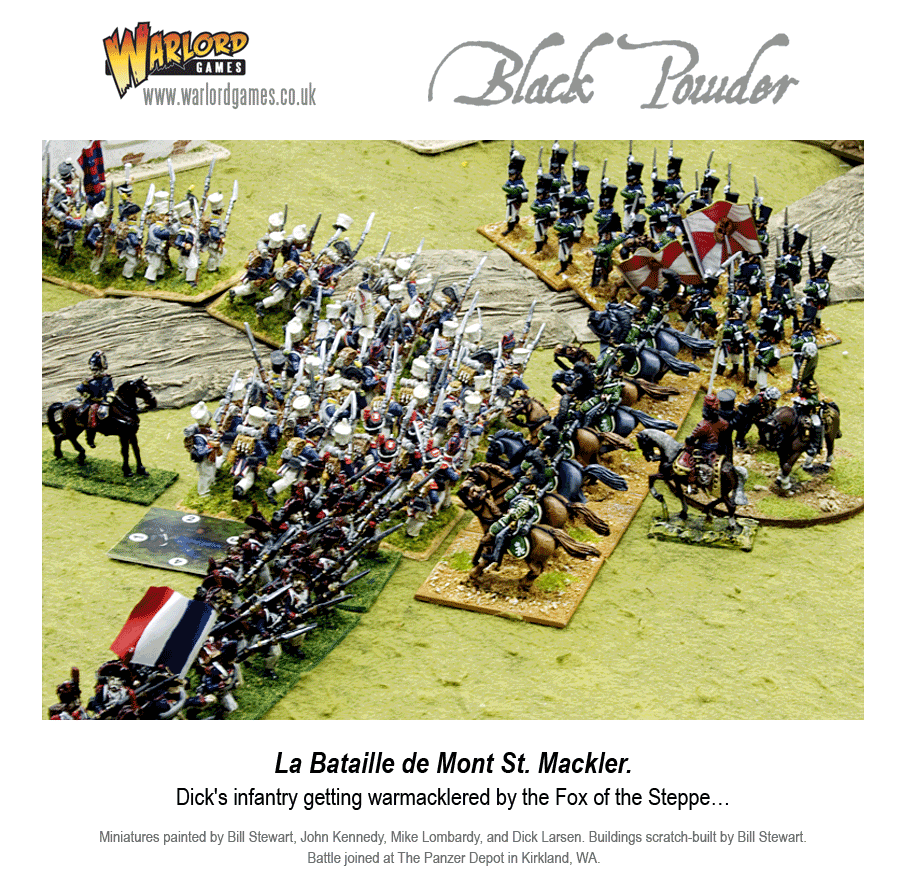 While I was trying to get my attack back on track, the mad monks came out of their monastery and started nipping at my rear echelon, namely, the guns. Still limbered and waiting their chance to form on the hill I had captured, they started taking lucky shots from the monks, who, though apparently armed only with scripture, were having an effect. I spent several turns unable to move the guns because they had been disordered. 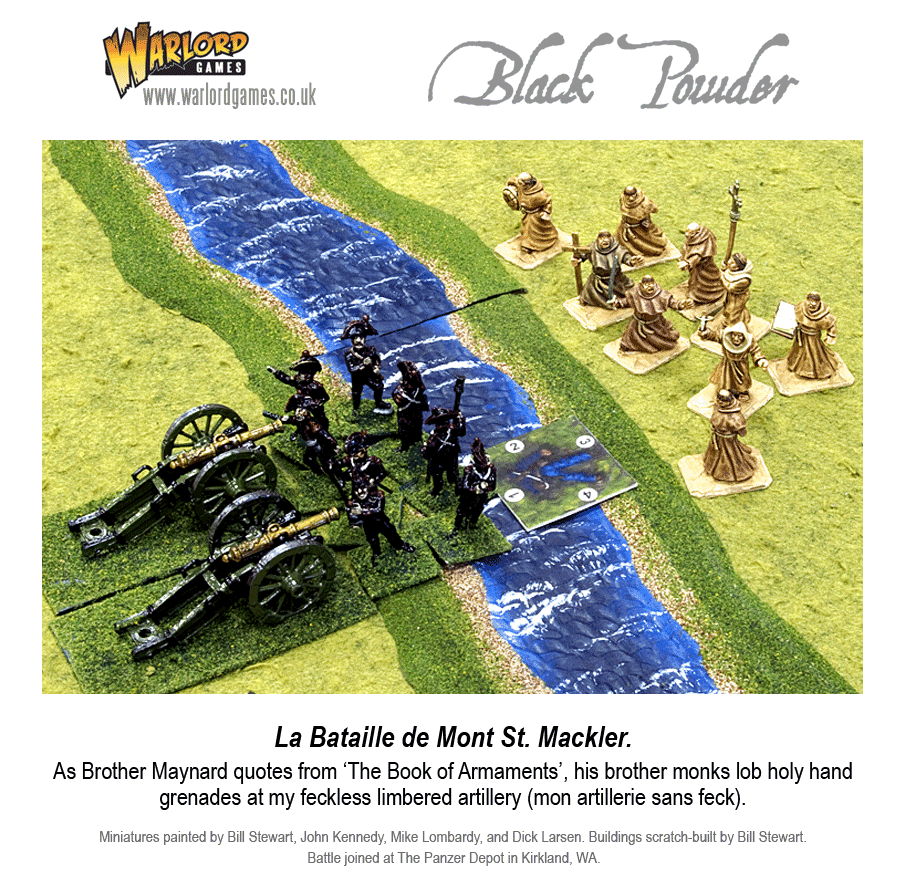 Also on my part of the field, Mike kept feeding Bill units to get killed, but the task was taking its toll on my battalions. The elite Français dans les bonnets à poils and the légère were shaken. I put all my battalions into line and started trading shots with the enemy. A telling fusilade from the Austrian line finally resulted in my severely failing a break test and the elites went away, but not without having covered themselves avec la gloire. Au revoir, bonnets à poils, au revoir mes enfants.

Still harassed by the mad monks, at one point, I attempted to move my cavalry around and chase them off. However, after being able to retreat the guns from the monks on an initiative move, I turned the cavalry back around to bring it into support of my remaining battalions.

I continued to trade fire with the enemy and eventually shot the Austrian 4-pounders into a shaken state and managed to keep them disordered as well. This consistent success in shooting, finally induced Bill to attempt to “cool” me by touching defiling my dice. It worked for one roll (against his guns), but my next shot at Mike’s troops resulted in three sixes. Maybe the dice work better after defilement. Brett and I were both shooting at Mike’s foremost battalion and even if BIG, we managed to keep it shaken and/or disordered by numerous hits—which kept Mike’s commander busy rallying it back from shaken status. 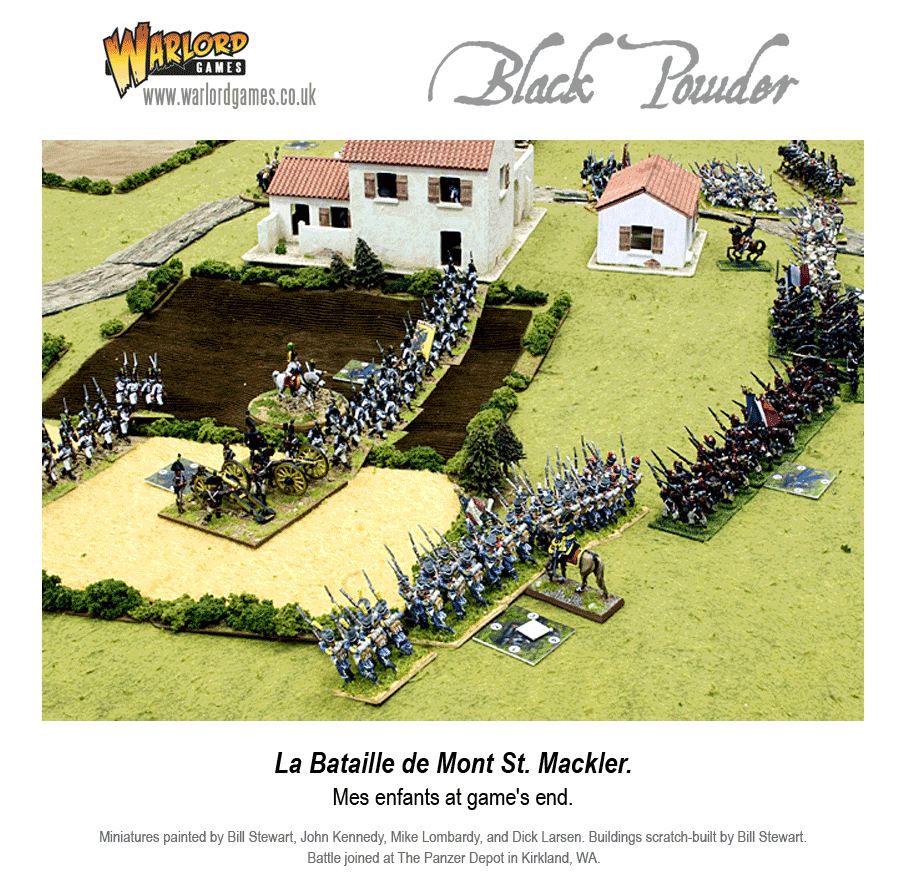 On the French right, Rich brought his squadrons into the fray, but was eventually forced back by Russian infantry, now commanded by John Kennedy while the Fox of the Steppe took a break. 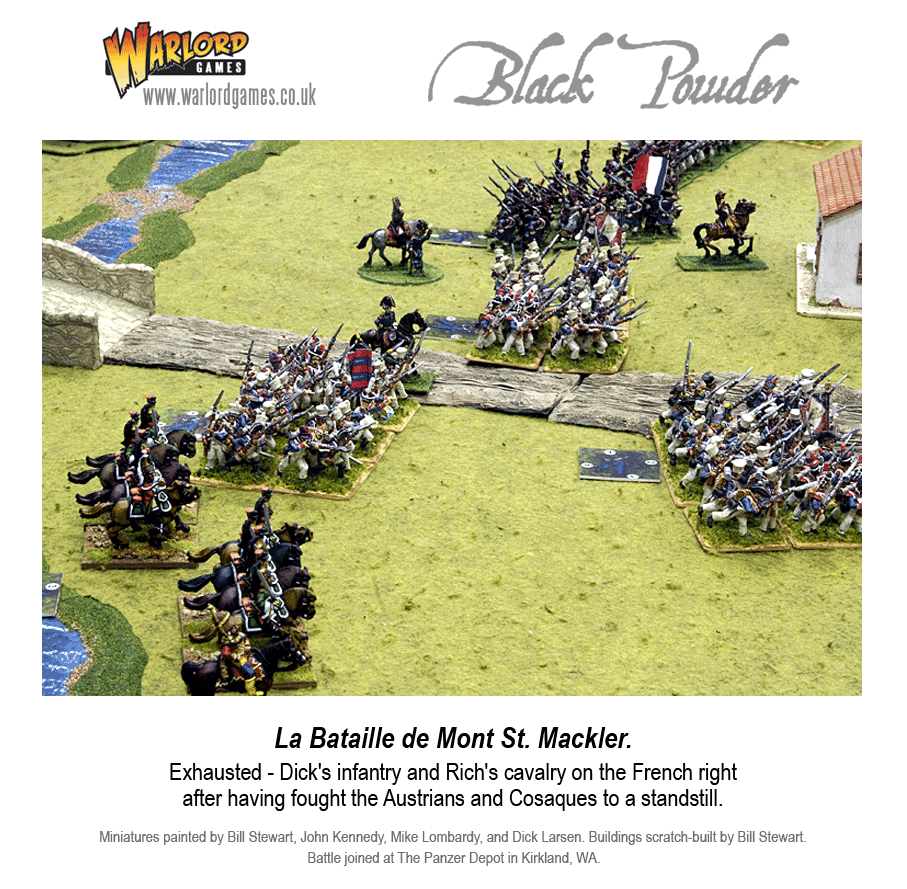 Finally, we called the game for the Austro-Russian side. They had taken and kept Mont St. Mackler and with many of our units shaken, we decided that the French had little hope of taking it themselves. I’d managed to take out five Austrian units, while losing only les bonnets à poils. My worst damage seemed to come from those unruly monks. We didn’t take the town, but we had the monastery and would soon set ourselves to punishing those contumacious monks. 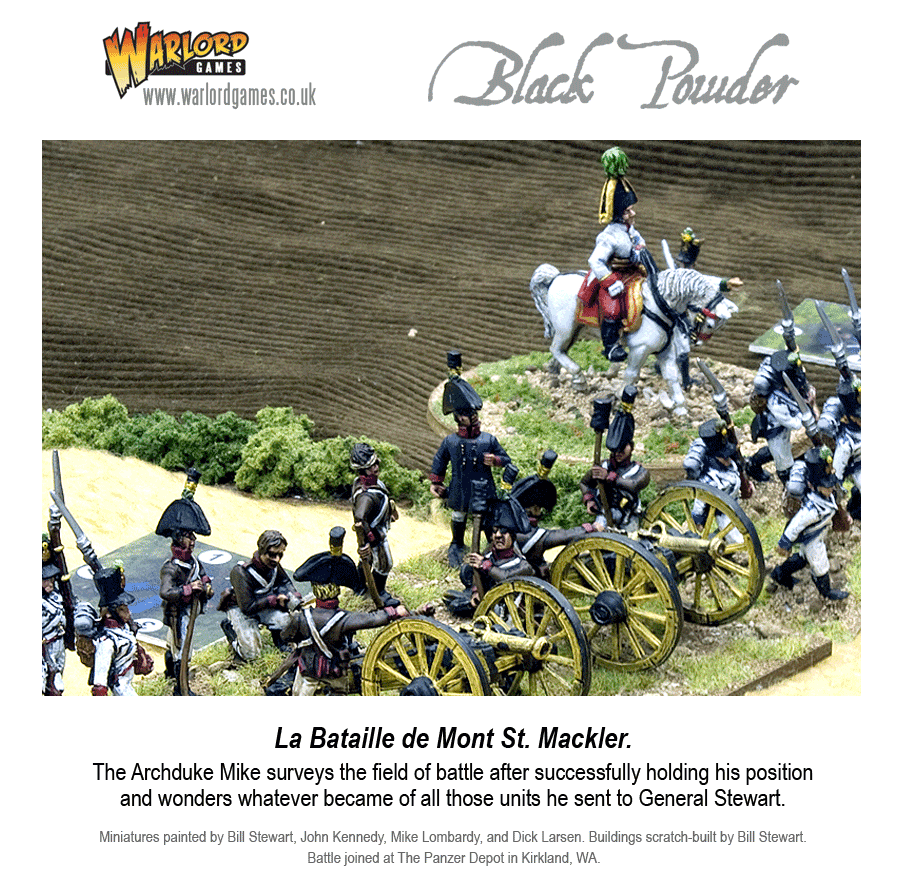 My second game with Black Powder went very smoothly. I mostly knew the rules by then and the turns played quickly, despite the large number of units on the board.

One thing I noticed is that elite units are just OK, if that. Their one advantage is being able to roll off disorder at the start of their turn, which enables them to take initiative or receive orders instead of sitting around—if they pass the test. On the other hand, the BIG battalions of the Austrians got +1 dice on shooting and +2 dice in hand to hand combat, much more tangible benefits just from being bigger, not necessarily better. My Français dans les bonnets à poils succeeded because I rolled good dice (until Bill defiled them), not because the unit had significant intrinsic advantages as an elite (I was never disordered, so the unit’s one advantage was moot.) The militia units I fought were just as good as I was at shooting, hand to hand, stamina, and break tests.

However, as one reviewer wrote of Black Powder, you have to see the rules more as a toolkit of game mechanics that you can use to build different unit characteristics. It’s this ability to customize that enables the kind of chrome that makes games more interesting. So, we might have made militia units a minus at one or more of the characteristics that define a unit’s abilities. For example, they might have been stamina 2 instead of 3 or fought hand to hand with -1 or -2 dice. Or, the elites could have had stamina 4 and/or fought hand to hand with +2 dice.

After two games, I am very happy with the rules and look forward to more…