We’re well known for our historical miniatures but we also sell Mantic Games’ fantasy miniatures. For those of you so inclined (and why wouldn’t you be?) we’ve got a bunch of new Mantic releases to satisfy you! Don’t dither though – the new Undead Army set is in high demand…

All good armies are lead by the best generals and his trusted Lieutenants. The Dwarf King’s Counsel set contains the Dwarven King, his Army Standard Bearer, a Berserker Lord and a Warsmith.  This set contains 4 metal sculpts – we consider these models to be the best Dwarfs we’ve seen . Ever.

Of all of the Dwarfs, none fight with more frenzy or gusto than a Dwarf worked into a berserker rage. This premium metal kit contains 5 Dwarfen Berserker figures armed with axes and a complete command group. 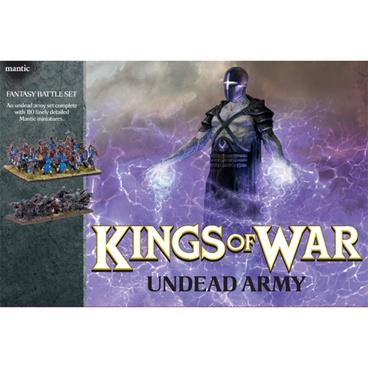 Leading an Undead army into battle is one of the most dramatic scenes on any fantasy battle table – and one of the hardest armies to beat in a battle – and it’s now available at incredible value. All the models in The Undead Army Set are hand sculpted, and made in hard plastic for the best finish. It contains 110 figures, including: 2 Skeleton regiments; an armoured Skeleton Regiment; 20 ghouls and 30 new Zombies. The easiest, cheapest way to a complete Undead army!

Also included within the set is a ruleset written by the world-famous Alessio Cavatore that will let you start playing games immediately.

If you are an evil necromancer, or Vampire Lord, you just can’t get enough of Zombies – until now that is! This Zombie Regiment comes with 30 plastic Zombies, head swaps and conversion parts. The highly detailed  sculpts will form up into large regiments for your fantasy battle game, and offer great additions to all board games and RPG’s.

A truly huge set of Zombies! The Undead Zombie Horde! In fact enough zombie models to build your own horde – in one easy purchase. The set of 60 pose-able plastic models comes with lots of conversion parts, and includes sprues letting you make figures with just shambling legs, and others dragging themselves across the ground – ideal ways to add Zombie-esque character to your Undead army, or board game.