From EN Publishing, welcome to the worlds of 2000 AD! Voyage into the far future in this versatile tabletop RPG of science fiction adventure.

Mutant bounty hunters hunt down the scum of the universe. The noble houses of a resurgent imperial Russia use every means at their disposal to attempt to become the supreme power; using bribery, assassination, espionage, diplomacy and war. The solar system is invaded by the Geeks – a hostile alien race hell-bent on the destruction of mankind, on Earth and her colonies in the solar system. Criminal hitmen fulfil their contracts, blasting their way though rivals and bodyguards to achieve their bloody payday. Occult investigators hunt down demons and restless spirits threatening both the lives and souls of the people of Britain.

And then there is Dredd. The top lawman in a vast city over 800 million citizens he contends with criminals, mutant raiders, aliens, rogue robots and enemy agents from other, hostile, megacities.

This roleplaying game provides the core rules for the science fiction worlds of 2000 AD. It also provides in-depth material allowing you to create and run adventures in the world of Judge Dredd. 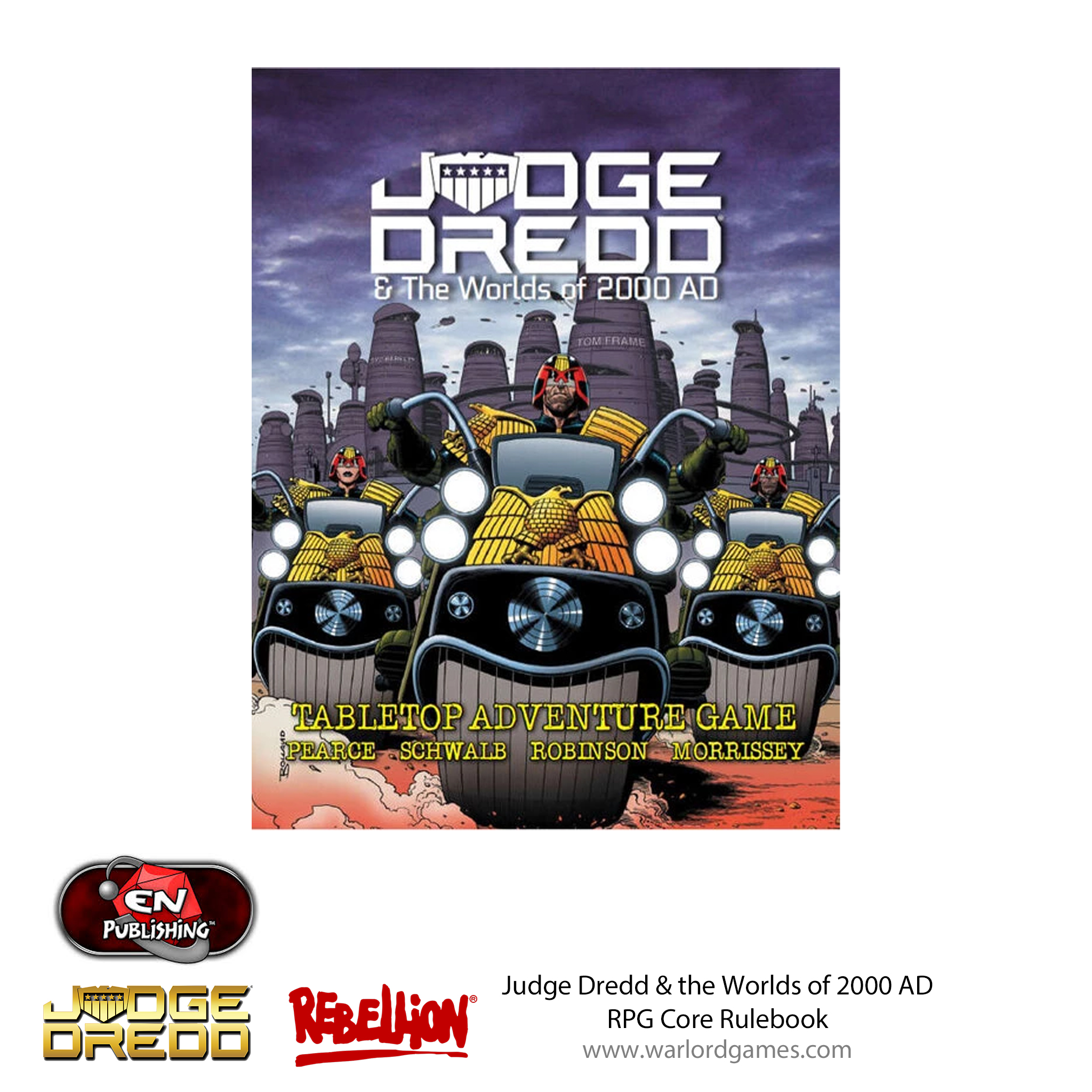 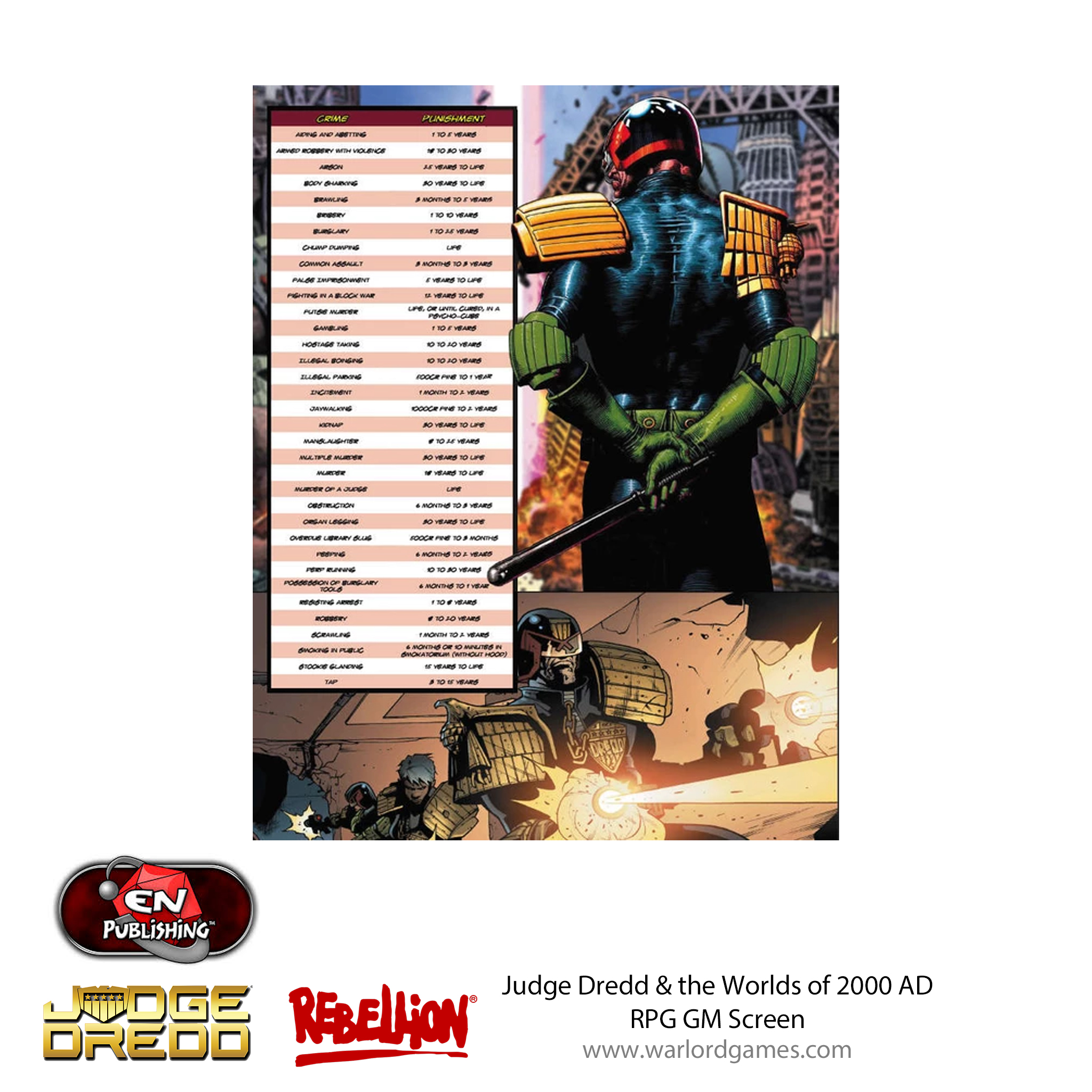 Nearly 100 cardstock counters for use with the Judge Dredd & The Worlds of 2000 AD tabletop RPG, including villains and foes from the core rulebook and from The Robot Wars. 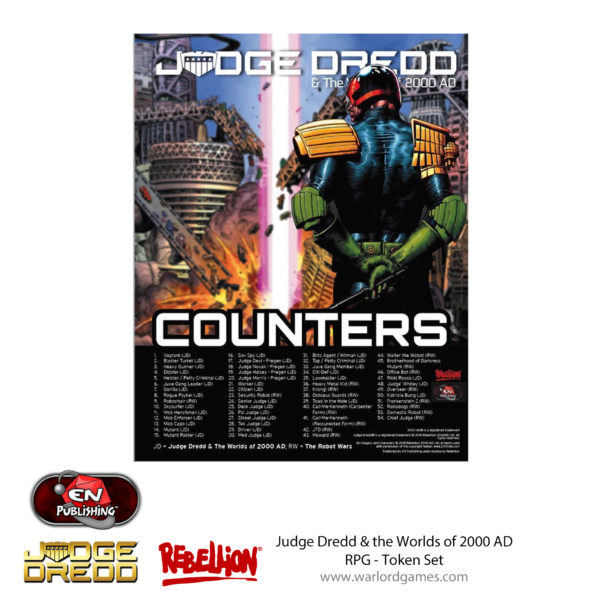 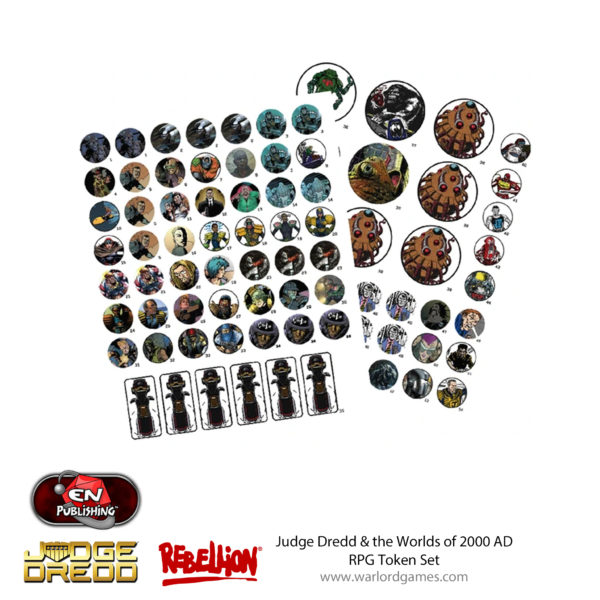 Also available are a series of adventure sourcebooks giving players and Game Masters the opportunity to play through the story arcs that made Judge Dredd such an enduring character. The following supplements require the use of the Worlds of 2000AD core rulebook:

THE ROBOTS ARE REVOLTING!

All across Mega-City One, the Robots are turning against their human masters. Chaos reigns as the charismatic Robot leader, Call-Me-Kenneth, rallies the city’s Robots to his side, and only the Judges stand in their way.

Play as Judges in The Robot Wars, or as Civilians and Perps in Saving Matt Damon Block, as war rages across the embattled city.

With expanded rules for Robot characters, in-depth discussion of Robots’ role in society, and summaries of Dredd’s earliest case files, this supplement is an essential addition to the Judge Dredd & The Worlds of 2000 AD roleplaying game. 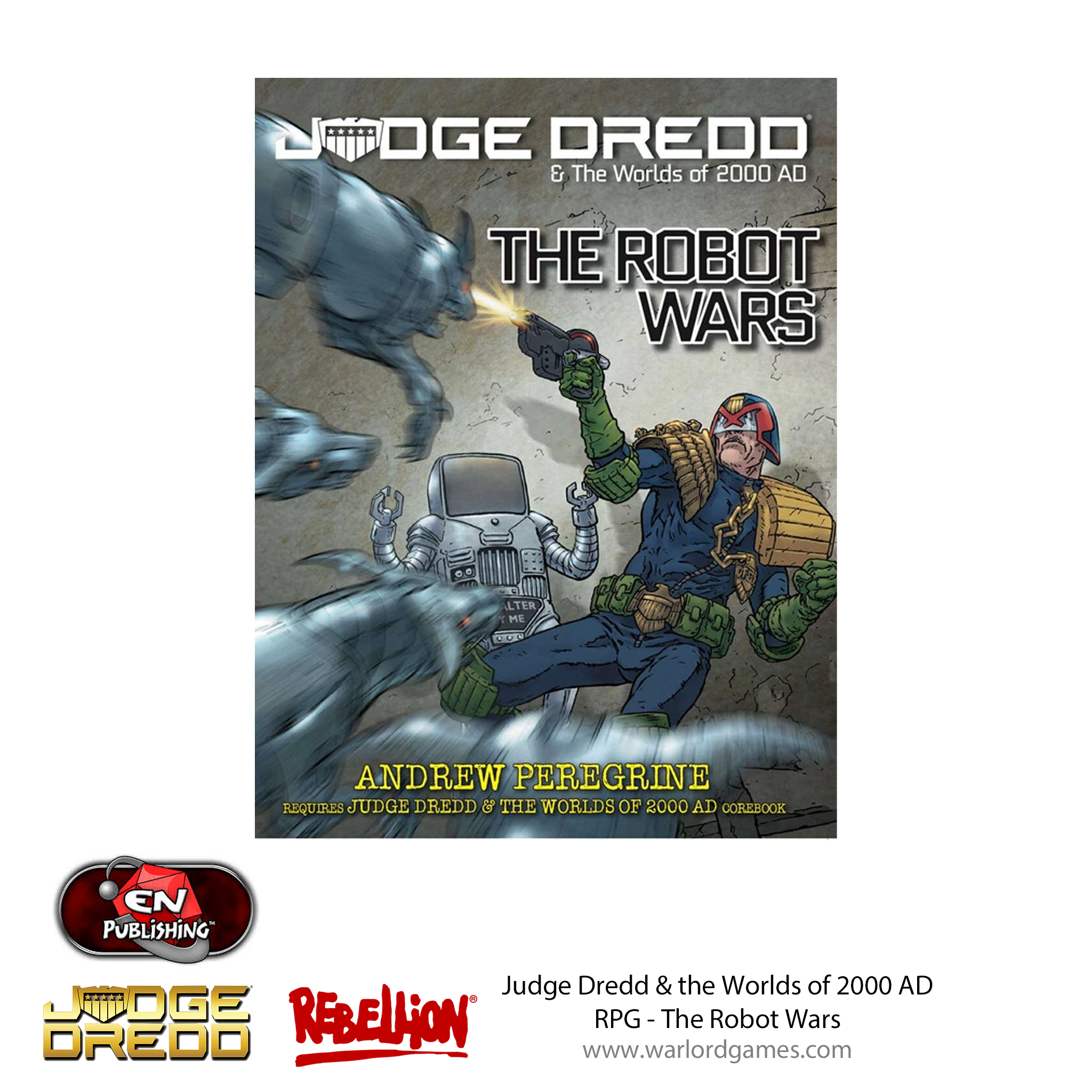 ON THE LUNA FRONTIER ONLY THE STRONG SURVIVE!

Judge Dredd’s world extends beyond the borders of Mega-City One. The Moon provides new challenges to Judges, Perps and Citizens who choose to escape the claustrophobic cityblocks and make a life for themselves… amidst the oxygen-short, crowded and lawless expanse of the Luna-1 colony.

Get assigned to the moon to keep the peace as Judges in the Luna Marshal campaign, or deal with a criminal gang in the frontier town of Grey Rock as Civilians and Perps in Sundance Rising.

With expanded rules for Luna characters, new Judge careers including the Luna Judge, Zero Squad, and non-Judge careers such as the Loonie Cultist and Gunslinger, in-depth descriptions of Luna-1 and the surrounding areas, as well as the Titan penal colony, and summaries of more of Dredd’s early case files, this supplement is an essential addition to the Judge Dredd & The Worlds of 2000 AD roleplaying game. 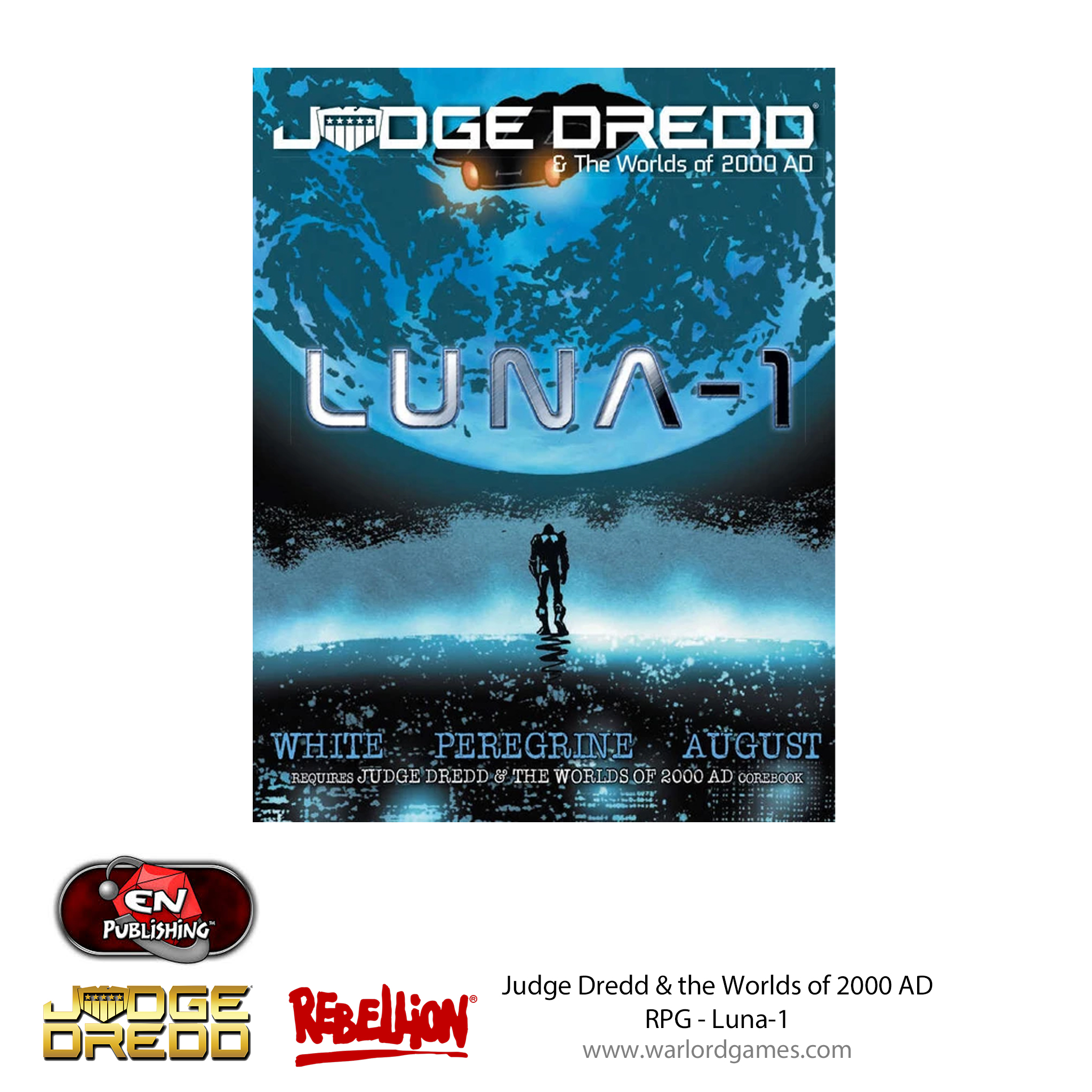 CAN YOU CROSS THE CURSED EARTH AND SURVIVE?

The Cursed Earth is a vast, radioactive wasteland filled with mutants, outlaws, and more.

Whether you’re undertaking a desperate raid outside the borders of Mega-City One, or you’re a Mutant trying to eke out a life in the blasted wasteland, the Cursed Earth provides endless opportunities for adventure.

Within you’ll find 10 new mutant species including the Alabammy Blimp, Brotherhood of Darkness, Dog Soldier, Gila Munja, Kentucky Trog and more, plus expanded mutation tables which include animal mutations, corporeal mutations, and metaphysical mutations. You’ll also find a wide range of new mutant careers, equipment, a gazeteer, and a full adventure which takes you on an epic trek across the Cursed Earth as you deperately try to deliver a vital antidote to Mega-City Two!

An essential book for those playing mutant characters or those venturing out into The Cursed Earth! 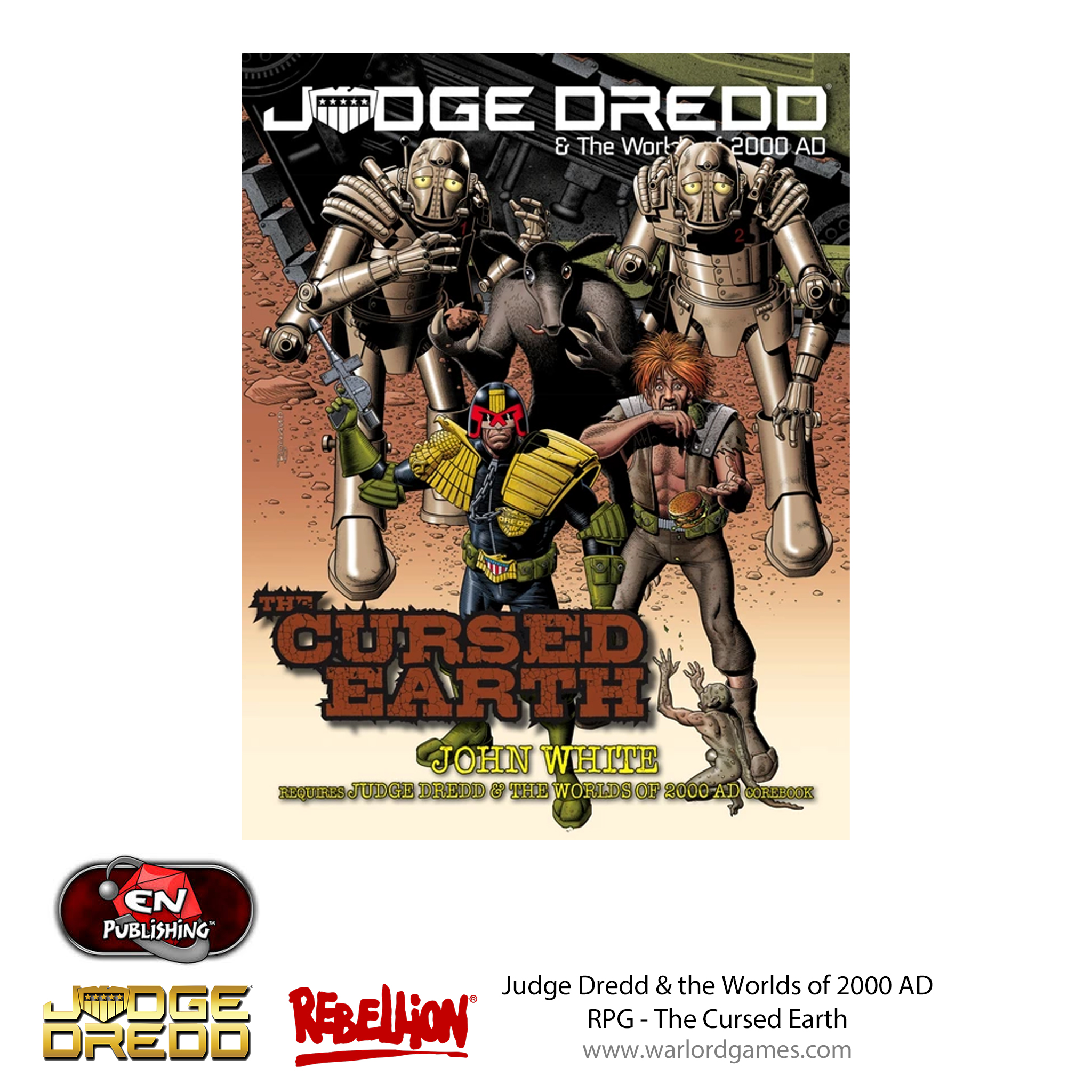