Algoryn, Beyond the Gates of Antares, Gaming & Collecting, Ghar, Tactics

It can sometimes take a while to acclimatise to a new game – and one of the questions we see amongst the community quite regularly is that of tactics… how exactly do you go-about tackling the tough Battle Suits of the Ghar Empire?

Luckily, Tim Bancroft… (or should that be ‘Training Sergeant Tar Romal’?)… has a few words of wisdom to share – which might just save your life when facing those dreaded Battle Suits… so listen up, recruit! 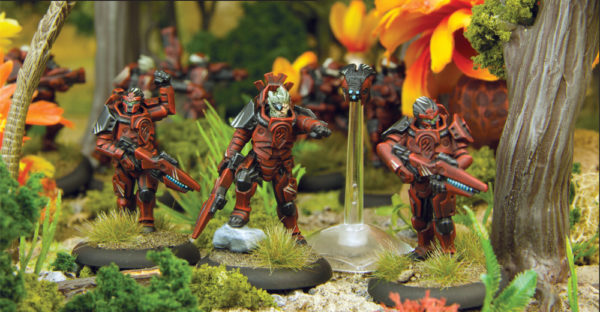 ‘Speak up, Recruit Jayna: I thought you said a Mag Gun. No? Good, because this is your best friend, a AI-16 Mag Repeater, one of the most effective weapons we have on the battlefield. It’s… what is it Optimate Recruit Mar Es Jan? No, the AI-16 is not as high-tech as your Concord plasma carbine and the reason is simple, but perhaps you can explain that to us, Recruit?

‘You can’t? Then drop and do 10. Now. Whilst I talk. The reason the AI-16 is so effective is that it is far more robust than the plasma carbine. Sure, the carbines have a bit more stopping power in single-shot mode but that means virtually nothing against the Ghar. At assault weapon ranges the repeater is just as effective as any plasma carbine.

‘So, how many of these does it take to shoot down a Ghar in a suit? Very funny, Recruit Bitrek – when did you last see a Ghar at a ball? Drop 10.

‘It takes one to kill a Ghar, just one.

‘Don’t look surprised. Sure, the Ghar have enough armour on those suits to cover a tank – almost as tough as a Liberator – but they have weak points, notably the plasma reactor cooling intakes. Experience has taught us where to hit ‘em and I ask you politely to refer to diagram one and memorise the weak points on a suit. You will be tested later, believe me, and you will want to remember.

‘The fact is, only about 50% of any firestream will hit a suit on the battlefield – and that’s at close range. Most of those that hit will either be dodged, perhaps, or will bounce off the armour or will cause minimal damage

‘Of those firestreams that hit, only about 10% will cause damage enough to bring a ball down. Yes, just 10%. Are you interrupting again, Jayna? Are we a weapon statistics graduate are we? Right. Fair enough, that I forgot. Listen up everyone, Recruit Jayna is going to tell us a bit more about the statistics of warfare against the Ghar.

‘May the gods of Obureg help you all. Recruit – begin.’

+++++ Voice 2: ‘Thank you, sir. A squad of troopers at effective range firing on full auto mode might land 5 or 6 shots against a squad of balls, sir, excluding targeter help. The Ghar squad leaders are tough, both good at avoidance and carrying better armour, making it likely that only around 2% of our firestreams will be effective in taking them down. The ball squaddies are a different matter, with a 19% chance of a pair of hits taking out one suit, perhaps a third of the time taking out both.’

+++++ Voice 2: ‘Well sir, given a 10% chance per shot, it means they’ll cause minimal damage 90% of the time. For the Ghar’s protection and avoidance tactics and to be effective against both at once, that’s 90% times 90%, giving an 81% chance of nullifying both shots. For two balls defending against all four firestreams levelled against them, it comes down to about two thirds.
With targeters, of course, we stand a greater chance of hitting in the first place.’

+++++ Voice 1: ‘So with the shots on their squad leader, it means our team of mag repeaters have just about one chance in three of taking out a ball. I guess I have to thank you, Recruit. Drop and 10 for interrupting; accept a commendation for actually researching what a trooper needs to know.

‘What this means, apes, is that a single squad is far more effective than an individual. Don’t be afraid to lay down fire against the balls with your team mates. If you can coordinate with other squads, you can take out those Ghar-balls real quick. But don’t forget to wait for targeters and don’t hesitate to use spotter data. If the damned Ghar want to protect themselves and hit the dirt, then fine – they ain’t shooting back.

‘And if they ain’t shooting back, we’re safe.’

‘Now, as to those vulnerable points…’

Tim Bancroft – has been hugely active amidst the Antares universe since it’s inception, and has sent in a number of pieces. We have previously shared a number of Tim’s stories – which can be found here:

Algoryn99 Battle for Xilos39 Beyond the Gates of Antares594 Ghar62 Tactics20