Lone Star Historical Miniatures (LSHM) annual gaming convention, MillenniumCon, will be held for the 19th straight year on 11-13 November 2016 in Round Rock,Texas.

Hosting or supporting a vast array of events including:

Not to mention all the great tournaments and 90 game events! So come on down and pay us a visit and see some stunning inspirational armies at one of the best world wide events:

For a list of current games running at MillenniumCon, go to http://millenniumcon.conreg.net/reg/AllEvents.asp

This year’s MillenniumCon theme is a reflection of the anniversary of the Battle of the Somme in the First World War.

One hundred years ago in 1916, the British and French launched a joint offensive designed like all offensives to be a decisive event in the war. On the first day of the offensive on July 1, 1916 the British lost over 57,000 men. By the end of the campaign in November 1916, at least one million British, French and German soldiers were dead in the mud and the war was still a stalemate. These men entered the battle out of a sense of duty, honor or perhaps determination. They marched into the glory every soldier earns in battle, but like so many actions in history, their glory was ultimately hopeless. It did not resolve a conflict or bring peace closer, but they did their duty nonetheless.

This year MillenniumCon GMs are invited to find and present a battle in which soldiers fought fiercely and bravely for a great cause only to find their end without a decisive moment.

MillenniumCon 19 has big plans to take advantage of the holiday weekend (Friday the 11th is Veterans day). We decided to expand the hours and make Friday a full convention day.

MillenniumCon will be hosting several championship tournaments for friendly competition and an opportunity to improve your state or national rankings. All tournaments require a Three-Day or Single-Day convention pass to participate.

Tournament players should contact the tournament coordinator prior to the events. For all the details concerning tournaments, please go to the Tournaments page. 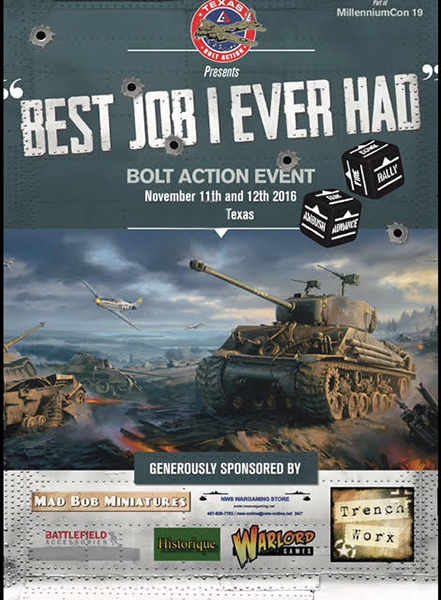 Come on in and join Casey, Jon, Tony, Charlie, Jeff, Blake & Oscar and all the others form Texas Bolt Action at Round Rock, Texas this weekend!

Pre-registration has closed – Registration and game signup will be available at the convention door.

Registration: You may sign up for this tournament during online registration or in person at the convention.

Texas Bolt Action proudly presents a new type of team event “Generals”. Axis and Allied teams will be pitted against each other on a range of tables where each one will influence the events of the day. Each team will have a General assigning reinforcements and leading their teams to victory. Bolt Action Version 2 rules will be used.

Best Job I ever had!…Players will field 1500pt armor platoons against each other in a battle of wits, tactics, and lucky dice! Bolt Action Version 2 Rules will be used. Pre-registered players will be emailed player packets and additional information once registered.

What kind of convention is MillenniumCon?

MillenniumCon 19 is a three day convention that supports Tabletop Wargaming with Historical Miniatures. We provide a unique event to celebrate our passion for playing wargames, crafting the miniatures and terrain used in these games, and researching the historical events that inspire our imagination. While we do focus on games involving historical time periods, our convention caters to many different gaming tastes and styles.

Unlike other conventions that support multiple genres, we don’t have one group trying to be all things to all people. There are also a limited number of RPG games but the emphasis is on miniatures games. Because of our focus on miniatures, we are proud to call Millennium 19 the largest miniature convention in Texas.