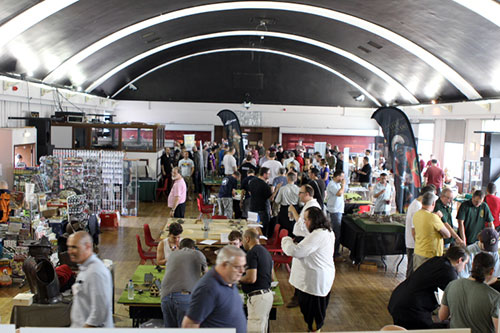 Bolt Action tournaments have been growing phenomenally in the three years since the game was first published. Every weekend there is an event somewhere in the world. Some of them having to put a cap of fifty entrants due to demand! This year we are going to be looking more closely at tying a number of the bigger UK and US events together under a NATIONALS title.

In America Jon Russell is shepherding a number of events towards a huge end of year event at ADEPTICON in Chicago – March 2016.

In the UK these will include the Welsh Open, Derby Worlds, Afterbolt and more. Culminating in an end of year awards ceremony at Britcon, Manchester in August 2016. It is important to note that this isn’t a finals day, but more of a round-up of the year’s events.

With all this planned for the next 12 months we will be working with Gary and Colin Betts of the BHGS group to make sure we can record the results and run some awesome tournaments themselves. Gary and Colin between them have over 20 years experience running tournaments and more terrain than anyone should rightfully have!

It would be remiss of me to agree to all this without playing in at least some of their events. I had already played in the Afterbolt tournament earlier in the year and done fairly well with an all infantry Japanese list. This time however, with very little time to find out who had borrowed my figures this week, I asked Gary to set me up with a random force. He chose Polish, a force I had never faced let alone played with… 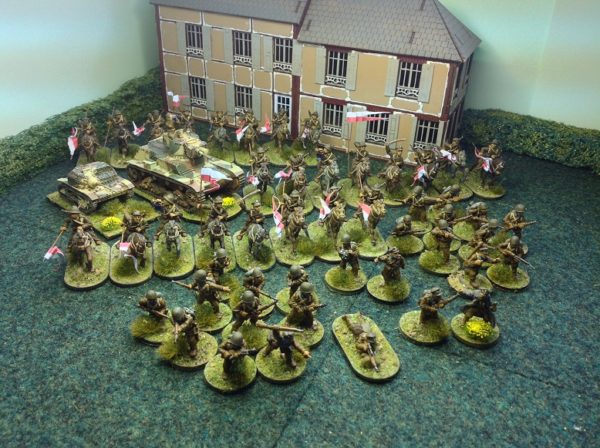 The Britcon tournament pack uses 3 different lists 750, 1000 and 1250. They can be from the regular selectors or tank platoons. This would give everybody the headache of not knowing exactly what army they were going to face or indeed use each round. Combine that with the fact that each of the amazingly laid out and themed tables had a different scenario on made it a very unpredictable set of games! 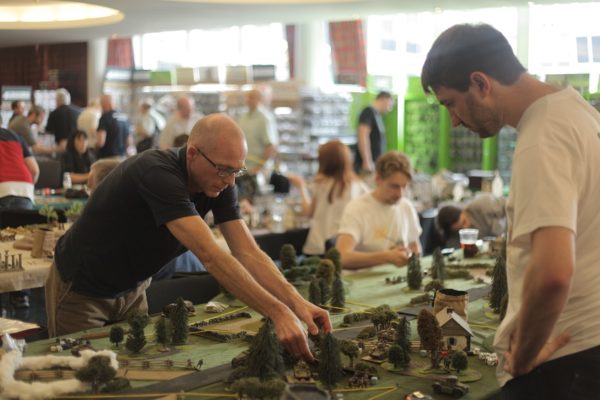 Round 1
The 8 (yes eight!) round event kicked off on the Friday night. After we had unloaded the van of the trade stand I saw my army and lists for the first time. A short while later I was playing my first round game against Joe Piddington. Joe is a film maker currently living in the accursed county of Devon. Being born in Cornwall I had more than just my game playing pride at stake.

A 750 game where I learnt just how good Polish cavalry is and Joe realising that getting within 18” of them is not a good idea. Combine that with his elite Waffen-SS unit deciding to retreat at the first time of asking meant a victory for the Poles was assured.

Round 2
Saturday morning began with a big breakfast, lots of coffee and a game of demolition against a great looking Japanese army. On a jungle board! Mike Goss was a seasoned General and the army would be a tough nut to crack. What quickly became apparent in all my games was that I would surge forward as quickly as possible charging where I could.

A very close fight ensued with a delayed unit of cavalry coming to save the day. Running across the table to finish on the objective on the last turn. Mike’s huge units got slightly bogged down in the jungle attempting to reach my objective and victory once again went to the Poles! 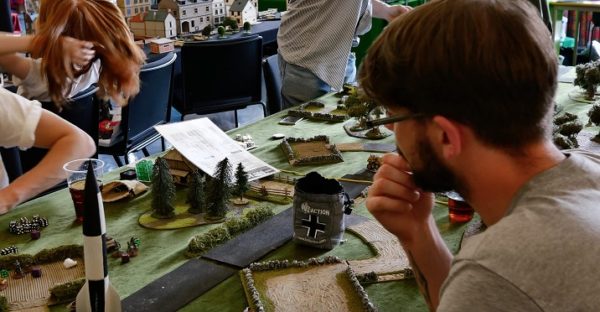 Round 3
This round saw me face off against another trader in the form of Ed Clewer. He had a great looking German force. Our mission was to rescue the plans from a V2 rocket – meaning a huge scrap in the centre of the table. As the forces converged a well placed airstrike meant that most of Ed’s army was pinned at the crucial time allowing the Poles to just get to the plans in time. Although they did have to steal them directly from the hands of a German Sniper team!

Round 4
Joe was again waiting for me. This time with a slightly different force as we played a larger game. The large units of Polish Infantry won the day as the cavalry distracted and harassed the enemy units. I was starting to enjoy seeing these elite formations race around and cause so much panic in the enemy ranks! 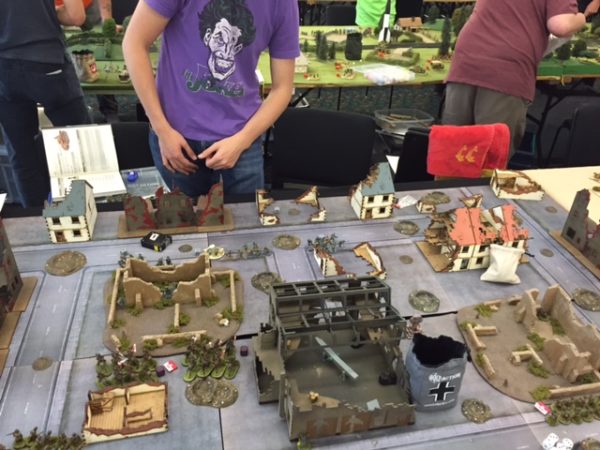 Round 5
Saturday evening was rounded off with the 4th game of the day. This time against a very pretty US Infantry force, with a number of Screaming Eagle units as the real punch. It was my first experience of seeing a Flamethrower against my force too (Joe had one in his army but it failed to get a shot off in either game as I am a very lucky boy!). 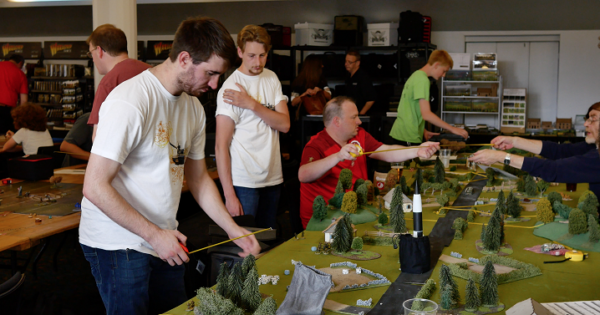 The scenario meant I had to traverse a lot of Bocage terrain and try and take a crash site. A crash site that would only come in on turn 4! The first half of the game saw me lose a number of units, including lots of cavalry. It looked as though the US force would sweep me away, but lady luck swung back in my favor as Ian decided to stop rolling anything over a 2 and some well set ambush units (and the aforementioned Flamethrower) failing to kill anything allowed me to hold on with enough units to capture the crash site!

Round 6
Sunday morning saw yet more coffee needed to help my sore head. And as if to add to the pain my new opponent Dave had a fantastic looking British tank platoon army. His 5 Stuarts backed up by howitzers and SAS units were the perfect foil to the army I had.

We exchanged fire in the first few rounds and with Dave coming out on top in the artillery duel. The uphill challenge set by needing to get across the table to take the objectives was made even harder when my cavalry reserves decided that turning up one unit at a time later in the game was a good idea. Dave just picked them off one unit at a time and completed a resounding victory! 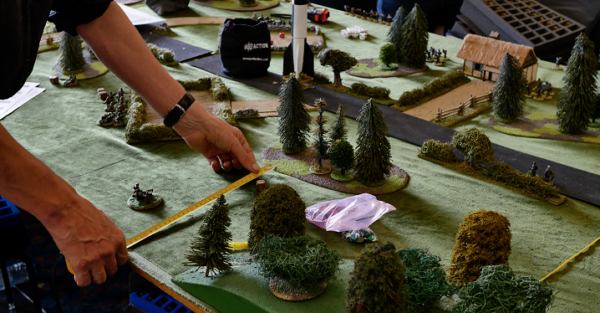 Round 7
This round saw me take on my 2nd tank platoon list. Rich had a very interesting list full of SU76i’s. They were great all round vehicles in this event having howitzer and medium AT capabilities. As well as being closed topped…

The scenario however meant that the infantry would be crucial to take the central objective. I used the cavalry to race around Rich’s army clearing the enemy infantry out (with a lot of luck too) and closed my eyes hoping that my force wouldn’t be blown away before the game ended. Luckily I held on for another win.

Round 8
By this time I was really enjoying the event including the exhaustion that comes with playing so many games in one weekend. I was very happy to see that I would be playing Bob in the final round. I had played on tables next to him most of the first day and was looking forward to a very enjoyable finish.

He was using a fantastic French list with Senegalese Tirailleurs and 2 units of Moroccan Goumier. The whole game was played in a great spirit with the Poles charging whenever possible. Bob however decided that rolling 2 Fubars in 2 turns and shooting his own units both times was the way to go. The second one saw his command unit take the shots of a full unit, the Lieutenant’s assistant being killed and him deciding that he should report back to HQ and leave the force to it.

Even in the face of this crazy turn of events Bob pushed on and almost got the victory his elite units coming on at just the right time. They were however very unlucky in the ensuing fight for the objective and the final units were destroyed with just seconds to go. 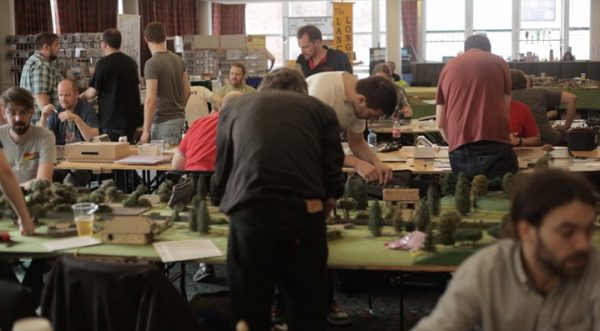 7 out of 8 victories over the weekend was way more than I expected at the start of the event. And in at least half of those I felt like I could have or should have lost. It just goes to show that you need to push on with a game plan and play to the end of every game!

So a huge thank you to everyone that played, especially to Gary and Colin for running such a great event. I am sure that next year’s event will be bigger and better again! 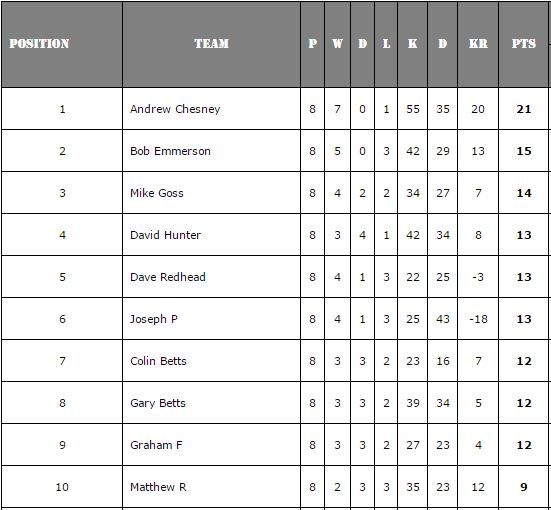 If you want to run your own tournament then its as easy as downloading this Tournament pack and get stuck in then drop by our Forum for help & advice – Keep an eye on our events page and perhaps see you at a tournament near you soon!