Beyond the Gates of Antares: First Game…

With more releases and information spilling out into the eager hands of playtesters worldwide, Beyond the Gates of Antares is popping up all over the web on wargaming forums, videos, blogs – and it’s making an appearance at gaming clubs as players get to grips with the universe and the rules!

A regular contributor to the Warlord Games Newsletter, Sam Phillips headed to his local Gaming club with rules in hand, eager to get to grips with the new system – and has reported back with a first impression of the rules system…


Whilst at our local club we decided to have our first game of Beyond the Gates of Antares, with myself choosing the Algoryn and my opponent, Jack Lashbrook, taking the Boromites, who set up first. We took turns placing the scenery, so we were both happy with the battlefield.

For this particular game we wanted to keep things nice and simple and get to grips with some of the key dynamics of the system, therefore we did not use many of the advanced rules. This provided a nice and simple intro game, with no objective other than to wipe out the other side. It should also be noted that we did not use the full armies listed in the book, instead just using three units each.

Antares shares a number of core mechanics with Bolt Action – including the Order Dice system –  you receive one of your coloured Order Dice per unit – and your opponent receives a dice each for their units – the dice are placed into a dice bag,and you then draw blind to determine which player gets the next activation. This way nobody knows who will get to activate next!

With the units which we took for this first game, all of our infantry units (once modifiers have been taken into account) had the same Res (Resistance) stat – which made this game much quicker and easier – and I’d definitely recommend this for anyone else new to the game. 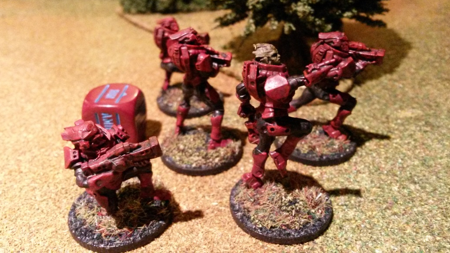 The game began with my Algoryn drawing the first dice, I ordered my Infiltration squad up out of cover and onto the outskirts of a wooded area – providing me with some soft cover. Once they had finished their Run order we checked to see if they could see the Boromite Work Gang lurking just behind a second set of trees, however the two parties could not draw a line of sight to each other at this stage.

The next dice out of the bag was Algoryn once more, so I proceeded to move my second unit. I ordered an Advance – moving the Infantry squad up towards the centre of the board, and managed to clamber into a trench from some ancient civilization long-forgotten. The intention was to hold that position whilst my commander, on the far left of the board could move up into the building on his left. 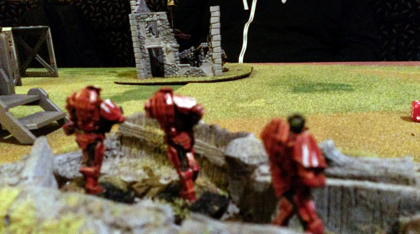 The next dice was drawn…this time going to the Boromites. With the threat of my Infiltration squad swiftly approaching, the Work Gang advanced forward and opened fire.

In order for Jack’s squad to hit mine, he needed to roll less than then their Acc stat (Accuracy) of 5. My unit was in plain view, so no modifiers were applied. Unlike many other games systems, you want to be aiming for lower numbers, not higher when shooting, which seems simple enough, but as veteran players of other systems, we forgot on the odd occasion! As it was our first venture into Antares, we went back to the rulebook a number of times to ensure that we’d interpreted and understood the rules correctly.

The Boromites managed to score 6 hits on my unit -­ the next stage was for me to roll against my Res stat (Resistance) of 6. Fortunately the Reflex armour they were wearing meant they got an extra +1 to their armour; unfortunately due to the Boromites weapons having a Strike Value of 2, this applied a minus 2 penalty! I rolled six D10 dice, needing to roll a 5 or less in order to save my troops.

Unfortunately I managed to fail half of them, and the unit was stripped down below half strength with a single volley of Boromite fire! I placed a pin marker on the unit, ­much the same as in Bolt Action. Because I lost so many, a Command check was taken, with minus 1 on the dice roll for the pin marker. They promptly failed and were taken off the board! Ouch.

My Algoryn Infantry squad attempting to hold onto the centre was immediately fired upon from the Boromites facing them. They managed to slay three in another impressively deadly volley and to my dismay I once more failed the command check and the rest fled for their lives. The battle was not going at all well!

With these losses in mind, my commander decided to take the fight to the enemy, opening up with plasma rifles on the Gang Fighters out in the open, managing to knock out two and placing a pin on them. Finally the Boromites took a shot at my Command Team, managing to kill one of the bodyguards. Fortunately this time the Algoryn passed their command check and stayed in play. 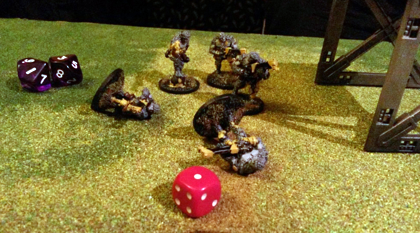 The Workers around the back of the second set of trees moved into a better position, aiming to catch the Algoryn in a pincer movement. The next dice out the bag was for the Boromites and they proceeded to fire on the Algoryn Command Squad. Despite immediately ordering my unit Down, they managed to slay another.

My turn came next and due to having half of the unit gone, I needed to see if they would stay in the game… they failed their test and fled the board!

The game ended with my commander fleeing for his life as all morale broke down. 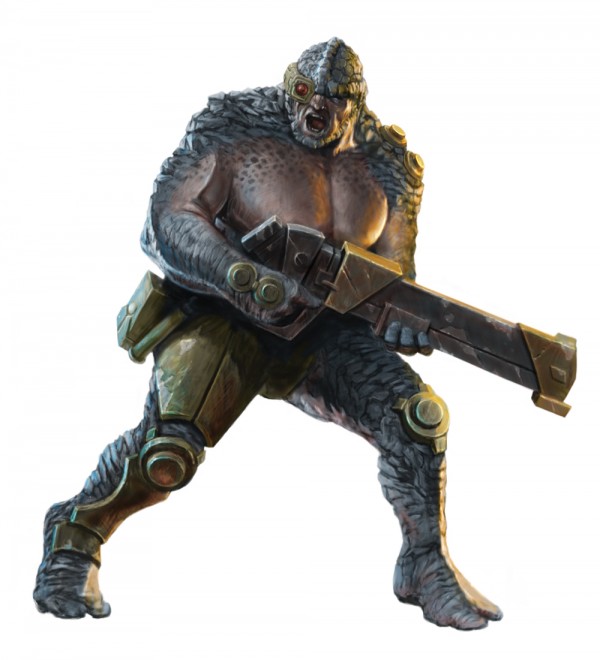 Our Impression of the Game

This mini-game really gave us a flavour for the core mechanics of Beyond the Gates of Antares – having played countless different game systems before, it has a very distinct feel. Yes, it uses Order Dice and Pin Markers, so those of you who are seasoned Bolt Action veterans will be able to draw parallels – however, the D10 system, and the additional sci fi flavour introduced by some of the additional rules really make the system stand by itself.

The rules are quick to pick up, enabling you to get stuck in almost straight away. A few minutes were spent looking back over one or two pages but when learning a game you would expect to be doing this, at least for the first few battles.

Fortunately there are elements within the Beta rules pack to help you along – such as templates which you can print out, as well as a handy reference guide. Now – we have a long way to go before we are masters at the game, but overall it was fun, brutal (believe me!) and aesthetically pleasing. The miniatures are fantastic, and the gaming is frantic – and we’ve already conscripted quite a gathering of other players to try out this new system!

For those that play 40k, this will be right up your street for many reasons, but key are playability, collectability and affordability. This new sci fi game has exactly what you want, and with a great community at its heart this is a game by gamers for gamers. This is easily the one to watch and it continues to grow, with more factions, vehicles and … other things well on their way!

Now is the time to get into Beyond the Gates of Antares! 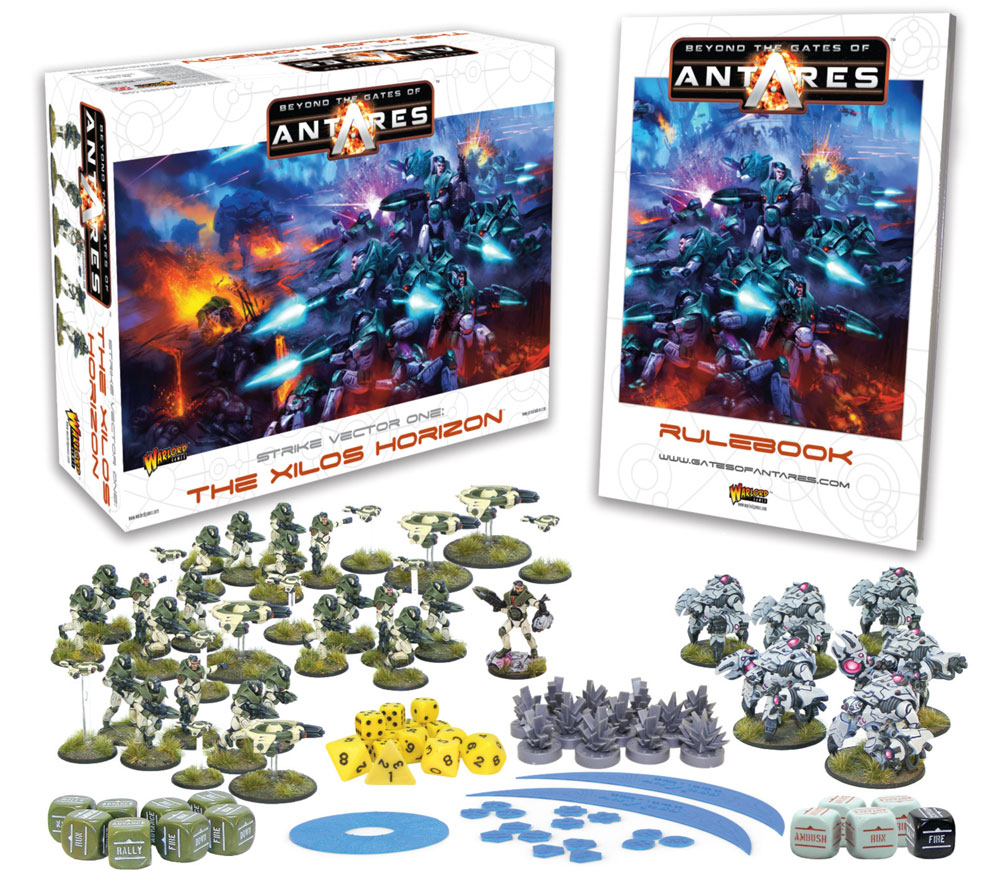