From the Frozen Wastes: Barbarians of Erehwon

Raiding and pillaging from the frozen northern wastes of Erehwon...

The Barbarians list represents a whole range of wild and savage warbands from hulking Neanderthal warriors of the Ice Age astride bellowing mammoths, hairy Norse raiders accompanied by fearless berserkers, and the proud Fianna of Celtic legend with their chariot-riding heroes.

Our list is highly adaptable and can be used to create warbands from a wide variety of historical cultures as well as the mythic past. It is also an ideal way of building a force inspired by the pages of classic Sword & Sorcery fiction and – of course – the movies and model range inspired by them. 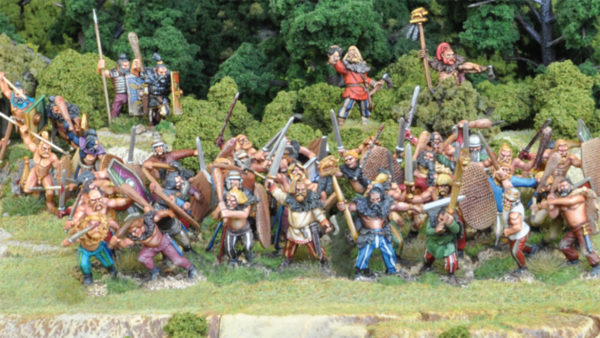 A Barbarian Warband emerges from the spring forests!

Barbarians are naturally superstitious and behold the spirit world with an appropriate mix of awe and terror.

These are dangerous opponents and, like most barbarian warriors, they like to keep a big axe or huge sword handy. Ordinary barbaric warriors will sometimes settle for a spear and may even be found waving a bow, but on the whole, they prefer to get stuck in despite their generally low levels of armour.

Barbarians are naturally superstitious and behold the spirit world with an appropriate mix of awe and terror.
They are careful to placate the gods of sky, earth, wind and water, but they expect nothing of the gods by way of favour.

Their wizards are represented by shamans, possibly marked with the skin of a totemic beast, a headdress made from the skull of an animal, or some other token of their spirit guide. 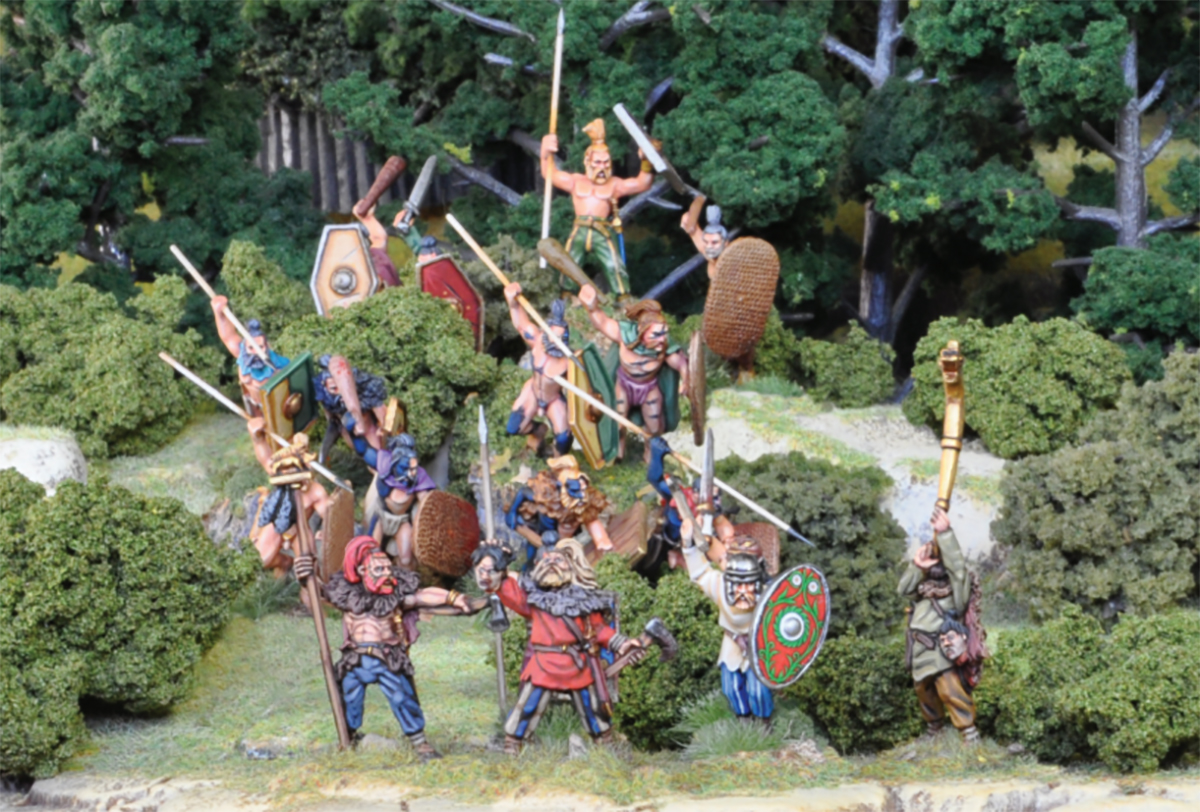 Woad-painted Barbarians form a skirmish line ahead of the main force!

Some barbarian forces are accompanied by swarms of malicious urchins armed with rocks or slings – they can be annoyingly good shots too!

Some barbarian forces are accompanied by swarms of malicious urchins armed with rocks or slings – they can be annoyingly good shots too! Others include crazed berserkers. Mounted troops are always an option although on the whole barbarians prefer to fight on foot. With a savage’s love of the hunt, they bring their warhounds to battle under the control of pack masters who lead them to their quarry.

Chariots feature as part of many barbaric forces, including those inspired by Celtic legend. The rather more exotic mammoth has been included mostly to provide an entertaining large monster for those Neanderthals and other fantastical barbarians that stride to battle atop huge elephantine beasts! Players should feel free to use the same stats and rules for any large monster or dinosaur that fits
the bill.

Lastly, though not noted for their sophistication when it comes to mechanical things, a stone thrower has been included to provide some long-ranged brutality for those who crave it!

Getting Started with Barbarians 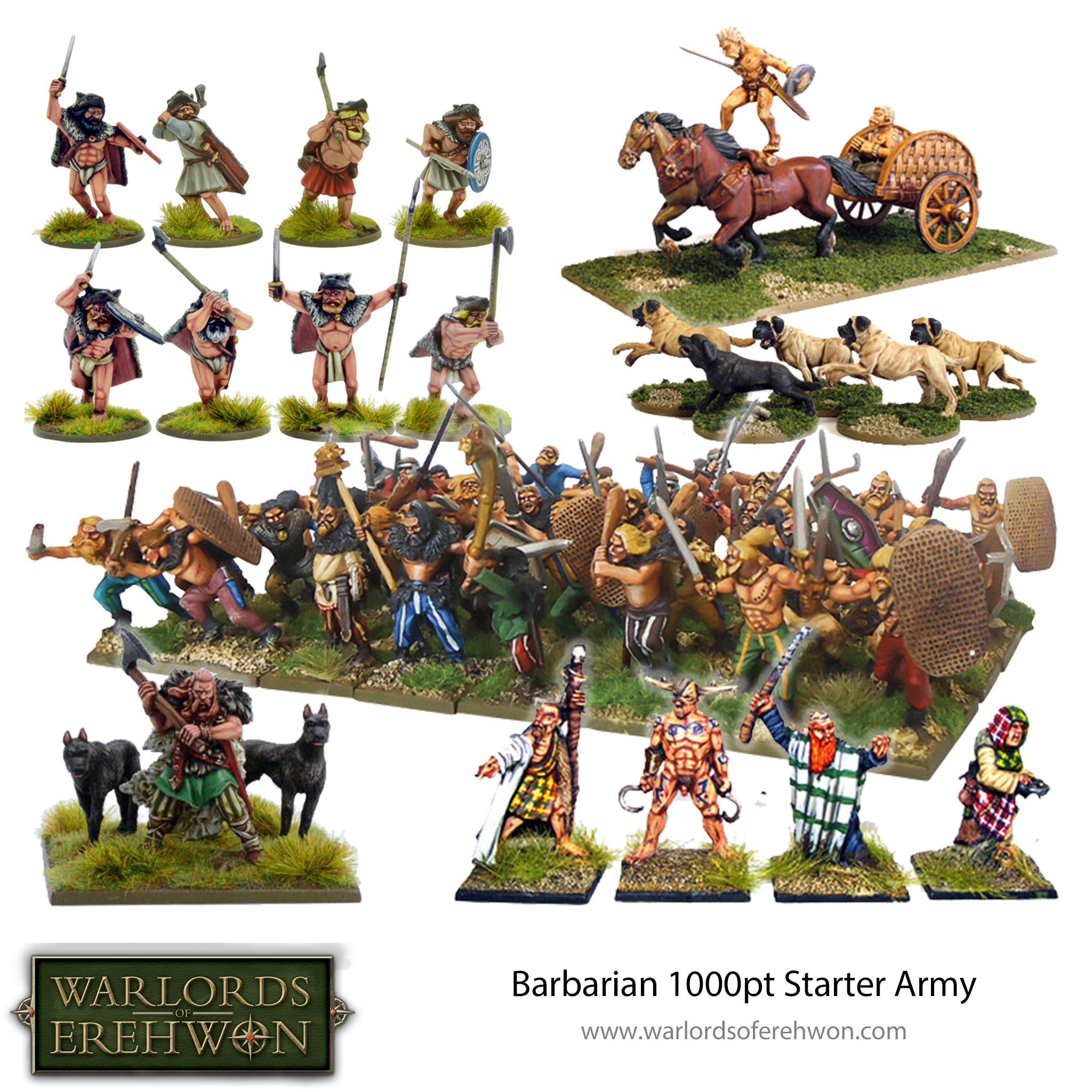 We’ve scoured our Hail Caesar range to put together this fantastic starter army for Warlords of Erehwon. The whole army bristles with ferocious rage, ready to slip its traces and charge into the fray, howling a bestial battle cry.

In the set, you’ll have enough to assemble the following army, for a total of 998 points:

Tom spends most of his time buying books and painting miniatures. He enjoys putting animals on the bases of his miniatures and half-finishing side projects. Some say that he lives in a tower on top of some windswept northern hill with his wife and cow-patterned cat, Spaghetti.
View Profile | View all posts by Tom Mecredy
Black Powder: Artillery on the Battlefield
Navigating the High Seas: Terrors Lurk Below