STRIKING FROM THE SEA:
NO.47 (RM) COMMANDO AT PORT-EN-BESSIN

This excellent article was written by Mark Barber. It represents a great example of how to go about fielding a Bolt Action force entirely made of one specialized unit, like paratroopers, cavalry or indeed commandos.

Mark has done his research thoroughly and then created a platoon selector and some special rules that allow all of the infantry in the platoon to share the special rules normally unique to the commandos infantry sections. You can do the same with any specialized force, like Gurkhas, paratroopers, Chindits, etc., creating your own special platoons.

As I have edited this article together with Mark and we are now both happy with it in terms of rules, you can treat this platoon selector as an ‘official’ addition to the Armies of Great Britain book. 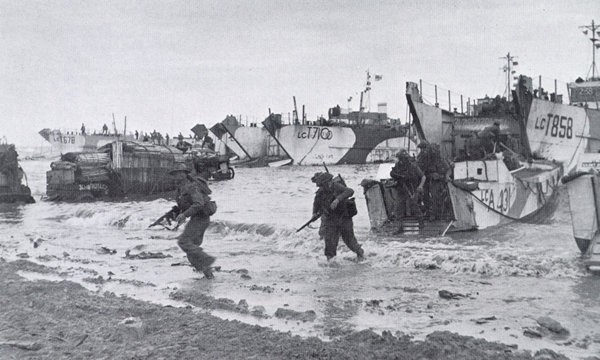 “The German soldier in World War II has assumed a mythical quality as the best fighting man not only in that war but in almost any war ever fought. The judgment is wrong… Allied elite units, the airborne and Rangers and Commandos, were better than anything the Germans put into the field.”
Stephen E. Ambrose “D-Day”

The term ‘Kommando’ had its origins in South Africa at the turn of the 20th Century; irregular fighting units who caused havoc against the forces of the British Empire in the region. Move forwards to 1940 and British Prime Minister Winston Churchill – himself a veteran of the South African conflict – well remembered the outstandingly disproportionate effect which could be caused by a small, aggressive, highly motivated and well trained force which could strike with stealth and surprise.

In the summer of 1940, the first raids against enemy coastlines were made by Commandos of the British Army, men who had volunteered for ‘special service of a hazardous nature’. In 1942 the first Royal Marine Commando was formed – a move considered logical and if anything overdue by many. Whilst Commandos were undoubtedly an elite unit, they were first and foremost specialists in the theatre of amphibious assault and this had long been the province of the Royal Marines.

Through the dark early years of Britain’s war, newspaper headlines took great pleasure in detailing the successes of daring Commando raids against the enemy coastline – most often on a small scale, but occasionally producing amazing results such as a heroic raid on St Nazaire in March 1942. Unfortunately, not all activities were successful – as the Dieppe raid of August 1942 would prove. By the spring of 1944, with the planning for the Allied invasion of occupied Europe now well underway, the Commandos of the Royal Marines, British Army and Allied nations would be called upon to work alongside their brethren of the conventional infantry in the most critical amphibious assault yet – Operation Overlord. 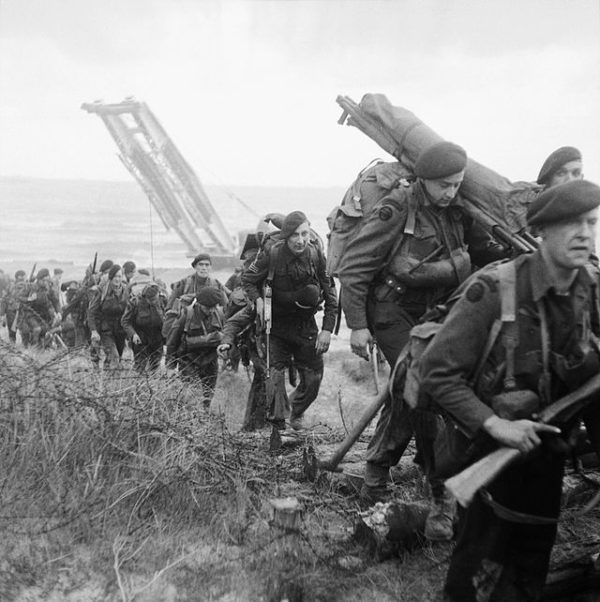 For D-Day itself, the Commandos contribution came in the form of the 1st Special Service Brigade under the command of Brigadier Simon Fraser, The Lord Lovat, and the 4th Special Service Brigade under Brigadier BW ‘Jumbo’ Leicester. The 1st SS Brigade consisted of 3 Army Commandos and 1 Royal Marine Commandos, whilst the 4th SS Brigade comprised of four RM Commandos. Each Commando was made up of six Troops – each about the size of a company. Five of the Troops were split into two Sections of sixty men whilst the sixth was a Heavy Weapons Troop equipped with Vickers machine guns and 3 inch mortars.

1 SS Brigade landed at Sword Beach and was perhaps most famous for when 6 Commando arrived at Pegasus Bridge to relieve the stoic defenders of Major John Howard’s force from the British 6th Airborne Division. However, for the purposes of this article we will look more closely at 4 SS Brigade; particularly No.47 (Royal Marine) Commando.

Elements of 4 SS Brigade landed on all three of the British/Canadian beaches: Gold, Juno and Sword. The Royal Marines of 4 SS Brigade were given a primary task – to act as the linking force between the beaches to ensure there were no gaps in between the areas of the amphibious assault which could be exploited by a German counter attack. This meant not only linking up Gold, Juno and Sword but also – for No.47 Commando – capturing the coastal village of Port-en-Bessin to bridge the gap between the British forces on Gold and the American forces to the west at Omaha Beach. Perhaps even more important, Port-en-Bessin had been designated as the Normandy end of PLUTO – the Pipe Line Under The Ocean which would pump fuel directly across from England to keep the advance into France sustainable. 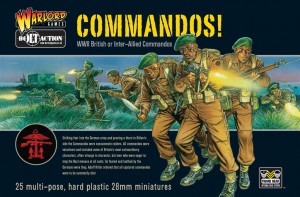 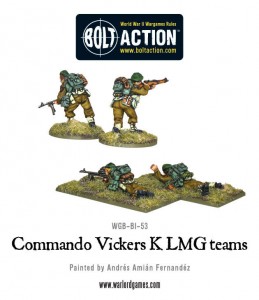 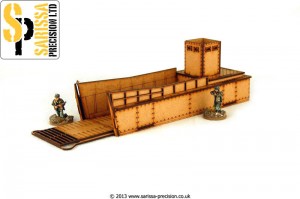 View the Commando Range in Store

The marines of No.47 Commando, conspicuous in their green berets and bergen packs, boarded their sixteen Landing Craft Assault vessels at approximately 0700; the shallow bottomed, 12 feet long craft motored away from the larger ships and headed towards Item Sector of Gold Beach – the sector furthest to the west. The landing craft heaved and listed in nausea inspiring corkscrews in the swell as the marines closed with their target, gallows humour and banter being exchanged as the familiar lyrics of the popular song ‘We Don’t Know Where We’re Going (Until We Get There)’ drifted across the air from a rocket barge nearby. Some men stood up and began singing heartily. Whilst much of this was bravado, many marines later recalled that the thought of closing with the enemy wasn’t the problem; seasickness was the main issue.

Then the enemy fire came. Shells impacted into the water amidst the invasion fleet, showering the occupants of the LCAs and tumbling the craft with near misses. An LCA was hit, and then another. Marines scrambled over the side of a sinking landing craft, tearing off their equipment and dropping their weapons as they fought to keep from slipping beneath the waves, some in vain. Heavy machine gun fire from the coast swept across the landing craft and the stricken marines in the water alike. Further problems were encountered as the LCAs struggled to negotiate the network of obstacles and mines which lay in the shallow water, despite the best efforts of navy and marine frogmen to destroy them. Four of the Commando’s LCAs were sunk and eleven were beached due to damage, leaving only one to return to its parent ship. Despite the chaos which ensued, the typical British nonchalance prevailed amongst the marines of No.47 – “perhaps we’re intruding” one soldier remarked to his comrades whilst they struggled in the water, “this seems to be a private beach.” By the time the marines had arrived at the beach and began trying to rally to reassemble order, one fifth of their number were killed, wounded or missing. Only ‘B’ and ‘X’ Troops had arrived intact.

However, their fortunes were to change, if only briefly. The German defenders, (different sources state them to be elements of either the 352nd or the 716th Infantry Divisions) soon realized that they were heavily outnumbered and outgunned by the invasion force; given the task of defending the relatively short stretch of beach which allowed the attackers to close quickly, the defenders surrendered. No.47 Commando’s CO, Lieutenant Colonel Phillips, was amongst the missing. Major Donnell took charge of the survivors. Not only had he lost men, many of those remaining had been forced to abandon their equipment to reach the shore and were now unarmed. The radio equipment which was vital to call in support for their assault on Port-en-Bessin had also been lost. Gathering up weapons and equipment from the surrendered German defenders, the marines headed inland towards their main objective.

The twelve miles from Gold to Port-en-Bessin was slow; the marines initially advanced behind a mine-flail fitted Sherman to negotiate a mine field before then moving cautiously through the Normandy countryside, ever ready for snipers and fixed machine gun positions hidden in hedge rows or buildings. During the advance a number of missing marines managed to catch up with the main force, including unit commander, Lt Col Phillips. After overwhelming a group of German defenders, No.47 Commando stopped to spend the night some two miles from their objective at a small hill named Mont Cavalier.

The assault began the next morning. Port-en-Bessin was situated ideally for a natural defence – flanked by two 200 foot tall cliffs – know as the Eastern and Western Features – German forces had also built a concrete fortification to the south. The marines advanced after a bombardment by the light cruiser HMS Emerald; both cliffs, the concrete blockhouse and the port itself were systematically attacked. The street fighting in the port itself began well, with the marines rapidly advancing from house to house and defeating the German defenders, the familiar thumping of Thompson submachine guns and cracking of Lee-Enfield rifles now augmented by their captured weapons. However, one Troop pushed slowly up the Western Feature, hampered by minefields, machine guns and flamethrowers. Having advanced about half way up the feature, withering fire suddenly swept up from two German flak ships alongside in the harbour below. In the space of only a few minutes eleven marines were killed and seventeen wounded and the entire attack stalled. Exhausted after fighting with minimal equipment and supplies for two days, broken by only two hours sleep, the situation for the marines deteriorated further still when their HQ on Mont Cavalier was overrun by a German counter attack.

With night falling, it was Troop-Commander Captain Cousins RM who led a reconnaissance party up the Eastern Feature and found a way of advancing. Leading from the front as his marines yelled savagely and fired from the hip on the advance, Cousins was killed as he carried out a frontal assault on a concrete bunker on the Eastern Feature. Inspired by his sacrifice, his men continued on and the German garrison soon surrendered. The next day, the Western Feature also fell and No.47 Commando had achieved their objective, despite the odds. Contact was made with American forces on June 9th and vital logistical support along the PLUTO line followed shortly afterwards. 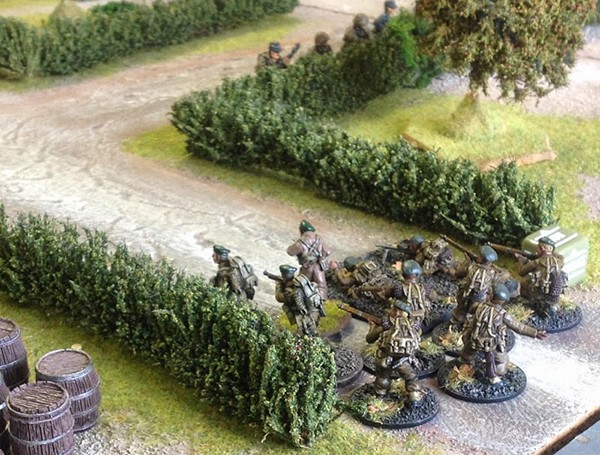 Spyros from the Band of Wargame Brothers blog Commandos advance…

“It is doubtful whether, in their long, distinguished history,
the marines have ever achieved anything finer.”

Army lists for Commando Raiding Parties and British forces in the Normandy Campaign are both detailed in Bolt Action’s ‘Armies of Great Britain’ supplement. However, there is no guidance on using Commandos as conventional infantry. Below are some rules for players who may wish to field such a force – these are now ‘Official’ rules.

Please keep in mind that these rules are generic for all Royal Marine Commando operations in the Normandy Campaign and are not based on the limited equipment and support which No.47 Commando operated with as detailed above. Given the conflicting source material available from the period, the list below is based on a number of sources rather than a single document so as to give an interesting and different (if very point heavy!) army list for players opting to use it.

Note that, as Commandos were used in the first wave of D-Day and in flanking operations during the push into Normandy, some of the heavier elements which are available to support conventional infantry are not available.

Defend the Beaches with your German opponents: 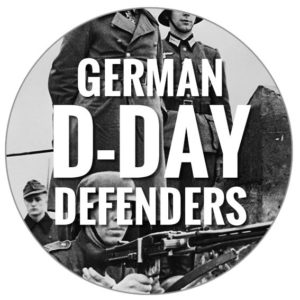 Special thanks to the staff of the Royal Marines Museum, Southsea, for helping with the article and research material for the attached army list.