The Pacific war was a desperate and bloody part of the global conflict of WWII. From Guadalcanal through to Okinawa and the attack on the Japanese mainland, many different forces fought on both sides. In Bolt Action you are able to create a force based around one of the many theatre lists provided in the supplements, or if you wish to make one yourself or do your own research, the full list allows you to pick and choose your force as you see fit. 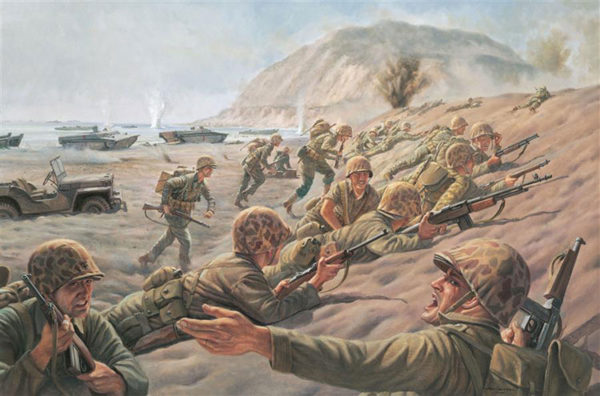 Here at Warlord HQ, four willing volunteers (no political officers needed this time) have begun collecting armies for the Pacific theatre and we have decided to show you how and why they did it. Over the next few weeks and months we will show you how we started the process through to playing games with 500 and 1000 point armies.

Bill “The Prop” Bentley is collecting a classic USMC infantry force with lots of infantry, but beware the scary Satan tank lurking in the backing!

Andrew “Cheesey” Ches is going for an Island Defence force. A structure that was used extensively throughout the war, where a few thousand men were left on an Island and told to hold it to the death!

Richard “The Face” Dando has spent many, many hours on his US landing craft so expect that to be his main focus.

Daz “Jonesy” Evans has gone for a Japanese Mechanised platoon (on bikes with a twist!) with Naval Landing forces as a reserve.

Be sure to tune in next week for the first instalment where we show off our compulsory choices when starting any reinforced platoon – the HQ and Infantry Squads.