The Maus has Returned!

The mighty Maus has returned! Make sure you grab yours now! Limited availability!

One of the most enigmatic armoured fighting vehicles of the Second World War with the fairly innocuous designation VK100.01 Porsche Type 205 yet to any serious student of WW2 AFVs this subject is better known as the Panzerkampfwagen VIII Maus (Mouse). 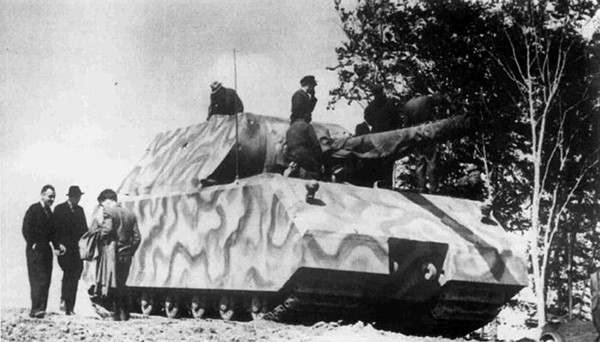 Prototype V2 ready to head to the front

This example of late war German imagination may be named after a tiny rodent but it is anything but mouse like. Weighing an astonishing 188 metric tons the Maus still holds the record as the heaviest fully enclosed armoured fighting vehicle ever built. Unlike the majority of the so-called ‘paper panzers’, advanced German tank designs which only existed in technical schematics and project documentation, the Maus was actually built with two prototypes almost complete and perhaps as many as 9 others under construction when Hitler cancelled the programme in late 1943.

There are even unsubstantiated rumours that one of these prototype vehicles may have been used in combat against the Soviets. Speculations on how the Maus would have actually performed in combat are of course securely in the realms of ‘what-if’. However, one of the great things about Bolt Action and wargaming in general is you can experiment with these remarkable examples of the ‘what might have been’ and incorporate them into your gaming.

I can imagine that there are plenty of ‘tread heads’ out there in the general Bolt Action Community who will find the temptation of adding one of these monsters to their late war German army difficult to resist. 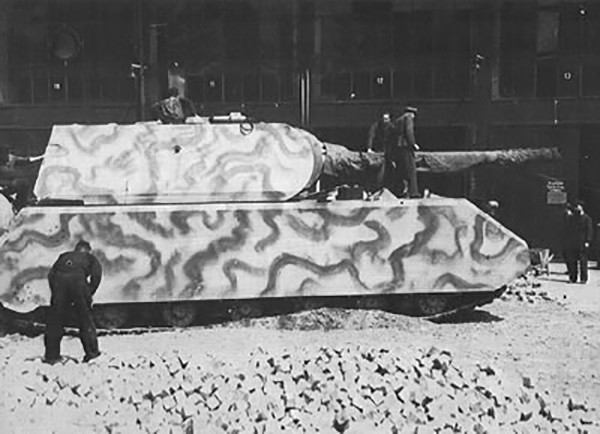 V2 on the move, note the camo scheme.

A Bit of History

The shock of first contact with advanced Soviet T-34s and KV-1s during Operation Barbarossa had been a major wake-up call to the German Panzer forces whose Panzer III and IV designs had proven capable of handling anything the Western Allies could currently put into the field. This was especially true when they were a part of well led German tank formations. While it was true that by 1943 new and impressive designs such as the Panther and the Tiger were being made available to the Panzer divisions. The German leadership influenced heavily by Adolf Hitler wanted more.

The new tanks were bigger and heavier than their predecessors clad in thicker armour and carrying larger and more effective anti-tank guns and Hitler with his fascination for war winning ‘Wunderwaffe’ was always looking for the next big step and that meant bigger tanks with larger guns. Whether this fascination for a larger tank was influenced by Hitler’s experience as an infantryman in the First World War trenches cannot be said, but there was certainly no shortage of powerful and influential leaders in the German armaments industry that wanted to fuel the Fuhrer’s obsession. 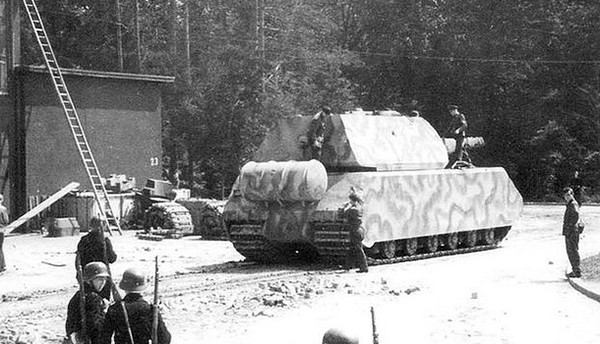 Prototype V2 – what might have happened if the allies had to confront it?

Chief amongst these was Ferdinand Porsche, a Czech born engineer, who in 1931 created the Auto UnionAG company which would design and build the Volkswagen Beetle or ‘people’s car’. A strong supporter of the Nazi party he was accepted for German citizenship in 1934 and took on the persona of the ‘Great German Engineer’. He was a great friend of the SS and by 1943 held the paramilitary rank of SS-Oberfuhrer.

In 1941 he submitted a design to be considered in the heavy tank competition that would eventually result in the Tiger I. Although 90 chassis and a few completed examples of the Tiger(P) were produced they were overly complex with their hybrid electric power plants, and further production was cancelled as the rival Henschel design was adopted. The majority of the unused chassis were converted into the Panzerjager Tiger (P) which at one time bore the nickname ‘Ferdinand’ after their creator.

Smarting with the embarrassment of the Tiger (P) the designer played to Hitler’s obsessions by presenting the VK100 Porsche Type 205. A design for a super heavy tank far bigger than anything previously considered.  Hitler enthusiastically approved it and demanded that a prototype be produced and demonstrated as soon as possible. Originally the design was to be called Mammut or Mammoth, but demonstrating perhaps a little humour and irony, it was renamed Mäuschen or (Little Mouse). When the prototype was produced the name Maus (Mouse) stuck. 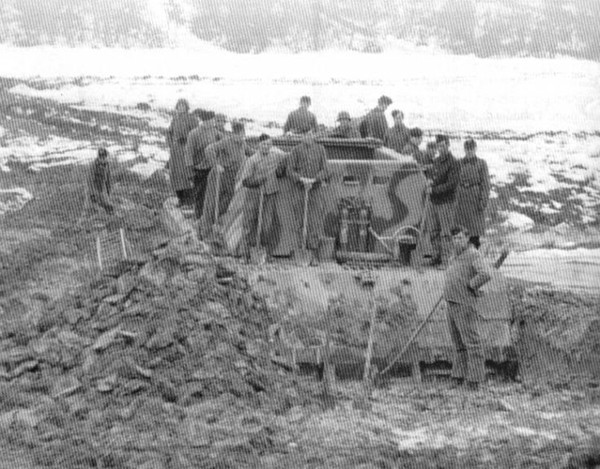 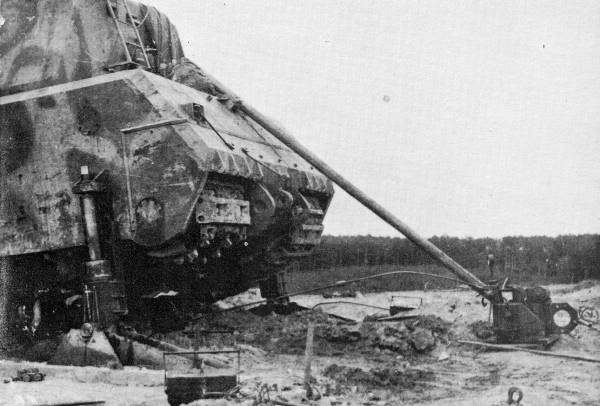 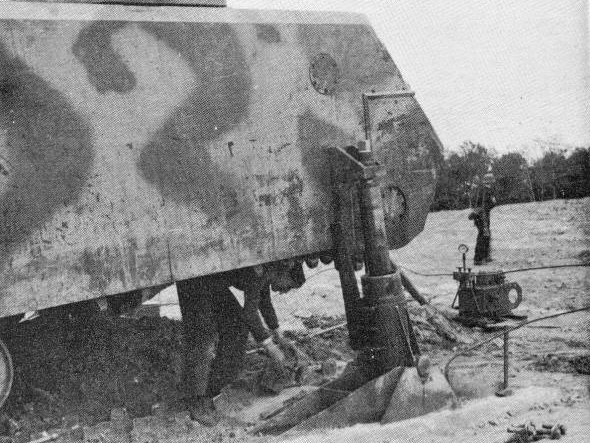 A certain amount of bravery required! – Note the camo scheme on V1

The Maus was a huge ‘breakthrough tank’ designed to penetrate heavy enemy defences whilst shrugging off all the enemy could throw at it. To do this it needed to large and very well protected.
Weighing in at over 180 tons and carrying armour of up to 250mm which at the time was proof against most current anti-tank guns it appeared to promise much.

Its main armament was prodigious comprising of not one but two main guns. The primary gun was a 128mm KwK44 L/55, a highly effective weapon that also saw much use in the Jagdtiger Tank destroyer. At various points during its development both 150mm and 170mm main guns were considered however Hitler, wishing to see his ‘toy’ deployed as soon as possible, settled on the 128mm. 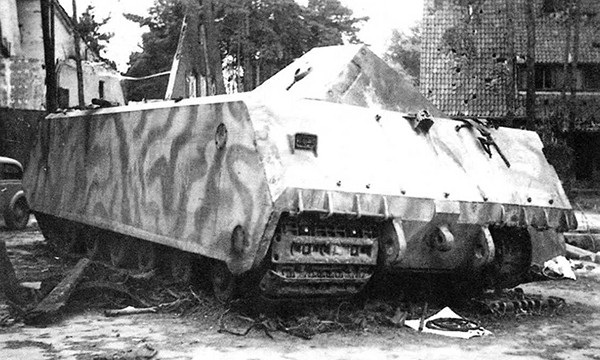 V2 destroyed by crew using explosives in the engine compartment – or did it see combat?

Where most tanks had a co-axial machine gun fitted alongside the main gun the Maus took this concept to the extreme by having the co-axial mount fitted with a 75mm KwK44 L/36.5 gun. This was no less than a shortened version of the 75mm carried as main armament by the later Panzer IV variants! Whilst this might be seen as a little over the top there were some good points to this arrangement. As a breakthrough tank the Maus would face multiple anti-tank and other fortified positions which would need to be neutralised. Whilst the main 128mm could handle these, only around 30 rounds of ammunition would be carried, many of which would be penetrator anti-tank rounds. The 75mm on the other hand was quite capable of handling these sorts of targets and of the 200 rounds carried the majority would be high explosive.

The soviets using captured equipment remove the turret from V2

Despite recognising that the Maus would be operating in a highly hostile environment the initial prototypes also suffered from a dangerous Porsche trademark of having little or no close in weaponry to handle infantry assaults. This problem had disastrously impacted the ‘Ferdinand’ tank Destroyers deployed at Kursk. Only after fierce objections from the then Inspector of Tanks Heinz Guderian were additional defensive machine guns added to the Maus design. 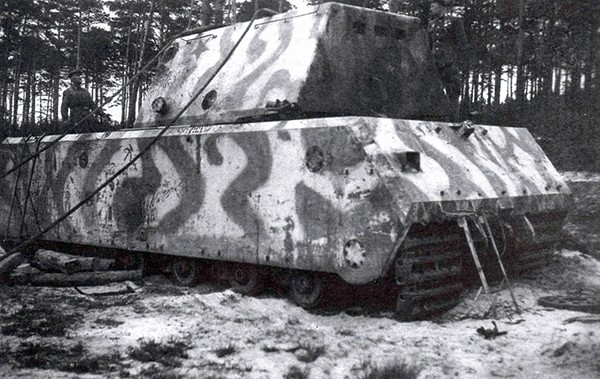 The initial plan was for a prototype to be tested and evaluated by June 1943 and a production line to be set up to produce 150 vehicles.  However, like many advanced technology projects the Maus was subject to constant review and revision and finally cancelled in October 1943 but not before 2 prototypes V1 and V2 had been built.  Despite cancellation both vehicles were continually tested and their performances evaluated. The testing showed that a production Maus would have faced many problems. 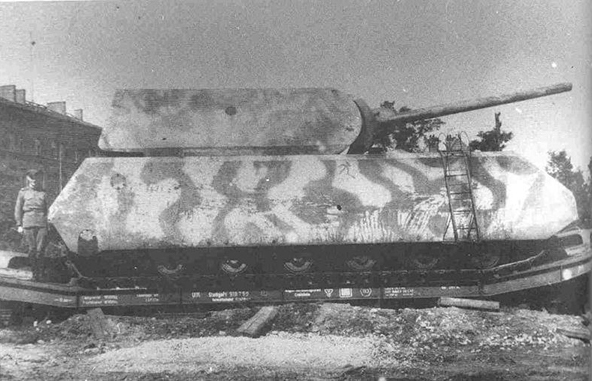 Like the Tiger (P) the Maus would have mounted a traditional internal combustion engine acting as a generator providing power to two electric motors which would drive the tracks. It soon became clear that the electric drive whilst highly advanced would deliver a poor performance due to the sheer size and weight of the vehicle itself. Initial prototype trials also showed that cross country speed would only be around 8 miles per hour (13 Kph).

It was also became clear that the Maus was far too heavy for the majority of road bridges making river crossings problematic. As this would be a major tactical failing an ingenious but complex solution was developed. Any Maus crossing a river would operate in ‘Buddy Pairs’. Equipped with a schnorkal to provide breathing air for the six-man crew the Maus could be submerged to a depth of 8 metres. Electrical power for the track drives would be provided by the second Maus which would be high and dry on the river bank running its diesel or gasoline engines at full capacity to generate the required power.

Though bold in concept the thought of a tank operating like a submarine connected by a flimsy cable to its only power source must have been daunting to any prospective crew. The V2 prototype fitted with a production turret and armament was actually delivered in March 1944 and was tested at the Kummersdorf tank testing range along with the turretless V1. 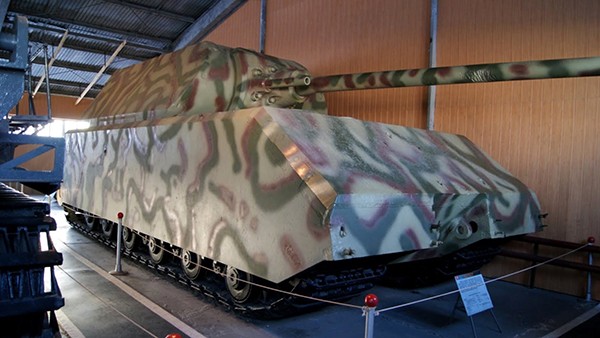 However, the story of the Maus does not end there. Whilst various accounts insist they were deliberately blown up to avoid capture others have speculated that as the final curtain descended on the Third Reich the prototypes  were used in either a last ditch defence of Kummersdorf, or dispatched to help in the defence of the OKH HQ at Wünsdorf. As there are no mentions of any encounters in Red Army records these stories should be taken with a pinch of salt, but the possibility has fuelled many rumours. One Maus (made up of parts from 2 that were captured) did actually survive the war ending up in the Russian Armour Museum at Kubinka – although its existence was not revealed until after the collapse of the Soviet Union.

Demand for the Maus has been overwhelming and as such production is underway to provide more as soon as possible. Pre-order yours today to be first in the queue when the new casts arrive over the next few weeks!

Unsurprisingly this is a challenging model to cast so we only have a limited stock available at release. After this initial stock is gone, we will cast your Maus to order especially for you, so there may be an extra wait.

Get the full Bolt Action rules for the Maus in this article: 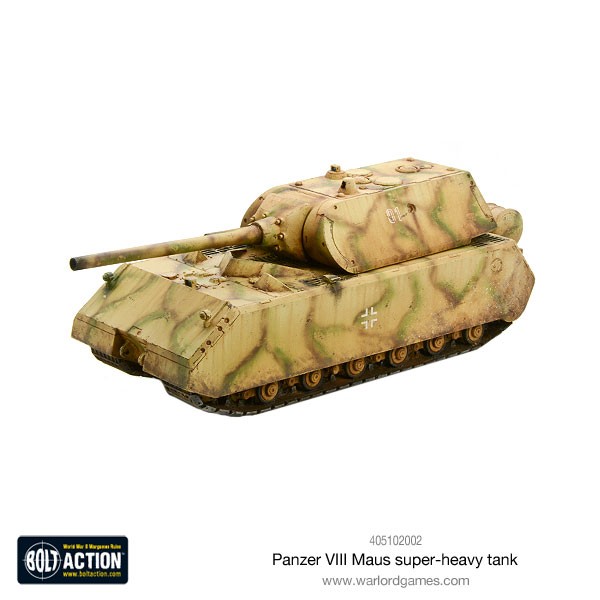 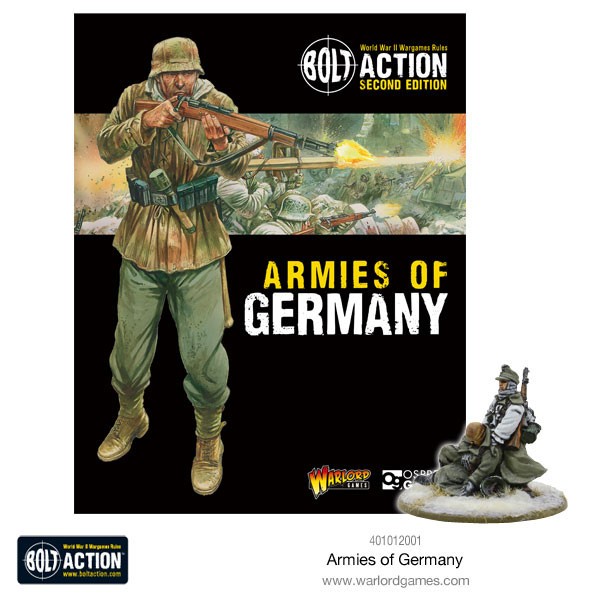