With the launch of Bolt Action Second Edition last month, we made a few key changes to the core game, based upon the feedback of the vast global network of gamers and hobbyists who’ve made the game their own over the past 5 years or so…

We’ve kept all of the aspects of the game which you know and love, and have tweaked the parts which seemed to cause the most issue… we were careful not to overhaul things too much, so that all of the ‘Armies of…’ and Theatre Books remain relevant and invaluable…

…that is – all except one. ‘Armies of Germany’ was the first expansion book which we released nearly four years ago now… and with the subsequent release of 11 further books (…and that’s not including ‘Tank War’ or ‘Konflikt ’47’!) – we felt that the Germans needed a revision… 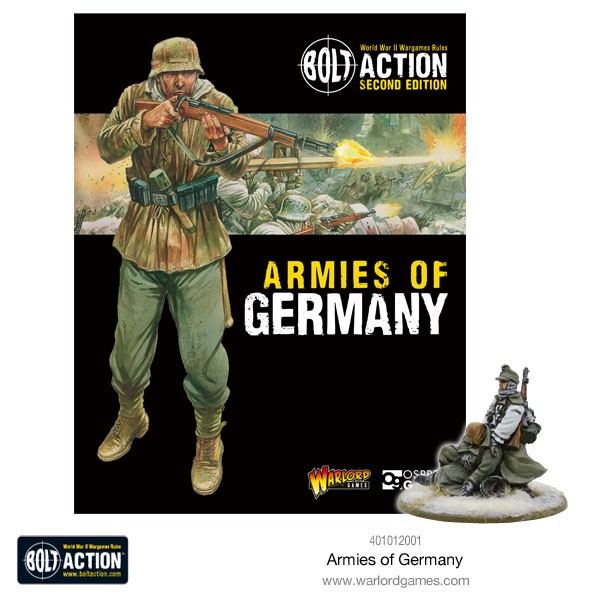 What is this book?

‘Armies of Germany 2nd Edition’ is a supplement for our award winning tabletop wargame Bolt Action, and deals with the German Army of World War II. Within you will find background and details of the German Army’s organisation and equipment from the beginning of the war (the invasion of Poland in 1939) to the very end (the fall of Berlin in 1945).

Central to this book is its Army List. This includes all the information you will need to play games using the German Army. This large list details all the main troop types, vehicles and equipment fielded by the Germany Army during World War II. Alongside this main list are a number of Theatre Selectors, which give the force details for different periods and theatres of the war. These are not definitive, but are designed to give a theatre-specific flavour and character to a force. Over six years of fighting the German Army changed a lot, and many units and vehicles that were common in 1939 were obsolete by 1945 – and there were countless oddities and exceptions on every front. These sub-lists allow players to select forces suitable for the theatre in which they are playing. 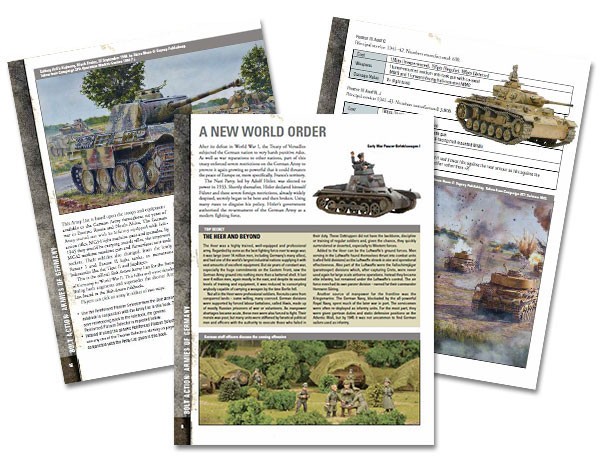 We’ve taken the opportunity to include additional units and options, we’ve revised a few points costs here-and-there, and made some more changes to bring the book more in-line with the rest of the range… here’s a teaser of what you’ll find inside…

German forces now have FOUR Army Special Rules – some of which you’ll be familiar with, some you won’t…

Blitzkrieg – German officers were expected to act on initiative and take decisions on the field based on their judgement rather than wait for orders or confirmation from HQ. This made them very effective tactical commanders and made the Wehrmacht a formidably reactive force.

This offers a bonus for German officers when they use the ‘‘You men, snap to action’’ Special Rule, giving them more influence.

Initiative Training – Even at squad level, in the German army every man is trained with some of the skills of his superiors, and encouraged to show initiative and decisiveness rather than just sit and wait to receive orders.

Hitler’s Buzzsaw –  German-made machine guns, but in particular the lethal MG42, are vastly superior to their enemies’ and rightly feared by Allied infantrymen.

Carried over from the First Edition book, this rule combines with the MG boost brought-in with the Second Edition rules – making German MGs even more lethal…! 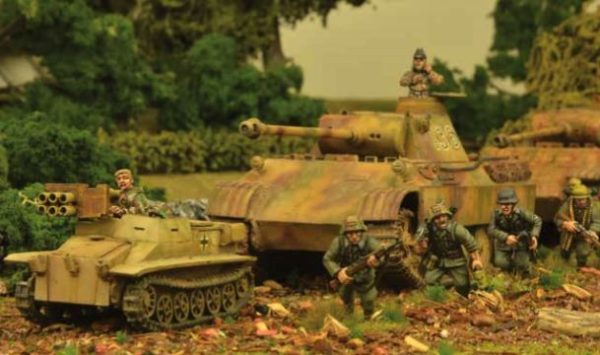 Tiger Fear – Such was the lethal reputation of Tiger tanks, that often Allied troops were spooked by the appearance of any German heavy armour, mistakenly thinking that any Panzer IV was a Tiger waiting in ambush! 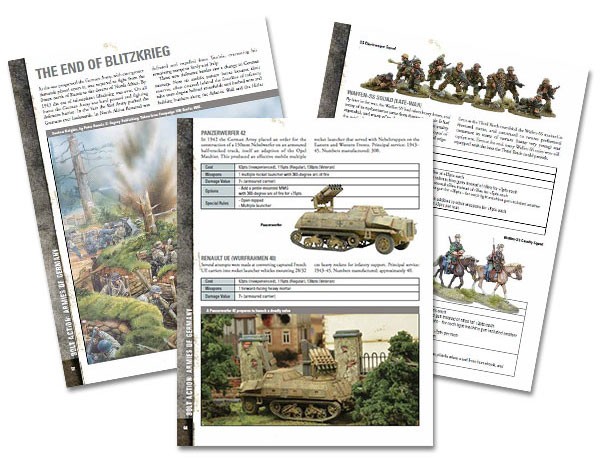 Couple all of this with tactical notes, invaluable historical background text, gorgeous artwork and reference imagery from the masterful Peter Dennis and Osprey Publishing, and Armies of Germany 2nd Edition is the must-have Bolt Action book for all German generals out in the field!

As you would expect we have a fantastic new figure specially made and FREE for those ordering the book direct from the Warlord Webstore – and this time, we’ve outdone ourselves with a mini-diorama depicting a wounded German soldier being helped to safety by a comrade… 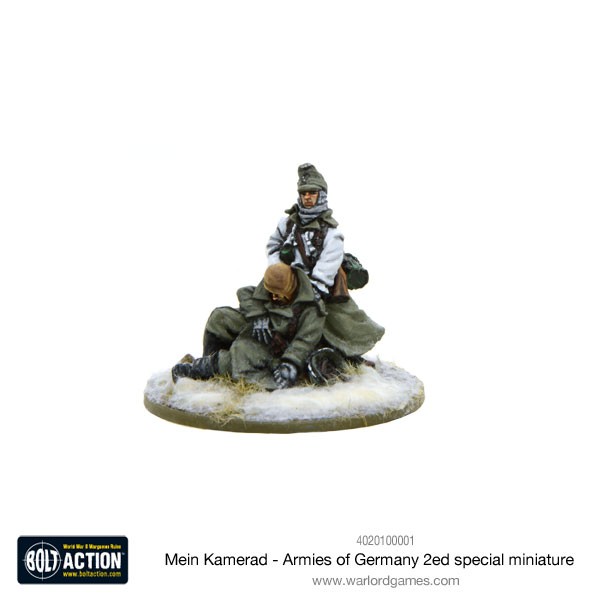 This model would make the perfect Medic Team, or Medic’s Assistant for your Winter German force… 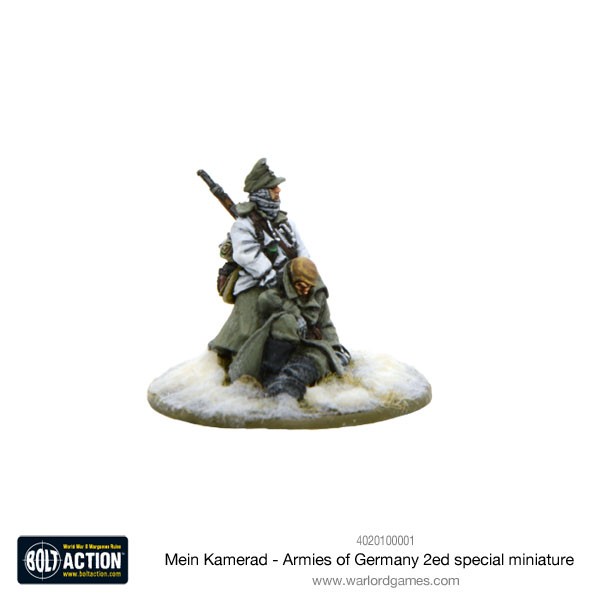 Note that this miniature is available exclusively when ‘Armies of Germany 2nd Edition’ is ordered direct through the Warlord webstore!

If you’ve not yet upgraded to Bolt Action Second Edition, now is the time to get your order placed! The new edition has sold so well that it far exceeded our (already sky-high) expectations… we’re now taking orders for the second wave of stock, which is due to arrive with us in the coming weeks. 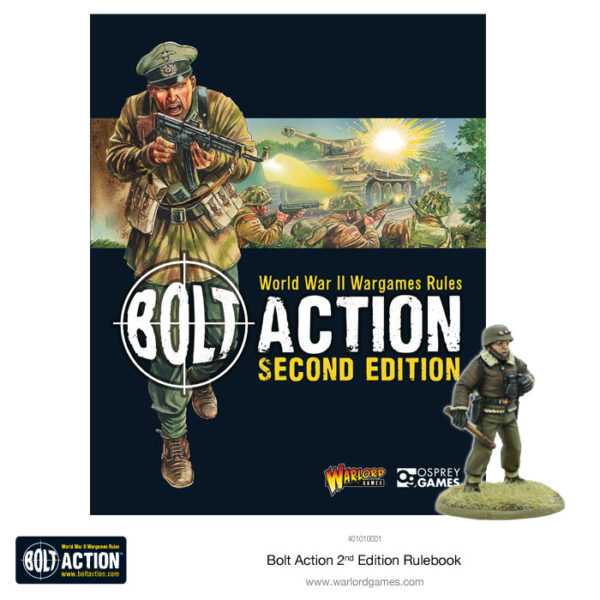 The core rulebook contains everything that you need to get started – including FIVE Army Lists (for the British, German, Japanese, Soviet and US Forces) as well as the complete rules set, a wealth of historical background, gorgeous artwork courtesy of Peter Dennis and Osprey Publishing, and MUCH more inside…

Alternately, if you want to do things in style… pick-up a copy of the brand new Bolt Action Second Edition Starter Set – ‘Band of Brothers’ today… containing a force of our brand new plastic US Airborne miniatures, facing-off against the Germans….

This is the ultimate starter for those looking to begin gaming Bolt Action’ Second Edition – so what are you waiting for? Head over to the webstore NOW!