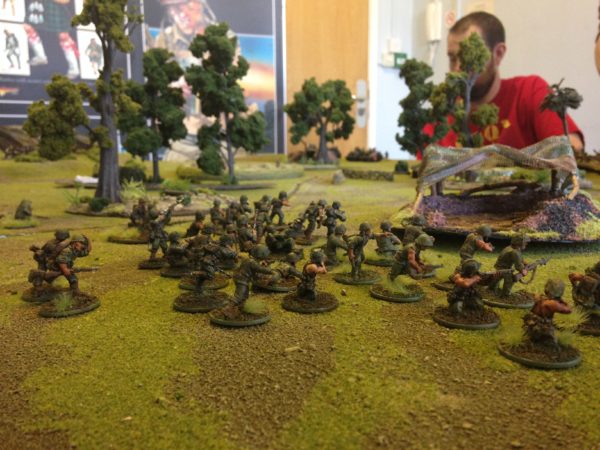 So for the first time we would be getting our armies out for a game. We had taken a few weeks to carefully plan and build our forces to take on all comers and only the dice gods would sort the men from the boys. The table was set and we rolled for a scenario from the main rulebook. It would be Maximum Attrition this time round, a scenario that is all about taking out your opponents units and removing their dice from the pool. To win you had to destroy two more units than you lost.

So here are a few of the thoughts of our players from their perspective: 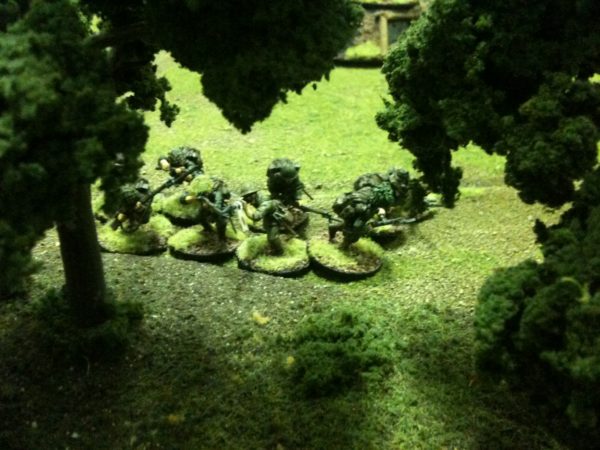 So at long last the point-counting and list building was done, and now the action could start. Instead of a team effort we decided on each of the combatants having a set of dice and in effect four separate game plans! Having set up our initial units as per the Maximum Attrition scenario we started.

The first turn was more gently flirting than steely eyed dealings of death and destruction. Bill was manfully stacking units in his corner, Ches and myself steadily pushed out into the centre and I took possession of a bunker, whilst to my horror Rich brought on a Buffalo! Turn two started with some sporadic shooting with a few Marines dropping.

Turn 3 saw our starting units reinforced and yet another Buffalo breached the undergrowth, by this point the first transport had disgorged its payload and due to a miscalculation (now being empty) couldn’t fire its 30.cals! On my flank we inflicted the first two pinned markers on the second Buffalo, whilst a plucky squad of leathernecks charged my bunker! The ensuing combat left five of my men dead and the marines wiped out to a man. One victory point to me!

From here on, my left flank was put under increasing fire as three USMC squads crawled along under the cover of a 30.cal and sniper. Rich’s officer was taking cover with the reduced 30.cal team and the pin count was stacking up on Buffalo number 2. A moment of inspiration hit me, and I sent my Flamethrower team forward to fire on the beleaguered Marine transport (currently on 6 pin markers!) as it still had two squads including a flamethrower team as badly pinned down as their vehicle (an important point to note: if there are units in a transport and the vehicle is pinned those minuses confer to the individual squads too, so it pays to get out quick!). Sadly my dice rolling was as poor as ever and I only got two more pins on it, but by now neither it nor its passengers were going anywhere.

As my left flank was finally reduced to a panicked MMG team, I pushed the Buffalo’s pin count up to its morale value thus destroying it and the units inside! My sniper put pay to the 30.cal, while Rich’s officer let discretion be the better part of valour and bugged out in the first Buffalo towards Bill’s table edge. With the game now tied and another of Ches’s units about to meet their maker, I decided to fire off the two knee mortars and true to form the shots went wide! My sniper also failed spectacularly to eliminate Bill’s command section and as the night drew in the battered Japanese withdrew into the underbrush to regroup… We will fight on! 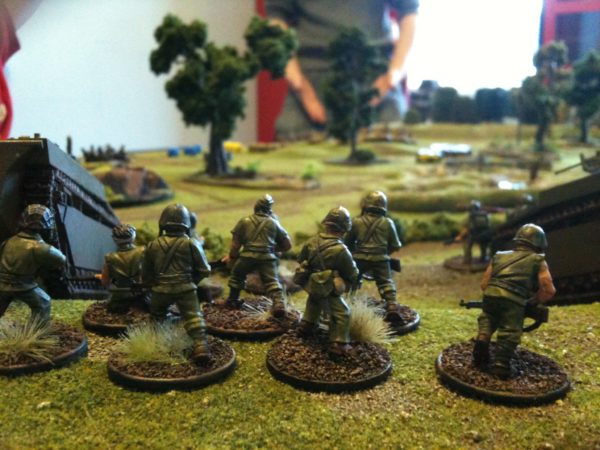 Our opening battle proved eventful to say the least – Lieutenant Alf Stewart and his men paired with those of my colleague Bill to tackle the forces of the Imperial Army of Japan.

I started by gathering my men into the pair of Buffalo Amtracs – each one housed one of my Infantry squads and a support team.

My HQ was kept off of the board to give him some protection – away from the eager eyes of the Japanese sniper teams across the board.

After the initial wave of cross-board pot-shots, one Buffalo broke through a small tree line in front of my deployment area, and a squad poured out, assaulting a Japanese bunker ahead of them – they managed to take-down the majority of the squad, however return fire saw my men removed from action.

Then, by combining firepower, the Japanese managed to pin my other Buffalo – causing the men inside to go down, ducking from the Japanese bullets flying overhead. The bullets continued to fly, and the Buffalo was wrecked – meaning that I lost not only the Amtrac, but also the Infantry squad and Flamethrower team inside – approximately half of my forces neutralised in a single explosion!

My remaining 30.cal team exchanged fire with the Japanese, creating a diversion for my leader – the infamous Lieutenant Stewart – as he single-handedly manned my surviving Buffalo – tearing across the board toward the other Marine force, to safety.

A fantastic game was had by all – the tides turned many times, and much tea was drunk! 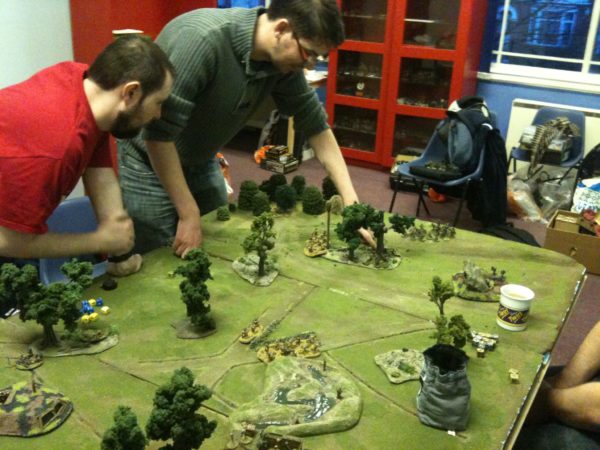 In this scenario half your units rounding up start in the “first wave”, I chose an HMG team as it needed to be set up as quickly as possible and two infantry sections to hold the line and put some pressure on the Marines. The sniper team also set up in a forward position before the first turn.

As the first few turns unfolded the battle seemed to be going well. My Command section moved on and supported the infantry in the centre of the board, firing at the Buffalo on Jonsey’s flank as they advanced. My centre pressed on and the left flank took the tree line and made ready to face the advancing enemy. It was with utter surprise that when the first of the 3 full US squads advanced into firing range they opened up and killed over half my unit in one volley! The rest thought they would hide amongst the trees and refused to hit anything for the rest of the game, dying in the next turn from more withering rifle fire.

The centre unit saw its opportunity at the end of turn 2, using the last dice out of the bag to run at full speed towards the enemy lines. If I could get one of the first dice out next turn they would be able to charge in without the enemy being able to move out the way. And that is exactly what happened, the unit charged into a fresh unit of Marines caught in the open. Surely they would all die to this courageous Banzai! Charge. As it turned out they ran straight into the best reactionary fire I have ever seen, 5 died on the way in. The survivors fluffed their opportunity and only took one soldier down all getting wiped out in return… not what the Emperor expected of me.

From that point things went from bad to worse and I lost almost every even fire fight I entered into. To top it off, my last unit – the MMG team – blundered back into the forest and stayed there for the rest of the game! I’ll get you next time Bill!!

In the first few turns of the game I was reluctant to advance to far forward. The terrain in front of my deployment area was fairly open and I didn’t want to get cut down with no cover. My sniper was placed in a bunker and very quickly proved his skill by taking out the opposing sniper with his first shot. One hit, one kill. From that point on the dice seemed to be oddly in my favour. My forces played a very dominant role in the battle, sweeping aside everything in front of them and only losing 7 men in total in the game.

We came close to an outright win in the last turn but I couldn’t quite get enough fire to bear on the last of Jonsey’s infantry. They would have to wait for another day!

With the enemy on the opposite flank doing very well, the game was actually very close and I’m looking forward to the next encounter. The highlight for me was how well the Fire & Move tactic works for the Marines and I’ll be focussing on making the infantry units more heavily armed as I build the force.  Being able to move and fire the rifles without penalty was definitely the difference between the sides here.

So there we have it, the dust is settling on another Bolt Action game. It really was a tale of 2 battles, the US left flank was gunned down over the course of the game while their right flank advanced almost unscathed! In terms of victory points it was 6 – 5 in favour of the US forces, but in reality the Japanese forces were in tatters.

At 500 points per side it is very clear that as soon as one side gets the upper hand it can quickly go their way.

Next we take the forces up to 750 points. Will we see if any more armoured units come into play…