The North African Brigade of the SS 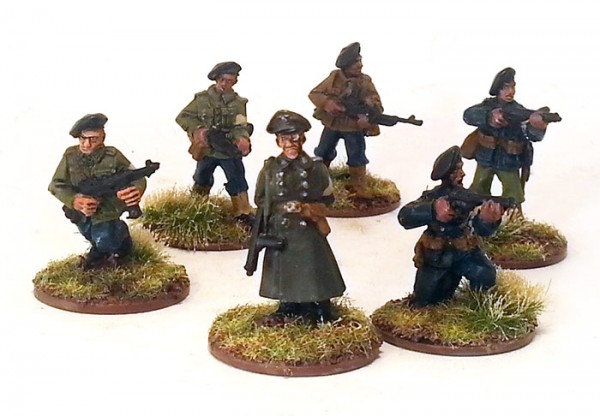 When France was knocked out of the war early on, Arab nationalists in the near east saw the chance to overthrow their colonial masters and many thousands signed up in a variety of battalions and legions to fight alongside the Italian and German forces.

They were uniformed and equipped as their comrades in arms, but with less heavy weaponry and vehicles, some learning to parachute and long-range recce skills. When well led, they performed well, though it seems clear that their hosts were not always trusting of them. They fought in the south of Russia, Greece, North Africa, Sicily and Italy, where they developed their skills in anti-partisan  work, though some units also earned a reputation for brutality.

A unit of 300 was brought over from Africa in 1943 and formed a single over-strength company. The whole character of the unit has to be questioned – there were many ne’er do wells and criminals amongst them, and they had a vicious reputation from their early days, so a war against the tough maquis was always going to escalate the violence.

They were dressed in a mix of French mountain regiment gear, blue shirts, black berets, a mixture of dark blue trousers and jackets, and some militia tan coloured clothes.They wore an armband on their left sleeve saying “in service with the German Wehrmacht”. The strangest thing about them was that they were equipped with British sten guns in the main, and assorted captured Russian weaponry. The sten guns were from captured stocks dropped by the RAF to the resistance, the ammunition was the same as issued to the MP40 sub machine gun. One of the platoons was dressed in standard field grey, and no doubt the rest wore what was available, the supply problems by this time would be starting to bite.

They were led by an SS officer, and used principally as police, clashing many times with the resistance and earning themselves a poor reputation for discipline and charges of murder and robbery, leading to a disintegration of the unit by late 1944.

My interest in them is to reproduce some of the myriad of exotic units that saw action in this truly world war that had 57 countries involved. These guys were a rough and unpleasant bunch, make no mistake, and in Bolt Action should be treated as Untried, or even Shirkers. I cannot imagine them surrendering, however. They had signed their own death warrants by joining a rotten cause.

These models were converted using Belgian Chasseurs Ardennais plus a German officer, with British sten guns (and one bren gun) from the British Infantry kit.